It’s a shame when a game that you see so much potential in, and get so excited for, winds up being a clunky experience that fails to engross you in any way. I’ve been carrying the torch for Zodiac: Orcanon Odyssey ($4.99) for a while now, enamored by its gorgeous looks, the slick interface I saw at my GDC demo, the talent behind the game, and the intrigue behind its pricing model. But with the final product now available, what we’ve got is a turn-based RPG that pales in comparison to other entries on mobile that include a wide selection of classics, and many modern games that carry on the tradition of many of the games that the talent on Zodiac worked on. But thanks to a miserable world, a sloppy plot, and a progression that feels like you’re going nowhere fast, Zodiac is merely skin-deep beauty. 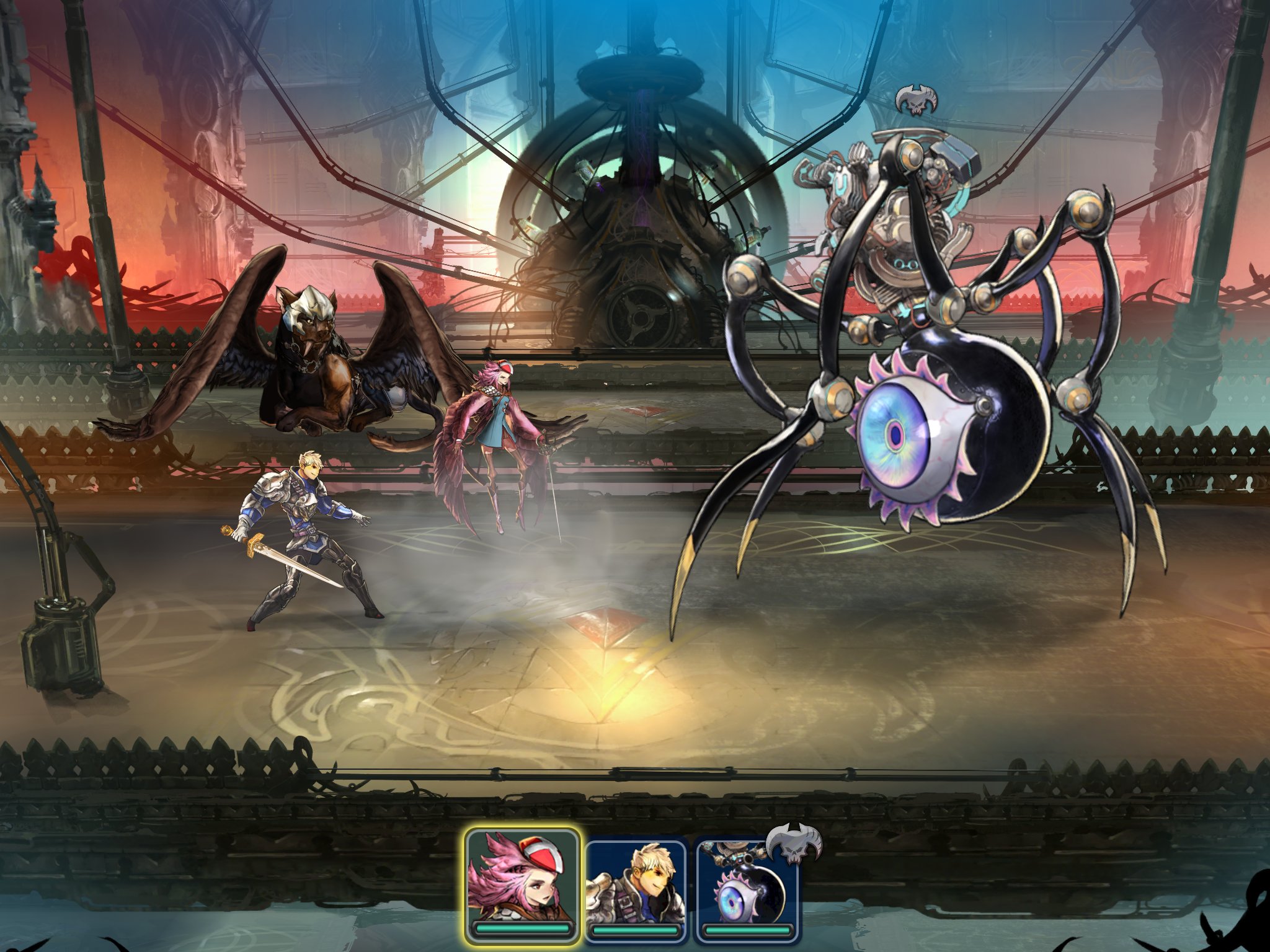 The world of Zodiac can be best characterized as internally, extremely racist. All the races that form the good guys are openly racist toward each other, with the humanoid hyums not being a fan of the bird-people, and the bird-people not liking the big, hairy orsas, and so on. There’s a general dislike and mistrust among all the different races here. But they all hate the lizard-people, and the lizard people hate them. And frankly, the lizard-people are jerks who wantonly murder and eat the Phyltrians, the fish-like creatures with stuttering problems who filter the world’s water. Yes, I too cursed this game when I made the connection. But frankly, the lizard-people might just be reacting to what seems to be some deep-seated prejudice in this game’s world. Like, maybe that doesn’t excuse eating people out of nowhere, but this world’s problems do not begin and end with marauding lizard-folk. It’s fantasy racism, sure, but something about it feels so comically blatant. There’s a humor in that all the races one side hate each other, and only put a modicum of effort into disguising it. Maybe there’s an insightful commentary here, but it’s hard to take seriously when it involves humanoid lizards and bird-persons and there is no subtlety about it at all.

But all this wanton internal racism belies a bigger problem for the player: the game is just so miserable and it does a terrible job at getting you to want to enjoy the story. The hero character (default name Cael) is a blank slate, which isn’t anything new for the RPG genre, but this is a game that really needs a bright, shining hero to really rise above all the mediocrity around surrounding our protagonist. And none of the other characters really make a notable impression whatsoever. They’re heroes, yes, one character has a tragic backstory, but the game does a terrible job at engaging the player with them as anything more than characters in the party, a means to an end for the enemy battle encounters on the game’s levels. At least you get to fly around on a giant flying tiger-like creature named Saber. 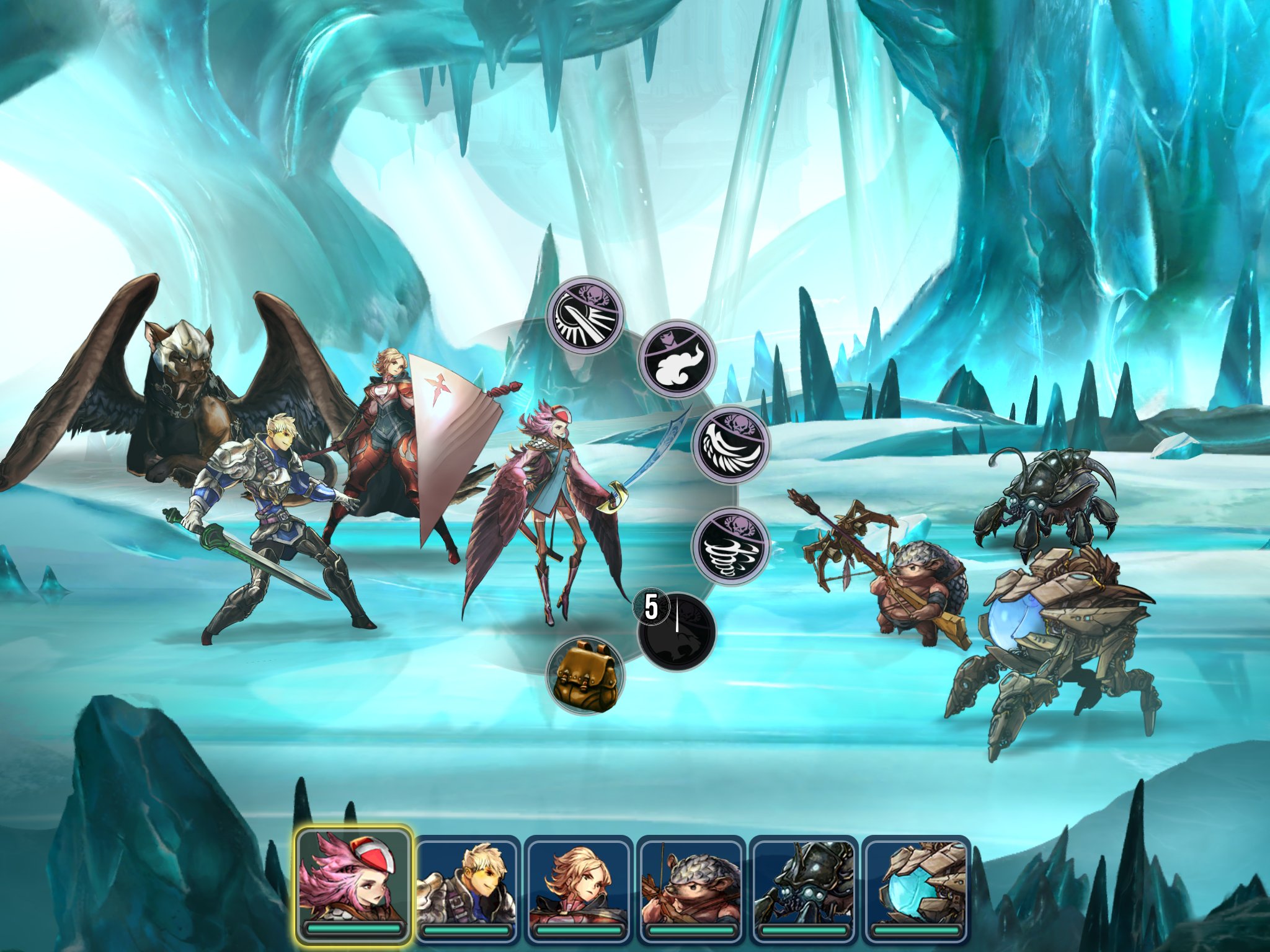 And the storytelling is just rough, in general. Major plot events happen off-screen in what wind up being random cutaway cutscenes that tell you of more interesting things happening. One early cutscene kills off a character we’ve just heard about, and I guess is supposed to be a big moment, but the person alongside her touches a mirror with an object she just got, and I guess this was supposed to be a big moment, but right then, it’s like “Why did I need to see this? Why couldn’t this have happened when the character was introduced and defined as being sick?" And the cutscenes are an odd duck, because while they’re fine out of context of the rest of the game, the animation style which simplifies a lot of character details feels so out of place with the in-game art, which is very, very detailed. Also, the lack of dialogue in the cutscenes just feels weird.

In fact, the sound in general in this game is kind of odd. I’ve been on a bit of an audiophile kick lately, but the default settings for the game have the music very much drowning out the sound effects. I had to turn down the music in the options in order to hear the sound effects, which regardless don’t feel very much in tune with the game. The sound design could have been so much better. 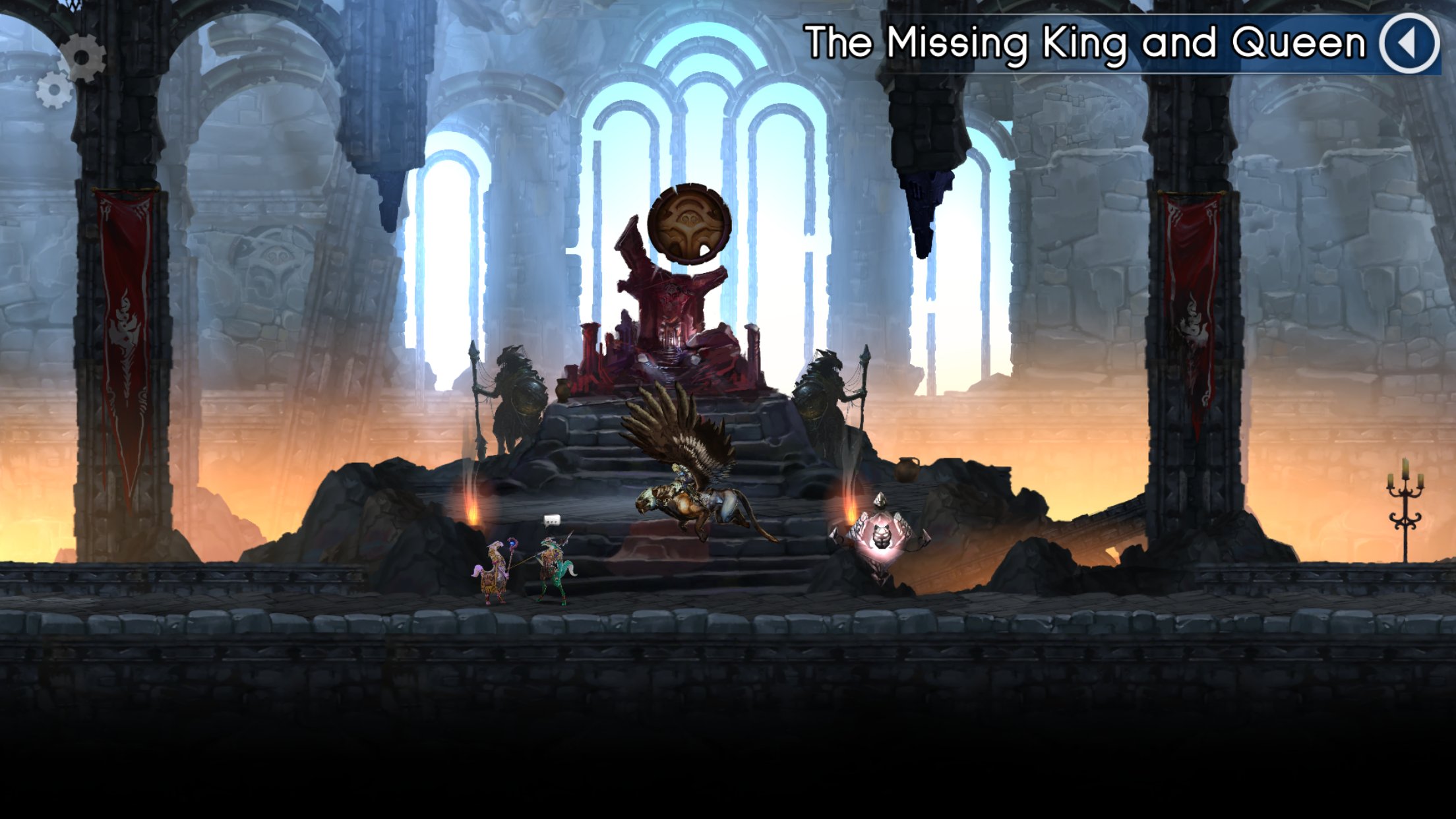 The game was once free-to-play, and you can see remnants of the game’s original business model scattered throughout. There’s a crafting system in the game, but recipes are few and far between; considering you can buy most items you need at a fair price, and the game heaps mountains of gold upon you for the longest time, there’s no real need for all those materials. You have a massive inventory, and no good inventory management system for all the junk you collect. Even the Easy/Normal/Hard structure of the dungeons is something out of a free-to-play game, but it sure does feel like this shifted direction late and fast. Which is good, honestly; this feels a lot more like it should be a paid game.

I’ve been very excited about this one for a while, but I think despite all the talent behind the game, it just never comes together. Nothing feels like it’s of consequence. The story hints that there’s more going on outside of your actions, but it literally has to show you what’s happening. You fight enemies, their looks not really belying which is tougher than the other, and randomly getting stronger as time goes on. But exploring the levels isn’t much fun when the level layouts are bland mazes with no maps, and the NPCs have nothing interesting to say. There’s little reason to talk to anyone that doesn’t have a special icon above their head. You can just kind of trudge on with your mission, which more often than not is “get to the end, fight this boss, repeat ad nauseam." 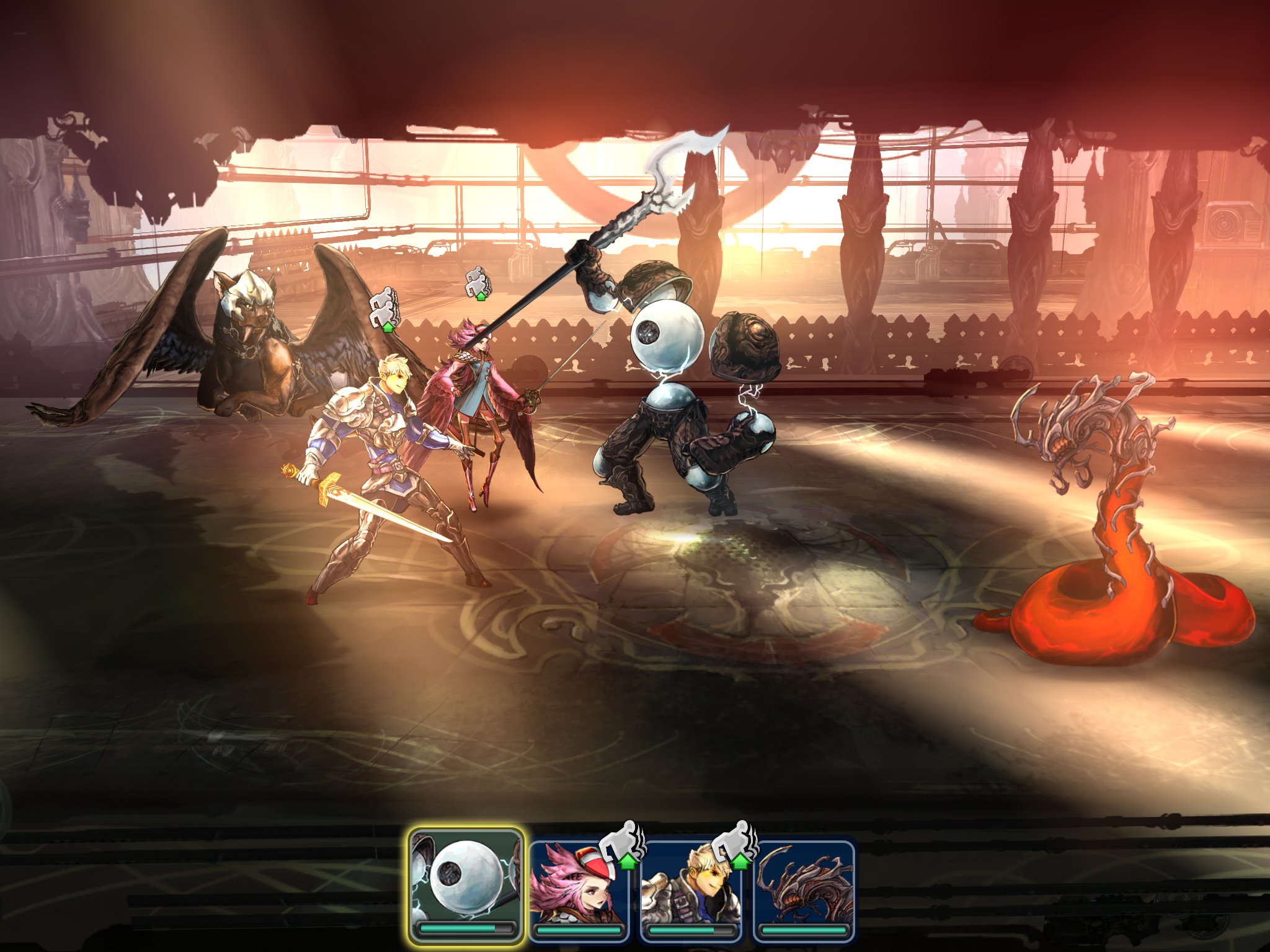 The combat is a strength, if only because the wait timers make for a smart replacement for magic, and forcing you to deploy your abilities with their side effects wisely. Even the game’s Zodiac system, which lets Cael change between classes mid-battle, is smart, because it encourages you to switch often with the only penalty being that Cael moves to the end of the turn line for this round. So, while that is a disadvantage, you can still jump between classes as you may, using abilities from one to another, if you so wish. Each class has their own stats, job, and upgrade tree, and my only wish is that the game introduced all this sooner, because as you’ve figured out how your base 3 characters work early on, the game doesn’t introduce new elements fast enough. And the game promises a lot more than it’s offering right now. While this seemed to be the plan for the longest time for the game to add new content after release – future story was already written back at GDC – it’s important for a big first release to have enough to satisfy its players. But this winds up being a real trudge through boring events for the longest time, and frankly, many people are going to give up and find better things to do with their time before hitting any point where they’d be ready for more. There are so many more RPGs with actual characters to care about, and interesting stories throughout, and many of them are on iOS! Go play those games!

It’s just all disappointing because Zodiac‘s such a gorgeous game. And the interface in combat is super-slick. And the Zodiac system is really cool to play with. But what Zodiac: Orcanon Odyssey fails to do is to make the player want to keep playing it. It fails to capitalize on the strengths it has, preferring to draw itself out into a boring trudge rewards you with too few bright spots over far too long of a playing time. I was really excited for this game, and hoped it would be good, and it pains me that this one was a clunker.