A lot of people still say shooters don’t work on touchscreen devices, but over the years I’ve warmed to them pretty nicely. Sliding your greasy fingers around on a piece of glass will probably never have the same precision as a mouse and keyboard, but on some games I don’t even use a controller anymore. Yes, first- and third-person shooters have certainly come a long way on iOS, and in my opinion Afterpulse (Free) is one of the better recent examples.

As I said in our review, part of what makes it work so well is its simplicity. With only two modes, a handful of maps, and no fancy dance moves like crouching, jumping, or taking cover, it’s just about perfect for quick, on-the-go murdering. However, just because it’s easy to dive into doesn’t mean there aren’t a few tips and tricks that will improve your game and help you navigate the free-to-play stuff.

One of my main complaints about Afterpulse in the review was that it’s a bit generic in a lot of ways. The good news is, that means that most of the same skills apply as in traditional shooters. Such as…

– Headshots! If your weapon is precise enough, get in the habit of keeping your reticule at face-height (or just under) while you run around, and try to keep your firing as centered as possible. Shots to the head aren’t always one-hit-kills in Afterpulse, but they definitely do more damage. 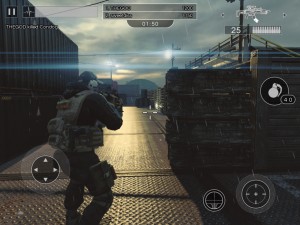 – Run and gun! Don’t be a sitting duck. Be a flying… condor. Or something. Basically, pretend you’re the hero of Temple Run (Free) and there’s someone chasing you. Because there probably is.

– Strafe! This goes along with that last one. When in a gunfight, make yourself as hard to hit as possible by sliding back and forth on the left stick. Just be sure to keep your aim as steady as possible.

– Reload! This may be the most important tip on this list, and it’s the one that first inverted my KDR when I was a wee lad. Never, ever be caught reloading while in a firefight. Especially in Afterpulse where you have unlimited ammo, you should reload as often as you are safe. You always want a full magazine at the ready.

– Take advantage! If someone else has to reload while shooting you, go in for the kill! You’ve got a second or two where you don’t have to worry so much about dodging around and whatnot. Make it count before they start firing again! Also take advantage of any situation where the enemy doesn’t know where you are (like right behind them). The maps may be tiny, but they are usually pretty full and there’s no radar to give you away.

The timers in Afterpulse are some of the friendliest I’ve seen in quite a while. There are basically two that are supposed to limit your playtime (and pressure you into spending), but luckily they are pretty easy to get around.

In the Training mode you’re just fighting against bots instead of real people. It’s a good place to practice before jumping online, as the enemies tend to be much easier and you don’t have to wait between matches. Except, of course, when your energy runs out.

You’ll usually have enough for at least three matches before you’re forced to wait, but it’s not as bad as it sounds. First of all, it fully recharges every time you level up (which happens a ton when you first start playing). Second, you often win more energy as a reward for playing. And finally, once you do run out, you can just hop right into an online deathmatch for free and play as long as you like. 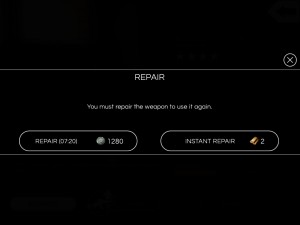 Okay, maybe not literally as long as you like, but pretty close to it. Afterpulse uses the same system Real Racing 3 (Free) does, in that every match will damage the weapons you take with you into battle. Why, eventually they’ll be so darn banged up that you’ll have to repair them! Luckily, repairing them doesn’t cost very much. Unluckily, you’ll have to wait while they do repair. Luckily, you don’t have to wait that long. Unluckily, the weapon you take will get damaged even if you don’t fire them at all. Luckily, you’ll quickly amass a ton of weapons and you can easily switch to a different pair and keep playing pretty much forever. Not too bad, right?

Like many free-to-play games, Afterpulse has two currencies: cash and gold. And we should count ourselves lucky, as I’m pretty sure I’ve seen as many as six or seven currencies in other games. Yeesh.

This is the game’s soft currency, which you’ll use for most day-to-day stuff like repairing your weapons and upgrading things. It seems to be quite plentiful, as right now I feel like I have way more than I could ever spend (which, sadly, is the exact opposite of my real life). You’ll earn this currency mainly by completing missions and playing in the Training mode. (Multiplayer will give you some, too, but not nearly as much.)

This is the game’s hard currency, which is used mostly for speeding up timers and buying premium stuff in the shop. Yes, like most free-to-play games, gold is the wrecking ball that busts through all the brick walls keeping you from having fun. Fortunately, as with cash, it’s not terribly rare and the things you’ll want to spend it on aren’t that expensive anyway. 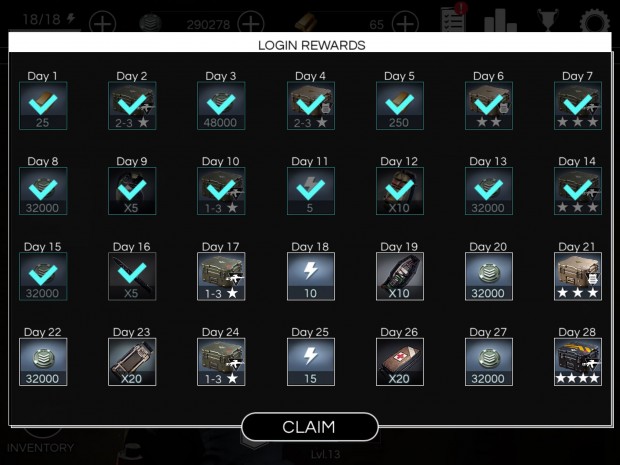 In fact, pretty much the only things I spend my gold on are the premium crates that guarantee four star weapons and gear. These come in a variety of little bundles that include extras like grenades and cash, but personally I just choose the cheapest since all I want is that gooey four star item at the center.

Gold is basically showered on you right at the beginning of the game, as I’m pretty sure just by downloading it you get a bunch. But once that dries up, the best way to earn gold is by completing all four of the daily missions since that nets you 20 gold every single day. You also get gold from the Daily Login pop-up and just playing matches.

There is a pretty huge amount of weapons and gear in Afterpulse spanning lots of different classes and ranks. It may sound cliché, but what’s best really does come down to personal preference. I’ve killed (and been killed) by pretty much everything. Do you want something with good range? Try a sniper rifle like the RS-300. How about something really quick? The PPM-19 is a solid choice. My go-to at the moment is the AC 30 Nightcrawler I won in a special Halloween crate. 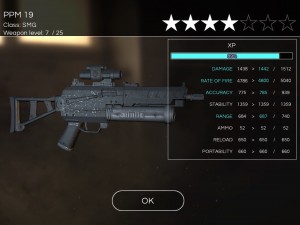 I’ve found that choosing the “right” secondary weapon is nowhere near as important (unless you are lucky enough to snag a rocket launcher or something). You don’t really need a back-up weapon since you never run out of ammo and reloading is pretty quick across the board, and most of the handguns pale in comparison to the primaries. Again, it’s just personal preference what you go with. Personally, I don’t use the secondary much in this particular game.

Gear is much simpler to choose. Basically, each cap, jacket, and pair of pants has only two stats: movement and armor. Do you wanna move fast or be able to soak up more bullets? Most items also have a bonus ability, like “+15% protection against Assault weapons” or “-10% cooldown on grenades”. What fits best with your play style and weapon choice?

There are three categories of missions in Afterpulse: Style, Training, and Daily. You’ll get cash or gold for doing things like “Kill 6 enemies in less than 60 seconds" or
“Get 20 headshots using an Assault weapon", so they can be a great way to fill your coffers.

If you want gold in particular, though, Daily missions are what you should focus on. You’ll get an extra 20 gold each time you complete them, and there are only four: Power up a weapon three times, acquire three new weapons, use 15 energy in training mode, and repair your weapons a certain amount. These things are all super easy to accomplish, but there are ways to complete them even faster if you only have time to check in briefly. 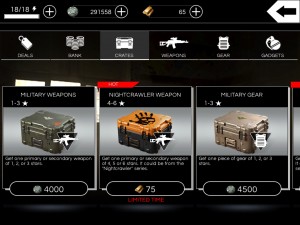 Here’s what you do: Go into the shop and buy three “Military Weapons" crates at $4,000 each. This is cheaper than buying the individual weapons (at $6,750 each) and much faster than acquiring them from matches. Next, use those new cheap weapons to power-up your favorite weapon, making sure to do them one at a time rather than all three at once. After that, jump into three Training matches, and then quit them. You still use up 15 energy even if you didn’t actually play. Next, do the same thing with the Multiplayer mode. Jumping into and out of four matches should degrade your weapons enough for the required repairs.

While the above method is a much faster way of completing your dailies, though, I definitely don’t recommend doing it unless you really feel like you have to for some reason. Keep in mind that quitting online makes it less fun for everyone else, so don’t make a habit out of it. Plus, what fun is the game if you’re not even going to play it?

Afterpulse is easily one of my favorite shooters to hit iOS in a while. It doesn’t try anything new, but what it does do is play perfectly to the strengths of mobile devices. Above all, it’s just dumb fun, and I hope this guide will help you get the most out of your gold, cash, and time. Happy man-shooting, everyone!