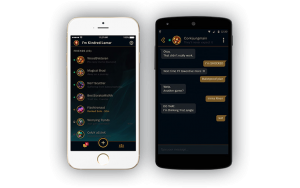 League of Legends is a free to play MOBA that’s also the biggest PC game in the world, by a large margin. It’s one of my favorite games, and one I’ve somehow spent thousands of dollars on over the years. (Skins = wins, right?) One thing that has always bugged me about League of Legends is there’s never been a great way to know when your friends want to play short of them just sending you a text message. But, if you’ve got friends in game, who don’t have your phone number, you’re sort of out of luck.

There’s third party solutions like LoL Connect , but they really don’t work that great, and have only gotten more janky over the years. Well, there’s good news on the horizon, as part of Riot’s 2016 season update is news of an official app that sounds amazing:

Connect With Friends Whenever, Wherever

Use the League Friends app to hit up your buddies for a match any time they’re available—even before they’ve booted up their rig. The app syncs your conversations from any device, so you can keep up the team trash talk long after smashing the enemy nexus.

It’s a lot easier to organize your team games when everybody is online. Optional push notifications ensure that you’ll get the message when your squad feels a late-night itch for a 5v5.

The app will be available early next year, and I totally can’t wait. I’m going to play way more League if I’m getting push alerts when friends are looking to play. Oh, and if you’ve got no idea what LoL is, check out this video: