One of the things that is unquestionably better about PC and console gaming than mobile gaming is save game management. If you have progress in a game you want to back up to ensure that it’s never lost, you’re in the golden era of data protection. Consoles give you a decent set of options to protect your games, even if you delete your games from your hard drive, and even supporting cloud saves in many cases. And on PC, you can always hunt down the save files on your hard drive, and Steam Cloud works pretty well!

Compare this to iOS, which was bad enough before Apple decided to shut down access to each app’s sandbox through third-party tools like iFunBox in iOS 8.3. I often like to restore devices to a clean state, then reinstall games with their saves outside of the traditional iTunes/iCloud backup process. iCloud support in apps works better than it once did, I suppose, but “something goes wrong" is still the unofficial motto of iCloud saves, and it’s far from a standardized feature even years after its introduction.

Thankfully, there is a tool that can help you out with backing up and transferring your save games, and it’s called iMazing. A Twitter friend gave me a license key, and I found out just how useful this is, especially in this era where Apple is actively shutting down the ways that we have to archive our data. 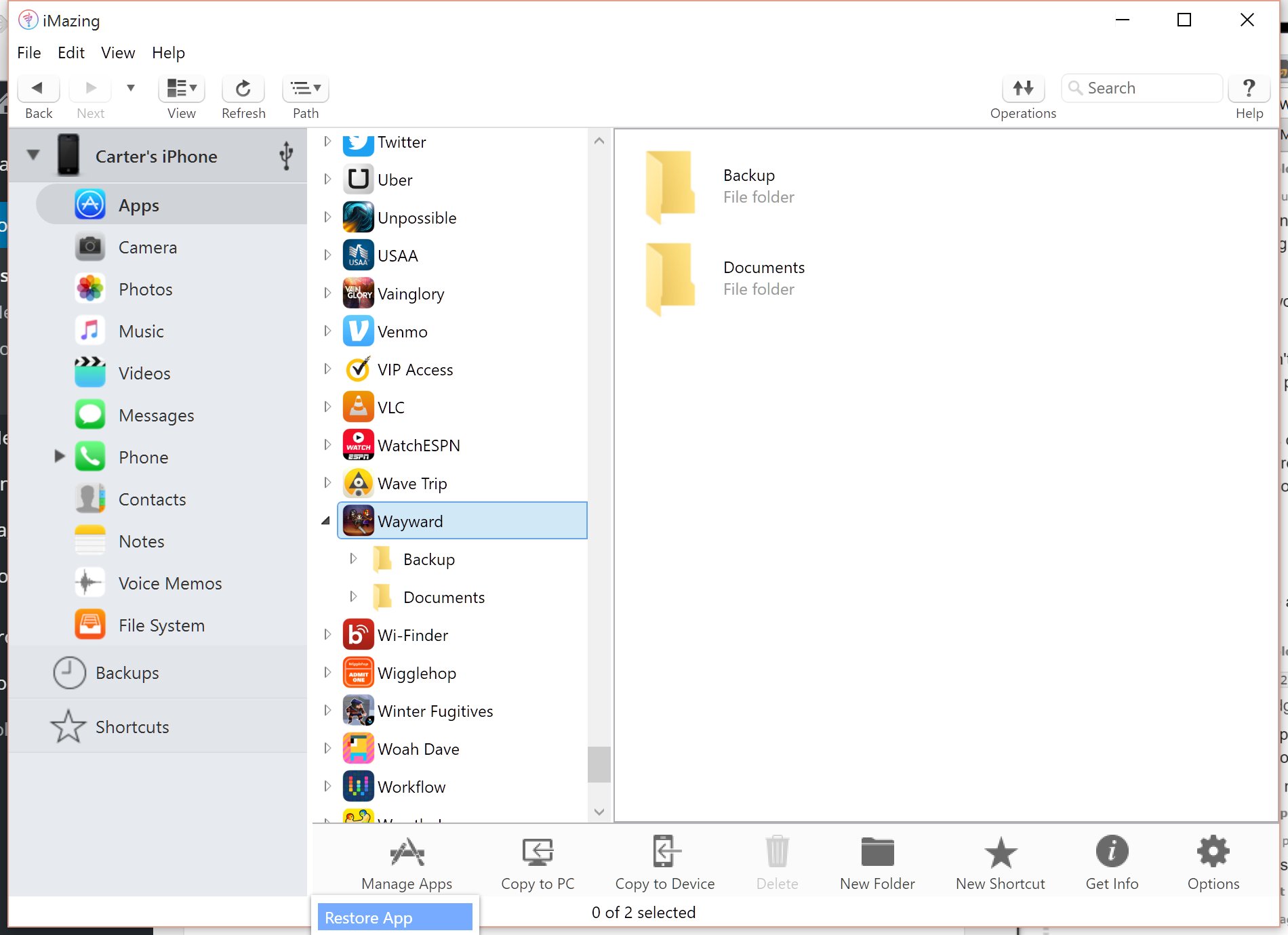 How does this magical technology work? By taking advantage of one of the few things that developers apparently still have access to, which is device backups and restoration processes. Whenever you try to backup an app in iMazing, it has to backup the entire device at once to your computer; what it’s doing is that it’s sourcing that backup that you’ve made on PC for the files, which it then handily packages into an .imazing file. What you do is then plug in your device that you want to transfer the save file to, back it up, use the “Restore App" function, choose the .imazing file, and then iMazing will restore your device with the app’s new save file. This isn’t as long as a full restore, through whatever mad science they’re taking advantage of, it does a partial restore of only that app’s data, so it’s not a lengthy process.

It’s supremely clever, and it works. For example, I was able to transfer my Pac-Man 256 (Free) data from my iPad Mini 2 where I spent most of the time playing the game, to my iPhone 6 Plus, so I haveall my unlocks on there. Neither device is jailbroken currently, but if you have a jailbroken device, iMazing can work with it. 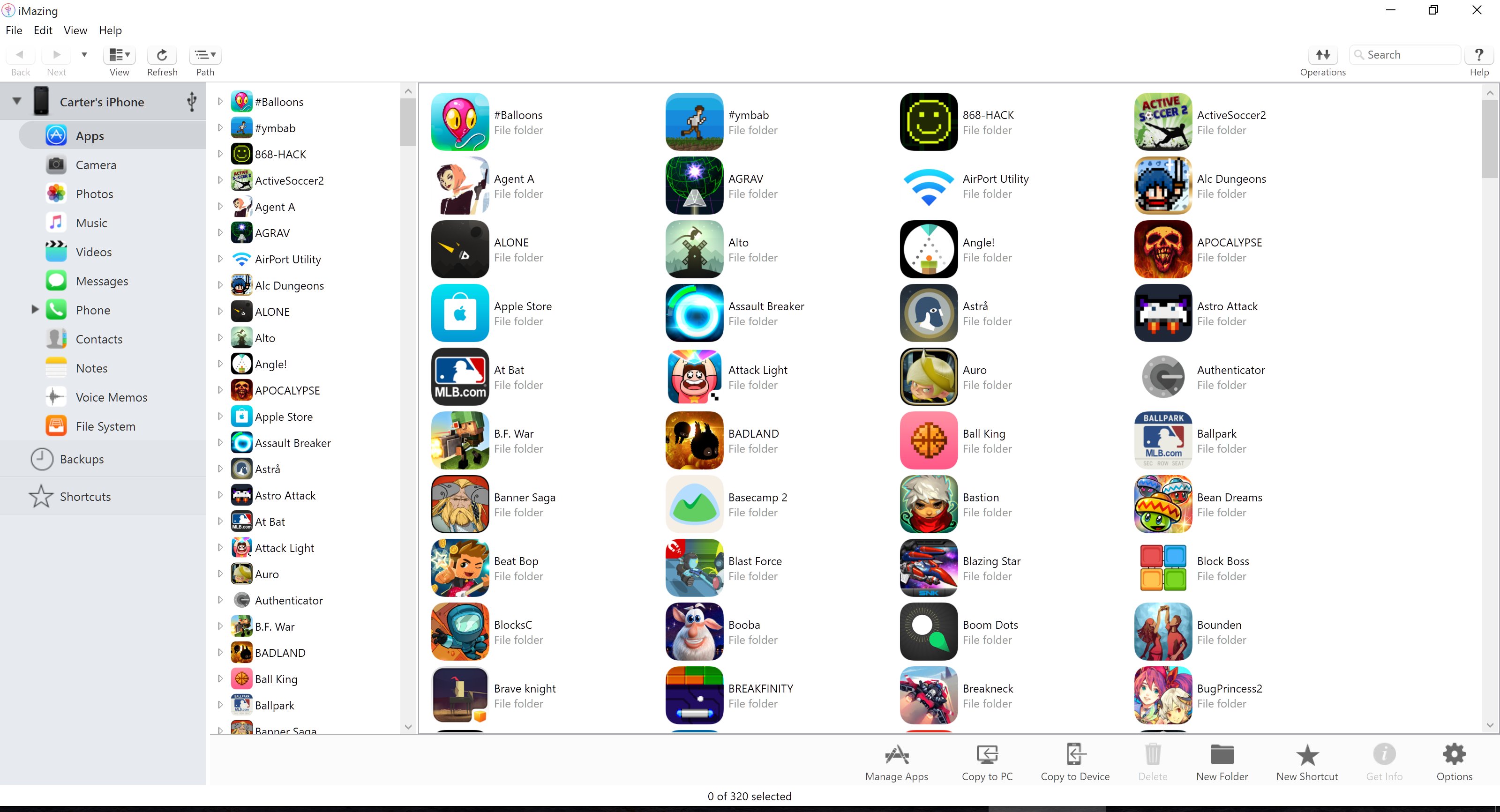 Naturally, this is a bit of a clunkier experience than using iFunBox or some other tool was pre-iOS-8.3, because you have to go through that backup to computer and restore to device process. This is not iMazing’s fault, this is just how this has to work now. Even in the era of sandbox access, packaging the files up like this into one file is a lot simpler, anyway. Needing to turn off Find My iPhone to use the feature is annoying, because it’s easy to forget to turn it back on, so it’s a potential security risk. However, Apple requires you to turn it off in order to restore a device through their official methods for whatever reason, so it’s not iMazing’s fault. You also can’t backup IPA files as you could before iOS 9, but Apple doesn’t really let you do that even from iTunes now, so, y’know, pretty much any deficiency or annoyance of iMazing isn’t really their fault. It’s just Apple deciding to make your life more difficult for daring to have any form of control over the expensive hardware you own.

Also, do note that this isn’t guaranteed to work with backing up and saving game data for everything. Some games might save to cloud and not to the device backup file, or be dependent on something that the backup process doesn’t have access to. In general, for most games? iMazing (and the old file backup process) will work. But you’re still praying a bit that it will work. The joys of backdoor methods are infinite.

What’s cool is that iMazing can also actually backup and restore your device entirely, not just selectively, so if you would rather use something where you have access to the backups without using the always-awful iTunes, here you go. You can back it up to the standard iTunes backup process that iMazing uses, or to a separate .iMazing file that contains your entire backup, and can be backed up to external hard drives, for example. More control! It also gives you access to phone, messages, music transfers to and from your device, and more. With iMazing, you can avoid iTunes for everything but downloading apps to your computer, which is a good idea since Apple doesn’t really care one bit about archiving and ensuring that third-party software doesn’t horrifically break across even different point releases!

My grand fear is that iMazing gets shut down by way of Apple deciding that users shouldn’t have access to app backups at all any more, because clearly users have too much power and control of the things they do and buy on iOS devices as it is. Time to rein it in even further. Apple’s reputation of letting power users do what they want is a rough one, especially considering that they don’t necessarily guarantee that if they shut down a third-party backdoor, there’s a suitable first-party solution. There really isn’t for save archiving, Apple hasn’t put in the effort for gamers, because they don’t care about games enough. 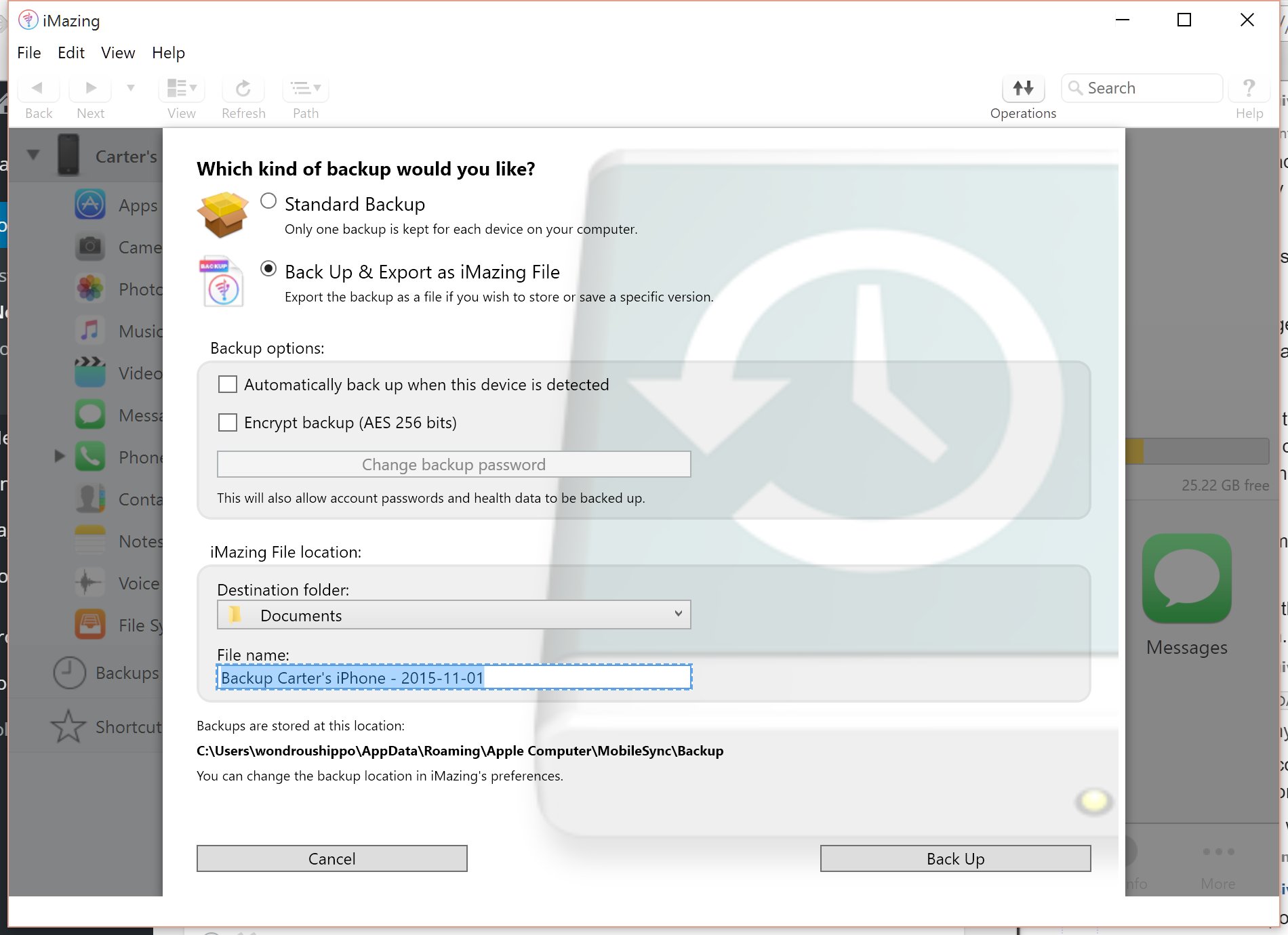 But still, while I would sit around in fear of any iOS update coming to take what little advantage against Apple’s systems away from you, iMazing does exist and work for now. I got it for free from a friend, so I guess it would depend if that $34.99 for backup access is worth it for you, but hey: iMazing delivers on what it promises. They’ve also provided a discount code for TouchArcade readers: using the code TOUCHARCADEISAMAZING when you check out will get you 20% off until November 30th. They also have a trial version you can try to demo some of the features, see if it’s right for you. If only there was some kind of word, preferably a pun on the title, that I could use to describe the quality of its functionality.