When a game has been revealed to be developed by one of the artists behind Monument Valley ($3.99), it has quite a lot to live up to. That game is an outstanding puzzler, but I’d wager about half of its appeal is the unique, wonderful visuals. It won a ton of awards and recognition–deservedly so–and I don’t envy artist Jonathan Topf for developing what could be seen as a followup of sorts. Sure, Monument Valley and his first solo outing Trick Shot ($1.99) don’t have much in common, but they are both puzzle games in their own way. And, of course, they’re pretty good lookin’.

The thing you’ll notice when you fire up Trick Shot for the first time is just how minimalist everything is. You’re immediately presented with a simple box and a small area with dotted red lines, all against a blank grey background. When you drag your finger in the dotted area, a ball appears with a line through it. Let go and the ball is fired, hopefully into the box. The line that appears through the ball represents the angle and power of your shot, and a ghost of your last attempt always remains to help dial in your next one. 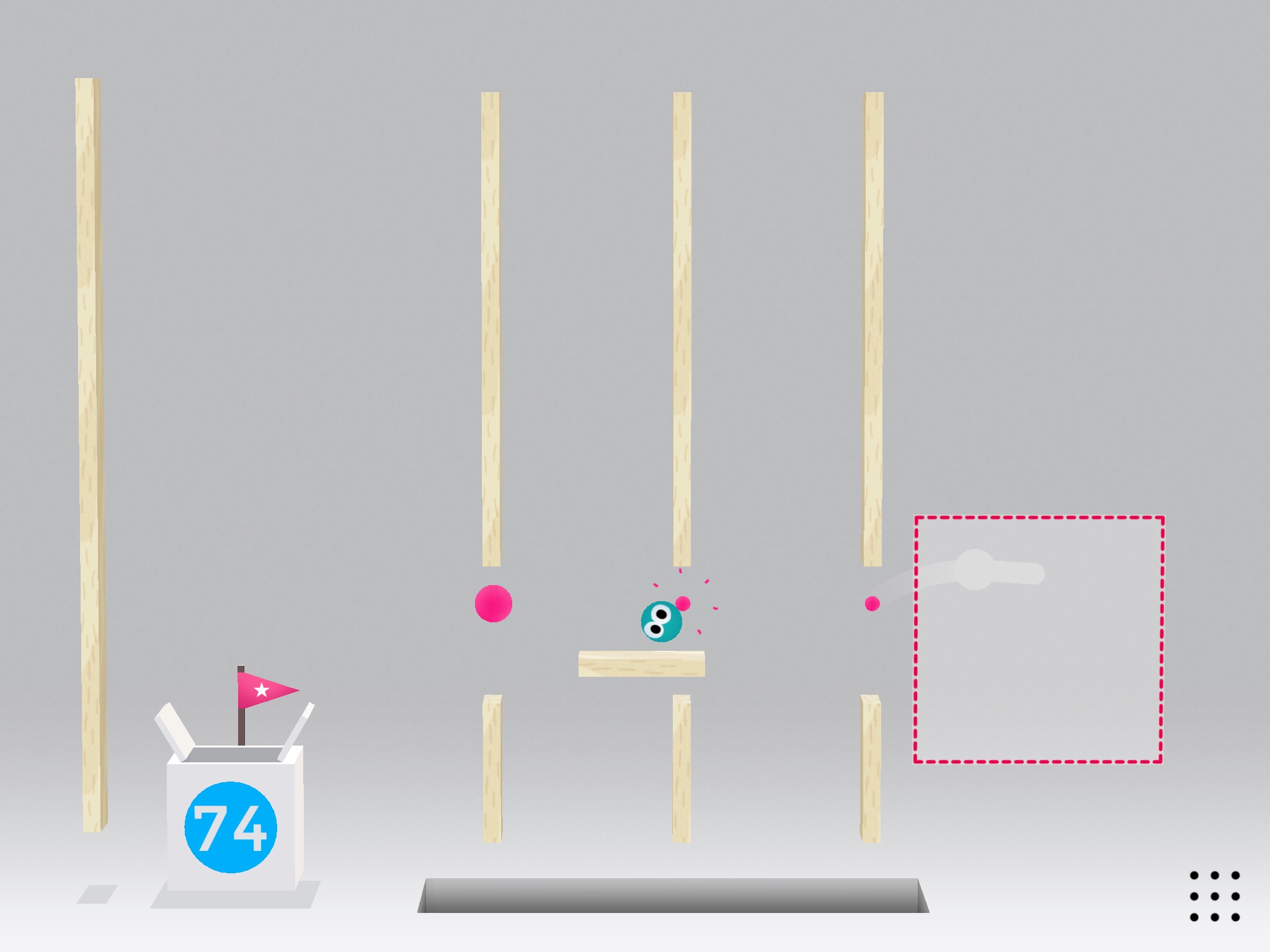 And, well, that’s pretty much the whole game in a nutshell. You fire your ball into the box. If you fail, you try again. If you succeed, you move on to the next box. Sure, there are obstacles that get progressively more difficult to deal with, like wooden planks, fans, and teleporters. But in general you’re just bouncing your ball off of one or two things and hoping it goes into that box. When the mechanics are laid out on paper it may seem pretty simple and dull, but let me explain why it’s not.

See, we’ve all played games that have a few fun mechanics but look like garbage. You recommend it to your friend and they’re like, “This game? Uh… I don’t know.” And you’re all like “Dude! Just try it! It’s better than it looks!” Well, Trick Shot is the inverse of that. The gameplay (while fun) isn’t particularly original or deep, but the overall presentation of the game is so cool and smooth that it makes everything else about it feel way more compelling.

I’ll rattle off a few examples: I love how easy it is to play each level, with a simple swipe up or down to switch between the previous and next stages. I love how the ball changes each time you use it. I love that there are no penalties whatsoever, meaning you can just keep firing shot after shot until you get it right with absolutely no stress. I love the way it cleverly introduces a new way to play once you beat the game the first time around, without adding a new “mode” (and still allowing you to play the old way). I love that the level select screen is simply color coded so you can see at a glance what you have left to accomplish. And, of course, I love the visuals. Flat, rounded, modern, and utilitarian. It’s just a joy to play.

Trick Shot is not the most unique physics-based puzzle game I’ve ever played, or the most challenging (by a long shot). But it is nonetheless one of the best I’ve played in a very long time. It may be a case of style over substance, but only by a hair, since the game is quite fun even without the slick little animations and beautifully simple aesthetic. (It’s so simple, in fact, that part of me wishes it had a level editor to make your own creations–though another part of me recognizes that that would compromise the game’s purity of vision.) It may seem like a fairly basic package overall, and I suppose it is, but what’s there is really damn good–and easily worth the current two dollar asking price.