It feels like it’s been forever since Super Evil Megacorp released a new hero for its mobile MOBA, Vainglory (Free) (in all reality it’s only been two months). Thankfully, that all changed with the launch of Version 1.8, which brought with it the debut of Skye, the latest hero to hit the Halcyon Fold. While she’s pretty difficult to use, she also has the capability to be an incredibly rewarding addition to any team. We’ve been putting her through her paces during this ICE-only launch week and have compiled beginner’s guide for folks wondering if she’s right for them.

Before we get into some of the tactical considerations of Skye, let’s provide a brief overview of her traits and skills. Broadly classified as a ranged assassin, Skye’s emphasis is on mobile superiority combined with high damage abilities. She’s going to need both because her sustain is almost on the same level as a Mage (meaning she won’t last very long in direct combat). 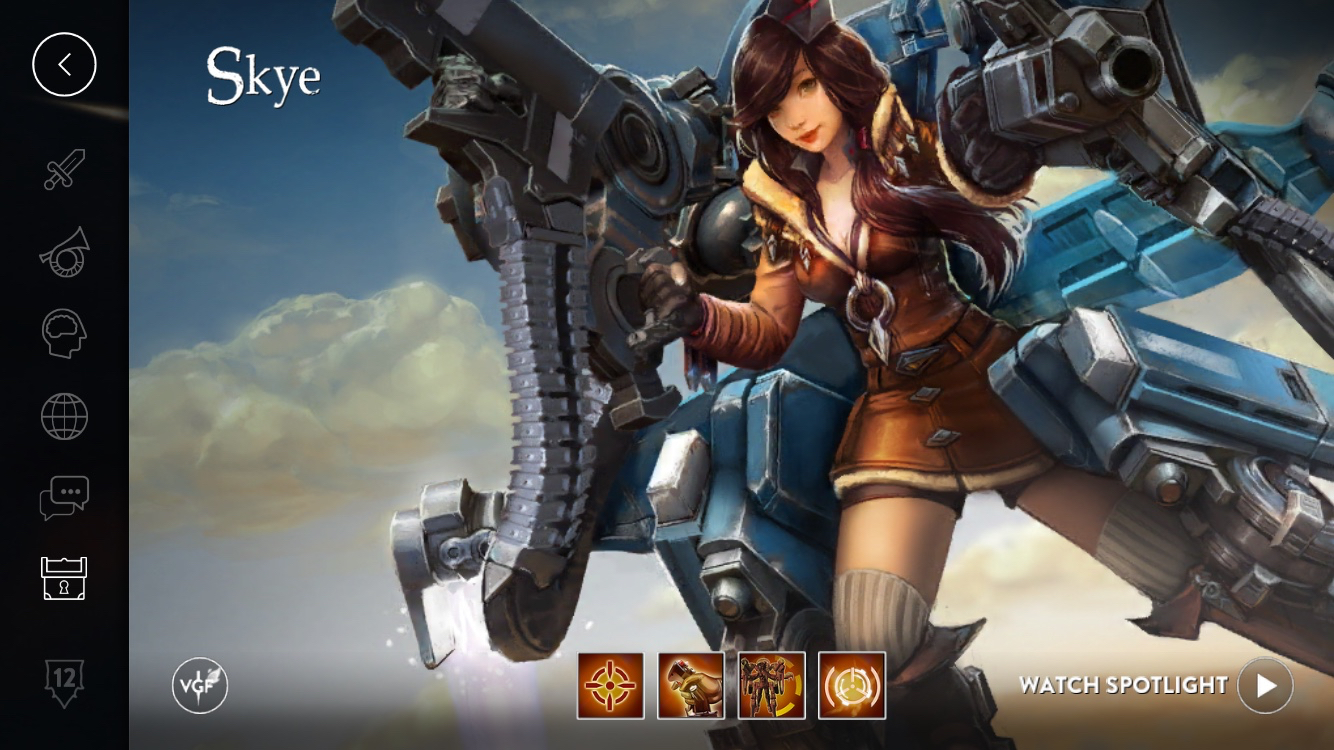 Skye’s Heroic Trait is known as Target Lock and it puts a crosshair on the target that she most recently attacked with her basic attack. Heroic Lock does two things: First, it allows the use of two of her three abilities as they require a lock to work. Second, having Target Lock bestows a speed boost for Skye whenever she does a basic attack or Forward Barrage (one of her abilities we’ll get to in a moment). This speed boost is important as it’ll allow Skye to quickly move in or around an opponent to get positioning (the boost also helps when moving backwards but the bonus is much smaller). Obviously, players of Skye should strive to have Target Lock on at least some enemy that’s within range i order to keep the speed boost active.

The first of Skye’s abilities is Forward Barrage, which is the only ability that doesn’t require a Target Lock to use. Tap in any direction and Skye starts firing her guns for a few seconds. Skye will continue to fire in that direction for the duration of the ability and while she can move, she can only strafe, so proper aiming is essential. As I mentioned earlier, Target Lock isn’t required, but if you are landing damage against your targeted opponent, Skye will do 125% damage (meanwhile she only does 75% against non-hero baddies). Forward Barrage has excellent utility as you can either use it in the middle of a firefight against a targeted hero or you can potentially use it against an opponent that’s chasing you down (assuming you have enough health to deal with them). The most important thing to keep in mind is that Target Lock is required for it to be very useful and proper initial aim is needed to make strafing useful. 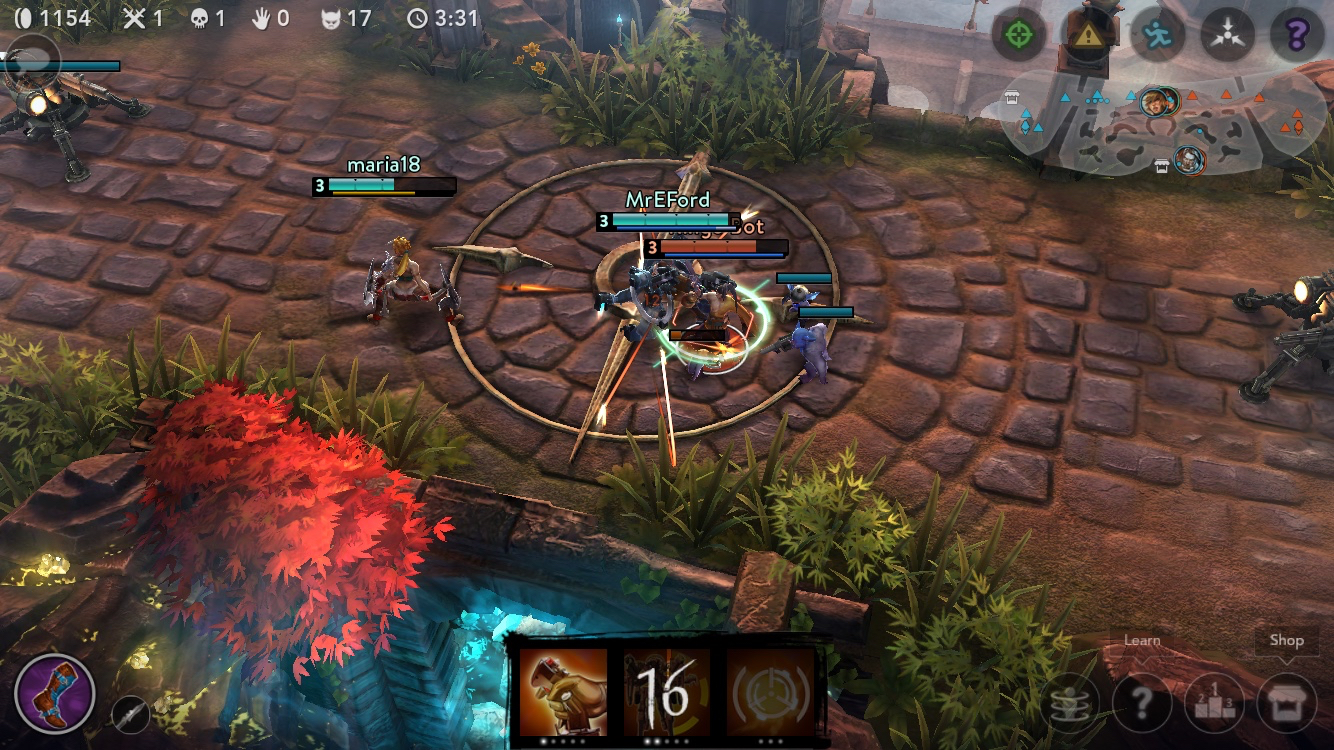 Skye’s second ability is Suri Strike and is an excellent ability to chase down an opponent while doing some damage. Skye can launch the attack near the location of her locked on opponent. Once she executes the strike, she quickly jumps to the location and launches a volley of missiles that do some damage that can be enhanced with crystal. While it’s good for chasing down baddies, it’s also not a bad way to get into the thick of battle (assuming that you can get a target link beforehand). In addition to causing damage, putting points in Suri Strike also allows Skye to keep a longer lock on an opponent before needing to attack it again.

Her ultimate is called Death From Above, and it’s by far her most versatile ability. Like Suri Strike it requires a target lock but once you have an opponent in your sights there are two different ways to aim Death From Above. Target the ability directly on the locked target and Skye will send a volley of missiles in a small cluster on that location (with about a two second delay before hitting their mark). However, if you target any other location around the locked target, the missile volley will be aimed in a line, effectively setting up a missile perimeter between the locked on target and the missiles themselves. In addition to causing damage, Death From Above, also stuns and slows enemies that are caught in the missile range. In my opinion, Death From Above has some serious tactical potential depending on how it’s used. Target it on the locked on enemy itself, and it’s a decent harassment tool that will slow and stun (damage is so-so for an ultimate). However, you can use the secondary line-targeting to prevent opponents from reaching the locked target (or punish them for doing so) or it can also be used to prevent the targeted ally from escaping. 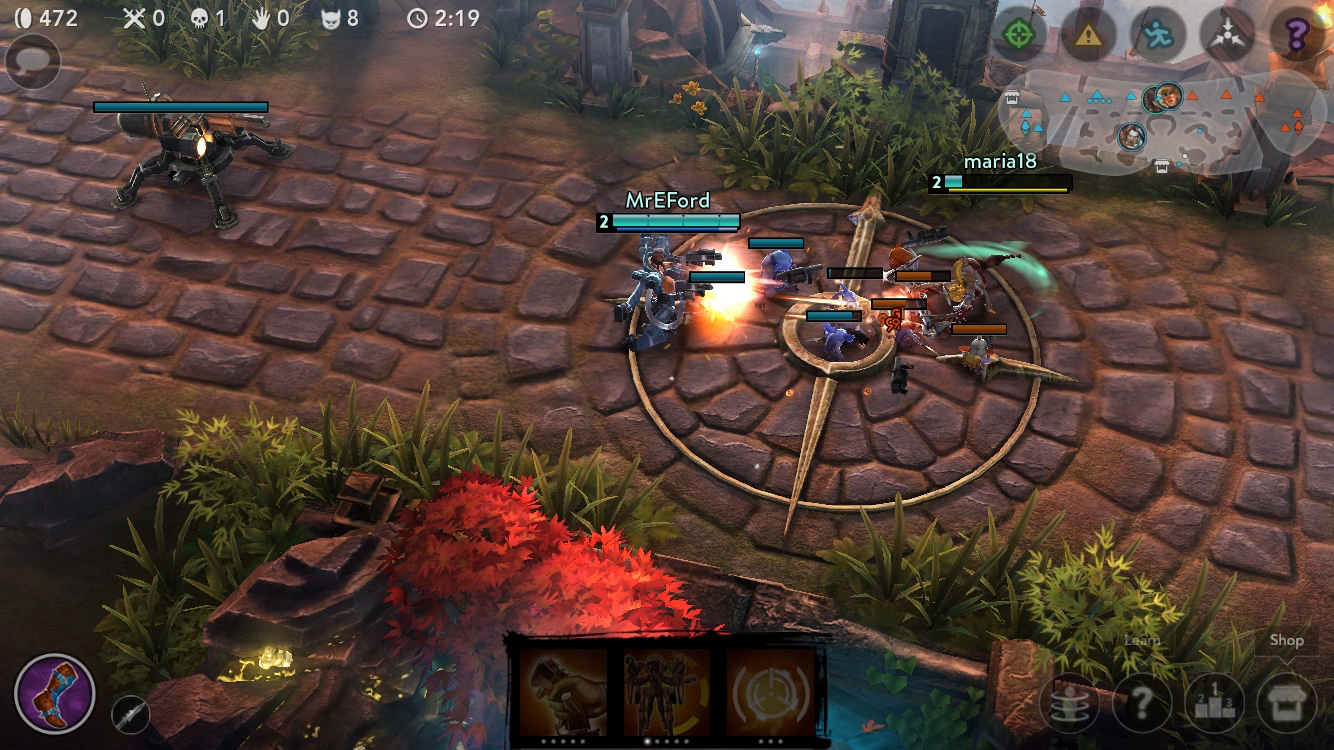 Equipment-wise, Skye should focus on Weapon, Crystal and a little bit of Sustain. Forward Barrage has a decent weapon multiplier so focusing on Weapon Power will not only make her basic attacks decent, but will make Forward Barrage pretty good. However, it doesn’t really help Suri Strike or Death From Above, so you have to focus on basic attacks to make it work. If you’re willing to sacrifice basic attack damage, Crystal Skye has the potential to be truly awesome. Not only does Forward Barrage also enjoy a nice Crystal multiplier, but building Crystal will also increase the length of the ability, making for a potentially lethal move. In addition, Suri Strike and Death From Above have Crystal multipliers. Finally, boots are a must to supplement Skye’s movement bonus and armor will probably be needed depending on what your opponent is building.

So, now that all her abilities and general equipment bonuses have been explained, how should you use Skye in a game? Well, I would recommend starting out with boots and potions if you’re in the lane, as the added speed will be needed to dodge around potential opponents (her sustain will be incredibly low at the start). After boots, you’ll have to decide whether to go Crystal or Weapon Power. While both are viable, at this point I’d recommend Crystal if you want to be a more aggressive Skye in team fights due to the significant crystal damage boosts across all abilities. If you do go Crystal, I’d recommend starting with Frostburn (to help with chasing down opponents) and then move on to Eve of Harvest (for Sustain), after that, Broken Myth, Shatterglass, and some armor (depending on opponent builds) should round out the build.

Otherwise, the biggest tip I can give for potential Skye lane players is to not overextend. As I’ve mentioned several times earlier, her sustain is not very high and she can easily be hurt significantly in the early game (forcing you to either retreat to heal or potentially feed your lane opponent). Be extra careful against a Ringo or Vox. If you’re going against a Skaarf, use the movement bonus with Target Lock to avoid his flame (same with Vox and his bounce). If you lane conservatively, get your last hits, and build correctly, Skye will be an amazing potential range carry in the latter half of a game.

Skye is available for ICE until this weekend. Afterwards, she can be unlocked with the usual glory. Meanwhile, if you’re interested in more Vainglory coverage, check out our awesome Support Guide or our weekly Mobcrush streams.