PikPok’s latest game Breakneck (Free) had my attention early. It looked like a cross between Race the Sun ($4.99) and Star Wars Episode I: Racer, which is basically one of my favorite Nintendo 64 games crossed with one of my favorite recent iOS games. How could I possibly say no to that? It’s not possible, and I didn’t say no. So here I am, weeks later, finally playing the thing. Was it worth the wait? Well… kinda.

First thing’s first: The game’s gorgeous. It looks like somebody on Tatooine built a Wipeout ship out of old podracer parts, and it’s magnificent. Everything is sleek and gritty in equal measure, with the bright red of your racer contrasting nicely with the dusty browns of the desert floor or the dark, shiny walls of an alien fortress. 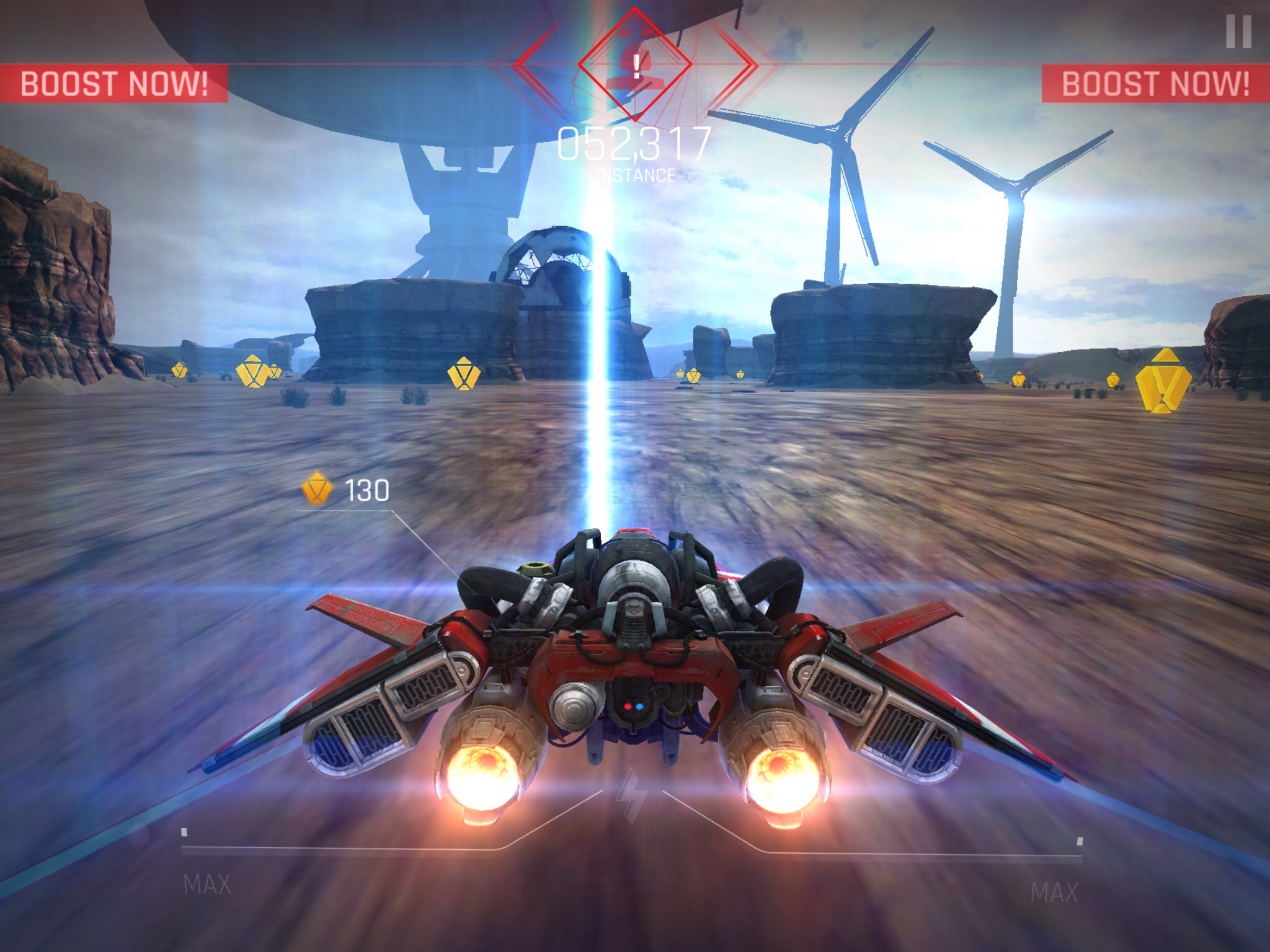 Unfortunately, this beauty comes at a price. When I first opened the game on launch day the framerate was choppier than Edward Scissorhands trying to clear a path through a dense jungle. I could easily attribute about half of my deaths early on to the game skipping around, and it was maddening. Luckily, there was an update out pretty quickly that helped the issue, but it’s still not perfect. A twitchy game like this needs to run as smooth as possible, and Breakneck still has some ways to go.

Alright, so it’s pretty. But what’s the gameplay like? Well, as I alluded to earlier, it’s a bit like Race the Sun. Okay, it’s almost exactly like Race the Sun. You’re in a ship speeding across a flat landscape in a strange, alien world and you need to clear as many zones as you can before crashing into something. In Race the Sun you were also trying to escape the darkness, and here you’re basically trying to outrun a laser beam. It functions the same way, in that it adds a time pressure to the game and means you’ll have to boost as much as possible. 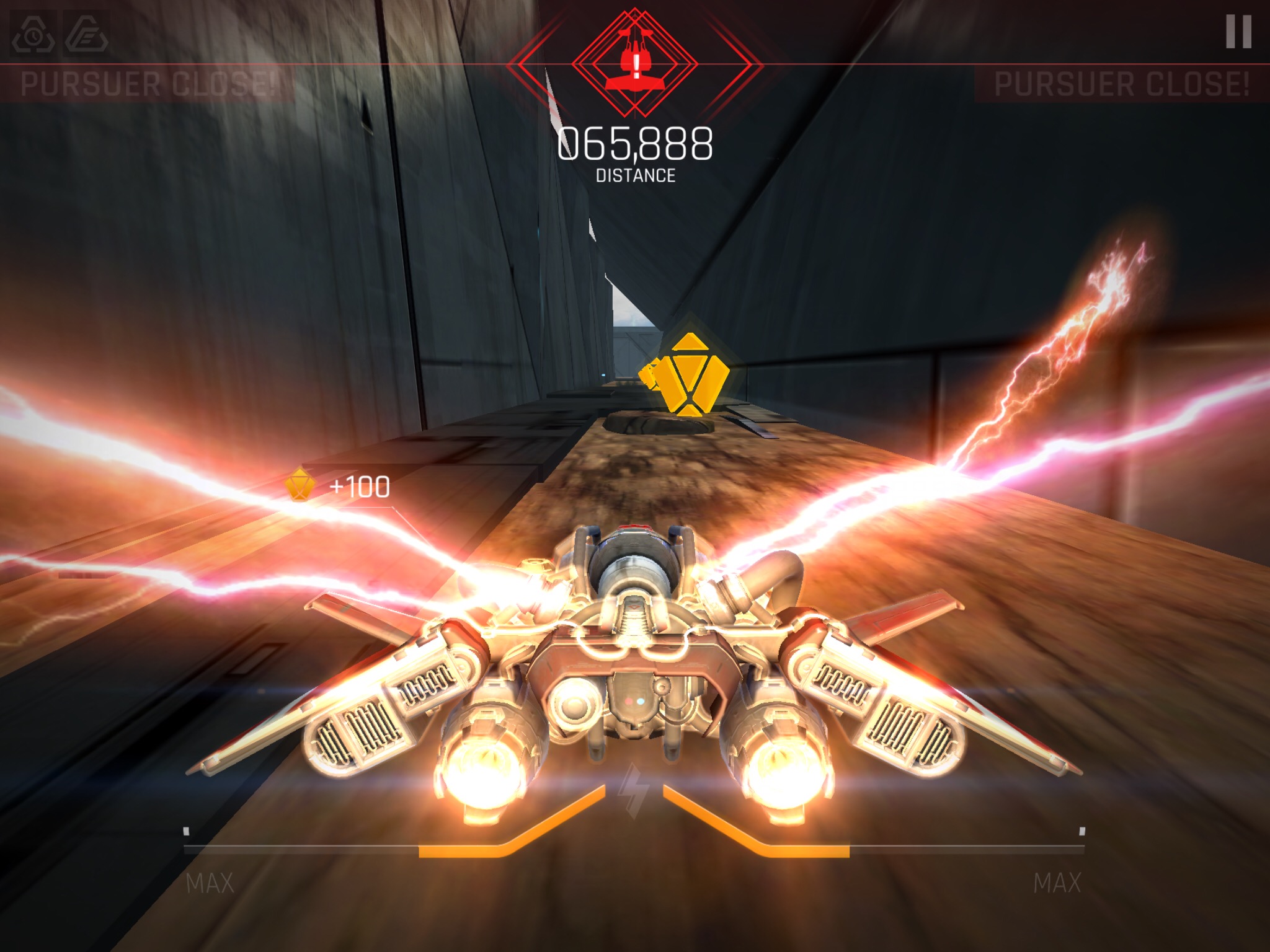 The way Breakneck handles boosts, though, is quite a bit different from Race the Sun. Whenever you fly close to a wall you’ll get a charge of energy, and once your energy is full you can tap both sides of the screen to shoot forward at a much greater speed. Aside from the visuals and the free-to-play model (which we’ll get to in a bit), this boosting system is probably the main difference between the two games. It works really well, too, and adds a bit of risk/reward as you seek out narrow corridors and near-misses to charge up your craft.

Controlling the game is dead simple, with a tap or press on either side of the screen to move the ship in that direction. It feels pretty responsive (when the framerate isn’t pumping the brakes), but it still took me some time to get used to. See, rather than smoothly turning left or right, the ship sort of strafes back and forth. It actually reminded me a lot of PikPok’s classic zombie runner Into the Dead (Free) (which I suppose is arguably the same genre as Breakneck, if you squint a bit). The strafing, combined with the close-up view of the craft, means that it can be a kind of hard to tell what’s on either side of you. It’s especially frustrating when you’re trying to navigate passageways that zig-zag back and forth. 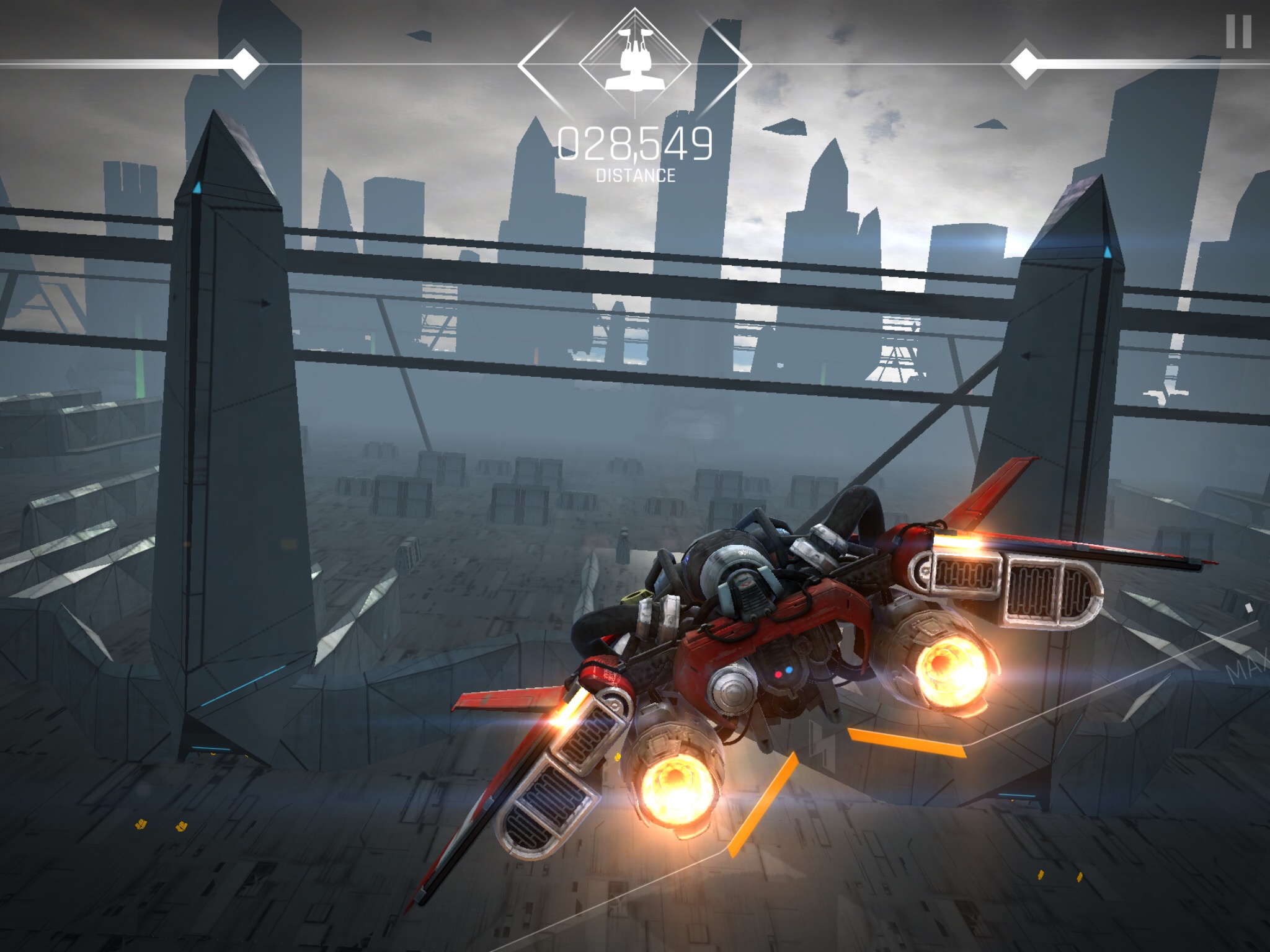 Speaking of frustrating, how about we dive into the game’s monetization now? Great! First off, the good news: there isn’t a single timer anywhere in the game, which means you can race to your little heart’s content. Now for the bad news: the ads. Oh, god, the ads. You can watch a video to continue your run, which is fine, but there are also ads that sometimes play between races that you have to watch for at least a few seconds. It wouldn’t be that bad, but the game already requires an excessive amount of tapping and waiting to get back into the next session and these non-optional videos just make it worse.

Furthermore, the game uses Kiip Rewards to earn currency, which puts up yet another little window preventing you from playing. Making it even worse is that most of the time these Kiip Rewards would just endlessly hang there with a little “loading” prompt, until I’d finally get tired of waiting for the stupid Advil commercial to load and just rage quit the app altogether.

So yeah. Breakneck has a lot of problems right now. It needs to run smoother, it needs to shorten the amount of time spent tapping through menus to get to the racing, and it definitely needs to annoy its players with all the different ad services a bit less. On top of all that, I wouldn’t mind having a more pulled back view of the ship and maybe some Game Center leaderboards for good measure. All of that being said, it’s hard to argue against a free game that looks this amazing and can be pretty darn exhilarating at times. If you thought Race the Sun looked too minimalist for your tastes or you didn’t like the tilt controls in Kayos (Free), maybe give Breakneck a try.