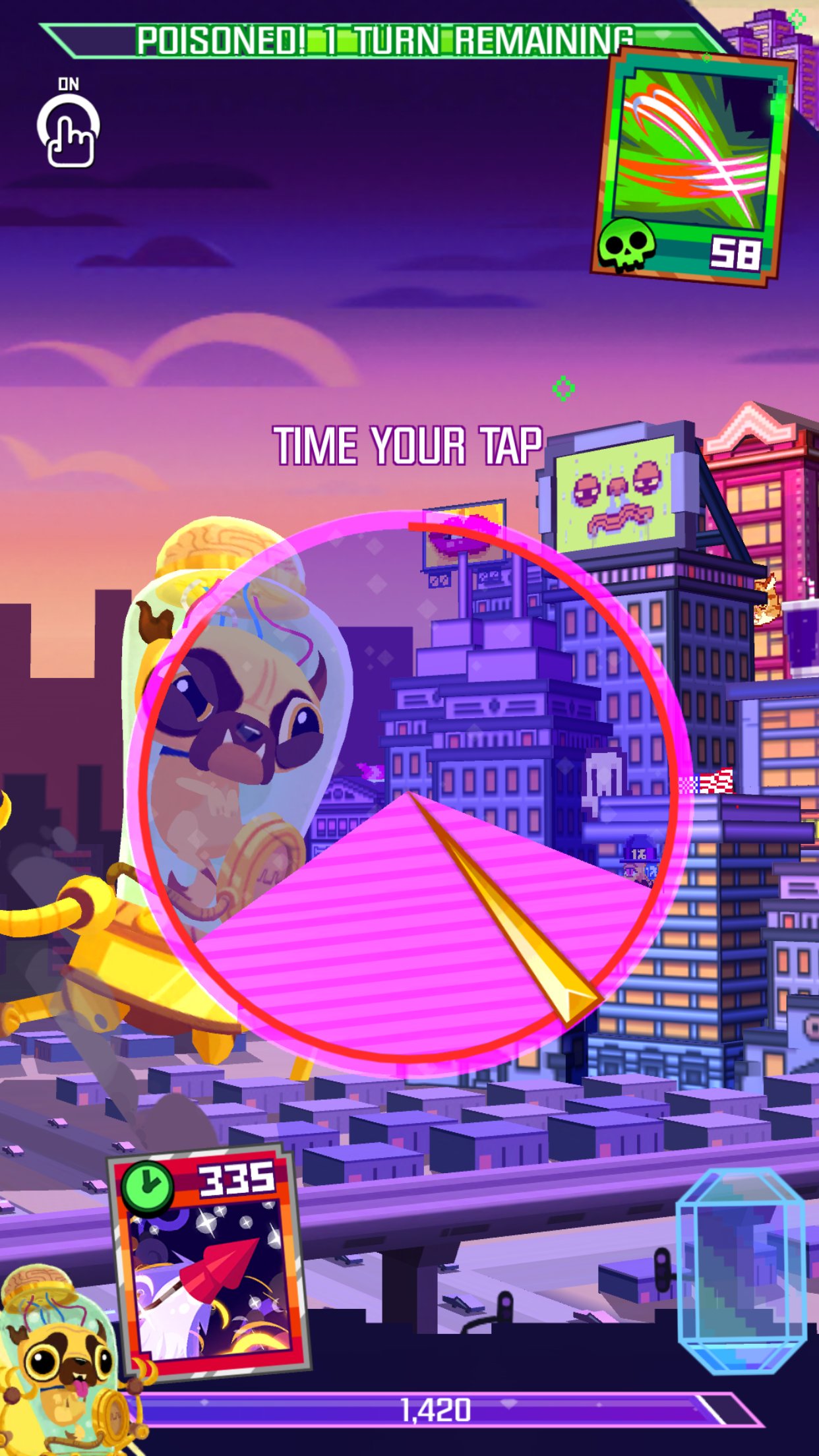 This is a card game set in the world of Monsters Ate My Condo ($0.99), featuring the monsters that you once fed condos to. Now you choose one of four of them to take into battle, dueling it out with other players in card-based battles. The cards have a variety of effects, including going first, poisoning the opponent, and healing, the latter of which is particularly deadly thanks to it healing and doing damage. Last monster standing wins.

The combat is centered around a rock-paper-scissors style of elemental besting. Blue beats red beats green beats yellow beats blue. Getting the elemental advantage will double the damage you do, and halve the damage the opponent does, making it quite worth getting. This also means you’ll want to make sure your decks are balanced, perhaps. An imbalanced elemental deck will open you up to weakness, but if you have particular cards you like, it can also mean that you can exploit it. The combat is asynchronous, and you’re always playing against an AI opponent. This means you don’t have to be online to play, but you will see some moves that feel suboptimal, such as intentionally eschewing an elemental advantage in order to play a disadvantage. Considering both players are playing with 12 cards, it feels like maybe this isn’t smart?

Interestingly, the asynchronous nature of the game is handled by giving players two separate decks to use, both a city deck that other players attack, and monster deck that you use in battle. So, you can have a balanced city deck, but roll in combat with an imbalanced elemental deck. This might be smart, as you can choose from 4 different opponents when battling, and you can choose an advantageous matchup. The draw of the cards and how you play them will determine things, but you can get a leg up on opponents. 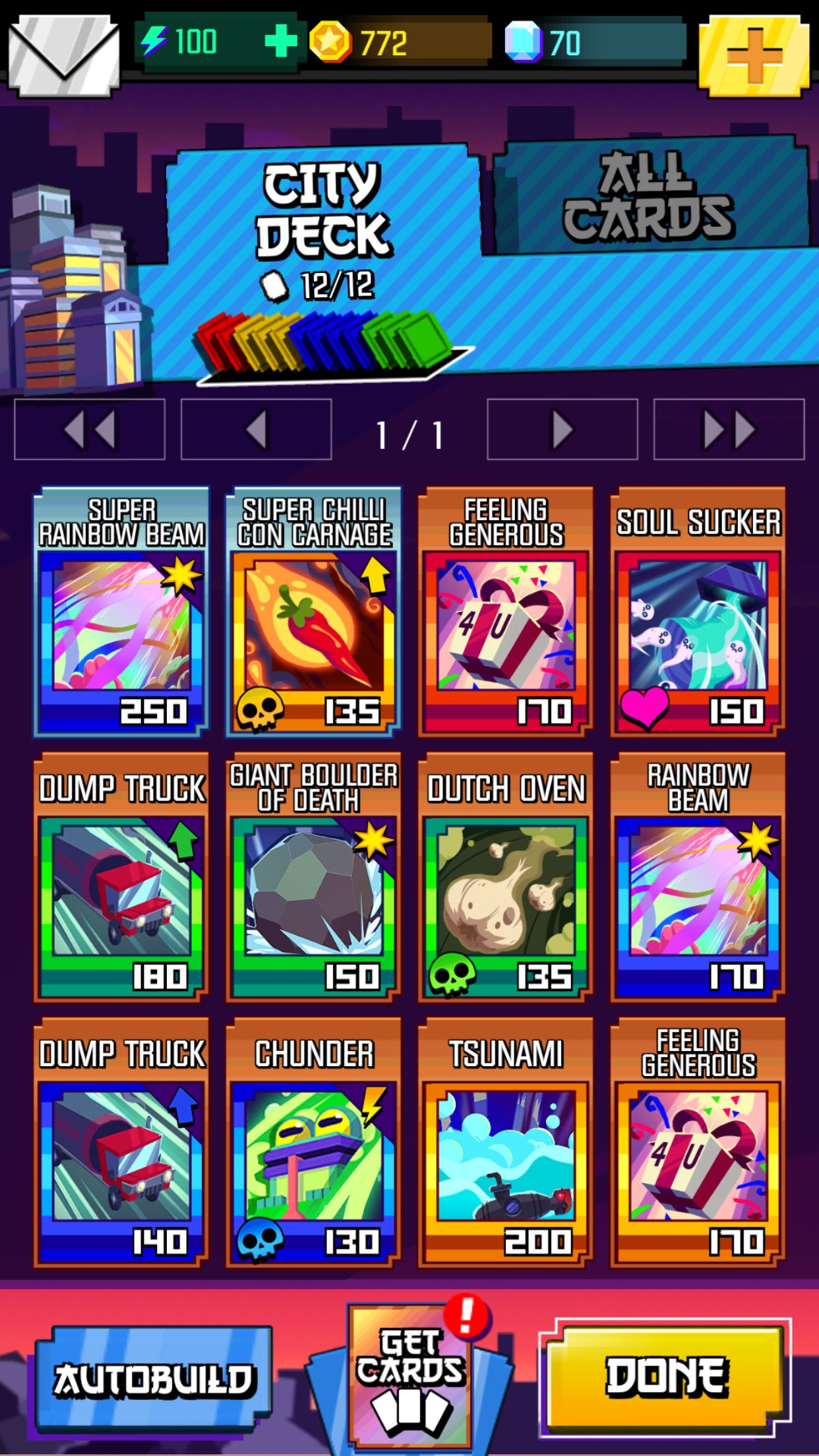 The game is structured through weekly tournaments, with rewards for players at different tiers at the end of each tournament. I think weekly is way too long for these tournaments, because it can be difficult to advance if you get started late in the week. This is also where the game starts to reveal itself: this is definitely a game where the players who pay for better card packs will have a decided advantage in the rankings.

While I’m fine perhaps with giving people who are dedicated to the game a chance to be the best, even if it means that they spent a lot of money, I would like to see some middle tier of in-app purchases. I’d be interested in spending maybe a few dollars to get packs of silver and gold cards, but the entry cost to buying any packs of cards is just too high. It costs $19.99 to buy a 10-card pack with a chance of diamond cards. You can watch video ads to get more premium currency, but only 5 crystals, which might let you reshuffle opponent choices for free. And you can’t buy gold, the currency used to buy the lesser card packs. You need spare cards to power up your monster, too! 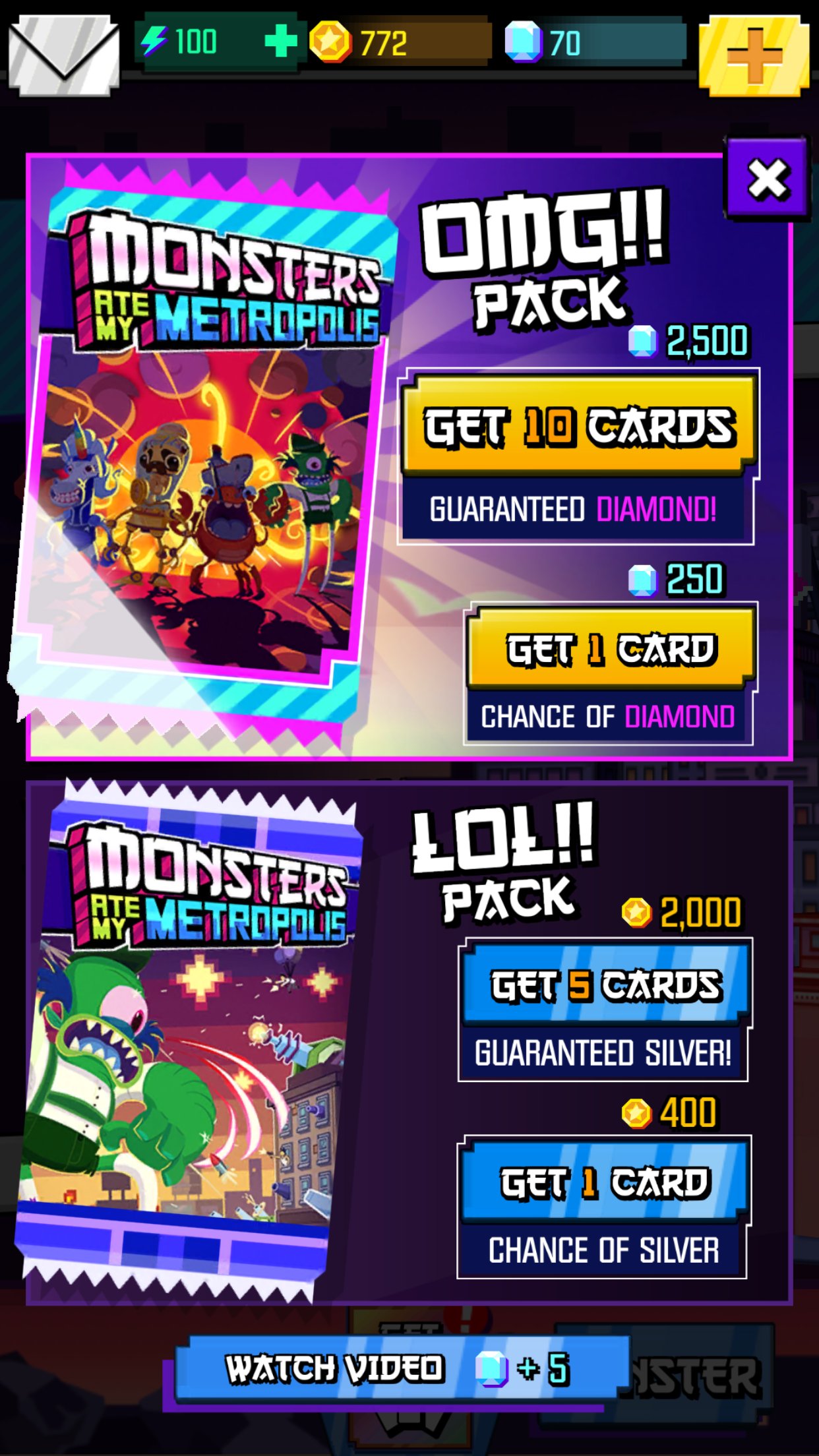 I wonder if a soft launch would have helped this game out – I know they ran a short beta for the game, but I’d be interested to see what a longer period of testing would do for people playing the game, just to see how the in-app purchases would be changed over time. Maybe it’s smart that the game is aiming either toward free players or whales. But some room for folks in the middle would be nice. As it is, there’s nothing keeping you from enjoying Monsters Ate My Metropolis for free. The energy recharges at a reasonable rate, and I got so much in the way of free energy that I found it hard to run out of it. Plus, you can do the “spam your friends" thing to get more, but with the benefit that they get gold out of it.

Plus, this game is very accessible. You get 3 cards per hand, and the elemental system is very simple to understand and use. Plus, there are reminders all over the place. You can turn off the special combat moments, where you have to time a tap to increase damage or do less of it, if you want. If card games intimidate you, you will enjoy this. Again, the AI is frustrating in that it will sometimes set itself up to lose with obvious moves.

Free-to-play haters will despise this game with every fiber of their being, but maybe it is ideal that it opens itself up to just whales or common-level players. Perhaps tournaments with particular maximum levels of cards could be instituted. As well, short-term tournaments along with weekly ones would be great. Perhaps this is tossing away the focused simplicity of the experience, but maybe it’s focused on one tournament, and two classes of players to a fault. It’s an interesting game, but one whose structure is decidedly up for debate. But it is worth a download, if only because it has the greatest victory song ever. It is glorious and you have to hear it for yourself.