Did anybody around here play DrawQuest? It was kind of like Draw Something (Free) but without the pesky game parts getting in the way. Each day you’d be tasked with a new quest (something like “Who crossed the road?” or “Publish a novel”), and you had to make a drawing based on it. You’d earn coins if other users liked your work, and it was incredibly satisfying to craft the perfect picture and have it rewarded with heaps of adoration and fake money. Furthermore, perusing other people’s drawings could be just as much fun (if not more so) than making your own, and the creativity on display could be truly astonishing at times. It was eventually shut down and removed from the App Store when it failed to turn a profit, which unfortunately is not an uncommon tale. The good news, though, is that iOS basically sees an unlimited supply of new games week after week and odds are something else will come along that can scratch the same itch. 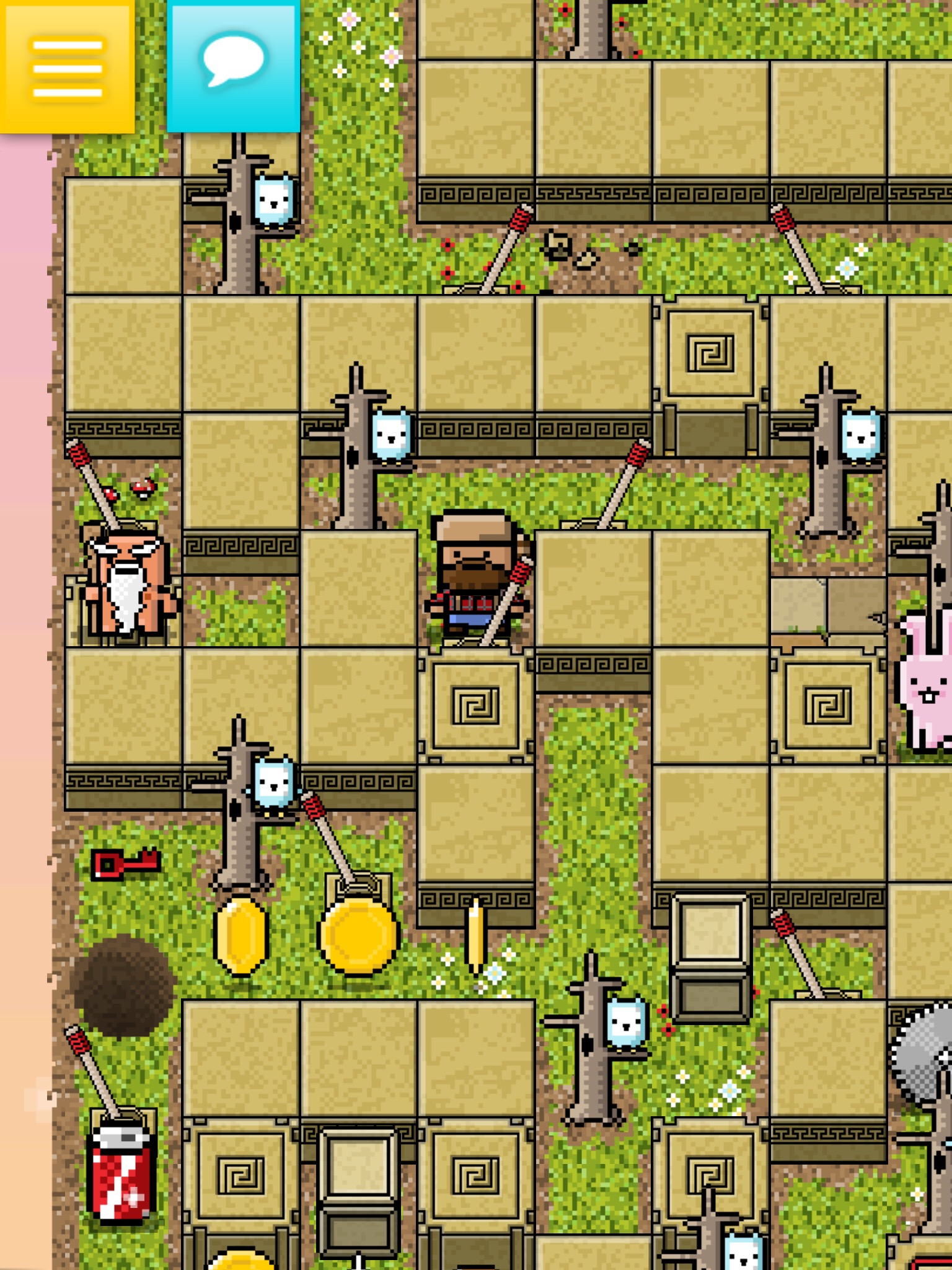 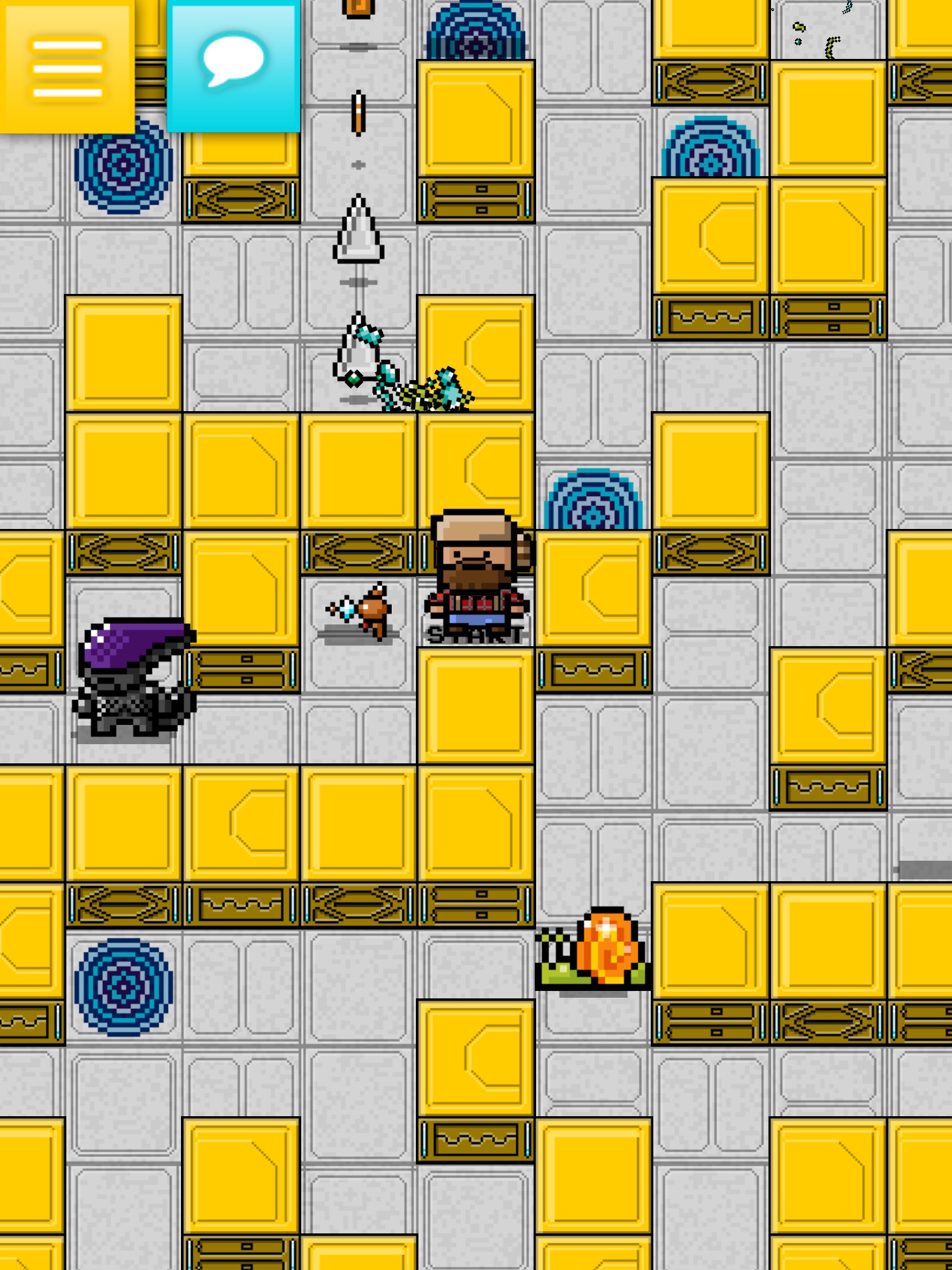 Well, last week saw the release of a game that scratches that itch pretty nicely, and it’s a dungeon crawler, of all things. Hyper Liger’s Mazecraft (Free) sees you constructing devious labyrinths full of traps, treasures, and enemies that are all created by the game’s user base. You can make your own mazes or just spend all your time playing other people’s (and tip them coins for a job well done). It’s a neat gimmick that gives the genre a fresh twist, though it’s not without some fairly annoying problems.

First, though, let’s dive straight into the gameplay. When I first heard the name “Mazecraft” I thought the game would consist more of traditional mazes with long, winding passageways and lots of backtracking as you try to get to the finish. There’s a bit of that here, to be sure, but for the most part the ‘mazes’ you encounter are pretty straightforward, and often consist entirely of wide open spaces with a very obvious path to the exit. The real challenge of the game usually comes in the form of puzzles to be solved, whether it’s collecting different colored keys, picking up weapons in the right order to kill enemies, finding false walls, or solving riddles. The quality varies wildly (as is to be expected with a game entirely based on user created content), but there are definitely a lot of gems to be found. Plus, if you find a maze you particularly enjoy, you can “follow” its creator and be notified whenever they make something new. 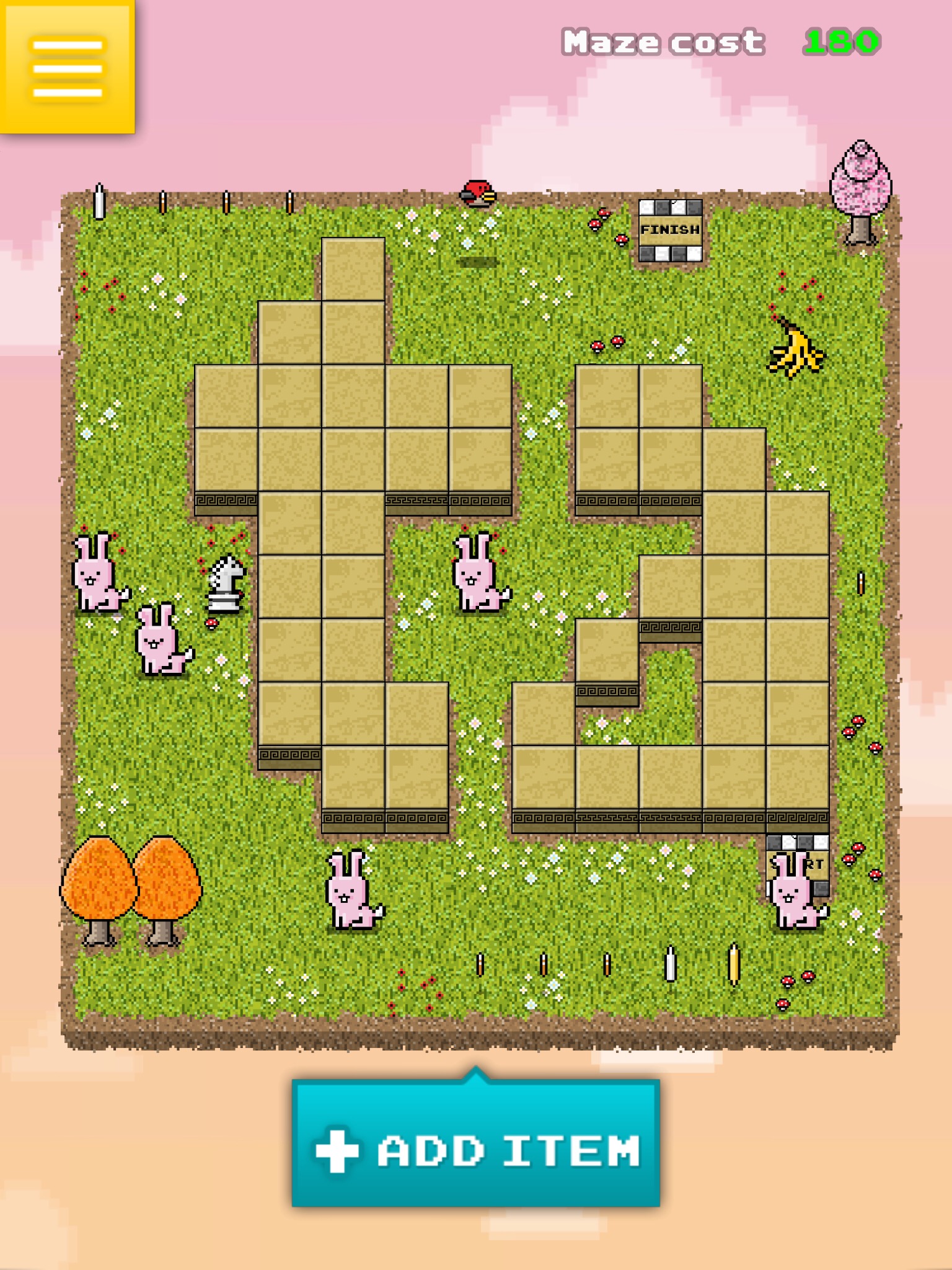 The controls work sort of like the recently released Pac-Man 256 (Free), with simple swipes dictating which direction your character moves through each maze. It works pretty well most of the time, though I did have a bit of trouble whenever a section of a level involved precise timing. People in our forums have been having some trouble with the controls as well, but again, they weren’t much of a problem for me most of the time.

Outside of the gameplay itself, Mazecraft has a few fun hooks to keep you playing. There’s a mission system with three objectives that you need to complete in order to level up, with tasks like “Kill 3 minotaurs in one maze” or “Publish a maze with 2 treasure chests”. Interestingly, you can ‘game’ some of these objectives by searching for levels that people designed to easily complete them. (For example, I effortlessly found a maze where you simply had to pull a lever and it set off a chain reaction resulting in the mass slaughter of dozens of minotaurs. Objective complete.) Another neat hook is that each maze you create gets a random trinket to be collected, and you can try to find and collect all 100 of them in other people’s mazes if you are a completionist.

This is all well and good, but obviously the main draw of them game is the ability to get your own hands dirty with the game’s level editor. Honestly, this is probably the part of the game that works best. Everything is super simple and intuitive, and you can pretty easily create your own crazy labyrinths full of tricks and traps in minutes. I can’t imagine the creation process working better on anything but a touchscreen, with simple taps to quickly clear paths and add enemies or treasures or whatever else you want. Each thing you add to your level costs money, and when you’re done it adds it all up and that’s the cost of publishing your maze (once you’ve proven it’s possible to win, of course). 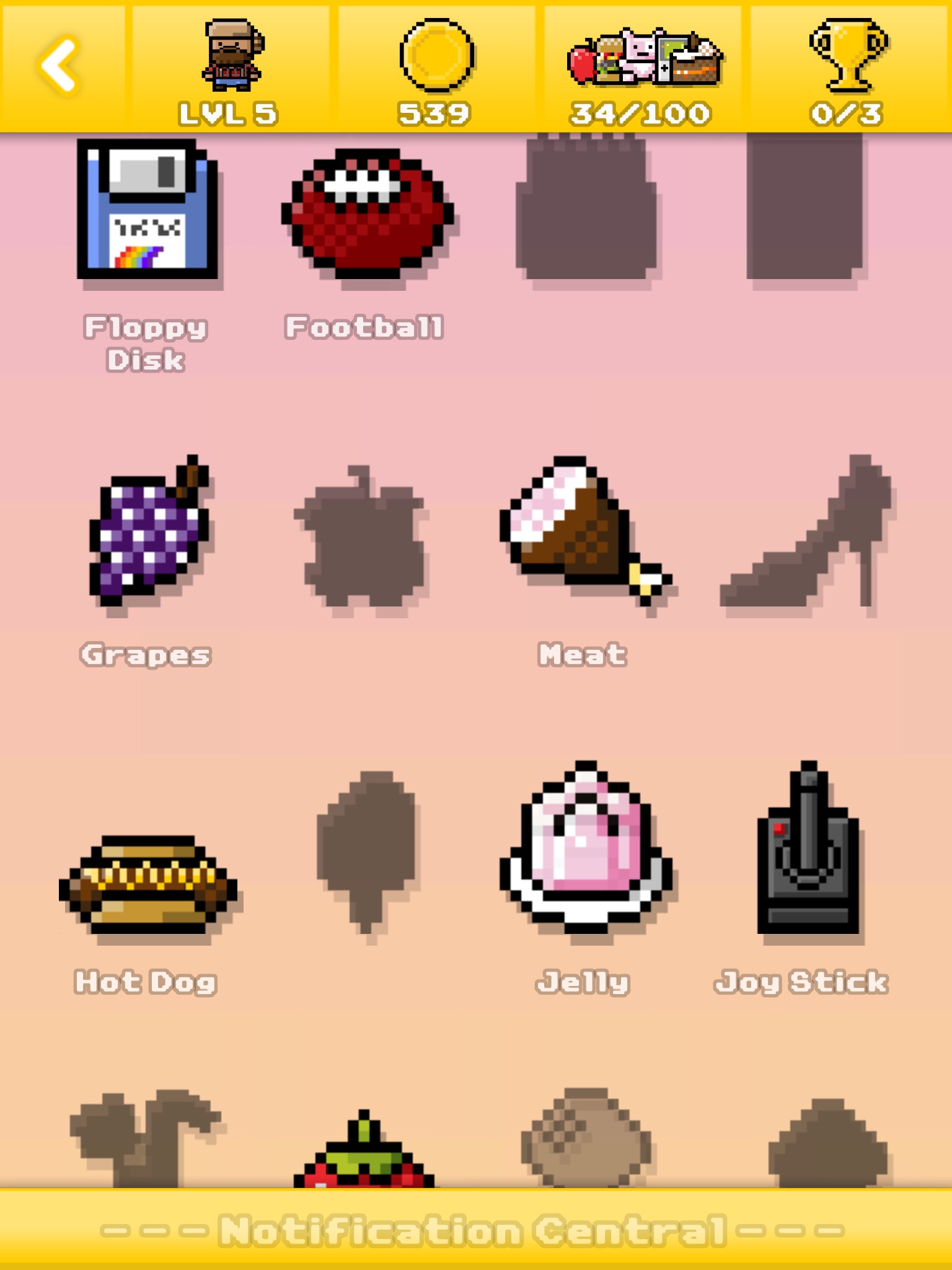 There are a lot of ways this “pay to publish your maze” thing could have gone wrong, but the game’s monetization is pretty fair for the most part. The prices on maze items are pretty reasonable, and it’s not hard to earn coins by watching video ads or searching for other mazes that were specifically designed to offer lots of coins. The part of all this that does suck, however, is that there is a limit to how many coins you can hold at any one time — unless you buy an IAP for a “bigger purse”. It wouldn’t be that big of a problem, but the limit is 999 coins and if you want to create a “space themed” maze, you’ll need to pony up 1500. Basically, this means if you don’t want to spend real money, you’re stuck with the default “Greek" theme for all your mazes.

My main problem with the game, however, is something I’m not sure there’s a good solution for. It’s discoverability. See, you can spend an hour or two crafting the most beautiful maze in all existence, dumping all your hard earned currency (made possible by several purse upgrades) into it, and… no one plays it. And that just sucks. For me, anyway, by far the best part of the game is watching replays of other users trying to make it through your maze in one piece, laughing when they fall into your traps and choosing the wrong answer to your hilarious riddles. If no one even plays it, it just feels like a total waste of time and good ideas (which is probably what it feels like for the majority of small iOS developers, actually). The only way to get your maze noticed is to keep re-publishing it–costing money each time–with more eye catching names. For example, one maze I was particularly proud of garnered no views as “Holy Grail”, so I re-published it as “Grab the Grail!” Still nothing, so I randomly tried “Boob Adventure!” and was suddenly flooded with plays before the game just crashed altogether. (Of course, it was automatically re-named “elbow Adventure!”, but still.)

Mazecraft is a game that has a ton of great stuff going for it. It takes the streamlined community creation aspect of something like DrawQuest (RIP) and combines it with a pretty decent dungeon crawling/puzzle game. The controls could be tighter and the free-to-play model may turn a couple people off, but overall it’s a pretty well put together package. I do wish there was a better way to get people to play your mazes without resorting to click bait-y titles (maybe include a thumbnail or something?), but luckily you can keep re-naming them until you find a winner–so long as you have enough virtual cash. Despite these issues, though, it’s still a game I’d easily recommend to anyone who likes level editors and sharing user created content. Plus, it’s free! Hey!