I’m not sure why, but I have a serious weak spot for clickers. I don’t know how many hours of my life have been wasted on mindlessly tapping on the screen, but it’s probably somewhere between 20 and deep shame. When I first opened Bitcoin Billionaire (Free), I thought, “Another of these, huh? Dumb.” And then I woke up a month later scared and confused with about 200 maxed out time machines. So yeah, I have a little bit of a problem. 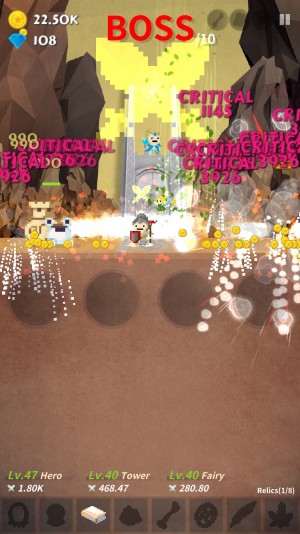 My main issue with most clickers (besides being a seemingly huge waste of time) is the “clicking” itself. Randomly jabbing your finger against a glass screen as quickly as possible for long stretches of time just isn’t fun. Of course, this is why most of them have something like investments, so you can eventually let the game  do the tapping for you. But still: It’d be nice if the actual “gameplay”–namely, the tapping itself–was actually fun to do. Which is why I decided to review a little game called Tap Quest: Gate Keeper (Free) by Idle Idea Factory.

At first glance it seems awfully similar to last year’s Tap Titans (Free), but there’s a major difference that fixes the problem I mentioned above.  See, in Tap Quest you aren’t just assaulting the screen with your fingers like a drunken pianist. You actually have to pay attention to how you tap, because you’re really controlling the movement of a little character with a sword. A tap on the left or right sides of the screen makes him move and attack in those directions, which you’ll need to do on account of all the bad guys everywhere. They’re trying to break into the tower in the middle of the screen, see, and if they succeed it releases a giant purple dragon and ends the game. (Apparently “breaking in” means serving little search warrants or something, because every time an enemy tries to get into the tower a tiny paper scroll appears above them.) 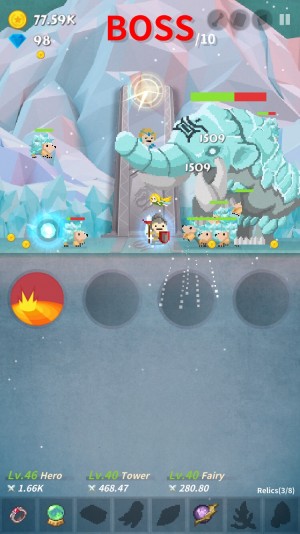 The left/right combat system is not terribly deep, but it does require a surprising amount of strategy at times. For example, when you defeat an enemy it will often drop a chest full of coins. If you stay in that spot to collect them, a bunch of other enemies will probably rush the tower behind you. There is a constant struggle between risk and reward as you try to balance the fighting with the coin collecting, and it’s an incredibly refreshing twist on the genre. In fact, at times it feels a lot closer to something like Slayin ($0.99) than a simple clicker. There are also lots of different types of enemies that require different strategies to defeat, like the ghosts that disappear every few seconds and the bosses that can stun you into paralysis. What’s more, all of these little micro-decisions need to be made in the blink of an eye, since it doesn’t take more than a couple seconds for an enemy to break into the tower and end the game. It’s super hectic, and absurdly fun.

So why do I keep calling it a “clicker” at all, then? Well, it’s partly just semantics I suppose, and the need to classify things into familiar genres so the review isn’t 12 pages long (which only Shaun can pull off). More than anything else, it just feels like a clicker. It has the familiar gameplay loop of tapping away to earn currency, which you then use to upgrade a bunch of things over and over in slightly higher amounts until you run out or (more often) get bored and move onto something else. In Tap Quest the main upgrades are your hero’s attack strength, the tower’s attack strength (it has an Eye of Sauron lookin’ weapon that auto-fires) and your little fairy companion’s attack strength (she follows you around and auto-attacks). There are also various power-ups dropped during battles which you can upgrade in a similar fashion, ranging from explosions and meteor blasts to lightening chains and whirlwinds. Finally, if you still aren’t powerful enough to progress further in the game, you can buy chests that contain random weapons and armor to make you even stronger. 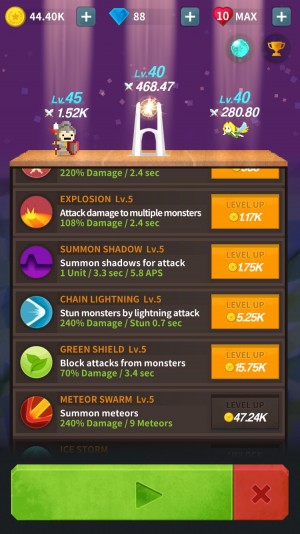 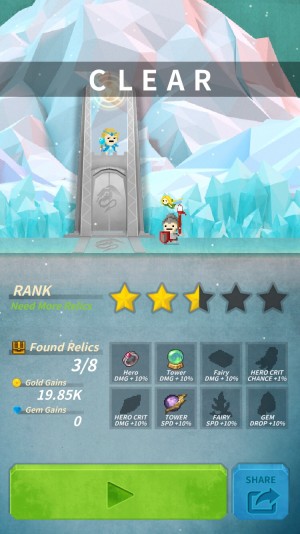 This is all well and good, but I have exactly two complaints with Tap Quest: First is the fact that you can’t always see your character in the heat of battle. The game has a cool art style reminiscent of Tiny Tower (Free), but it’s incredibly easy to lose your little bitizen-like dude amidst all the pixel-y chaos happening on screen. I can’t count the number of times I’ve assumed I was in one place and it turned out I was on the other side of the screen and lost. It’s pretty frustrating, but fortunately each game usually only lasts about a minute so it’s not a big deal to just dive back in a second later. My second complaint is that, at the moment, the game is iPhone-only. Boo, Idle Idea Factory. Boo.

So is this game even a clicker? An RPG? A side-scrolling beat-em-up? A bit of all three, most likely. Whatever genre it is, it’s definitely a really fun little mobile game. I have a few small problems with it here and there, and the energy system (10 hearts that slowly regenerate) might turn some people off, but none of these things bothered me very much at all. If you enjoy the digital dopamine drip most clickers provide with lots of incremental upgrades but hate the actual “clicking”, then you really need to check out Tap Quest: Gate Keeper.