Scrolling through the App Store screenshots, I can see how one might be led to believe the latest Angry Birds game is just another free-to-play match 3 battler. It appears to have all the trimmings and trappings of the popular (if a bit tired) genre: a grid of colorful tiles, characters to collect, loot to be gained, and–of course–multiple timers and currencies, all dressed up in that familiar Angry Birds style. I see how it looks. But you’re wrong. Angry Birds Fight! (Free) is actually a bold exploration of the concept of free will in a deterministic universe.

You see, the game makes it seem like your furious matching skills are deciding your fate every round, but in actuality this is an illusion. Your triumphant victory or bitter loss was all but inevitable, based almost entirely on factors that were set up ahead of time and out of your control. It’s just like when you chose that bowl of cereal over a piece of toast this morning: Was it really your decision? Or just the accumulation of trillions of events since the Big Bang that happened to lead to one synapse firing over the other? We’re all just machines, man, and those bird flinging bastards over at Rovio are here to wake us the hell up. 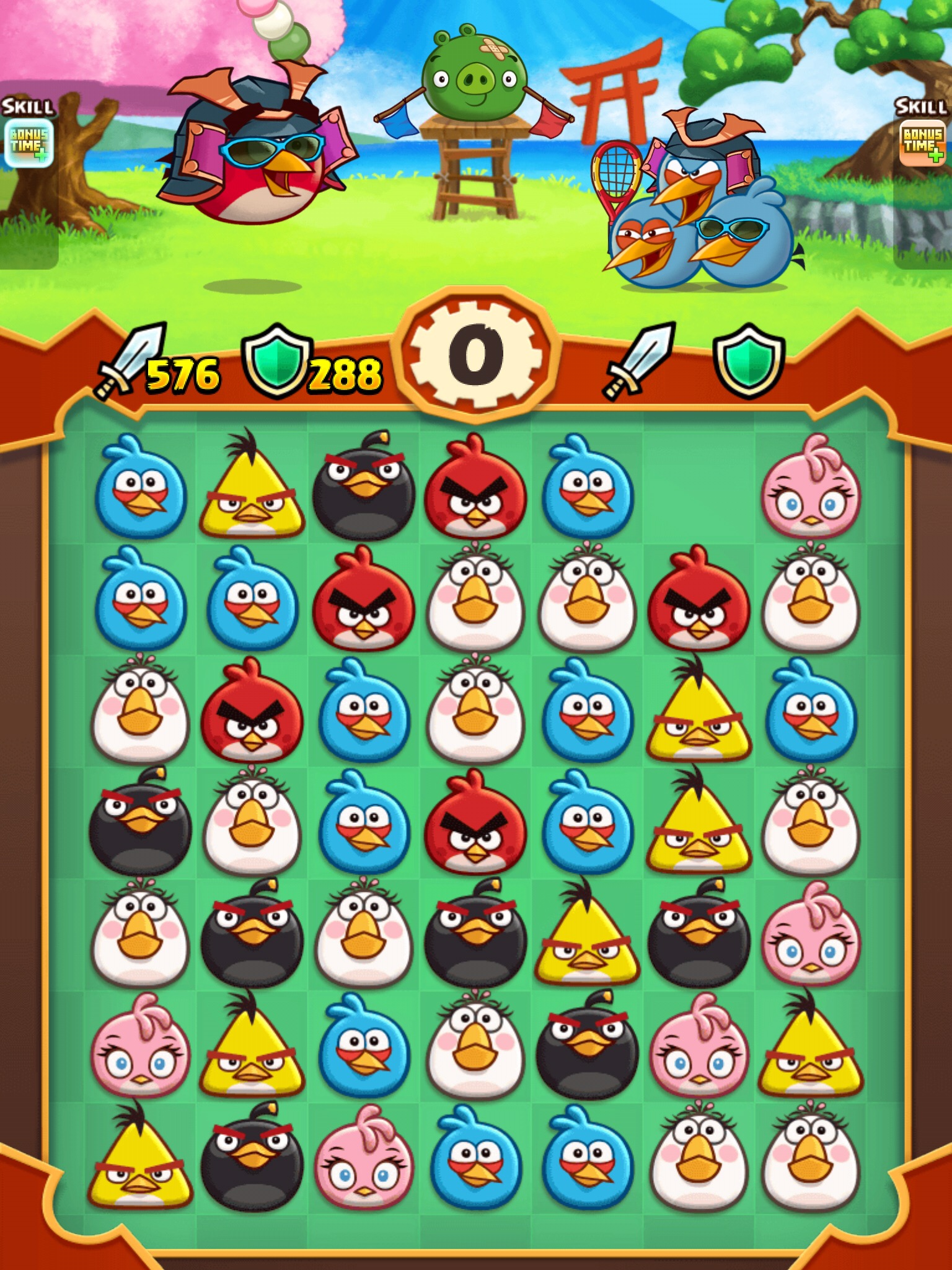 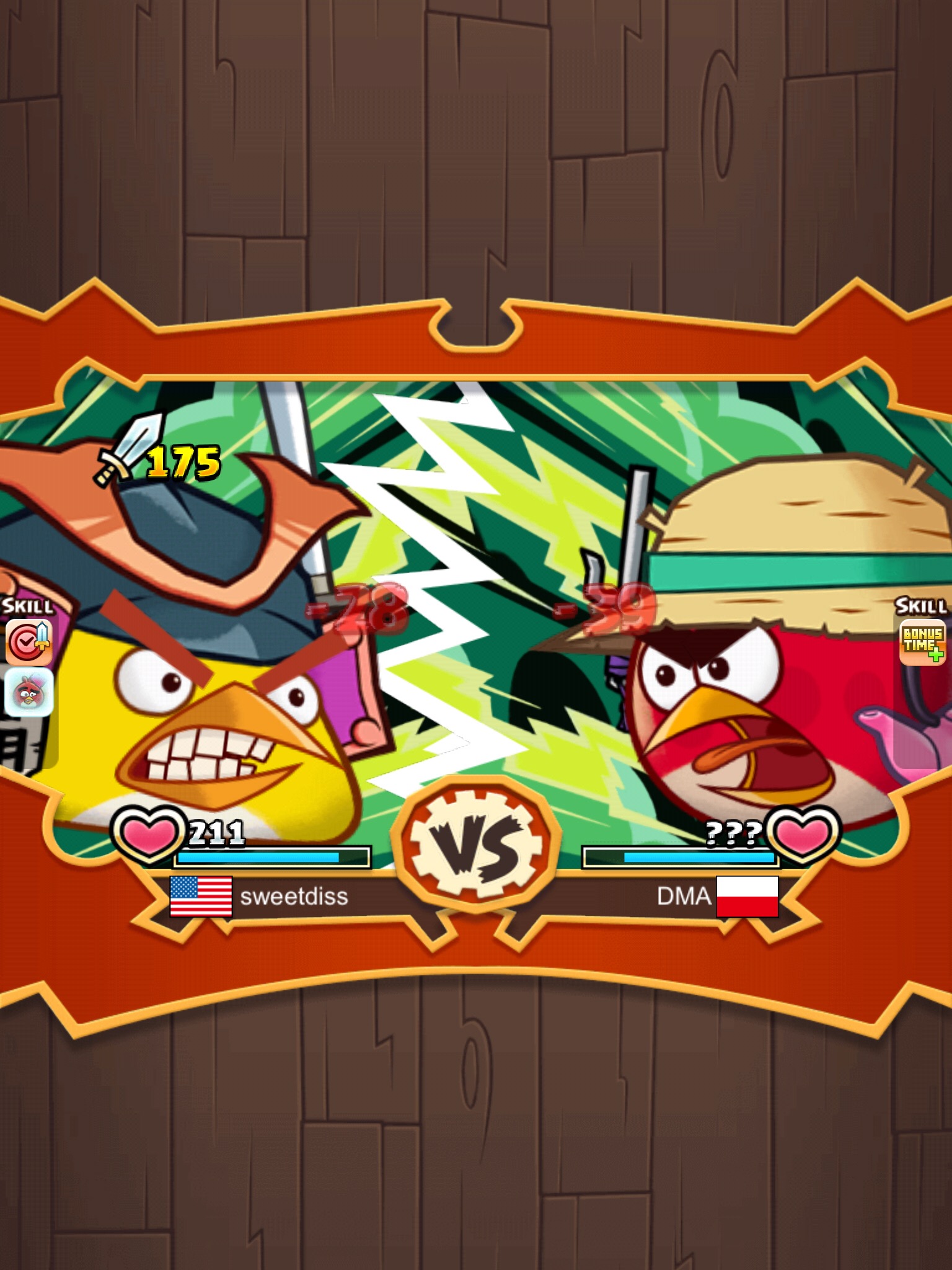 In the game (sorry, inevitability simulator) you are matched against a random opponent online, and you’re both presented with the same board of colorful birds to match. I’m not sure if it’s actual multiplayer, or “multiplayer” like in the launch version of Real Racing 3 (Free), but it doesn’t really matter either way (though the App Store description seems to indicate the former). What’s important is that all your favorite avian heroes from the series have been cloned a dozen times and spread across the screen in a grid, and your job is to swap them into matches of three or more. There’s the main red guy, the yellow triangle guy, the girl one that needs to be pink (how else would you be able to tell?!), etc. A 45 second timer keeps things suitably hectic, and it all works pretty well as far as match 3s go.

The thing is, your matching skills don’t really matter that much. What matters is the stats and equipment you bring into battle (and those brought in by your opponent). There were moments when I did terribly and still demolished my adversary, and others where I played like an absolute champ and was ripped to shreds. (True story: I started a battle once and had to put my phone down before I could play, and when I picked it back up again I had somehow won the match. And I literally did nothing.) The game usually matches you with someone of a similar level, but the equipment and skills you bring to the match can completely throw that balance off. I started off rather enjoying the matching and fighting, but by the time I realized how inconsequential it all was it began to seem a lot less fun.

This is still Rovio we’re talking about, though, and while you could argue whether or not the experience is worthwhile or fun, you can’t really argue with how well the thing is put together. Everything looks and sounds really top-notch, from the cartoony menus to the amusingly cute fight animations. The match 3 mechanics themselves feel pretty great as well, despite the fact that the game doesn’t really do anything new or interesting with them. It’s actually pretty striking (and a bit sad) when you compare Fight! to the recent You Must Build A Boat ($2.99). Both are trying to do roughly the same thing, but one was made by a huge money-making engine and comes off a bit flat, while the other was made by a tiny studio and is deeply rewarding.

Of course, all of this is only a problem if you are viewing Angry Birds Fight! as a game that has to be, ya know, enjoyable and whatnot. But, as we’ve already established, Angry Birds Fight! is clearly meant as a rumination on the nature of our universe and the way we humans perceive it. The matching and battling is the part of the metaphor that represents decision making, and the algorithms that determine which over- or under-powered foe you play against represent what really causes that decision. (I mean, the game will even blink a potential match at you if you take more than one second to find one yourself. Pretty on the nose, Rovio.) However, this is Touch Arcade and not Philosophical Review, so I guess I have to ultimately evaluate it as an actual “game”. Here goes: It’s not great. It’s packed with all the free-to-play nonsense you all hate, the gameplay is pretty bland, and nothing you do seems to matter in any way. Where’s Nietzsche when you need him?