Considering one of the biggest features with the recent Final Fantasy: Record Keeper (Free) update is the announcement of Memory Crystals and the ability to beak the level cap, we knew it wouldn’t be long before the first ones started to hit the game. Lo and behold, this week’s limited time challenge not only offers players the opportunity to earn one of the first optional heroes (in case you missed it) but also offers the first two Memory Crystals. We’ve earned both already and offer some tips for those up for the challenge. 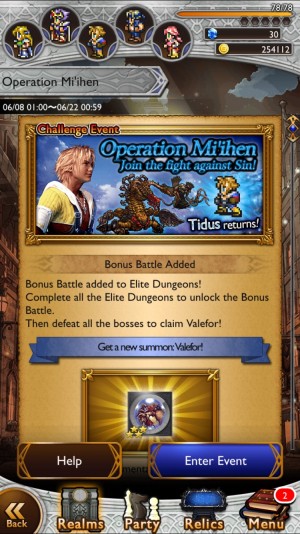 Prior to Record Keeper’s US launch, DeNA held a promotion where folks could sign-up on their website to express interest in the game. Heroes were eventually rewarded to those that “preordered,” with Tidus being one of several heroes immediately unlocked once the game went live. For everyone else that started after the fact, Operation Mi’ihen is the first opportunity to earn Tidus within normal play. For folks that have already had Tidus (for quite some time at this point), fret not for the Challenge also offers the opportunity to earn Memory Crystals for both Wakka and Tidus.

In terms of the event itself in Record Keeper terms, Operation Mi’ihen is a pretty basic challenge on the Classic difficulty. In fact, I took in a secondary team with levels between 25-30 and steamrolled through all the content (while having my 4/5 star equipment, of course). Tidus is the final reward on the last dungeon, with growth eggs being the secondary reward if you’ve already earned him. The last two Elite Dungeons are pretty hard, however, so make sure you have a full 50 team (preferably with Wakka and Tidus as well) along with your best equipment and abilities to survive.

Speaking of rewards, Operation Mi’ihen offers more than just Tidus and Memory Crystal as loot, there’s a lot of good orbs and equipment to be earned, especially in the Elite Dungeons. Besides the usual decent amount of mythril, the rewards of choice in Elite are by far Firaja and Safety Bit which offers a big resistance to instant KO moves. Instant KO isn’t something that you’ll probably encounter during your normal playthroughs, but it is there at the highest difficulties and it’ll be useful to have in those just-in-case moments. Obviously though, the Memory Crystals are the biggest rewards as they push the level limit from 50 to 65 for Wakka and Tidus (assuming they are already level 50) and also reward Record Materia, which are special power-ups that can only be equipped on characters that have had their level limits broken. 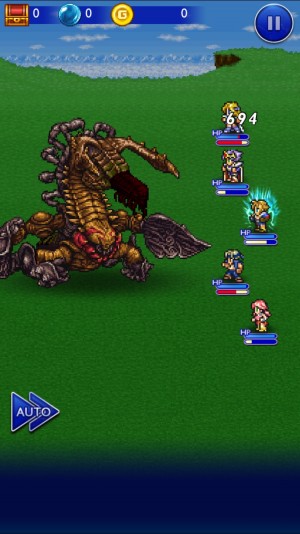 There aren’t a lot of bosses in this event, and most of the secondary objectives center around having Wakka and Tidus in your party (and making sure they don’t die during the boss battles). With that said, here’s a quick rundown on the major ones you’ll encounter:

Mushroom Rock Road – Valley Floor – Chocobo Eater: The first boss you encounter in this event is vulnerable only to Fire and will reward you with a secondary objective if you use it to cause damage. Chocobo Eater has a few moves but be wary of Thwack, which deals proportionate damage to all teammates.

Command Center – Interior 2 – Sinspawn Ammes: There are no vulnerabilities or resistances for Sinspawn Ammes. I’d recommend just taking out all but one of the Sinscales (taking out all of them will just have them respawn) and letting loose with all your damage dealing abilities until Ammes itself is taken care of. Gravity is the weapon of choice for Ammes, so make sure you have a Cure spell on tap just in case. On elite, the Sinscales do a lot of damage, so you really want to get rid of all but one as fast as you can to mitigate the overall team damage.

Sinspawn Echuilles: This second Sinspawn forgoes Gravity for a Water AoE attack. There’s also a drain spell that can be annoying. If you’re having trouble, follow the advice of Dr. Mog and use Blind, which will make its Drain attack pretty useless.

Command Center – Operation Control – Sinspawn Geneaux: You should take out Geneaux’s tentacles as they deflect magic attacks that are aimed at tis body. In addition, the body is also vulnerable to fire so feel free to use that (take care with water attacks as the tentacles absorb them). Al alternative method is to use Blade Bash or Intimidate on the body and ignore the tentacles. Use Armor Break and Double Cut to do some serious damage before it transforms into attack mode.

Sinspawn Gui: Gui is the last boss of the event and is not vulnerable to anything. I’d recommend taking out the arms first, and then damaging the rest of the body. The reason why you want to take out the arms first is because they mitigate damage to the body while they exist. Of course, the arms eventually grow back so make the most of your window of opportunity when you take out the arms. When the head starts moving, attack it to interrupt it from performing a high damage poison attack.

Tidus At A Glance 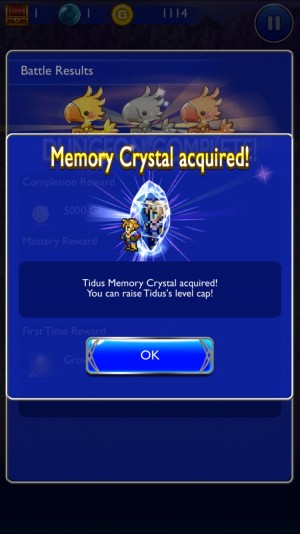 So now that you’ve unlocked Tidus, how should you use him? Well, Tidus is the third fastest character currently available, so obviously he’ll be attacking faster than anyone else on your team. He’s also pretty high up there in the base attack stats, although his defense is pretty middle of the road.

His default Soul Break is pretty cool as Delay Attack will attack and slow any one target. If you’re lucky enough to win his Brotherhood Soul Break equipment, you can let loose with Spiral Cut, which does damage to all enemies on screen. Speaking of  equipment, Tidus recently got a pretty cool update in terms of weapons, and can actually equip Blitzballs in additions to Swords and Dagger. Armor wise, Hats, Helms, Light  Armor, regular Armor and Bracers are available for use, so Tidus has a pretty decent variety in that regard.

Finally, Tidus’s skill set is centered around physical skills and can utilize Combat (Rarity 4), Celerity (Rarity 5) and Support (Rarity 3), which offers up a decent amount of available skills to check out. If you have the orbs, Leg Shot, Shadowbind, and Bladeblitz are all awesome skills to use.

Operation Mi’ihen is available until the 21st of June. I highly suggest everyone play though at least the entirety of the Classic Dungeon and the first half of the Elite Dungeons to pick up the Memory Crystals. Meanwhile, as always we’ll be there to report on the next even that hits Final Fantasy: Record Keeper.