It’s official, everyone: I’m nearly out of clever or interesting introductory paragraphs for roguelikes. So let’s just just get down to the business of why you should consider a spot in your likely crowded roguelike folder for Sproggiwood ($4.99). Hm, it feels like when I typed that name, all of the Aussies in the back of the room started snickering. Oh well. Sproggiwood tells the story of a mischievous little fellow named Sproggi, a guardian spirit who watches over a realm that is apparently doomed to destruction. Wishing to avoid that outcome, Sproggi does a little time manipulation to sucker a group of people called the Clogheads into helping out. The first of these is a humble farmer who Sproggi immediately tasks with taking out a dangerous boss jelly in a nearby forest. Sproggi warns you he’s a bit of a silver tongue, so you’ll need to mind that.

The first thing that will probably strike you about Sproggiwood is its humorous tone. It’s not the first roguelike to approach things with an overt sense of humor, but it doesn’t feel quite as forced here as I’ve seen in some other games. Sproggi acts as the glue (there’s that snickering again) that holds the story together, and his bumbling and trickery cause plenty of problems for everyone to clean up. The next thing that might catch your eye is the meta-game that has you building up your very own village. Clearing stages for the first time typically allows you to build a new structure, while also inviting new residents to your town. You can see them walking around and can even get some dialogue out of them here and there. Your town also has a shop that allows you buy a selection of items including character-specific gear, one-use boosts, and universal permanent upgrades. This gives you a nice feeling of lasting progress that helps salve the wounds of defeat. 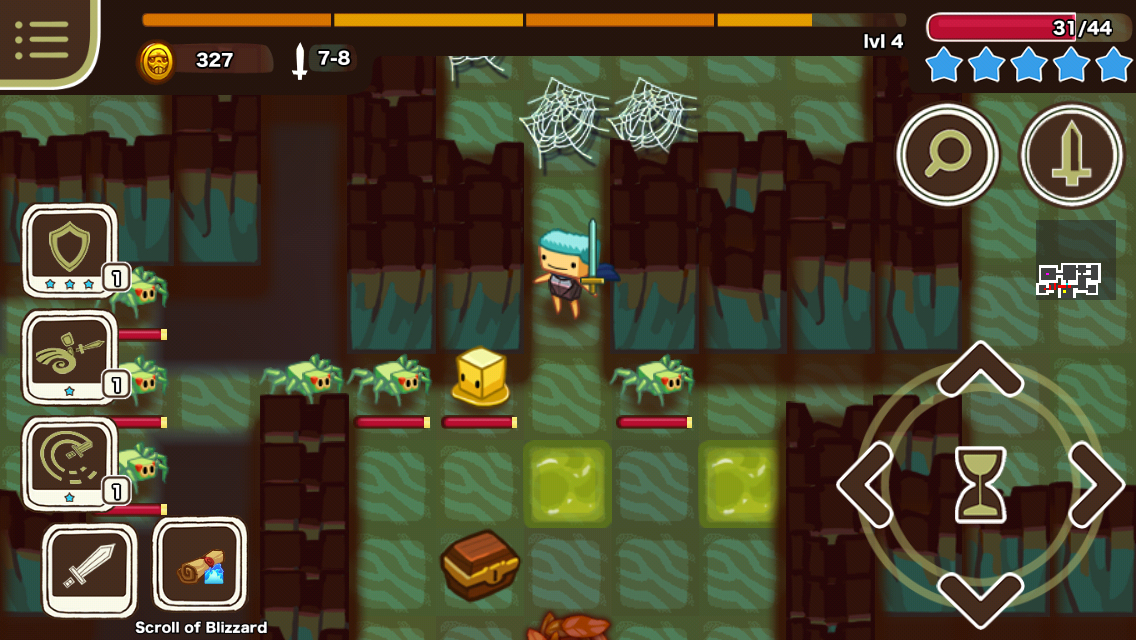 You’ll probably also take note of its stage-based structure, somewhat uncommon in a genre that usually has you simply going as far as you can. The levels in Sproggiwood only have a handful of floors each, making survival and meaningful progression that much easier to come by. The setup is pretty close to the traditional style. Turn-based, procedurally-generated stages, and a staircase on each floor leading to the next. The main difference here is that you’ll hit a boss before too long, and you have to take them down to finish the level. You can’t just dash your way to the end, even if you’re lucky. This element acts as something of a counterweight to the relative brevity of each session.

In all likelihood, the last thing that will strike you about Sproggiwood is how good its gameplay is. There’s so many other things going on, it’s easy to overlook that until you’ve spent some time with the game. It’s not doing anything dramatically different, but it does make a few wise decisions that elevate the whole package. In most roguelikes, you lose your experience and items when you die, making you start over with a blank slate. Sproggiwood is like that, but you’ll also lose both when you finish a stage, too. Because each stage is relatively brief, the designers have set the experience curve and treasure on a quicker schedule than you’ll often see in this type of game. A bar at the top of the screen reminds you that you’re never far from your next level-up, and the improved skills that come with it. Each level gained allows you to unlock or improve one of four skills unique to that character, and as the stages get longer and offer more experience, you’ll get to appreciate more advanced forms of each skill than you could potentially earn in earlier ones.

As for the gear, you can make immediate use of anything you find in the dungeons. You can carry one weapon, one piece of armor, a couple of accessories, and exactly one consumable item at any given moment. If you have something in your inventory when you stumble on a new item, you can either use the new one immediately, sell it off for coins, or replace the item you’re currently carrying with it. It’s kind of a bummer to find something cool and then lose it at the end of the level, and the game has a great answer to that. Anything you find is registered at the shop in your town, available for purchase if you have enough coins. Consumable items are obviously only good for one use per purchase, but once you’ve bought equipment, you’ll be able to wear it into a stage anytime you like. The tight limits on your inventory capacity encourage you to make use of things when you find them, rather than hoarding them like most people typically do. 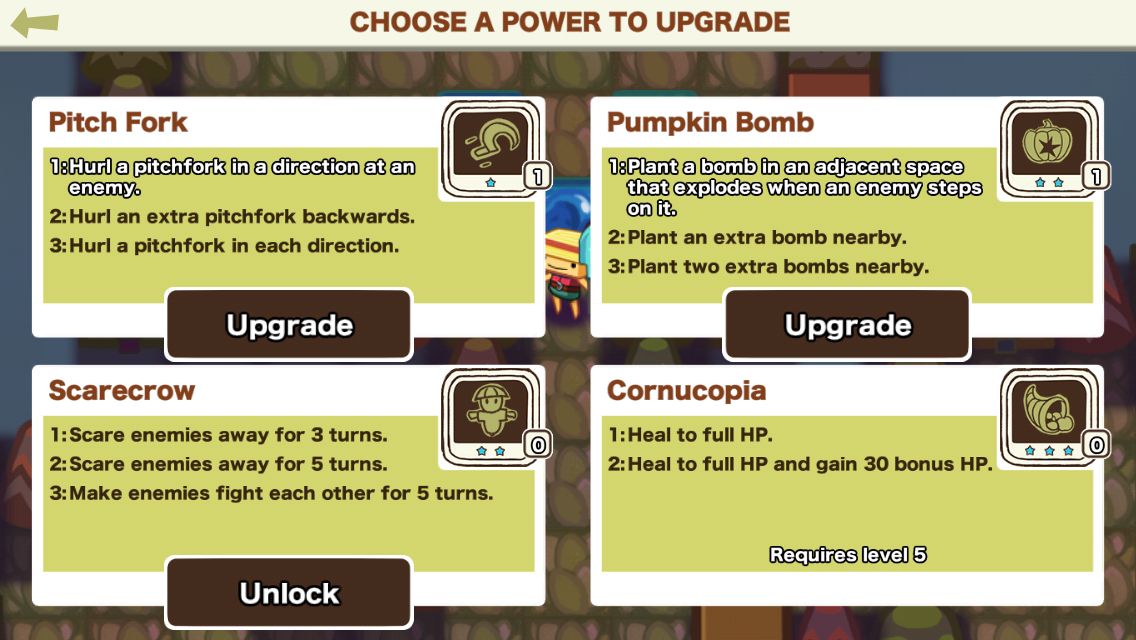 The way abilities work also feeds into that sort of mentality. Your character has a stamina meter which is partially consumed when you use a special ability. You’ll often find stamina restoratives after you defeat an enemy, and they come rapidly enough that you can freely experiment with your abilities. If you get surrounded and start using expensive defensive magic, you’ll probably run out, of course. But for regular exploration, you’ll usually find you’ve got more than enough to play around with, at least early on. The game also promotes experimenting by being somewhat lenient on you if you fail. Win or lose, you’re going home without the experience and gear but a little bit richer in gold coins. Restarting a level is as easy as tapping a button, sending you immediately back in with the same load-out you had selected. Alternatively, you can head back to town and see if you can pick up something new to help you get through.

It occurs to me I haven’t talked much about the different characters yet. While you start with a humble yet effective farmer, you’ll soon unlock other Clogheads as you progress. They each have their own abilities, weapons, and armor, and clearing a stage with each of them will give you a nice coin bonus. The different sets of abilities make for genuinely different experiences with each one, though I wish I could say the same about the loot they can find. For the most part, their equipment tends to have similar properties attached to a different noun. I feel like there was a missed opportunity here, but I guess it wouldn’t be good to give players too many items they may not be able to use if they’ve allocated their ability points in a certain way. As a result of the characters playing slightly differently and the game rewarding you for going through stages again with each one, you’ll not only get a bit of replay out of each stage, but also a more agreeable way of gathering coins.

There’s one more cool trick that Sproggiwood has up its sleeve. In some games, the difficulty settings don’t make a huge difference in the actual gameplay. Switching the setting usually doesn’t do much more than change a bit of math. In Sproggiwood, playing the game on the highest difficulty setting is like playing a whole new game. On the easiest setting, I would call the game a pleasant little romp in the woods, suitable for players who just want to enjoy the feeling of progression without the stress or tension that often comes with a roguelike. The enemies are as dumb as posts and will rarely pull any sort of tricks or strategies on you. The normal setting offers a good challenge, enough that most players will die fairly easily if they’re being reckless, but not so much that you can’t afford the odd mistake or two. Enemies will sometimes gang up on you, though they’re still pretty easy to lead around. On savage difficulty, enemies will hit harder, use new abilities, set traps, try to box you in, and more. In short, you have to play incredibly carefully if you want to get very far at all. I mean, I tapped the wait button to pass a turn so that the enemy would walk into my reach, and it didn’t. We’ve hit a new level here, friends. Anyway, it’s a real thrill, and if you’ve had considerable experience in the genre before, I recommend playing on that setting from the start. 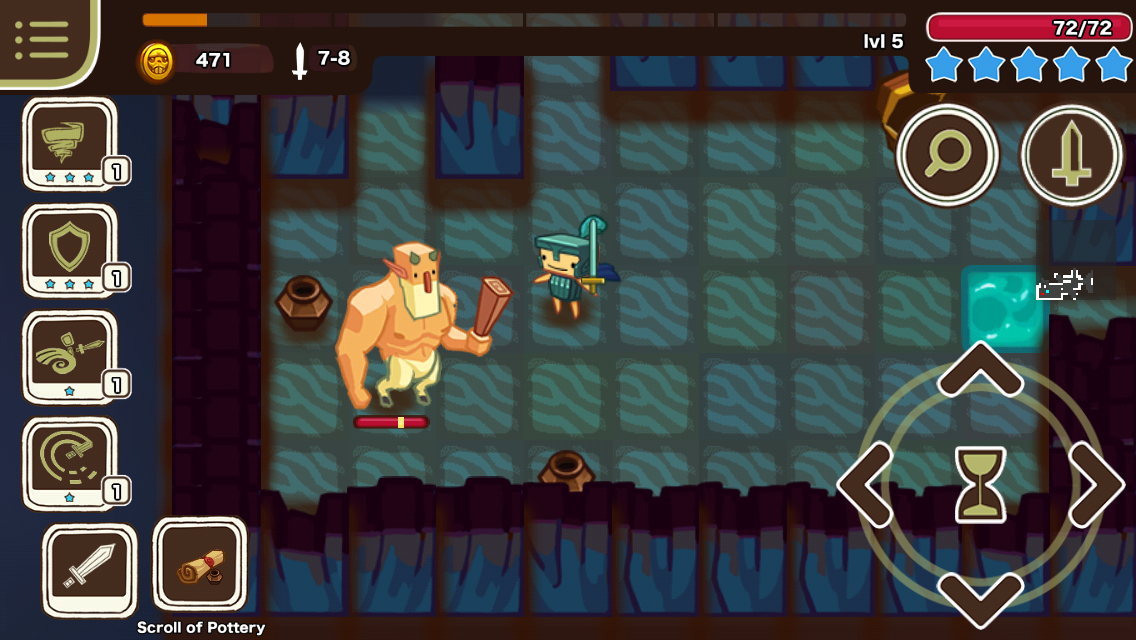 You don’t have to, mind you. Sproggiwood is courteous enough to allow you switch the difficulty on the fly, at least between stages. You only get one save file, so I’m very happy that option is in. You can also fiddle around with several other settings, most of which are related to the user interface. Sadly, no option exists to move the various elements around. I’d have preferred to have my movement controls on the left and my abilities on the right, but it’s not a big problem given the turn-based nature of the game. What is kind of an issue is that if the game gets booted out of memory mid-level, you get kicked back to the map when you restart. The stages are short enough that this isn’t a massive problem, but I don’t think I need to convince our readers that you never know when you might need to step away from a game at a moment’s notice. It’s something that I consider nearly an essential feature of a mobile game, and it’s unfortunate that some recent high profile roguelike ports have passed on it.

While I’ve got a couple of quibbles with it, Sproggiwood is a fantastically well-rounded take on the roguelike genre. It’s challenging, rewarding, forgiving, and charming all at once. Veteran players will get a lot out of the savage difficulty mode, while others will almost certainly find one of the other two difficulty settings to fit them well. I like that the game promotes playing in a fun way by throwing tons of things at you that you can’t store for a rainy day. It gets to the heart of one of the big strengths of the genre, the feeling of having to MacGyver an immediate solution from whatever you’ve got at hand. It’s a rare title that can satisfy players of varying skill levels, but I think Sproggiwood fits the bill nicely.