It’s not every day you get to say that a Tim Schafer/Double Fine creation just released, but today we can celebrate the iOS port of Grim Fandango Remastered($4.99). This is a game that for so many of us requires no introduction whatsoever. The stars have aligned and now we have another treasured piece of history that has been given new breath to once again delight and mezmerize.

For anyone wondering what I am going on about Grim Fandango is a pillar of video gaming history. When the elders of the gaming world sit around campfires telling stories, it’s about games like this. So what can you expect from the remastered edition? I can tell you that we are looking at a game that has visually weathered the test of time. An amazing new feature is a toggle that enables game creator commentary that trigger snippets when you target or use certain on screen interactibles. This in and of itself is more than enough reason to purchase the remastered version for those of you who have already played. The hilarious developer commentary is par for the course with Schafer at the helm. 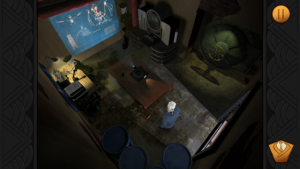 Grim Fandango is an adventure game. Some would say still that it is THE adventure game. You play as the protagonist Manny Calavera, a deceased individual working at an undead travel agency trying to work off his eternal debt to society. Like most adventure games, you get subtle clues that lead you to untangling puzzles and mysteries that lead you further into the day of the dead inspired world in which Manny exists. If there are any faults with the gameplay in general(and I would hazzard to say they are minimal) it would be that the pace of the action is pretty slow, and with the lack of in game tips or hints, it can be halting at times. Games in the 90’s were like that, you couldn’t expect to just breeze through a game without hauling out the 100+ page instruction manual or (later on) hitting up GameFaqs for help getting out of a rut.

One thing that has always really stood out to me is that this game was created in the very very early days of 3D rendering. In an interview, Tim is asked a question about what Grim Fandango was going to be bringing to the table. The question was framed in a tech sense, “better graphics? better sound? better interface?" and he just sits there and cocks his head to once side and basically just says story line. It was probably the last thing most gamers thought they wanted in a brand new game. What maybe they didn’t expect is that the graphic quality was great probably as a bi-product of the story being so compelling many of the designers of Grim Fandango still to this day cite it as their favorite. The remaster has really helped bolster the aging graphics with new lighting and visual touches. 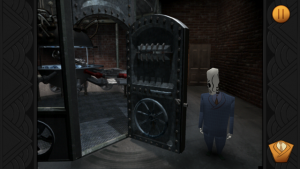 The audio tracks have been rerecorded by the Melbourne Symphony Orchestra and they sound amazing. Like any good noir story, the music becomes another living breathing character. The full orchestra treatment may not even be something you are consciously aware of until you turn off the game and experience life without it.

For diehard fans, nothing about gameplay has been spoiled by over-updating. I think that actually the tap targetting, for the iPhone 6+ at least, could have been improved on a bit more. If I have one problem with the controls it is that tap targets are a little too small in some cases. There are times when I tap the edge of the screen but Manny doesn’t exit to that side. Other times he doesn’t go through doors even when I see the tap reaction graphic animate directly over said door. It isn’t a major problem that breaks the game, but having to tap the screen 3-4 times to elicit an expected action gets a little on my nerves. One thing I DO like about the mobile adaptation is that it is very easy to solve a puzzle or two and put it down. The save system is quick and intuitive and there are very very few times the action gets too involved for on the go gaming.

Grim Fandango at it’s heart and soul is about the story, and it is an amazing one. Even if you leave the awesome developer commentary off, you can tell that talented people poured their blood sweat and tears into it. For someone completely brand new to this game, you might need some patience and at times possibly an online walkthrough to help through the tougher spots. But remember, its not the toughest game, after all you can’t die in the land of the dead. If you ever thought of playing an adventure game, this is the rosetta stone that has been out of print for too long, go get it!