Physics has always been a staple of the App Store. Slingshot Physics, Ragdoll Physics, Skateboard and BMX physics, and so on. Playing a game with finely tuned, consistent physics just feels so right. I don’t know why these games are always so popular, but man, are they satisfying. That’s how I’d describe Ball King(Free) from developer Qwiboo. Eminently satisfying to play. 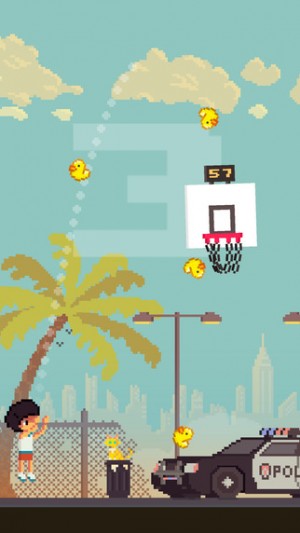 The simple, unassuming name and app icon are hiding a real gem here. Ball King is a fantastic high score timewaster. You’ve got two modes to choose from. The first is Challenge mode, in which you see how many shots you can land in a row. The simple touch controls bring up the arc of your shot to be adjusted accordingly, while the basket randomly changes places all over the right side of the screen.  It’s a super simple concept, well executed. After a few sunk shots, you’ll also have to deal with three factors of wind blowing in either direction, and that’s where the boys are separated from the men. The sheer volume of basket combinations and wind factors keep the game challenging no matter how much you play.

The second mode is Time Trial, in which you score as many points as possible in sixty seconds. A clean shot, meaning a swish, is worth three points. If you hit three clean shots in a row, you are now on fire. Any shots landed whilst aflame are worth five points. Not only that, but clean shots also add time to the clock equal to their point values. When the clock is done counting down, you get all the time in the world for your last shot. And yes, you can extend the clock by three or five seconds here as well, pretty much infinitely if you’re a bad enough dude/dudette. Strategy! In both modes, you can collect random floating currency, and letters that spell out “BALL" and “KING." Like a mini-game of HORSE I guess, but it’s very hard to get them all, and I have no idea what happens when you do. 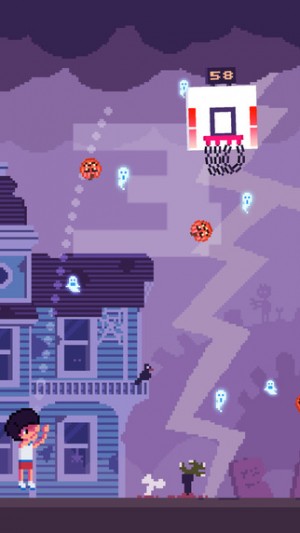 Because the game feels so skill based, it’s easy to find yourself in competitive spiral of endless replays while you try to top your scores and climb those leaderboards. I don’t throw the word ‘addicting’ around often. It’s way over-used in mobile gaming and gaming in general. But Ball King is seriously addicting. I threw some random podcast on and played all the way through it, one hour straight, without even realizing it. Time flies as fast as your throws with this game, and sessions are always short, making this a perfect time killer. The general sound effects of bouncing balls, chain baskets, and cheering crowds with each clean shot are all very well done and only enhance the great game feel.

It’s not just the solid physics and gameplay that make this game amusing. The pixel art featured is as charming as it is simple, which is to say very. The use of color is great. Not only will you be throwing basketballs at this basket, but you’ll also be throwing soccer balls, baseballs, snow balls, severed zombie heads, tree frogs, turkey legs, rubber duckies, cacti, floppy discs (humorously called Save Icons), and a whole lot more. There are around 50 random ball-substituting objects to unlock, and all of them share the same physical and aerodynamic properties of a basketball somehow.

They mostly come with neat sound effects and visual effects too. The Tree Frog chirps, the already cooked turkey leg gobbles, the big heart expels floaty hearts, the skull scatters bones everywhere, the fishbowl is some kind of portal to the ocean where endless fish can come flopping through. You get the idea. All these effects are cute or fun in some way, and it really makes you want to keep playing to unlock more. In that regard, Ball King uses a very Crossy Road(Free) unlock system. The diamond currency can be collected in game, through watching ads, or with a free gift. Each time you accept the free gift, the timer on it gets longer and longer.

You can buy any ball for one dollar IAP, or try to win them by spending one hundred diamonds on the mystery prize boxes. You can and will get duplicates though. There’s no guarantee of a new ball. You can also buy the Piggy Bank, which adds higher value diamonds to the mix, gives you 1000 diamonds to spend, and makes ad watching worth twice as much. There are several maps beyond the starting city street map. You unlock these by collecting a themed set of five balls. The skull, zombie head, jack-o’-lantern, etc, are used to unlock the scary house map. All ads and IAP are completely unobtrusive and out of the way, which is great.

The game isn’t perfect, even if it’s close. It’s a bit buggy on launch. I’ve had the sound randomly cut out on me after watching ads, the game crashed once. The mystery prize box didn’t appear when I had a few hundred diamonds and could afford one. If you want to randomly cycle through balls, you can, but every time you unlock a new ball, you have to set it to random again. The developers have been addressing the community in our forums with answers and tips. For example if you want to improve performance/battery life, you can switch off automatic replay recording in the settings. Which reminds me! You can save and upload your best and most intense runs to EveryPlay. It’s a nice feature. I don’t really know what else to say. I’d conclude on some kind of hackneyed ‘slam dunk’ pun, but there is no dunking in this game. Just check it out already.