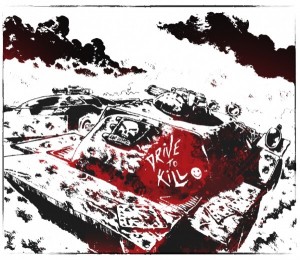 Auroch Digital, the company behind the Chainsaw Warrior adaptations and responsible for the fascinating takes on warfare that was Narco Guerra and Endgame: Syria, is rebooting the Games Workshop cult classic boardgame, Dark Future, just in time for the upcoming global apocalypse.

The boardgame was originally published in the 80s and has a very Mad Max vibe (which makes its reboot very appropriate since the Mad Max franchise is also undergoing the same process at the moment). The running and gunning took place in a world where corporations controlled high-tech gated communities while the rest of the world was split into decayed “NoGo" urban sprawls and lawless shanty towns (yes, I know this all sounds cliche now, but remember, this game came out in the late 80s). The game pitted players against each other in various scenarios, for example one player having to outrun the other, who would be bent on taking his adversary out by any means. Apparently you could shoot various parts of the car, which when damaged would make the car behave in all kinds of weird ways like losing maneuvaribility and brakes.

The reboot, titled Dark Future: Blood Red States, will play out in simultaneous real-time action, and its gameplay will combine high-speed maneuvers with chain guns and car-to-car smashing. Even though I’ve never played this game, I do enjoy games that mix different kinds of gameplay like car driving and shooting. In a way, it sounds a bit like the new Star Wars miniature games where players need to combine maneuvering with shooting at each other (of course, I could be way off). I just hope that the game has a robust multiplayer mode that allows for asynchronous play. We don’t have any images from the actual game yet, but we did get a very, very cool trailer. The game should be coming out Winter 2015 if all goes well.