Rebel 1…. Action! Full disclosure up front; if you couldn’t tell. I freaking love the BlazBlue games. Not only are they complex, highly competitive fighting games, but they have a genuinely awesome story that is actually the focus. The mastermind of BlazBlue, Toshimichi Mori, has even said his intention was to create an epic fighting game saga with a deep, interesting  story that mattered from game to game, which is pretty much the opposite of the standard. Also, the soundtrack is pure excellence to my taste. Tons of epic Prog Rock/Orchestral hybrids. Very metal. Listen to This song here to get psyched up while I tell you about a brand new iPad exclusive BlazBlue  Collectible Card Game (CCG), BlazBlue: Battle Cards.

I mention the uniqueness of BlazBlue ‘s story because this game is also unique. The intent of developer Metaversal Studios was to really approximate a fighting game battle through a card battle, and they seriously succeeded at this. It’s super novel at first as each of the 5 cards you pull into your hand are various punches, kicks, throws, projectiles, specials, or even dodges, guards, and counters. Like in a fighting game, space management is extremely important. You’ll have to visualize the space here, but the mechanics pick up the slack. Every card has a set amount of reach, and as you use attacks and “knock" the enemy farther away, you’ll need a longer reach attack to continue your attack chain. 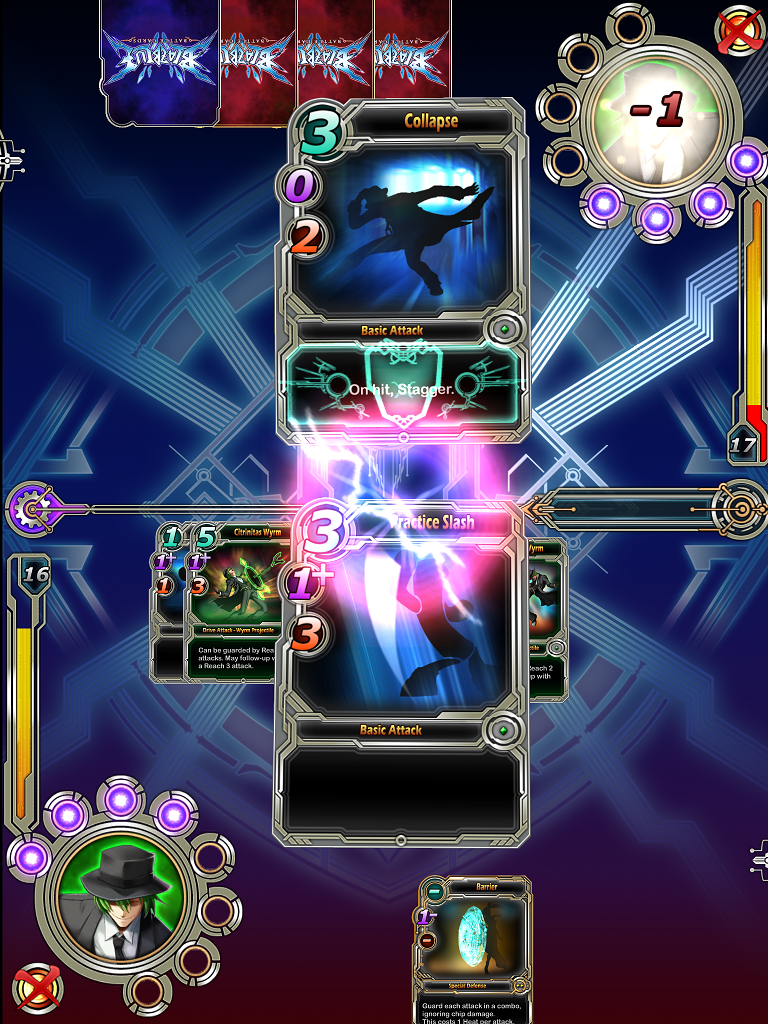 Each attack also either spends or generates a certain amount of Heat, which is used to activate more powerful cards, many of which are harder to avoid or extend your turn in some way. The final number you’ll see on the cards are damage done. Whenever you attack someone with a card, they can use a card of equal reach to block, taking only 1 point of chip damage instead, but you can’t kill anyone with chip damage. It has to be direct. See what I mean? It’s so neat! You can also chain attacks together more directly in combos. Your opponent will have a chance to block each attack, but if they fail to block, the rest of the cards in the combo will automatically hit. However, if they counter or dodge your attack with cards that serve those functions, your combo will be nullified, and any cards that haven’t been used yet will be discarded.

There are lots of nice little touches. For example, throws are the only cards with 0 reach, and can only be blocked by other throws, or cards that specifically allow you to avoid or counter throws. You can often build very strong combos off of throws, as people are less likely to have counters. This is also the way I’ve used and seen tons of people use their Bursts. Oh yeah. You get one ace in the hole in the form of the Burst. This can be used defensively in a Burst Break, only against the first attack in a combo, to nullify that combo and end the round, giving control to you. It can be used offensively to activate Overdrive, which lets you restart your reach counter and continue attacking while also preventing the enemy from using their Burst Break to escape your onslaught. Scaring someone into wasting their burst early is very satisfying. You only get to use Burst once per match.

Naturally, as a CCG, you’ll be buying and opening card packs, either with in-game currency (Souls) or in-real-life currency. A pack is 200 Souls, and you get 5 Souls per win. That sounds awful, but you do get at least 2 daily missions called Bounties which offer higher rewards. You should be able to snag a pack every day or two. That being said, this game is completely free, so if you want to support the devs by buying a few core card packs, you’ll make things a bit easier for yourself. Many of the universal cards (as opposed to character specific cards) have alternate versions with the same stats, but also have abilities attached, such as drawing cards or staggering on a hit, which is basically a stun. Using staggers and other status effects efficiently can put your opponent at the mercy of massive damage combos. And they do get massive. I was hit with a 12 damage combo and died when my opponent had 3 health. Building your own decks is made easy, and the interface tells you outright how many cards of each reach are in a deck, which is important for balance. 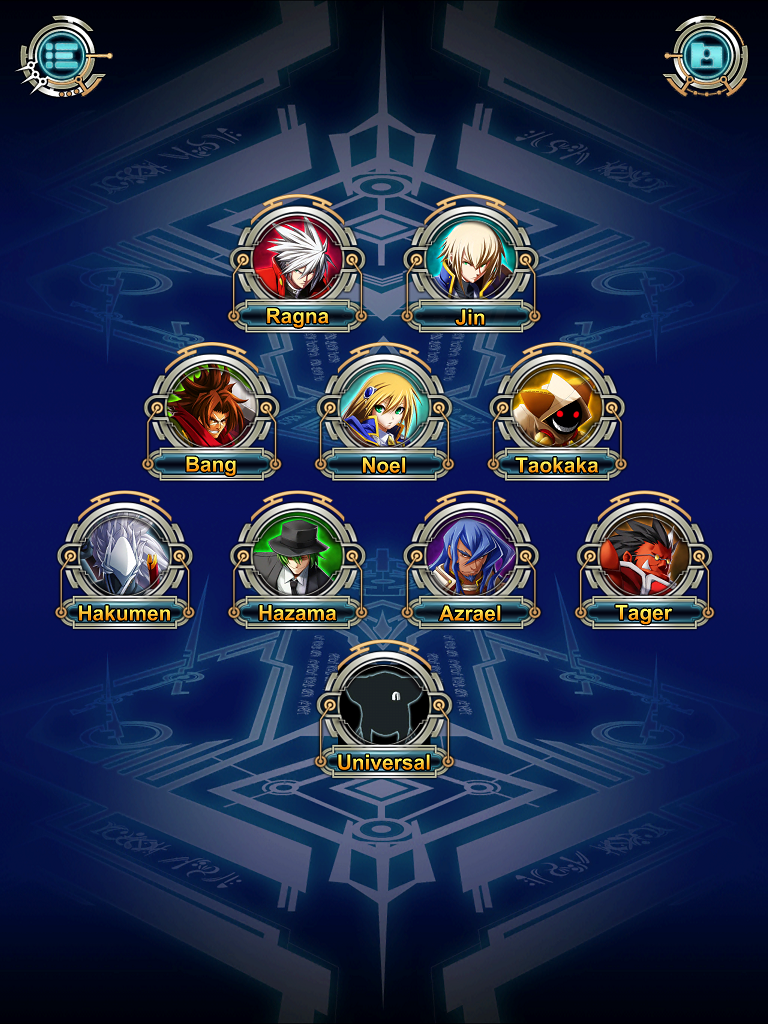 You get to play as one of the 9 available characters, and each one has abilities emulating their fighting game selves. Ragna the Bloodedge has several attacks that drain health and is good at managing his Heat. I had one Ragna vs. Ragna match in which our health bars completely switched before someone finally won. Hakumen’s power is that he’s extremely annoying, just like in the main series! He can only gain one Heat at the start of each round, but he is like a walking talking counter. He will counter your stuff. All day. Every day. And through deck customization he can be made even worse!

Here’s another song in case that other one finished. The quick and nimble Noel is focusing on chaining attacks by changing the reach values of her cards. Hazama as several high reach, low damage cards that effectively reset your reach to lower numbers very often. He’s very chaotic, unpredictable, and a masterful troll, just like in the main series! Azrael is pretty much the toughest son of a biscuit in the entire franchise. He is absurdly strong, with unmatched bloodlust. This is reflected in his ‘Weakpoint’ attacks, which leave upper and lower Weakpoint markers on a character. A character with one or both Weakpoints active is royally screwed. I’m not going to talk about every character. You get the idea.

A lot of the most iconic moves from the main series have card versions, including distortion attacks and fabled astral attacks, though astrals are extremely rare and hard to pull off. Characters also have different starting HP for further balancing, and the team has already said in our forums that they’re working on new characters. (Psst… I’d really appreciate Relius instead of Carl, Makoto, and also Kagura because he rules). The variety is great, and you’ll find yourself in nail biting matches pretty often. I had one match that was 1 health vs. 1 health for three straight rounds. We just could not kill each other. One thing I wish would be added is an instructional text to reference if you forget a rule. I had missed/forgotten that a combo length is determined by the damage of the card starting the combo.

Those are my main gripes with this game. Things involving logistics and stat tracking and the like. I want character abilities to be better explained to new users. You have to figure everyone out through trial and error. The very few times that you’ll read character dialogue, it really feels like the character is speaking. You know what I would absolutely love to see in this game? Character sound bites. The voice acting in this series is phenomenal. How freaking cool would it be to hear Hazama throw out a “DIE! DIE! DIE! DIE! DIE!" when he does big damage or uses a distortion, or to hear Hakumen throw out random gravelly robot voice lines about justice as he’s apt to do? Maybe even just stuff that Arc System Works already has recorded and archived. It would be freaking cool, is all I’m saying.

If you liked the music I provided, you’ll be glad to know you can listen to any of the available songs as you play, mainly from the third game, Chrono Phantasma. This game just needs a bit more to step above and beyond the competition. Currently you can play online in simple matchmaking, and as far as I can tell, you can’t play against friends. The interface is slick looking, though others are finding it clunky. I had no issues, and I like the style of it. The card art is very cool too. As this game is visually simpler than other, similar titles, I feel like it could easily work on a smaller iPhone screen. As of right now, it’s compatible with every iPad except the first generation. BlazBlue  is a very different series, and it’s not for everyone. The story is convoluted and very anime (a.k.a. weird). There’s a lot of terminology to learn, and that’s true in this card version. Regardless, the BlazBlue series has gained a strong following over the years for its solid game design. Hopefully this free iPad game does too. Well worth a look.