Over the weekend I was lucky enough to get invited by WWE to come hang out with the WWE superstars before the Extreme Rules pay per view and get some really cool video of WWE Superstar Sheamus playing as himself in WWE Immortals (Free). Sheamus is one of the core characters of Immortals, and was available at launch, so if you’re playing the game chances are you’ve got him in your roster of fighters. If this is the first you’ve heard of the game, you’re in luck. We’ve got a review to read, one guide on how to navigate the free to play elements, and another guide focusing how to beat the game’s various in-game challenges.

If you read the headline and are here for the delightfully meta video, I’m not going to keep you waiting. Everyone else interested in WWE and some answers to some things we’ve speculated about on our podcast, be sure to read on.

Backing up a bit, walking through the press gate at a WWE event is a pretty incredible experience, particularly if like so many wrestling fans in the “Reality Era" you’re somehow always trying to “figure out" WWE. The company masterfully provides hungry viewers these intentionally brief glimpses beyond the kayfabe curtain through products like Total Divas, the Live! With Chris Jericho show on the WWE Network (or the Talk is Jericho podcast) and other behind-the-scenes-but-not-really shows. Everything that’s “revealed" or otherwise speculated winds up on various WWE-centric communities on the internet like r/squaredcircle and it’s incredibly fascinating, even as an adult, truly not having any idea what is and isn’t real.

So here I am, escorted through the press gate by a WWE representative, waiting in the catering area (which is often featured on Total Divas). Standing in the doorway is a cheery Dolph Ziggler happily in the middle of his own interview, and a sea of WWE Superstars inside just chowing down on the massive array of catered food available. I arrived super early, so I was told to just take a seat and grab some grub if I wanted while I waited for Sheamus. Instead, I just watched as all my favorite WWE stars essentially just hung out with each other in their street clothes.

It was remarkably humanizing, as you really only ever see these people greased up doing super-human feats on TV following their pyro-filled entrance versus doing something… Totally normal. This is quickly followed by an internal monologue of something along the lines of “Well of course they just do normal stuff." But, normal activity or not, they’re still huge guys. Big E is massive, Kane is terrifyingly huge, the “Big Guy," Rybak, is also enormous. There’s no camera tricks to make these guys look crazy-large. 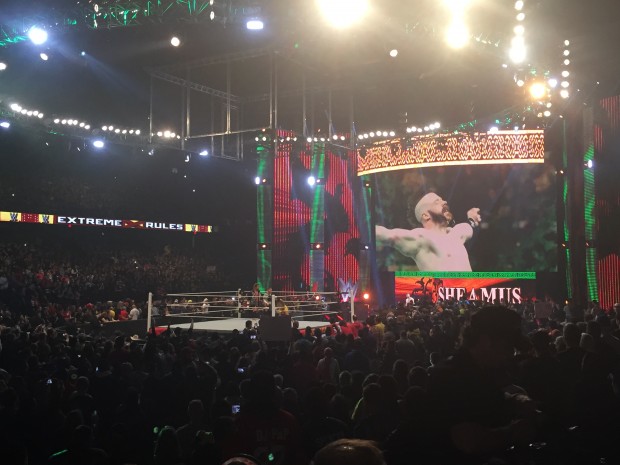 As I sat there marveling over just how massive Kane is compared to Damien Sandow (who looks huge on TV too) sitting to his left, it was time to meet up with Sheamus. Breaking the ice a bit, we talked about his role in WWE Immortals. If you’ve been following the WWE universe, you’ve no doubt seen Sheamus’s new look, which seems at least headed in the same direction as his ancient druid self in-game. This wasn’t totally intentional, but seems to have worked out pretty well in the end. Sheamus was super-jazzed to be in the initial lineup, particularly with the incredibly vast pool of WWE superstars to pull from.

On the topic of Sheamus’s look though, I couldn’t help but ask how he feels about the whole “You Look Stupid" chant that’s going around now with his new heel turn. Turns out, he loves it, as in the world or professional wrestling you always want people talking about you- There’s nothing worse than a dead crowd. He mentioned all the memes people have made, and all the other lengths folks on the internet have gone to, is all just fueling him as a wrestler. It makes a lot of sense, as love him or hate him, he’s got the whole audience involved. On a similar note, at the actual Extreme Rules event, even though the internet as a whole seems to vocally hate Roman Reigns, absolutely everyone was on their feet with their phones out to take a photo of his entrance. 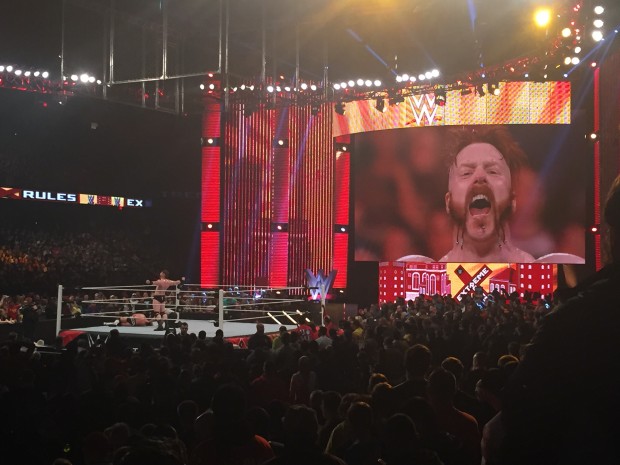 On the subject of the internet, I couldn’t help but ask Sheamus how the instant-access that fans have to wrestlers via Twitter and how everyone on the internet is sure they’ve got what WWE is going to do next has changed anything for him, and he said it hasn’t- People still don’t know what’s going to happen next, even if they think they do. It’s true, and one of the many reasons I love WWE so much. Not only does it never stop, but you never know what’s going to happen next.