After meandering deep inside Hearthstone‘s (Free) Blackrock Mountain these last three weeks, we’ve arrived at Blackwing Lair, Lord Victor Nefarius’ seat of power within Blackrock Mountain. Nefarius tinkers with blood of the various dragon flights to create an unstoppable army (it’s not an accident, I think, that Nefarius’s name, Victor, is the same as another famous scientist’s, Victor Frankestein). This week’s Wing is definitely feeling more dragonlike, with the likes of Razorgore, Vaelastraz, and Chromaggus being the first three bosses and their creator, Lord Nefarius, who turns into a Dragon, awaiting you at the end.

If you haven’t played any of the wings so far, and you are the kind of person who likes to do things in order, use these guides to defeat the previous three wings:

Now, let’s go get Nefarius and his minions.

Razorgore (30 Health on Normal, 30 Health 15 Armor on Heroic) reminded me a lot of an earlier BRM boss, Garr from Molten Core, who had ticking time-bomb minions that you had to plan your strategy around. Razorgore’s Hero Power “The Rookery: Give all Corrupted Eggs +1 Health, then Summon One," allows Razorgore to drop a Corrupted Egg (0/1 in Normal and 0/3 in Heroic) each turn which, if left on the board, will gain +1 health each turn. In Normal difficulty, Rookery costs 1 Mana, but in Heroic difficulty, it’s free, so expect more Eggs to be droping. When a Corrupted Egg reaches 4 health (or 5 health in Heroic), it hatches into a 7/3 Chromatic Drake (7/7 in Heroic).

Obviously, since you have a Boss that tries to fill the board with eggs that hatch if not killed, be sure to carry plenty of AOE spells to reset the board often. It’s important not to allow the eggs to fill the board because even though their lack of Attack might make them look unthreatening, Razorgore will often play Bloodlust! and you’ll end up with barely any health in a single turn. So, get those eggs off the board as often as you can. Trying to use Taunt minions to protect yourself is also not a great strategy because Razorgore carries Corruption, which destroys your minion on the next turn. Bring plenty of low-cost high-attack minions (or minions with Charge) to help you keep the Eggs from hatching. His deck has a lot of synergy because of all the Dragon cards, so expect to have to face Volcanic Drakes and huge Drakonid Crushers.

If you are having a hard time beating Razorgore and his many eggs, try ReganisPrime’s Egg Controladin:

When you defeat Razorgore, you’ll receive two copies of Revenge, a Warrior Spell. This spell wasn’t very warmly received when it was spoiled last month because it damages all minions rather than just your enemy’s. The only place I see it being used is if you want to get those Grim Patrons (or similar cards) running wild.

This Boss was quite fun to play with as he’ll try to mill you (not a common strategy from AI bosses). Because his Hero Power will force you to draw 2 cards every turn, plus the one you’ll draw normally, make sure you carry lots of ramping up cards (Innervate and the likes) as well as many low-cost minions so you don’t end up losing cards because your hand’s too full. Of course, avoid any cards that help you draw from your deck since this Boss’s Hero Power does the job for you. Vaelastrasz will use Gang Up to keep his deck from running out, so you might want to carry that card too to avoid being Fatigued. He’ll also drop Clockwork Giants, so be prepared to face (or copy) some 8/8 minions. In general, this boss is quite easy to beat as long as you have ways in your deck to play lots of cards as often as possible and also ways to force him to draw more cards than you so he can Fatigue first.

If you’re having a hard time beating Vaelastrasz, use DrukMax’s Aggro Mill Druid:

Beating Vaelastrasz for the first time will get you Flamewalker, a Mage minion. This minion could work well against Aggro decks that try to flood the board since it gives you some extra removal on top of whatever spell you play. The fact that it damages all minions makes it a bit less useful, but if you are struggling for board control, you won’t have many minions on the board anyway.

I really enjoy all the different ideas that Blizzard has been bringing into BRM so far, and the Chromaggus Boss is no exception. Chromaggus has 30 health and no armor (60 health in Heroic), and every turn he’ll use his Hero Power “Brood Affliction: At the end of your turn, add a Brood Affliction card to your opponent’s hand" that will add one of the Affliction Cards to your hand. The Affliction cards do things like “Restore 2 (6 in Heroic) health to your opponent at the start of your turn," or “While this is in your hand, take 1 (3 in Heroic) damage at the start of your turn," etc. As you can imagine, these cards really force you to change up your card plays because you can’t keep the Afflictions on you for too long. However, Chromaggus will also be playing Chromatic Dragonkins, which gain Health and Attack every time you play a spell, so you need to be careful when playing the Affliction cards. Silencing is a useful ability in this fight since you can take care of the Dragonkins and the pumped Twilight Drakes Chromaggus will be playing. What you can also do is bring cards that deal damage or get stronger when you play spells so you can gain a benefit from being forced to play the Affliction Cards. I had success using Emperor Thaurissan in this fight because that allowed me to play more cards while still getting rid of the Affliction cards. Any cards that can shorten the fight, like Alexstrasza for example, can also be useful in this fight.

If you are having trouble killing Chromaggus, use Crawford881’s Druid Deck:

Defeating Chromaggus will get you Hungry Dragon, a strong 5/6 minion for a low 4 mana cost that will be featuring in many Dragon decks. This card can help strengthen the mid-game of many decks and will probably work best in decks that can take out minions easy (including the one summoned by Hungry Dragon’s battlecry).

While you might be expecting to battle Lord Nefarius in the final Boss battle, you’ll actually be playing the Dragon Nefarian (30 Health 30 Armor in Normal, 30 Health 50 Armor in Heroic) since on the first turn, Nefarius uses his Hero Power “True Form" and changes into Nefarian. Nefarian’s Hero Power is “Wild Magic: Put a random spell from your opponent’s class into your hand," so expect to have to face your spells during this fight. In a fun twist, you get Ragnaros on your side during this fight, and he’ll give you a random card each turn (in Heroic, you get a SINGLE card at the start of the fight and that’s it). The cards you might be getting are Son of the Flame, Whirling Ash, Living Lava, and DIE, INSECT!. Don’t expect to be fighting a fair fight with this Boss as Nefarian will always have A LOT more mana than you (10 mana from turn 2 onwards), so expect some dangerous cards very early on. You might need to play control in this fight, hoping to stay alive long enough to get your strong cards in play. Carry plenty of removal spells to keep from being overwhelmed because Nefarian will be playing many minions every turn.

His Heroic Decklist is:

If you need some help defeating the final boss, use Celadoncvo’s Mill Druid:

Defeating Nefarian will give you Fireguard Destroyer, a Shaman minion. This guy will find a place in many Shaman decks because of his strong body and the possibility that he’ll become a 7 attack 4-cost minion. However, sometimes you’ll hope he gets a lower attack than that to keep him out of Big Game Hunter Range.

Defeating all of the Bosses of Blackwing Lair will get you the Legendary Chromaggus, an interesting Dragon card that stays just below Big Game Hunter and has high health, so he’ll be a pain to remove from the deck. His ability to generate card advantage by putting a copy of each card you draw into your hand can be devastating for your opponent, assuming you draw the right cards. Combining this card with other card-draw effects will give you plenty of options to take out your opponent.

In this challenge you’ll be fighting Vaelastrasz the Corrupt, and defeating him will give you Dark Iron Skulker, a Rogue minion that can do some good damage if played correctly. Still, his stats are a bit low for his cost (4/3 for 5 mana), and his removal a bit too situational (he hits only undamaged minions), but if decks that flood the board with minions come back in fashion, he’ll be seeing more play.

As with the Boss challenge, expect to have a lot of cards drawn every turn, so make sure you play cards when you can to avoid burning cards because your hand’s too full. You’ll be drawing Preparation a lot, which should allow you to get plenty of spells off and avoid having too many cards in your hand. Use your Sap and Vanish spells to clear the board often and save your Gang Up cards to steal any of his strong minions like Molten Giant (and help avoiding Fatigue). Use your Preparations often, keep the board clear, use your Weapons to attack face, and this challenge will be done quite easily.

In this challenge you’ll be fighting Razorgore the Untamed, and defeating him will give you Demonwrath, a Warlock spell that’s a good fit for zoo/demon decks and can clear the deck nicely while leaving your demons untouched.

In this challenge you’ll have to work with this pre-con deck:

As you can tell, the deck consists mainly of demons plus cards that synergize well with demons. As in the Razorgore Boss fight, you should try to control the board by taking care of the eggs each turn. Demonwrath will be very helpful here because it can take care of the eggs without harming most of your minions. Try to get the Imp Gang Boss minions going and then use Defender of Argus and Dire Wolf Alpha to strengthen your board control even more. This challenge shouldn’t give you trouble as long as you play to the strengths of the Demon deck you are given. 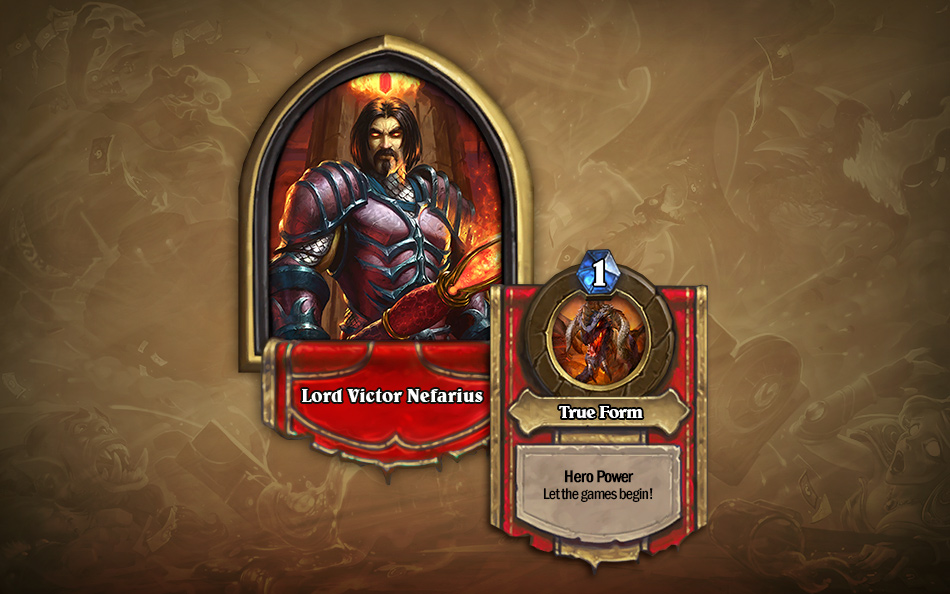 I hope you made it through Blackwing Lair without dying too many times and gotten your hands on those sweet cards. We’ll be posting a F2P Guide for this wing soon so keep an eye out for that. I’ll see you all next, and final, week when we attempt to take down the Hidden Laboratory.