Shades ($1.99);the notably unique Tetris like puzzle game came out late last year and flew under the radar. Since it’s launch the game has grown a huge following, been featured by Apple as their ‘Free Game of the Week’, and even been recreated within Minecraft by seriously dedicated fans. A recent major update of the game and the release of Shades Free (Free); made me take notice and have a closer look. If you love sleek design and you’re good with color like me then you should definitely take on this challenge and give Shades a try.

The graphics are ingeniously simple as are the rules, but as you start to play you soon realize that the game play is anything but easy. It feels like a subtle brain workout. At first it looks like a manageable version of Tetris but as you start to get into it, you realize that there is another level of complexity below that changes everything. Blocks merge and darken as they land on blocks of a similar tint below them, and merged blocks then merge again to create darker blocks, creating a domino effect. It’s quite tricky to get your head around at first, but once you do, you’ll be amazed at how fast you start to develop your own strategies to dig into the growing pile of blocks below.

I’ve really enjoyed playing this game; it’s so straight forward with no complicated controls. The developers UOVO, a two man team from Denmark, have done a great job at simplifying game play. You can easily click the screen to move a block left or right as it drops and swipe down to speed up the block. The screen also shows a vertical panel to indicate where your block has moved to and it’s new trajectory, which really helps. There is a simple 3 step tutorial you can try at the start to get you going, which only takes a few seconds, and then you are off. 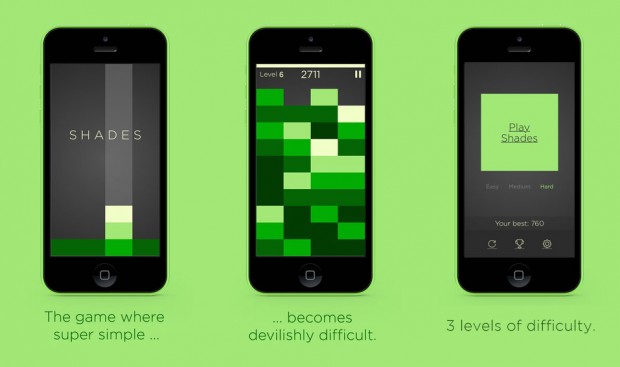 Clearly Tetris is the biggest inspiration, but Shades also reminds me of Threes and Two Dots. The game was also clearly inspired by the flat, minimalist design of IOS 8 and it’s pretty cool that the game also derives the in game hues from the colors of the iPhone C. If you’ve played Tetris, and let’s be honest who hasn’t, then the game play will feel familiar. The goal is basically the same; blocks are falling; your aim is to create lines of the same blocks. As you progress through the levels, the blocks speed up; pretty standard stuff. I found it easier to play than Tetris, no need to spin the blocks, so you can move quite quickly and focus on strategy.

The challenge comes from the fact that the merging blocks can easily change the landscape below. While this all sounds easy, the real test is managing the colored blocks so that they don’t prevent you from creating and clearing a line. One simple principle to succeed is to avoid putting a darker block on top of a lighter one. If you plan ahead right you can merge multiple blocks all at once, which can turn the tables quickly. As expected you will not always be given the lighter shades you need, so getting a perfectly organized set of blocks probably won’t always work. Some of the talk about the game in our forum pointed this out as well, and expressed frustration at struggling to save a game from failing once they had the blocks in the wrong order.

One small trick… If you want to play with a certain color, tap the refresh button before starting a game. This will cycle through the colors randomly. I found pink and green easiest to play with, some of the blue hues are a bit too close, which make differentiating them difficult.

As you clear out lines and merge blocks, you will earn more points and then advance to the next stage. The higher the level, the faster the blocks will drop. You will need to have super fast reflexes in order to get the blocks where you need them to be. Once a stack of blocks reaches the top of the screen, the game ends and you start over. I found the game a lot easier to play on iPhone than iPad; on iPhone you get more rows before you hit the top, which means you have more breathing space; which makes for richer game play and ease of recovery. 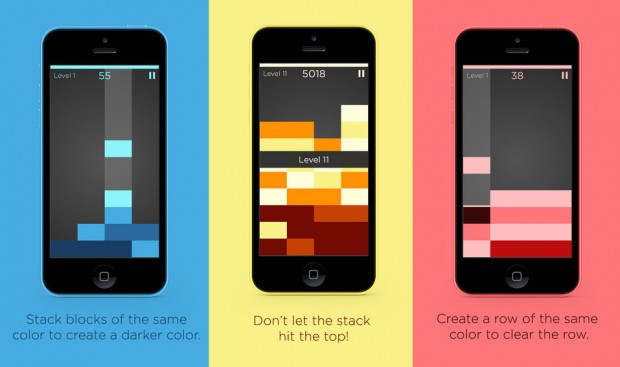 For the competitive players out there, Shades comes with full Game Center support for leader boards. However, there are no achievements. It also features the ability to share your score to social media for those that like to brag incessantly.

So what’s next for Shades? The developers just released some updates that will let you play with 3, 4 or 5 columns of blocks; which increases the difficulty and adds a new dimension to the game. I found the game to be a worthy twist on the Tetris genre; relaxing to play and engaging, with a compelling soundtrack and effects. The free version is definitely worthy of a try, and the paid version has earned a place on my home screen.