I feel like as a developer you can go broke attending conferences, buying books, and listening to seminars on how to make the “perfect" game, when, in my eyes, it has always come down to simplicity. The best, most universally loved games on the App Store with rare exception check these three boxes:

Greg Wohlwend and Asher Vollmer’s Threes! ($5.99) does all this and more. Here’s your single-sentence premise: “Slide blocks to combine factors of three." It’s a concept so simple that upon initial inspection you find yourself wondering how such a thing could even be more compelling than learning multiplication tables, but, oh, how wrong you would be. As exhibited by this similarly simple gif, things get tricky quick:

So, as you can see, the basic idea here is you take a “1" block and a “2" block, mash ’em together, and end up with a “3" block. Do that to create another “6" block, mash those two “6" blocks together and end up with a “12" block. Repeat. The clever part here is that when you swipe, you’re not just moving one block at a time, instead you’re moving all the blocks together. Blocks slide if they can, combine if they can, or just stay stuck where they are if there’s four blocks in a row that can’t move over. Much like the turn-based roguelike Hoplite, these incredibly simple mechanics combine into something truly wonderful and predictable, if only you possess the mental fortitude to predict it.

Games of Threes! quickly escalate to an epic dance of block management, as much like the classic puzzlers we grew up on, you’re given a hint of what’s coming next in the form of a red “2" block, a blue “1" block, or a white numbered block. When you slide the blocks in a direction, whatever block is next slides in from the opposite direction, leaving you with a shocking amount of things to consider each time you place your thumb on the screen. For each flawless movement, without some intense analysis, there’s also an equal chance that you’ll accidentally make an unintended combination and in turn wind up with a block you can’t immediately using junking up one side of the game board.

It’s all part of the genius that goes into Threes!, and if you watch the above video of me playing the game for the first time during my stream yesterday, you’ll see that big number tunnel vision is a real thing. It’s very easy to get worked up to score huge matches, which in turn result in massive points, and as you desperately try to build another “192" block to mash together with the existing one on your game board, everything can go pear shaped if you don’t maintain razor sharp focus on what each movement is going to do, managing all blocks at once instead of focusing on the two you’re trying to match.

Once you finally run out of moves, your score is tallied up based on the values of the existing blocks on the board. (For more info on the scoring, check out this post in our forums). Gameplay doesn’t have to stop there though, as Threes! seems to juice absolutely every worthwhile feature out of Game Center, as you can review all your scores and in-game statistics, then use these to send Game Center challenges to friends. 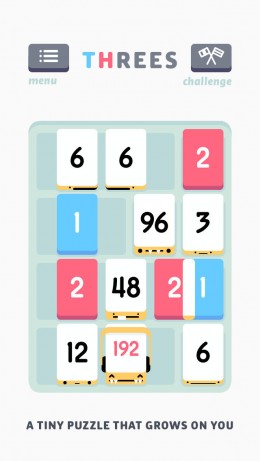 We’ve got the first two boxes checked in simple premise and universally approachable, and Threes! doesn’t at all slouch on the third. The game plays with a level of finesse that you typically don’t see outside of software developed in-house by Apple. Sliding blocks is as fluid as navigating your home screen in iOS 7. The calm and catchy soundtrack by Jimmy Hinson fits the game perfectly. Each block has its own subtle personality, conveyed through tiny faces at their base as well as the voice each block has. In other words, definitely play this game with the sound on if you can.

The menus are navigated the same way as playing the game itself, with simple swipes and without any kind of harsh “Game Over" screen, Threes! seemingly invites you to play it for eternity. Following the stream last night, I stayed up playing it until around 3:00 AM, in a marathon play session that I haven’t felt compelled to do in what feels like far too long.