Crossy Road (Free) has inspired a lot of games recently, which is natural because it’s been a huge success. It’s made Hipster Whale millions of dollars on a game made in three months and without aggressive monetization. There are countless developers in similar situations that would kill for a tenth of its success. There are many straight-up clones, we’re now starting to see games that try to iterate on it and make their own unique experiences. The Quest Keeper (Free) has an obvious inspiration, but it adds in RPG tropes, its own movement rules, and plenty of cool new things that make it its own fun game. 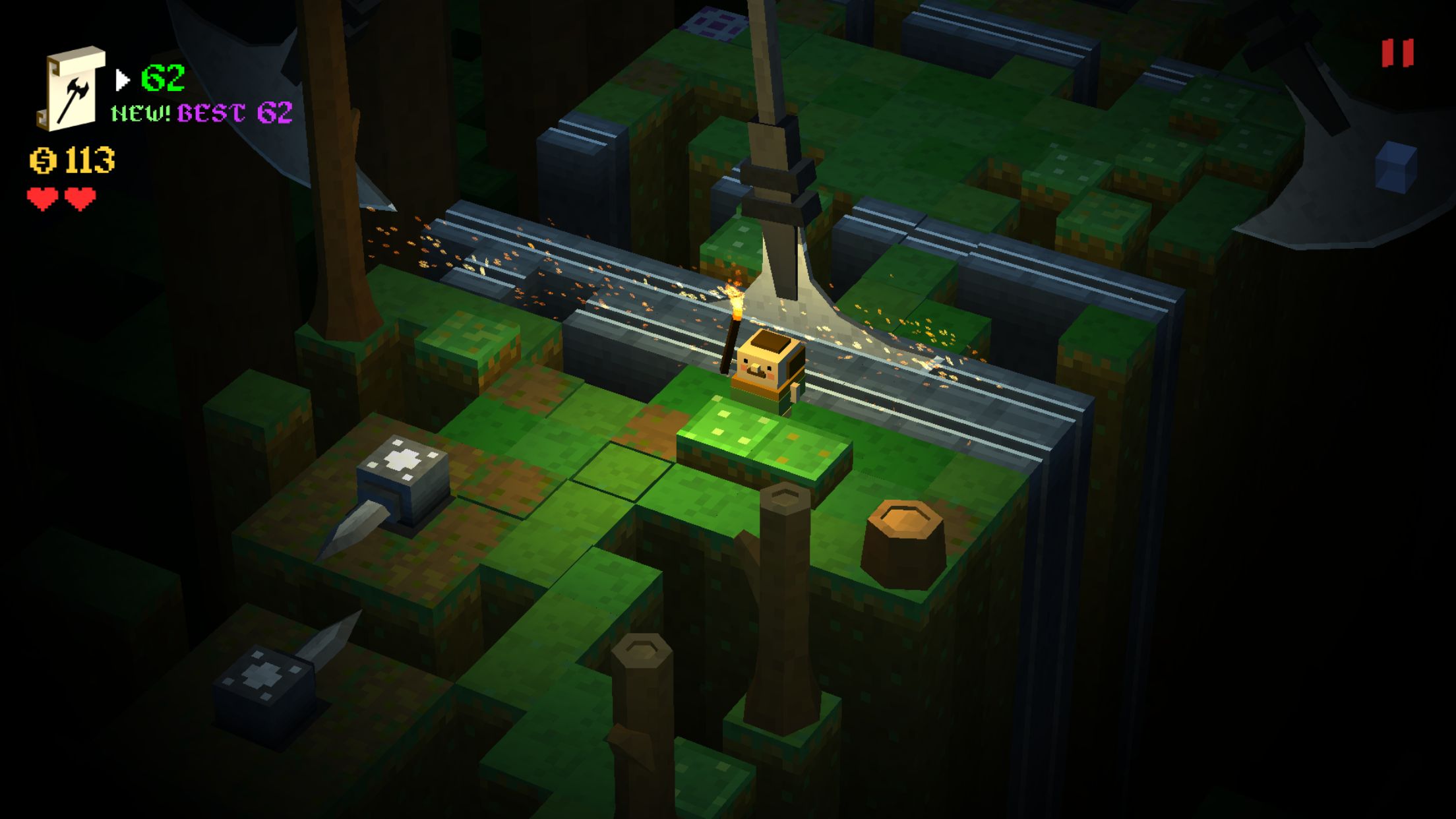 The first big difference is that instead of going one step at a time, you walk without stopping, and swipe to change directions. Off the bat, this has a different feel to it. You have treasure chests that you can collect in the game’s endless mode, which contain ever-greater amounts of coins the longer you play. Yet, getting that far will require that you navigate loads of pits, spikes, rivers, and more. Don’t worry, there are no drop bears and no speeding police cars here. There are also revive points you can unlock, but these cost more and more money. And because you’re trying to make a profit off of the coins you collect, you won’t want to keep buying them unless necessary!

The second is that the game isn’t just about high scores. You can also play quests with the goal being to get to the end of the level. Each one of these levels is randomly-generated, but they always have a particular theme, a fixed length, and an artifact at the end. There’s one level where you have to make it to a distance of 300 m, while spiders chase you and spiderwebs slow you down. Completing a quest earns you an artifact. These artifacts give you an extra half-heart, so you want to collect these to stay alive. These levels don’t give you money like the endless level does, and they have an entry fee, so you’ll need to play the endless level to get more money. 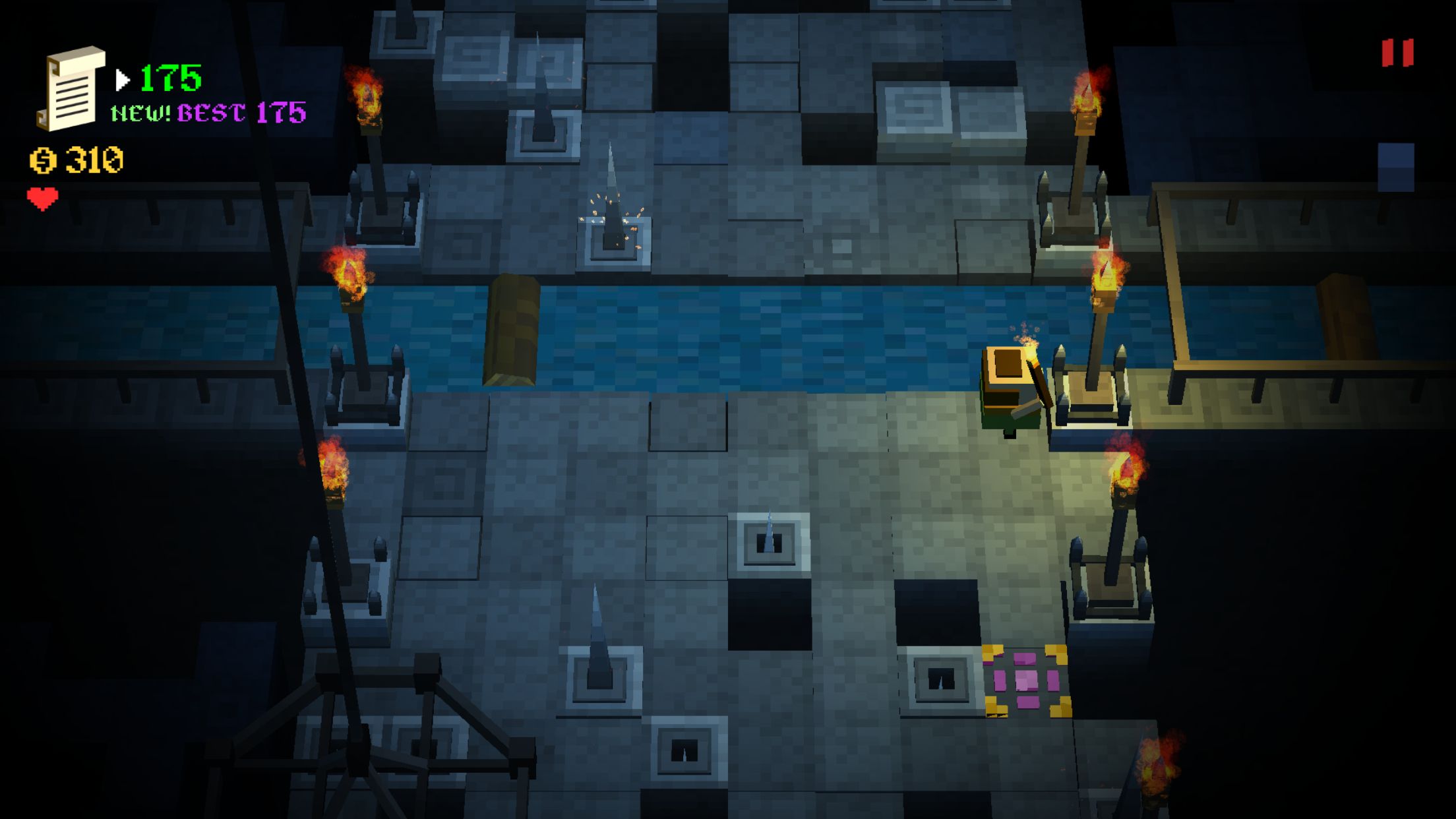 But that money isn’t just for entry fees, it also allows you to buy plenty of helpful items. Some are useful in general, as they increase your margin for error. Others have more specialized uses for specific quests, like the torch that keeps spiders away. These items often mean the difference between winning and losing a quest, or getting loads of money in an endless level.

There’s always something to do in The Quest Keeper. The endless levels are fun because it’s tough to do well in them, but they’re always rewarding to play. And with the 500 m bonus, doing well gives you some extra goodies, either some extra coins or the occasional item or quest unlock. Doing well feels satisfying just because the threat of death is ever-persistent, you’re rarely ever safe from a ill-placed gap or spike trap. Every high score feels like you accomplished something. And because there’s the fixed quests to do, you can find something new to do. 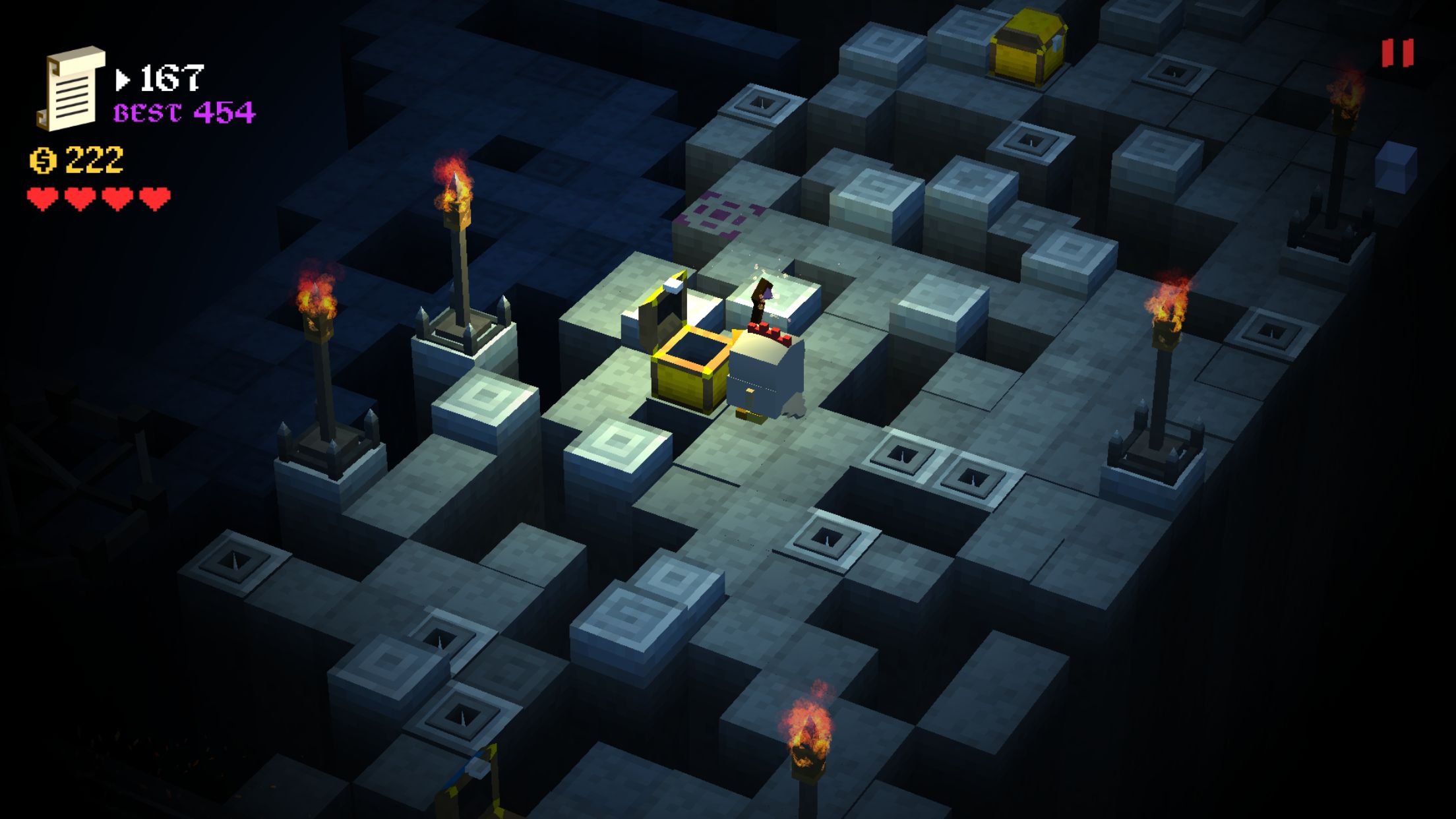 The auto-walking makes the game feel different enough from Crossy Road, while still managing to feel inspired by it. It does so much different to feel like a true iteration on a familiar concept, which has a reason to coexist with its progenitor. If you want a game where you just are going after high scores with a light progression system, you play Crossy Road. If you care more about having goals to progress toward, The Quest Keeper is more for you. This is still a great casual game despite the more complex structure. It has landscape and portrait support, and is controllable just through swipes and taps.

The Quest Keeper is free-to-play, with a $1.99 ad removal IAP, the ability to get 50 coins for watching a video ad, and a $0.99 IAP to buy 500 coins. I definitely bought the ad removal IAP right away, and bought 500 coins to buy an item I wanted ASAP. Yet, the game awards coins frequently enough that you don’t need to feel like you have to spend money. You’ll collect substantial amounts coins on endless runs, and every 500 meters will net you a special prize of at least 50 coins. Every item has a reasonable-enough price that you can buy all of them through regular play. This is great, because some items are a virtual prerequisite for winning at missions. An oncoming wave of spiders? Not so much a problem with a torch that keeps them away! 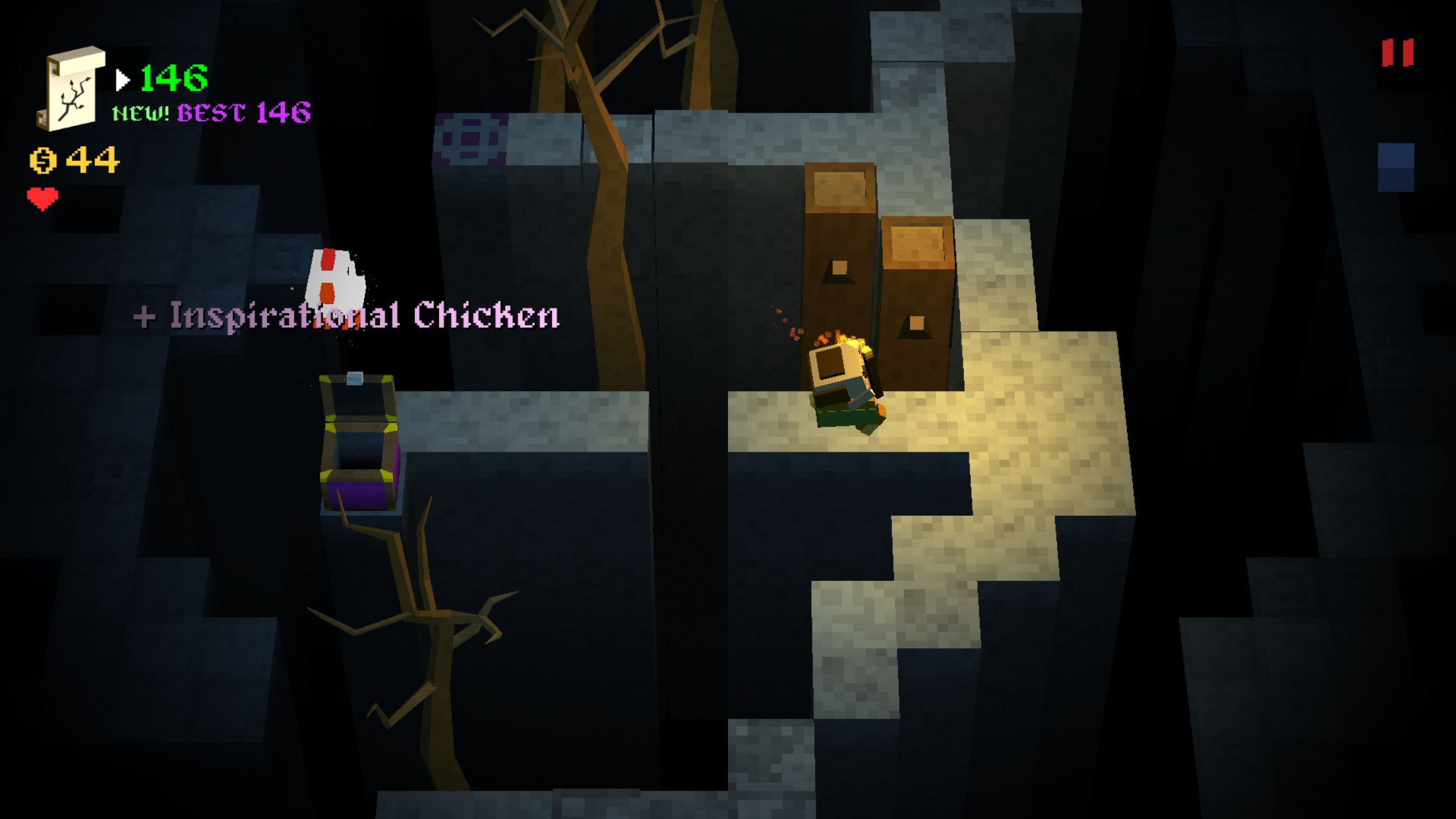 There is one item that helps out an absurd amount, and that’s the boots that allow you to jump over a gap. These make so many hazards trivially easy, help you get higher scores, and complete missions. They cost 1000 coins, and I wanted them now, so I decided to shell out for the extra 500 coins I needed to get them. They change the dynamic of the game so much by making it possible to bypass otherwise difficult sections. Advancing through the game happens so much quicker when you have these, that I think they’re a necessity. Save up or shell out to buy them.

There’s also the boots that enable tile-by-tile walking, but I don’t recommend using them. They lack the ability to just tap to take a step forward like what Crossy Road does. That little feature added a lot to the playability of that game, and without that in The Quest Keeper, single steps aren’t as useful or convenient to use. The other reason is that they’re anathema to how you need to play the game. The auto-walking allows you to navigate past hazards at a speedy pace; when you’re going one step at a time, you’ll likely be taking more damage from dangerous objects. Speed does matter.

The isometric view of The Quest Keeper winds up being a big problem. Because this game is tile-centric, seeing things persistently askew means that it can be tough to line up where you need to go. This is especially the case when you have to cross the logs to make it to the other side of a river. It’s not easy to time getting on the board and getting off. The game does provide a toggle to go to a straight-angle, top-down view, but it feels like you’re taking something away from the game by doing so. You’re removing some of the style in exchange for functionality, when the ideal situation would be to not have to choose. The straight-on angle isn’t perfect, either: sometimes ceiling decorations will block your view. It feels like something added at the last minute because the isometric view has the problems it does.

So The Quest Keeper falls just short of the heights that Crossy Road reaches, but it’s a perfectly valuable game in its own right. It’s a ton of fun, it kept me coming back to it again and again to try and get both high scores and to complete quests, and I got to outrun a bunch of spiders. Check this one out.