In case your nostalgia for the 1990’s, video games, and 1990’s video games hasn’t been sufficiently commodified, peripheral manufacturer Hyperkin has today’s Internet curio: the so-called Smart Boy, an add-on that turns your iPhone 6 into, well, a Nintendo Game Boy.

The Smart Boy is still in the concept and design phase of production, but Hyperkin’s goal is to create a peripheral that plays Game Boy and Game Boy Color games and pipes them through your iPhone 6 screen. As you can see in the concept art below, the Smart Boy is essentially a casing with an eight-way D-pad, two face buttons, and start and select buttons. 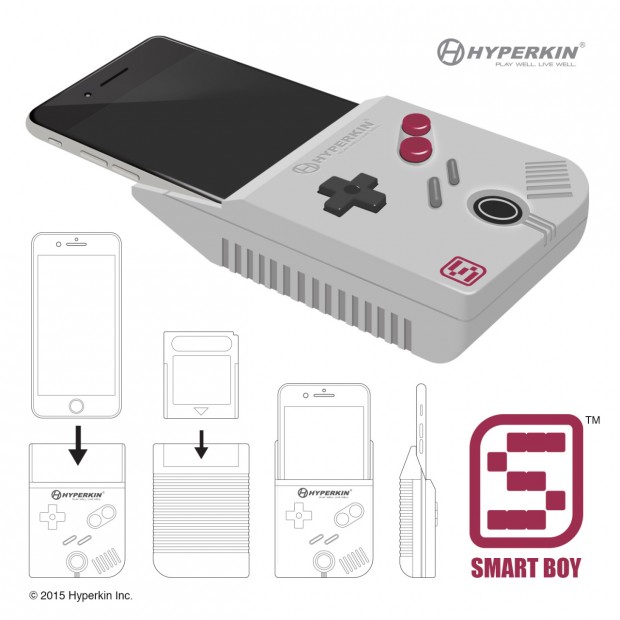 From there, you can (hypothetically) slide an iPhone 6 in the front and a Game Boy cartridge in the back. According to the Los Angeles-based Hyperkin, the Smart Boy will also house its own battery, which will (hopefully) last up to five hours.

In a press release, designer Chris Gallizzi explained that his company “wanted to create a retro device that can be easily adapted into any modern gamer’s arsenal of devices." The idea was originally floated as an April Fool’s Prank until popular reaction spurred Hyperkin into serious development.

Right now, Hyperkin’s plan is to release the Smart Boy in classic grey first and release more colors, and support more types of iPhones, later. Hyperkin is also quick to point out that the Smart Boy’s features and hardware may change by the time it’s actually produced.

The rub, of course, is that Hyperkin is caught between a persnickety Scylla and Charybdis. On the one hand, current plans for the Smart Boy include an app which would need to be approved by Apple. (However, Hyperkin could follow ION Audio’s lead: the iCade uses natively supported Bluetooth functionality instead of a separate app.)

On the other, Nintendo might decide to throw its weight around: the company recently announced a partnership with DeNa to develop iOS games and filed its own patent for a Game Boy emulator app for mobile devices late last year.

Novelty and nostalgia aside, there’s also the practical matter of who might need a Smart Boy: it’s not actually an MFi controller, changes in iPhone size and shape could be a problem, and there are already plenty of ways (legal and otherwise) to play Game Boy titles on more modern hardware, including Nintendo’s own Virtual Console and eShop.

But, y’know, still: it’s a neat little gadget, if only for the fact that it uses honest-to-goodness Game Boy cartridges.