And just like that, the trickle became a flood and all 31 cards from Hearthstone’s (Free) upcoming adventure Blackrock Mountain have been revealed. Blizzard revealed the last 14 cards today on its Twitch stream, and there are definitely some gems.

Let’s briefly go over some of the more interesting ones:

Chromaggus, a neutral Legendary Dragon, stays noticeably below Big Game Hunter (BGH) range and has a really good body. More importantly, if played in later turns when you know more or less your next few draws, it has the possibility to breed all kinds of trouble and will definitely be accused of being OP. I don’t think it is because of the RNG nature of the card draw, but the fact that’s it’s not BGH prey means he might stay on the board long enough to create all kinds of problems and will also help you if you are running out of cards. 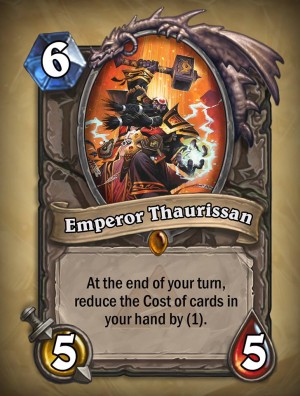 Emperor Thaurissan, a neutral Legendary, has the Hearthstone world buzzing with anticipation. Staying below BGH range just as Chromaggus, this guy will probably stay on the board long enough to bring the cost of all your cards to absurdly low levels. Just imagine all the free Spare Parts you can have in just one turn. This one can make mid-range and control decks more viable than they currently are.

Majordomo Executus was the last legendary revealed today and has the most entertaining Deathrattle, at least for me. If he dies, you can replace your hero with Ragnaros, which means your hero only has 8 health, but his hero power is Deal 8 damage to a random enemy. So, if you are already low and don’t care about going down to 8 health, this will be a fun card to play, and, if the RNG gods are on your side, you might get rid of some big guys or even do some serious face damage.

Another card that’s gotten a lot of attention after the reveal is Gang Up, a Rogue common. Everyone’s been dreaming of multiple legendaries, yours or the opponent’s, flooding the board. If you get some strong early draws to get some good targets, this card might make your deck quite loaded with strong cards. However, the copies might go towards the bottom of your deck and might not make a big difference overall. They might even screw up your strategy because you might change your strategy hoping to draw cards that might not show up until it’s too late. Still, quite a fun card that will definitely finish some matches all by itself.

Revenge, a Warrior rare, is an obvious attempt to help Warriors handle aggro decks. If you’ve been battered and can’t establish any sort of control, this card can help get rid of cheap minions and clear the board. However, the fact that it hits your minions too makes it much less playable. Still, it might be worth having a copy in your deck.

Quick Shot, a Hunter common, unsurprisingly got people complaining not because the card itself is something special, which it isn’t, but rather because people see it as more support of the Aggro Hunter decks that everyone’s been complaining about since GVG came out.

The rest of the cards are Paladin’s Dragon Consort and Solemn Vigil, Shaman’s Fireguard Destroyer, Druid’s Druid of the Flame and Volcanic Lumberer, Priest’s Twilight Whelp and Resurrect, and Warlock’s Demonwrath. Blizzard has also said that there won’t be any card or balance changes in the upcoming patch.

The first wing of Blackguard Mountain Adventure will unlock on April 2nd in the Americas and April 3rd in Europe, Asia, and China, and you can preorder the whole adventure for $24.99 to get the exclusive card back. If you’d rather spend in-game gold for the adventure, you can still get the whole thing when it’s released, but no card back for you.