After a full trilogy of games in the span of just seven months, the Five Nights At Freddy’s ($2.99) series could be forgiven for taking some time off after this one. Whether or not Five Nights At Freddy’s 3 ($2.99) is where it ends, you have to give this series and its developer a lot of credit. In a short span of time, it became a minor cultural phenomenon, recorded huge sales on every platform it released on, and earned success and recognition for an independent developer who has taken plenty of swings at the whole “making a game" thing before finally knocking one out of the park. Fans all around the world compare notes about the story, trying to piece together mysteries that may not have ever been intended to be solved. The titular Freddy Fazbear himself is likely more recognizable than the character he parodies among most people under a certain age. In a lot of ways, we’ve come a long way from the humble point and click simplicity of the first game.

In some ways, however, we haven’t moved quite so far. This third game in the series shows serious signs of fatigue for the concept, not quite coming unglued but not far from it. It probably answers too many questions, and the new gameplay ideas just don’t add up the way they need to. There are things that it does better than the prior games, but if this turns out to be the last game in the series for the time being, that’s probably a good thing. You’re once again set in the role of a night security guard, though the back story is a bit different this time. It’s 30 years after the events of the first game, and the restaurants have long since been shut down due to all of the strange happenings that occurred. It seems that time heals all wounds, because Freddy Fazbear has become something of a hot nostalgia item, with collectors trying to dig up any and all items related to the characters. To capitalize on this, the site of one of the old restaurants has been refurbished into a horror attraction called Fazbear’s Fright. 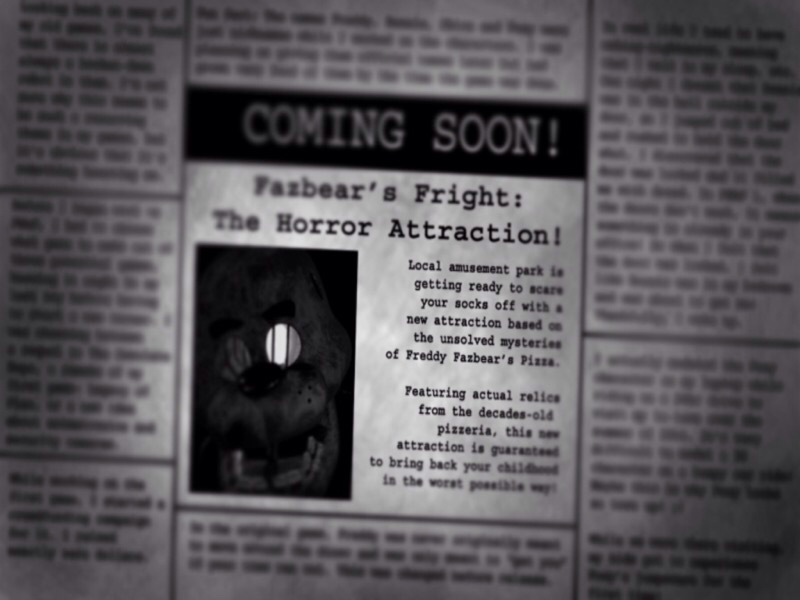 Well, this all seems like a good idea, doesn’t it? Initially, it’s not so bad. They haven’t been able to recover any of the animatronic mascots, so there’s nothing to worry about there. Or there wouldn’t be, if they hadn’t just made the discovery of a lifetime: one of the special suits that doubled as a costume and an animatronic. Enter Springtrap, the most intelligent and ghastly antagonist in the series so far, and the only real monster you’ll have to contend with in Five Nights At Freddy’s 3. Going from eleven antagonists in the second game to just a single one here is a bold move, but I think it’s probably a good one. Upping the number would have been ridiculous, and going with the same number would have been too much of a rehash. No, it’s just you and Springtrap this time around, and you’d think that would make things easier, but it doesn’t quite work out that way.

He’s fast, he’s deadly, and if you so much as close your eyes for a second, he’ll finish you off. The former restaurant has extensive duct work, and Springtrap knows how to make the most of it. Your job is as it always is. You need to survive a working week at your job, a task that gets more difficult with each passing night. Unfortunately, even with all of those ducts, the ventilation system in the place is prone to failure. When it stops working, you’ll start hallucinating all kinds of jumpscary things, and while they can’t kill you, Springtrap isn’t above taking advantage of the situation. You don’t have to worry about the lights or conserving power this time around, luckily. Instead, you need to make sure your three lifelines continue to function. I’ve already mentioned the ventilation system and why keeping it running is important. There are also audio devices that you can activate in certain rooms that will distract Springtrap and lure him away from the office that you can’t move from. They’re vital to your survival after the first couple of nights. 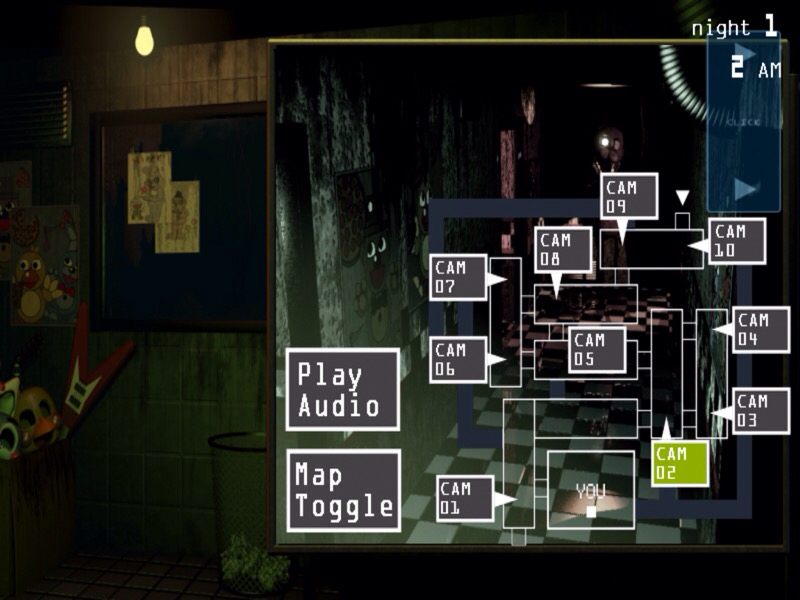 Rounding out your tools is the old reliable camera system, allowing you to keep an eye on Springtrap’s movements and open or close vents to route him. He’s not afraid of you nor is he oblivious to your monitoring. When you catch him on camera he’ll often be staring right at it. There’s no question of intentions this time around, no innocent back story to cover up his murderous desires. He wants you dead, and he’ll do that by any means possible. When all three systems are working, you can usually stave him off. That’s not much fun, though, so sometimes one or more of your tools will simply fail you. If that happens, you’ll need to manually reset them, a process that takes several agonizing seconds. You can reset them individually or all at once, with the latter option shaving a few seconds off of the total time but leaving you vulnerable for more than enough time for Springtrap to make a run for you from the other side of the building.

Once again, it’s a game of spinning plates and avoiding the temptation of overusing the means you have at your disposal for fear of them failing in a critical moment. The unpredictability of Springtrap makes this a bit more fun than the previous games, which tended to become almost mechanical at a certain point. There’s no one thing you can do to stave Springtrap off reliably, making Five Nights At Freddy’s 3 an enjoyable game of cat and trapped mouse. 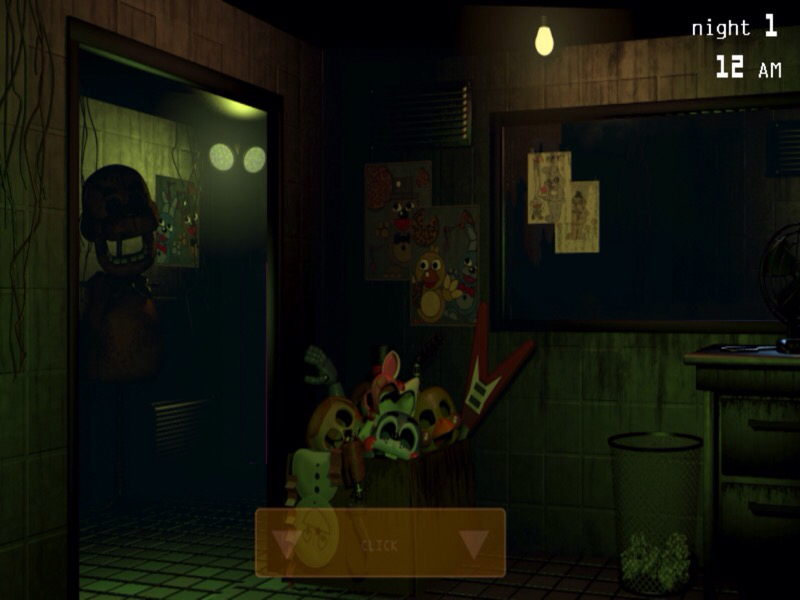 Faux-retro mini-games make a return as well, this time as a sort of reward between nights rather than a random consolation prize for dying. Much of the story can be gleaned from these games, with the ever-present man on the telephone filling in the rest. There are actually two different phone guys this time around, but the one who talks directly to you checks out of the story early on in favor of a recording of the original guy supposedly conducting training for new employees. It makes the game feel more lonely, somehow, that the only voice you hear after the second night is from 30 years in the past. It’s also a bit eerie given that we know his fate from the first game.

I would say most of the important questions in the series get wrapped up here, however vaguely. New for the series, the game has two different endings. To see the good ending, you need to successfully finish all of the mini-games, but the reward for doing so is decent. The restless, violent spirits seem to mostly be set to rest in that ending, though in true horror movie fashion, an escape hatch is left should the developer want to return to the story at some point. I think trying to move on from here will veer into the same dreadful territory as good horror movies with too many sequels, though, so I kind of hope this is where it finishes. 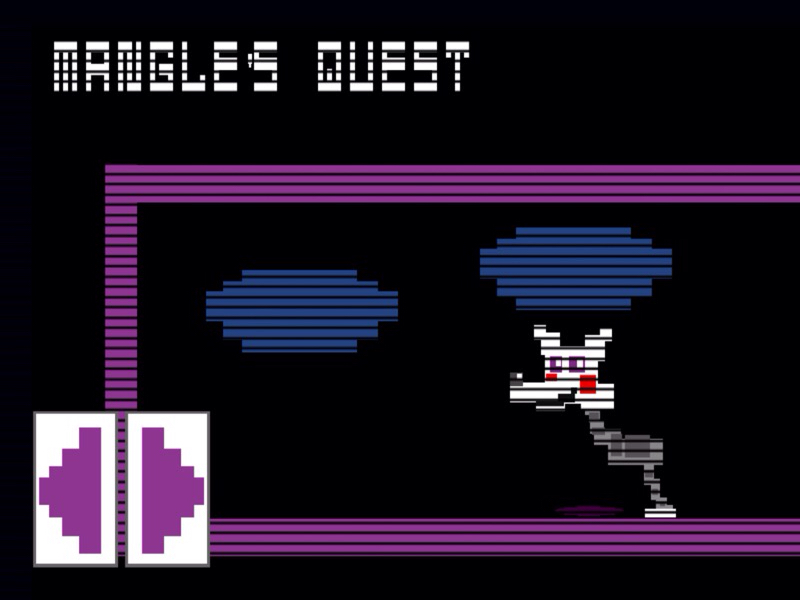 Strangely enough, I ended up enjoying this one a little more than the previous games, even while recognizing that the trick is starting to get old. I think it was more satisfying from a gameplay standpoint, and I appreciated the way the minigames helped to break up the usual mechanics. The game also benefits greatly from focusing on one antagonist, making him as scary and threatening as possible. There’s no revolution here, but if you were kind of like me and felt the series was just a little short in the gameplay department, you might like this one slightly better. There’s a certain refinement to its design that is impressive given how rapidly it followed from the earlier games.