One of my absolute all-time favorite NES games was DuckTales, and adventure platformer based around the Disney cartoon series of the same name. It starred the wealthy Scrooge McDuck and his three nephews Huey, Dewey and Louie, as well as a large supporting cast of both friends and enemies. It’s a total classic! In 2013, Disney, Capcom and WayForward collaborated on a modern remake of the game for consoles and PC titled DuckTales: Remastered. Now, according to a photo tease from the Disney Interactive Twitter account, it looks like DuckTales: Remastered is heading to an iPhone near you. 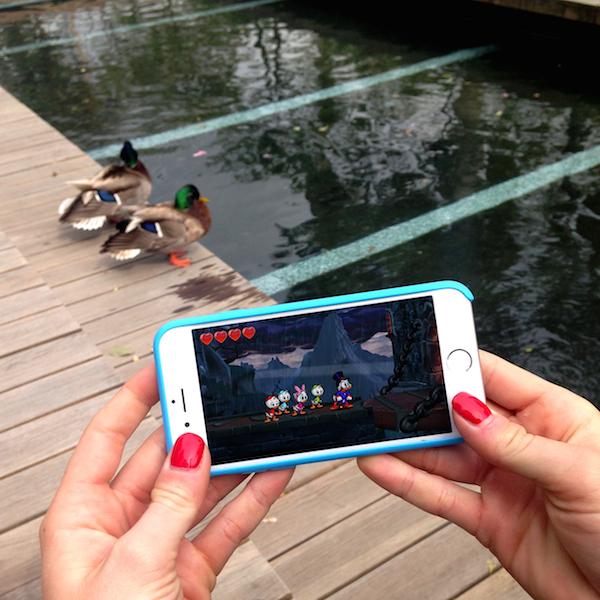 They’re playing DuckTales, in front of actual ducks, on an iPhone! Life is crazy. What’s also crazy is that I was just thinking about DuckTales: Remastered and how I was mad it never came to the Nintendo 3DS. Well, if it ends up coming to the iPhone, even better! DuckTales: Remastered received a mostly positive reception when it originally released. Presentation-wise, it was on par with the old cartoons, featuring gorgeous visuals and animation as well as full voice-acting from the show’s original cast. Gameplay-wise it was faithful to the NES original and decidedly old-school, which you either loved or hated. Personally, I’ll be absolutely through the roof if DuckTales: Remastered heads to the iPhone, which it looks like it is, so as soon as we get any more information on it we’ll be sure to let you know.