One man, 1000+ design sketches and 1 years round the clock sweat and tears, has produced an intriguing puzzle platformer that’s blown me away in terms of ingenuity and uniqueness. You can see why Apple chose to feature the game; the magic comes from the lego style constructions with blocks, characters and other objects. Each level is short and smart, providing just the objects you need to make it to the exit. Blocks and characters can be stuck together or pulled apart, and everything in game can be stacked on top of each other, or stuck to the side of other objects to increase their abilities and usefulness. It makes for varied solutions from fewer objects, requiring true problem solving skills.

So what’s the story? Odd Bot Out (Free) features a small wobbly robot protagonist called Odd, with a big personality, who has been banished down the garbage shoot and must now find his way back. This adventure involves traversing through 100 rooms of varying difficulty with uniquely created challenges to solve. These obstacles ahead of our robot friend include ditches that must be built over, platforms that must be reached as well as machines and characters that must be astutely manipulated. 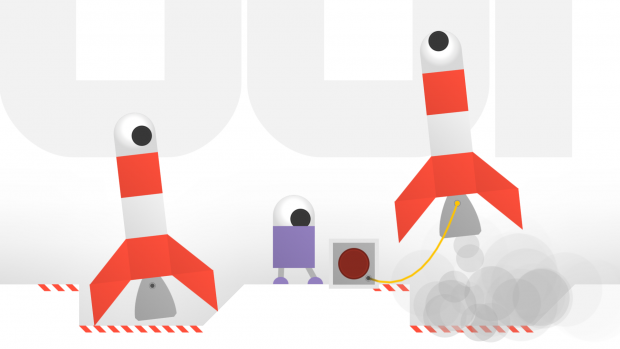 Exploring all the toys and erector sets within game is very satisfying. Along the way you’ll use fans, other robots, electric ramps, switches and even rocket ships which help to mix up the game play and keep each level newfangled. The challenge lies in solving how to combine and move the objects and Odd in order to maneuver him out the exit. Some of the highlights were controlling the caterpillar, walking over the heads of many other discarded robots, who seem happy to help you along, and some amazing levels with rows of fans that shoot you through the room. I’ve been told level 89 is one of the best where you have to scale a vertical wall by simultaneously building and climbing a staircase and also don’t give up on Level 45. Not all the walls are what they appear.

One feature I found nifty is the control cubes. From these cubes you drag power cords to different machines to activate levers, fans and even rockets. Changing plug points often changes direction or function of the machine which I haven’t seen in any other puzzle games.

Odd Bot Out reminds me of the award winning puzzler World Of Goo crossed with the flat simplicity of the pattern drawing game Blek. The level design is innovative; this isn’t a simple drag and drop, you need to think out of the box, reuse objects when needed and make sure to bring objects along with you in just the right way and order.

I played through the first 50 levels in about 2 hours, and for me the coolest part of the game was how it’s structured. The level progression intelligently teaches you tricks and methods along the way as the puzzles become more complex. Many of the levels employ similar solutions used in intellectual and team building tests, the kind where you have to get multiple animals across a river with only 1 boat, or scale heights without enough blocks to manufacture steps. It is by no means a simple game, but the level progression tends to mix in an easy challenge after a complex psycological one to give you some breathing space.

How could Odd Bot Out be improved? What you can see and manipulate is centered on the cute purple robot which means it’s hard to get a overview of what’s coming up, or scroll back to grab the objects you need. The game does have the ability to be played in horizontal or vertical orientations. I found spinning the iPad or iPhone around often allows you to grab objects that were previously off screen. 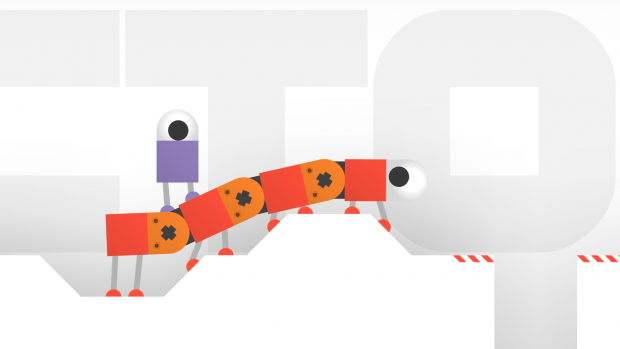 My only other concerns were the lack of tutorials or instructions when you start up the game, it took me a while to figure out how to move Odd, and to realize he could only walk up single steps but not double steps. The developer Martin Magni said he was growing increasingly tired of games force-feeding him long and tedious tutorials. So a lot of work went into making the touch controls intuitive enough that they require little instruction. One other issue was the lack of setting controls; any music or podcasts you have playing are muted as soon as the game loads.

For Martin Magni to have built the whole game on his own in year is a herculean achievement. He’s done the lot, design sketches, writing the game engine from scratch, implementing a custom physics engine, drawing every piece of artwork, composing all the music, and taking very little time off. Having such a singular clear focus across design and development does have it benefits, everything feels measured, crafted and considered and you can see that every aspect of the game flows from Martin’s passions in development and encompassing vision for the game. He has said that some players are asking for even more levels, or a level editor, but that’s because they haven’t seen his next secret project yet!

I’ve been really impressed with Odd Bot Out, even the lack of tutorials provided a challenge which was a puzzle in itself. The game is fresh, challenging, and the wobbly walk of our robotic hero is definitely worth checking out if you like puzzle games. I’m looking forward to spending more time with Odd and helping him reach the surface.