It’s been a few years since we’ve seen a new iOS release from Mikengreg, the developers behind the hit Solipskier ($0.99). Mike Boxleiter and Greg Wohlwend gave the label a bit of a rest while they worked on other things after Gasketball (Free) didn’t catch on quite the way they’d hoped. Notably, Wolhwend ended up teaming up with Asher Vollmer to create Puzzlejuice ($1.99) and Threes! ($5.99), both excellent puzzle games with strong visual designs. Well, the band is back together again, and perhaps somewhat informed by their experiences had apart. TouchTone ($2.99) is a striking puzzle game, the sort of thing we’ve come to expect from Wohlwend’s recent projects, but it’s also a compelling politically-charged statement on modern America, something both Boxleiter and Wohlwend have strong ideas about. While these two sides of the game don’t blend together as well as I might like them to, they’re individually strong enough that if you’re only coming to the game for one, you’ll likely find the other to be quite enjoyable.

The nature of the game is such that I can’t go into a lot of detail about its strongest point. The narrative is extremely interesting and full of twists, but there’s a greater message being delivered here, and it’s one that I think you’re best left to discover (or not) on your own. The premise is that you, which is to say not an avatar but the actual you, have joined a government program that has you tapping into phone conversations to try to find threats to the public safety. It doesn’t take long before you find a hot trail. From that point, it’s a relentless pursuit of safety at all costs, solving one puzzle after another in hopes of gaining access to vital information that could prevent a terrible outcome. You’re joined by your handler, who chimes in with occasional comments, but other than that, it’s just you and the conversations you monitor. 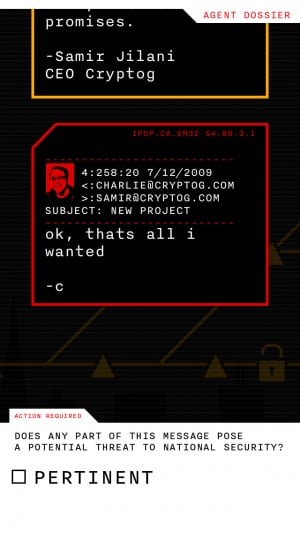 The writing is top-notch, giving you mere fragments of the whole picture with each snippet, causing you to constantly re-adjust your expectations of where it will all lead. Now, whether or not you like the message the game has to offer is going to vary from individual to individual, but I feel that a good story is something most people can get behind. The other part of the game, and where you’ll be spending most of your time, has a more narrow appeal. Its quality within that niche is high, but I’m not going to sugarcoat it, the puzzles aren’t going to please as broad a range of people as the story.

Regular readers of TouchArcade know that I’m a big fan of RPGs. That genre often likes to bring puzzles into the dungeons just to break up the combat sequences, and one of the more popular types of puzzle you’ll come across is the reflection puzzle. In this kind of puzzle, a beam of light is entering the room from one particular direction, and you have to move or rotate mirrors to direct it to a different spot somewhere in the room. I’d imagine plenty of gamers have experience with them, since they appear not only in RPGs, but also in action and adventure games. That’s essentially what the puzzles in TouchTone are based around. They have a few twists and offer a considerably higher difficulty and complexity than the entry-level sequences you may have seen before, but it’s the same idea. A reflective beam enters from one part of the screen, and you need to move pieces around to direct it to another. 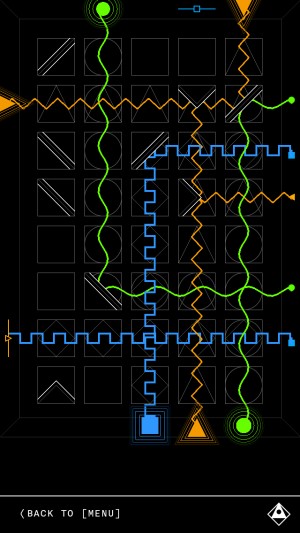 The premise here is, I think, that you’re connecting phone signals. Each stage contains an arrangement of beams of differing colors, an equal or greater number of color-coded nodes you need to connect them to, and some pieces that can change a beam’s direction or color, or even split the beam into two streams. You can shift these pieces around in the style of Threes! by swiping along the rows and columns. Once everything’s hooked up, it’s on to the next stage. If you don’t like this kind of puzzle, there isn’t really anything here that’s liable to change your mind, but if you’re okay with them, you’re going to be in heaven here. Although the difficulty and complexity of the puzzles ramp up pretty quickly, TouchTone keeps asking you to consider familiar situations in new ways all the way through. Just when you think you’ve got a handle on things, the game will present you with a board that initially looks impossible. Finding the exact way that proves it’s not is an incredibly satisfying feeling. No bones about it, though, you aren’t going to be able to fumble your way to a fun time in this game. It’s tough, even if you’re only trying to follow the main path.

The stage select screen is quite visually interesting, as you might expect from a game Greg Wohlwend had a hand in. As you clear each puzzle, new branches open up, some of them locked. To unlock those, you simply have to follow another branch until you find a key. Other branches are optional, but include extra information about the game’s story, much of it vital if you want to understand the whole picture. These optional branches often contain the most difficult puzzles, so don’t feel bad if you have to come back later. I’m pretty sure you’re not really meant to solve them all as you happen upon them, anyway. A bigger problem is if you happen to get stuck on a mandatory stage. There’s no way to skip a problem stage as far as I could find, so if you’re stumped, there’s not much you can do apart from going back and picking at whatever optional stages you haven’t finished and hoping for a bolt of inspiration later. 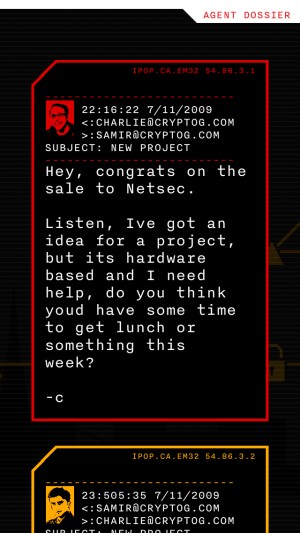 This ends up feeling strongly at odds with the heavy sense of anticipation the story builds inside of you. You’ll get into the story and want nothing more than to read the next fragment, only to run into something you can’t wrap your head around. At that point, you can either keep bashing your head on it until you figure it out, or in frustration, step out of the immersive world the game works so hard to create, perhaps never to return. I’m always conflicted about how to deal with situations like this. One person’s challenge is another person’s warm-up, and I certainly appreciate games that throw heavy punches. That said, I also strongly feel that puzzle games are better off if they allow you to skip the odd stage here and there if you can’t get your head around it for some reason or another. Sometimes you just need to shake your brain around by working on something else. I think that’s what the optional side paths are intended to help with, but due to their relatively high difficulty for the most part, they don’t work well in that regard.

Unfortunately, this is one of the more subjective qualities of any game. If your skill matches the game’s curve well, you’ll have a lot of fun solving the puzzles and piecing the story together little by little. It’ll test your brain, keep you engaged, and when it’s all said and done, I can promise you’ll have a lot to think about. If, on the other hand, you have a lot of trouble with reflection puzzles, you’re going to find TouchTone an extremely frustrating experience. The story will pull you in, compelling you to move forward, only to have you run into a wall that denies you every so often. You’re either going to love this game or you’re going to despise it for not letting you love it.

I have to make a judgment call, though, so I guess I should try to sum my thoughts up. If you’re a puzzle game fan, particularly one who has enjoyed these reflection puzzles in other games, this is a must-have. While I haven’t elaborated much on the story, I can assure you that it’s more for fear of spoiling it than for any lack of quality on its part. The puzzles themselves are devilishly designed and use simple rules to create increasingly complex challenges, introducing new ideas at a steady enough pace to keep things from becoming rote. More casual fans are likely to find a lot of frustration in TouchTone. If you can stick with it and see it through, I promise the juice is worth the squeeze. If you’re prone to moving on to the next game when you hit stubborn walls, I’m afraid you’ve probably got the wrong number here.