Rop ($0.99) has a bit of an odd name. Without the accent over the o, it may seem like “rahp" instead of “rope," which is the theme of this game. It’s a puzzle game where a bunch of ropes are strung together, and your goal is to rearrange the different linked points into a shape matching what is given, all on a hexagonal grid. Yep folks, this is a casual minimalist puzzle game that’s also a real game. 2015, we did it! I can tell you whether you will enjoy Rop or not through the answer to one simple question: do you get satisfaction when you get a massive mess of cords untangled? If so, every time you solve a puzzle here, you will feel pretty good. 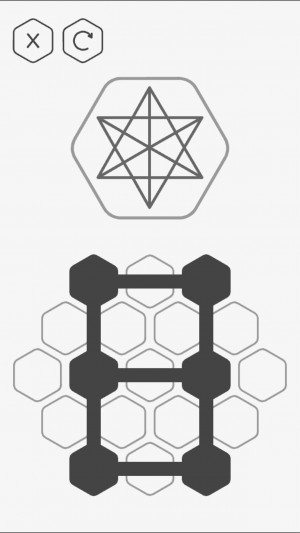 While this game isn’t literally about untying things, it gives off that same sort of satisfaction. Each level has the ropes and nodes arranged in a certain way, that you must then rearrange to match the shape. All the levels take place on the same small hex grid, and later levels start to introduce large numbers of ropes and nodes without making the grid any bigger, so, yeah, good luck with all that once you have 12 nodes, some of which have four or five ropes coming out of them, and you’re trying to rearrange them to match a shape that intersects with itself. Also, shapes have to be connected, and I’ve gotten to a point where a shape will match what I need to make except for two nodes being disconnected. Thankfully, ropes can go over themselves, but you need to keep this in mind as you solve the game’s myriad puzzles.

Rop is definitely approachable, and ramps up its difficulty curve in an excellent way. The early levels are easy and introduce basic concepts to you, before eventually bewildering you, but in a way that feels like, “hey, I understand how this all works." The later puzzles do start to feel a bit crowded because of that small grid, though. You’ll be doing a lot of temporary rearranging.

You can restart a level back to its initial placement of everything, which is welcome when you’ve made a huge mess of things, you’re crying because you don’t know how this is going to be solved, and you just want to start over from the beginning. Sometimes I think I’ll have a solution that’s just right, but it’s easier to start over because there was likely an error early on in my process. You really have to approach this game in a methodical way, analyzing how many ropes are coming out of a node, what it’s connected to, and where it should ideally go. When you figure it out, and sometimes it’s a little bit of luck, where “hey, maybe if I put this here it’ll get me a step closer to the solution," that beats a level for you. But it’s incredibly satisfying when you do pull it off. 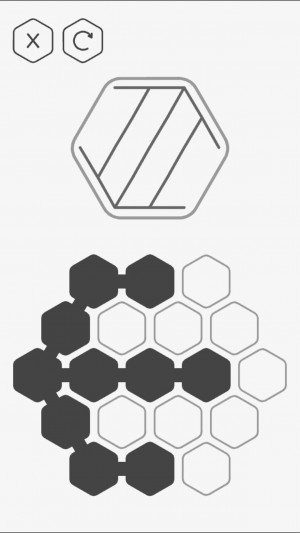 Rop boasts a minimalist monochrome look, and the way that the ropes and nodes interact is quite similar to World of Goo ($4.99) in a way that feels similar, but in a rather different application. When the puzzles start to get more complicated, it can be difficult to keep all the nodes apart from each other because there’s so many of them, and it’s black on black on black. iPhone 6/Plus support would be welcome. Plus, all that black starts to look a bit lighter than actual black, though it does look like a really dark gray. Still, you need to look carefully at what’s going on. The game looks a bit better on iPad because you can tell the tangled ropes apart a bit more easily thanks to the bigger screen, but there’s no iCloud progress synchronization.

Rop pretty much just tracks whether you beat a level, without anything like time being tracked, so you’re pretty much just playing this one for the progression. I suppose time per level would be interesting, but with the limited number of Game Center leaderboards, that could be prohibitive to implement. It would be welcome, because there’s an inherent challenge to the complicated ones, that if you can manage to get everything solved quickly, you deserve some sort of recognition. At worst, you’re paying $0.99 for the game’s 77 puzzles, which do start to present a formidable challenge over time. Oh, and there’s more levels in the works, and some folks have managed to play some of the in-development ones thanks to a bug, so there’s a fantastic bang for your buck.

I was a big fan of Gamebra.in’s Twelve (Free) and Joinz ($1.99), and as this is from the same developer, I’m definitely keeping an eye on what they’re doing, because while they don’t make perhaps the best puzzle games, their approach is interesting and has yet to let me down. Rop is a perfectly cromulent experience, balancing out thoughtful challenge with minimalist design and delivering satisfying solutions.