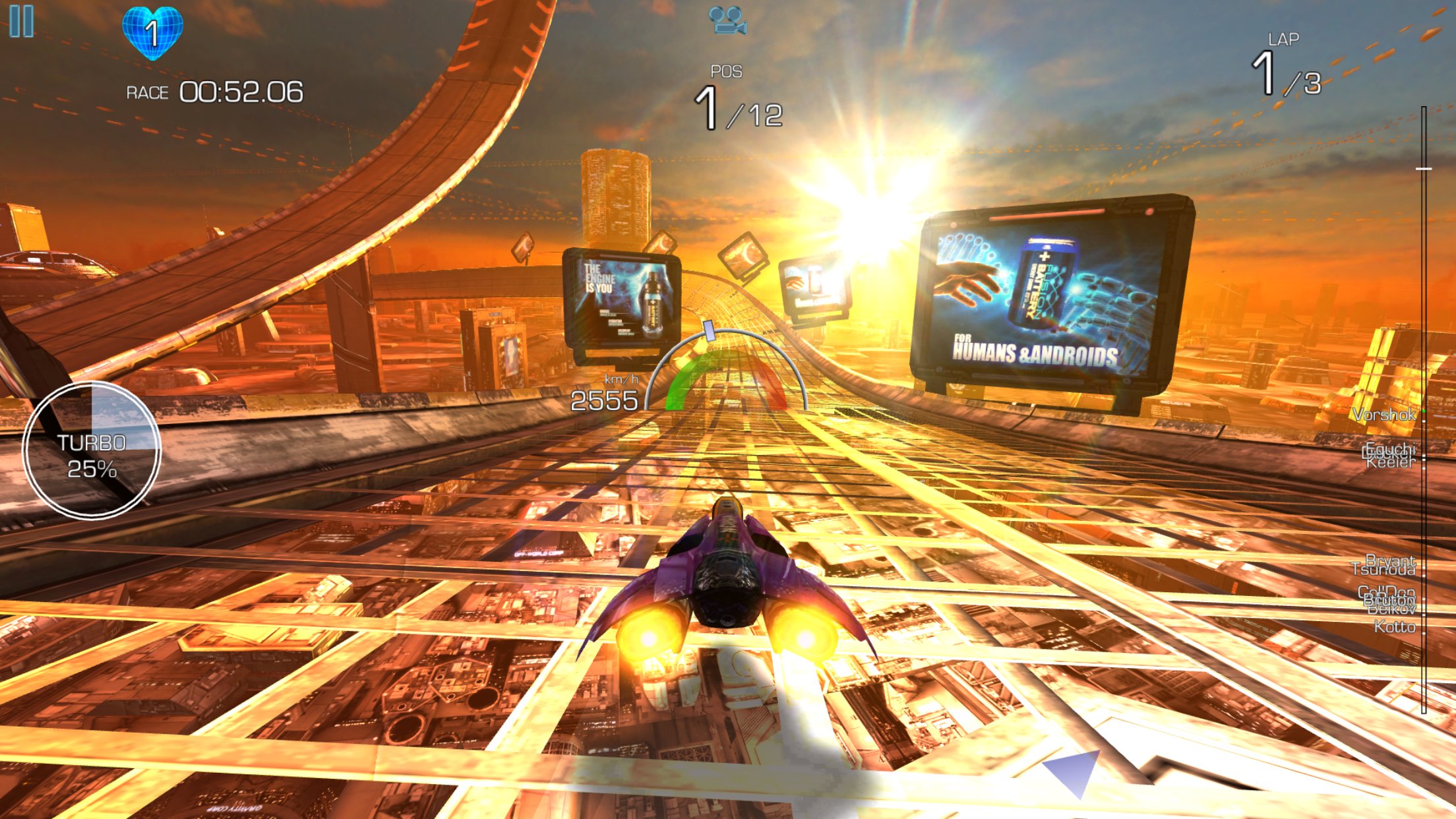 Like most futuristic racing games, you control a hovercraft travelling at reckless speeds along tracks with dips, dives, and loops that defy physics, doing so in time trials, standard races, elimination events, and even the occasional “reach a certain top speed benchmark" challenge. You don’t have weapons per se, but each vehicle has a special ability that charges up over time and can be deployed. AG Drive is never really surprising nor innovative, but that’s not a bad game. The sensation of speed is fantastic and there’s plenty of exciting moments in the racing when you hit a big dip or take a huge jump. Plus, the races are designed to be playable in short bursts, making this great for a mobile device.

The soundtrack is high-intensity electronic music, as you would expect from this sort of game. And it features music and production from the guy who made the Angry Birds (Free) theme, which is the most unexpected thing about this game. It just tries to be a great futuristic racer in the vein of the Wipeout and F-Zero games that came before it, relying on their established conventions, and it does a good job at it. 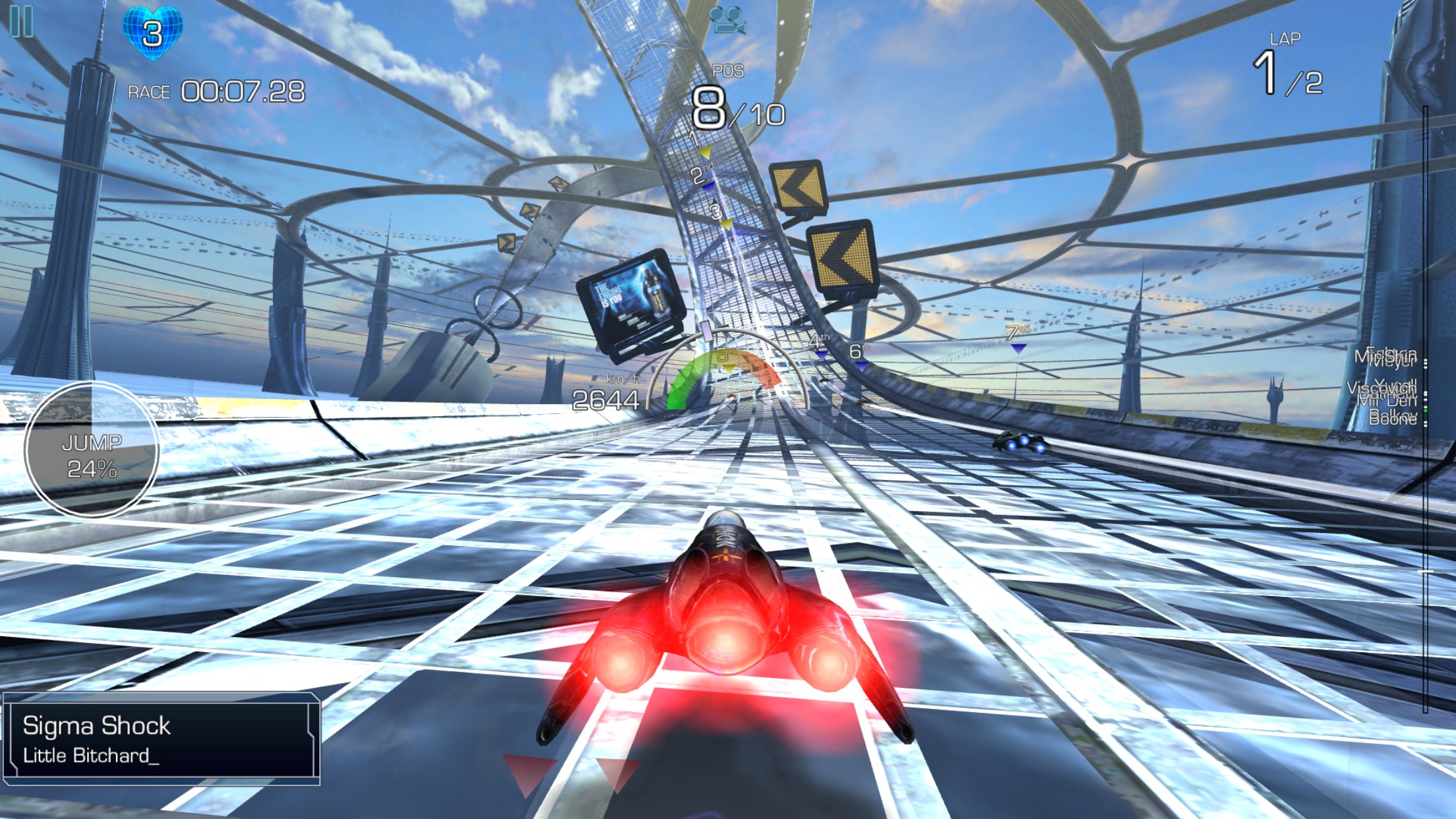 AG Drive is absolutely gorgeous. The game makes full utilization of iOS 8’s Metal graphics, and the detail is impressive. Futuristic cities whoosh by you as you race at ludicrous speeds. There’s a number of fantastic lighting effects, and the game runs at 60 frames per second on the iPhone 6 Plus despite all the high-quality visuals. It’s just readily apparent that a lot of work went into making this game look as good as it possibly could have, it is absurd.

AG Drive uses tilt controls primarily to have you try to commandeer this mayhem, and they’re very good controls, I have little problem with them as they are. The indicator that shows how far you’re tilting to one side or the other is incredibly handy. Tilt controls get a bad rap and it shouldn’t be because of inaccuracy, it should be because they’re kind of nerve-wracking. Like, if you’re on a bus and you hit a bump and suddenly you’ve gone off the track, oh no. They require a kind of focus and attention that can mentally make them a bit less relaxing than a game where you can just tap virtual buttons and play it. Functionally, there’s no problem with the tilt controls here, the problem is with tilting to begin with.

You will learn to love the tilt controls once you play with the touch controls, however. They’re awful, because the buttons used to steer with are very unresponsive outside of the actual button labels on the screen. After a couple of races, I found myself going back to the tilt controls with pleasure! 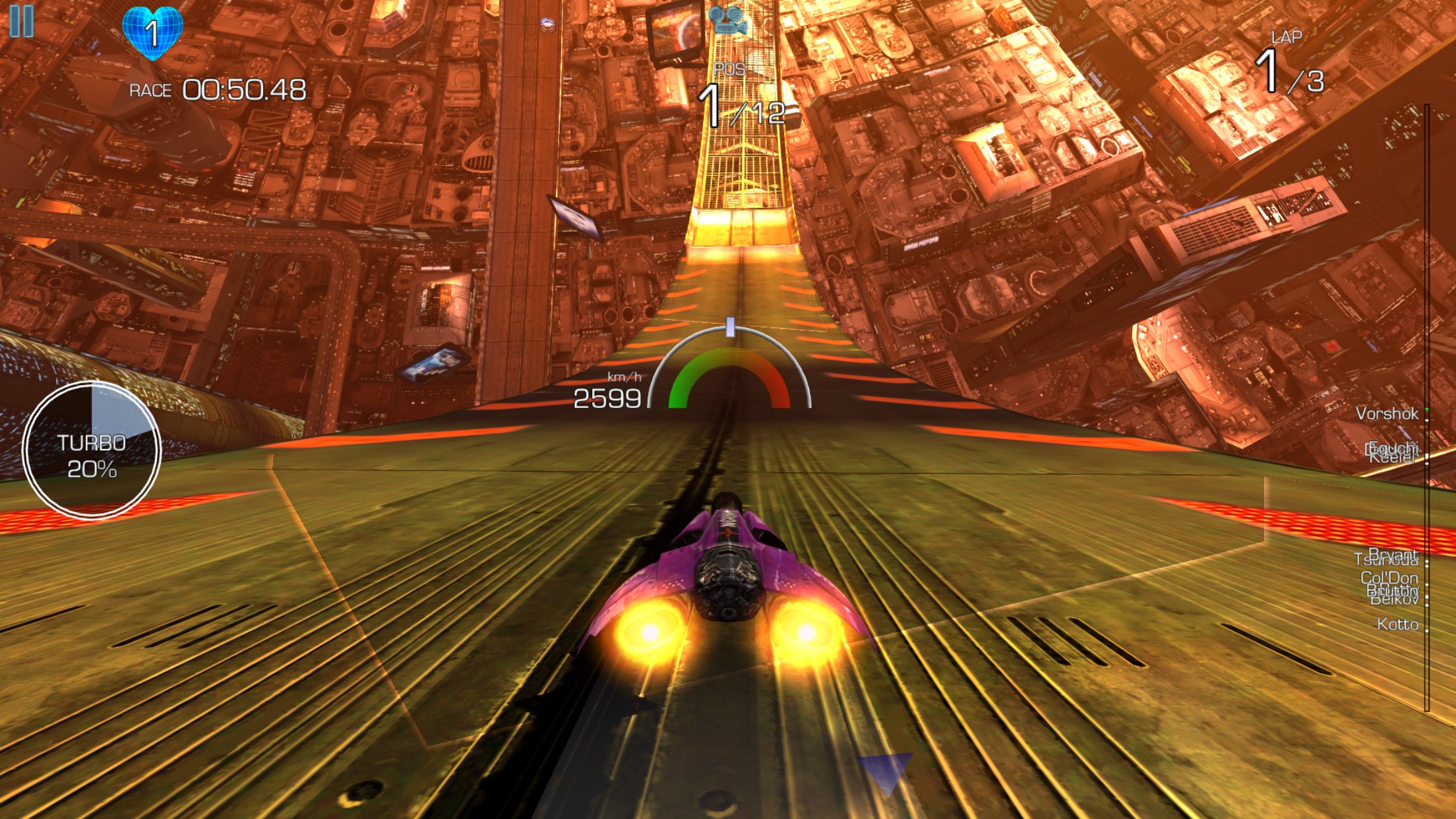 Braking is kind of odd in this game, in that it drains your ship’s health. It feels like a punishment for braking, like something you shouldn’t do even though it’s necessary to let off the accelerator and use your air brakes to make it around corners. It’s an odd functionality, to say the least. This is especially so when considering that death by loss of health really isn’t a threat, because you regenerate health quite often. You have 3 lives in each race, and you’ll lose them by going off of tracks on the small sections where there are no walls. Enemy ships sometimes have things that can hurt or disrupt your racing, but ideally you’re out ahead of everyone anyway.

Speaking of which, I think that the ships that have turbo available as their special move are the smartest choice. Turbo is just such a universally useful thing, and can help with getting way out ahead of everyone, that I found it more useful than, say, the jump ability. The game makes you use one ship without knowing which ability you’re going to like, just right off the bat. It’s the kind of thing I dislike, not knowing what exactly I’m getting myself into. I suppose deleting and reinstalling to create a fresh game is an idea, but a suboptimal one. Maybe if the game let us test out the different abilities during the tutorial, it’d be okay. 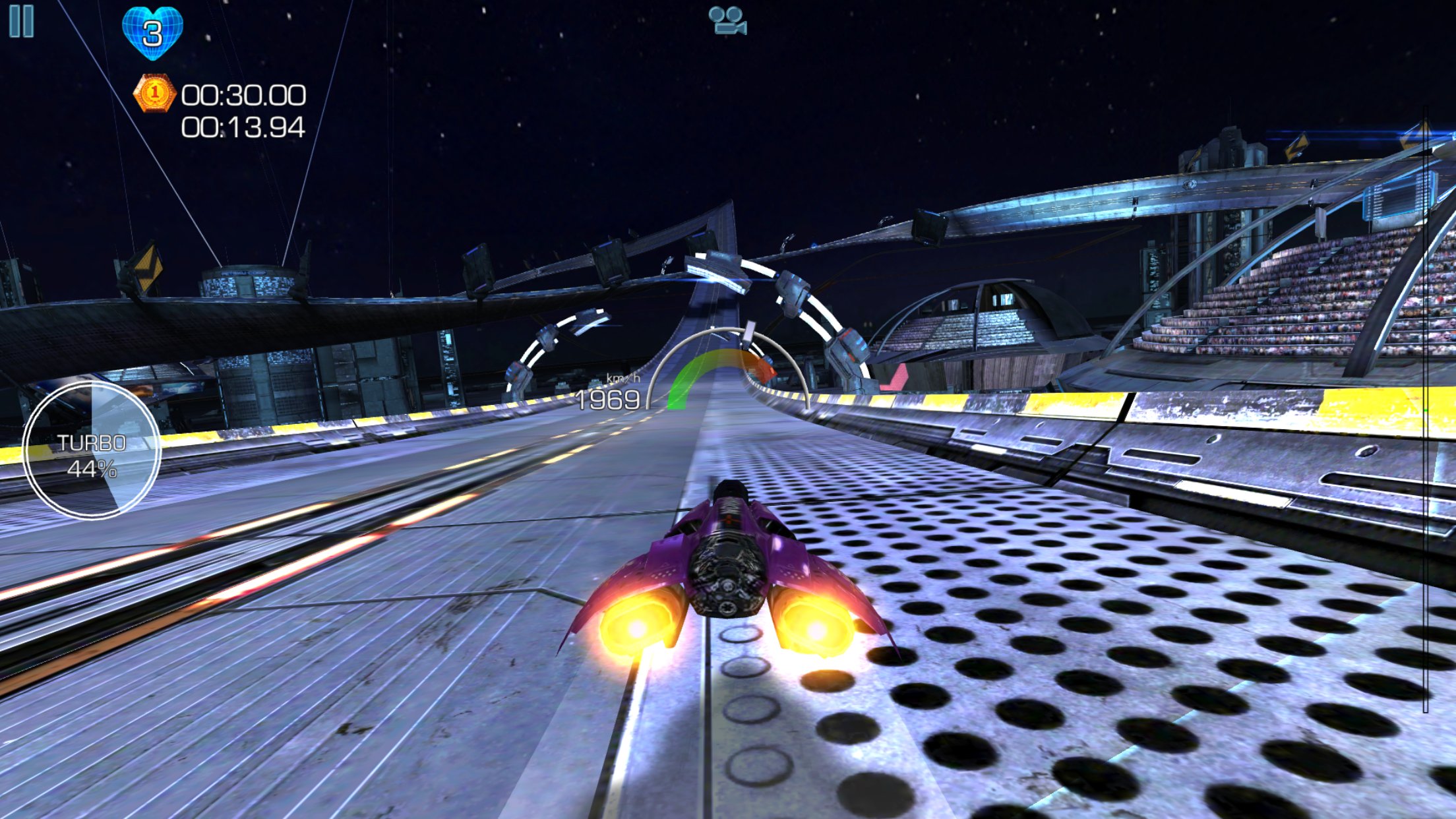 AG Drive was once intended to be a free-to-play game, and I’m glad that it went premium. I’m surprised there’s still not some sort of in-app purchases for more money here, but it’d be sad if this game had an energy system and more grinding than necessary. There are three standing events that you can always play that take less than a minute and get you a small amount of money, and are playable at three different difficulties. These feel like the biggest relic of the free-to-play structure, having these quick events to make the game work as a pick-up-and-play game. The races are generally pretty short anyway, you’re never quite tied down to anything. And hey, it’s kinda nice to have to earn everything, but with the ability to buy upgrades pretty often.

There is a lot to do here, with dozens of events in each tier to play through in order to get to the next one. Tier 3 is unavailable, and the game teases future events to come, which always does annoy me because there’s no guarantee that promise will become real, unless I have evidence that it will. Kumobious can promise future content for Bean Dreams ($2.99) they updated Duet ($2.99) continuously for a year. With a developer who’s brand new? Your promises fall on deaf ears until you deliver. I do wish there was iCloud support for carrying progress between devices, especially since this is using Metal! Use all those great iOS features at your disposal!

AG Drive is the epitome of a “good" game to me. The riskiest decision was perhaps admitting this should be a paid game and not a free-to-play game, and it’s better for it. Otherwise, this hits a lot of the checkmarks that a futuristic racing game should hit, and it’s a lot of fun because of it. It’s not innovative, but that’s not bad.