The first couple of months of 2015 have been kind of strange when it comes to Apple’s App Store regulatory practices. They have a set of fairly clear developer guidelines for creating iOS apps, but they’ve been famously inconsistent in how and when they enforce them. So far this year we’ve seen several instances of Apple suddenly deciding to strictly enforce developer guideline 3.6 which states “Apps with App icons, screenshots, and previews that do not adhere to the 4+ age rating will be rejected."

First was an issue with Gunslugs 2 ($2.99) getting its update rejected due to one of its screenshots depicting “violence against a human being." Strangely the game was originally approved just a couple of weeks prior with that exact same screenshot. As most people figured it looked like just a mistake on Apple’s side, and indeed they pushed that update through without requiring any changes. But that did show that Apple was looking more closely at the front-facing parts of its App Store.

The next incident was earlier this month when the action game Tempo ($1.99) arrived with its characters holding blurred-out weapons in the App Store screenshots. It looked quite silly, and even weirder is that Tempo was one of Apple’s Editor’s Choice features for that week. The drama surrounding those blurred-out guns caused several other developers to come forward with their own experiences of Apple requesting that they change aspects of their App Store media assets so as not to display violence or weapons. The developers of the upcoming Overkill 3 even tried to get ahead of the whole situation by completely omitting the weapons from characters’ hands in their promotional trailer.

So with all that groundwork laid out, what the hell is this all about? 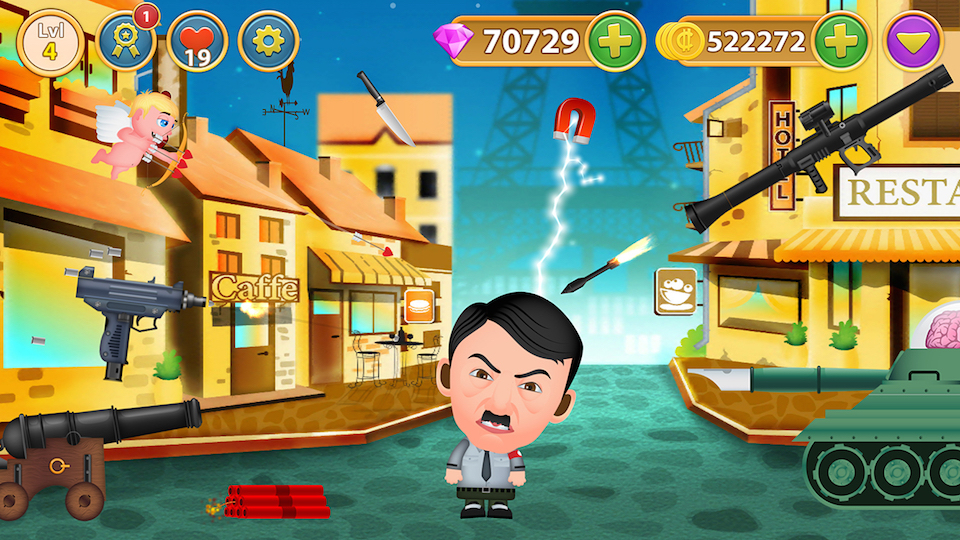 Now, correct me if I’m wrong, but I see an RPG, an Uzi, a knife, a cannon, dynamite and a tank all pointing at/shooting at a caricature of Adolf Hitler. On the decidedly less-violent side, I also see Cupid shooting an arrow of love at him, and a magnet shooting off a, er, “magnetism bolt?" at him, and on closer inspection the tank barrel may actually be a fountain pen and the tank itself is being driven by a brain. So… yeah. I guess the weird things cancel out the violent things?

I mean, I get it, this is meant as a totally silly, over-the-top game with cartoonish visuals and violence. Still, given the types of things Apple has taken issue with previously, it seems surprising that they wouldn’t have a problem here. Not just with the issues of weapons or violence, but Apple has been notoriously cautious with games that are political in nature. Even the name–Beat the Dictator – Funny Torture Game–seems in incredibly poor taste. I mean, it doesn’t matter how awful some of these world leaders are/were, there just isn’t that much that’s “funny" about torture, you know? 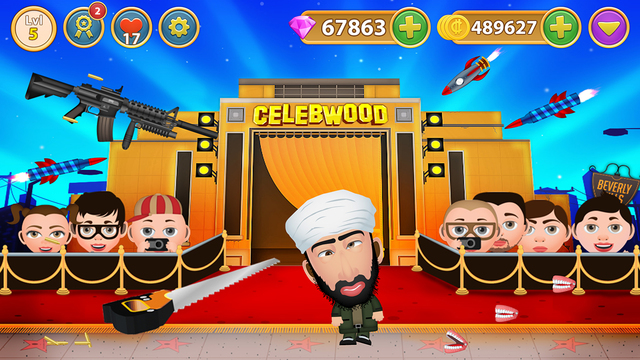 The thing about all this is that I totally understand Apple wanting to make sure their public storefront is safe for everyone to navigate. I personally think that targeting people holding weapons is a bit too overboard, but that’s their choice. What’s driving me crazy is just the wild inconsistency of how they’re enforcing their policies. As people have noted on these stories before, there are currently plenty of games on the App Store that show people holding guns in their screenshots.

It may just be that moving forward Apple will request developers change those screens, and it’ll be interesting to see what happens to a game like Modern Combat 5 (Free) when its next update arrives. With Beat the Dictator, is it the slapstick-nature of its violence that makes it OK? Apple is free to police their App Store however they want, but it sure would be nice if they could be more clear and consistent with their policies. As of right now, I’d be pretty nervous if I was a developer working on a new shooter game.