If it ain’t broke, don’t fix it. Swap Heroes ($0.99) was a solid game that combined a strategic quick-play focus with plenty of RPG elements. Swap Heroes 2 ($1.99) does pretty much the same thing – it’s the same gameplay, where one hero dying means game over. There are a new set of heroes with new abilities to use, but largely balanced in similar ways. The changes here are structural, and that’s not a knock on Swap Heroes 2: it’s kind of like when a band releases an album a year after their previous one. It’s not a huge jump, but you can often tell where refinements and improvements exist, and Swap Heroes 2 is just a better game. 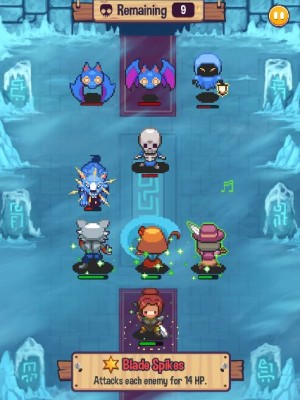 The gameplay is really quite similar to the original: you control a team of four heroes, with three on the front line and one in the rear. Each turn, you can swap two heroes’ positions, with rear-to-front swaps channeling a character’s special ability. As such, each decision is important as you have no room for error when a character dies, that’s game over. There’s still great pixel art here, with colorful sprites for both player characters and enemies. And the soundtrack has a particularly Super Nintendo feel to it, which is a welcome stylistic flourish to it.

The big change is that the game is now separated into 4 main sets of 2 levels each, with 25 enemies to defeat in each level to beat it. These sets have 3 difficulties to defeat, with two reasons to play on harder difficulties: one, you get bonus stars which can power up your team’s stats. Two, you need 10 stars out of the maximum 12 in order to unlock the final boss. So, yeah, it’s worth getting those stars. But as the bonuses make it much easier to beat later levels, it’s naturally worth replaying earlier levels to get those boosts to health or attack.

I enjoy this progression system for two reasons. One, the game allows for a greater feeling of progress versus having to play everything over again and again like in the original. Two, it means that there’s a variety of things to do, there’s less of a brick wall to hit when you have several options of things to do. You have to do well in order to hit that final boss, but there’s multiple ways there. 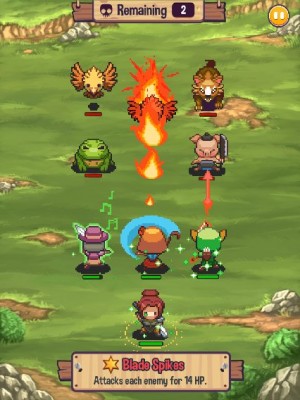 Also, the endless mode is a great addition for many reasons. One, it serves as great replay value for if you beat the game, you have something to do. If you’re trying out a team’s quirks, you can do so here. The stat boosts don’t apply, so you don’t have to play through earlier levels on harder difficulties, and you can’t win just by 3-starring everything, if you can. You have to earn your high scores here, though with character unlocks happening throughout the campaign, you are incentivized to beat all four of the five starting level sets. But it won’t net you any advantages.

Really, Swap Heroes 2‘s star feature and key flaw is that it didn’t change much. If you liked the original and just wanted the game to change around the structural experience a bit, which can have a huge impact on how a game is enjoyed, then you’ll dig this. If you never played the original, might as well jump straight into this as it’s the better game, with its tweaks. It also runs at 60 frames per second where the original didn’t until a post-launch update. But if you didn’t like the original game, there’s nothing here in terms of the gameplay that will really convince you that, hey, you’ll like this a lot better.

But I still love the core gameplay of Swap Heroes 2, I love the fact that it’s such a pick-up-and-play friendly RPG-style experience with plenty of strategy to it. I love the pixel art and chiptunes art aesthetic that this game has. This sequel is just a small step forward, not a huge leap. And considering that it’s less than a year later, that’s far from a bad thing!