As we’ve state before, it’s a tough gig to be an endless runner on the App Store. Nearly all are simply reskins of the same type of gameplay, requiring standouts to either significantly alter the formula (and risk losing that aspect that makes them so appealing) or offer a novel theme to that counteracts what is other standard gameplay fare. Daytona Rush  (Free) is clearly in the latter category with a pretty novel and well implemented theme of stock car racing. When combined with its (thankful) utter lack of IAP, good leaderboard support and great production values, Daytona Rush may be an endless racer worth trying.

Before you dismiss this as just another endless runner, Daytona Rush deserves some credit for implementing the formula very well. Players have three lanes to use to avoid oncoming traffic on a stock car track. Passing cars earns coins, while the run is measured in Yards and is used as the measuring stick of performance against other players. The basic three-lane approach towards avoiding oncoming cars melds with a good risk/reward formula trying to pass cars perilously close to your vehicle in order to earn extra coins. Rush also has a fuel system that has you keeping track of the gas in your car, forcing you to make pit stops between laps in order to refill (run out of gas and it’s game over). A multiple life system (as well as the ability to earn more during a run), tons of missions, and several cars to purchase and upgrade round out the game. 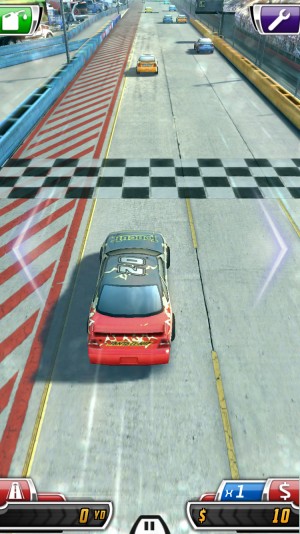 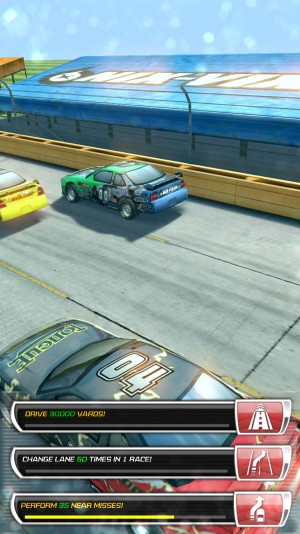 I really enjoyed Daytona Rush’s take on the three-lane endless runner. Difficulty scales really well during an individual run. Also, the game does a great job of creating an experience that feels overwhelming (due to the large number of cars on screen) but also lets you succeed in almost a zen-like state of tapping and passing without even thinking about it. Car upgrades are actually truly useful improvements that can affect the amount of times you ram into a car, gas mileage and turning speed.

On top of the fact that Daytona Rush is simply a good endless runner, its lack of IAP in any form is a welcome change. The game’s monetization lies in the ability to watch an ad at the end of a run that will instantly double the amount of money you earned during said run. It’s a completely fair system provides tangible benefits to watching an ad. This also means that, beyond upgrading your vehicles, there isn’t much in terms of a “pay-to-win” mentality. Personally, it makes me more likely to continually play the game as leaderboard position actually means something.

Other than the fact that Daytona Rush’s gameplay is pretty standard, there’s very little to complain about with the game. Visuals are awesome and nice touches such as crazy car crash physics make each run a little more fun. Discussions in our forums have uncovered players that seem to encounter bugs that crash the game after a certain amount of levels, but I haven’t experienced this myself. Regardless, Daytona Rush is pretty enjoyable and deserves at least a download.