One of the cooler games in the history of the App Store era of mobile gaming was 1-bit Ninja ($2.99), it being a platformer with a couple of neat twists: you could only move in one direction, generally forward; you could also shift the perspective of the screen to see ahead and to find where obstructions were actually background objects. It was a remarkably clever game, and one that is still fantastic today thanks to its recent update making it work on modern devices. 1-bit Ninja Remix Rush ($1.99) uses many of the same principles as that game, but with a new endless structure, that manages to be a great way to check this out for the first time, or as a way for people familiar with the original to get a fresh experience. 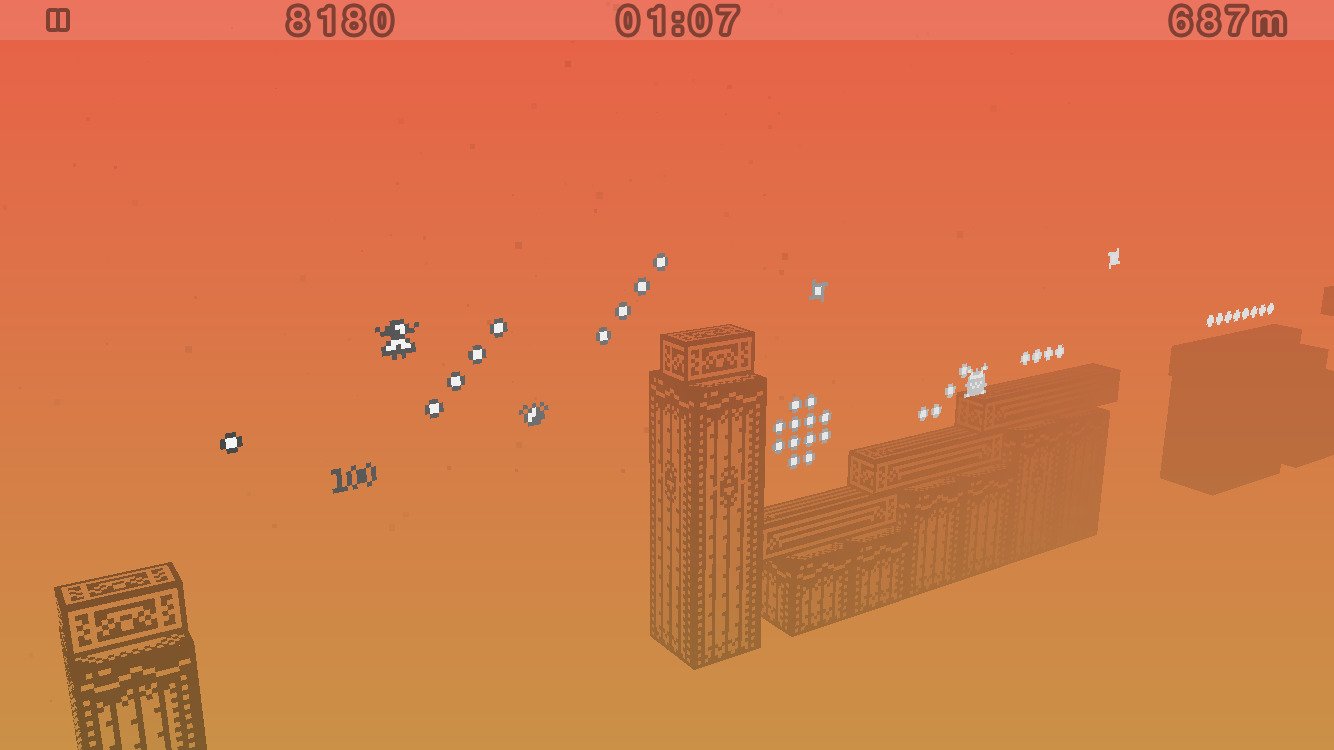 Remix Rush is still all about the simple controls: tap and hold on the left to run forward (unless you hit a spring, which can reverse direction), tap on the right to jump, with the ability to spring up higher off of enemies that you bop. The game eschews the perspective-shifting of the original, instead taking place at a constantly-askew angle. Levels are endless and generated procedurally, with the goal being to go as far as possible and collect as many points as possible before time runs out.

The game’s big change is thus largely structural, but it makes a huge difference in the game. Where the original was about vigilance for where to take secret paths and to time enemy bopping to get up to greater heights, this is more about survival. The core tenets of the game are unchanged, and the original had a time factor to it as well, but the way you have to approach the game is so much different because it’s an endless platformer.

As such, the game manages to use its unique mechanics in order to stand out among endless runners. There’s a certain challenge and intentional rigidity to deal with when you can only run forward. It forces you to be more careful when running along and navigating the platforms in the game, because you can’t correct your path, necessarily. But you also have control of when you run forward, so it’s a game not so much about reaction as it is recognizing the challenge ahead of you, and taking it on with diligence. The game feels and controls the same as it did back in 2011, but it becomes fresh with this new structure. It also helps that the original 1-bit Ninja didn’t really play like a lot of games, and it hasn’t really been imitated since then. 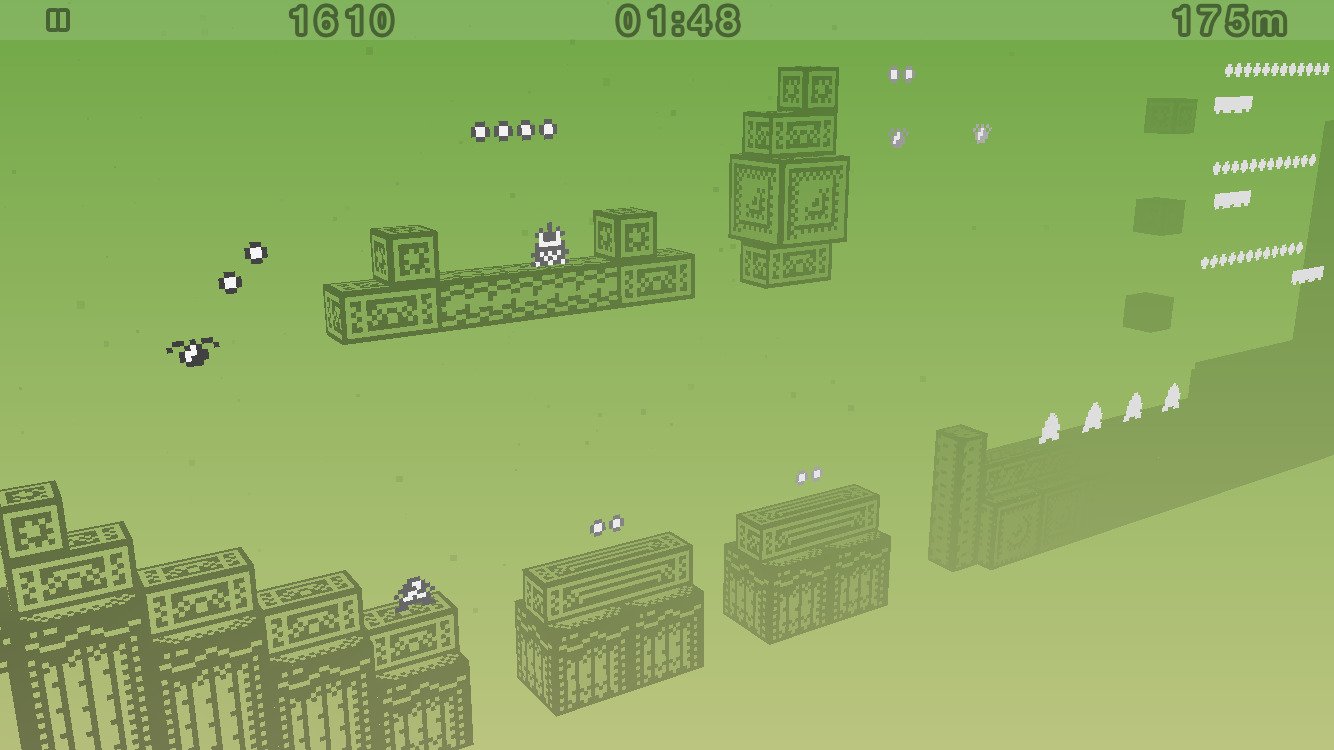 That rigidity can be tough to deal with: bouncing off of enemies has a weird feel, like it bounces you up in the air a lot higher than it should compared to the normal jump. As well, it can be frustrating to not have the ability to run backward, perhaps getting doomed because you went just a bit too far, or didn’t go far enough because you were trying to be careful. It’s possible that you might hate the feel of the game, and I wouldn’t blame you, it’s a bit odd and takes some getting used to with these physics. If you didn’t like the way the original 1-bit Ninja felt, you won’t like Remix Rush.

The ‘rush’ part of the title isn’t exactly a misnomer, but it’s something that you should keep out of mind until you become an expert at the game. That two-minute timer may seem ominous, but the rest of the game is so dangerous that it’s much more valuable to you to be patient than to be swift. As well, there are ways to extend the timer, either by picking up the five-second coins, or by getting the occasional sequences of coins that award two-second bonuses. Slow and steady is the way to go for a long time, making sure you get coins, avoid hazards, make the jumps you need to. Once the timer starts becoming a persistent threat does it become worth playing more quickly. Speed management: that’s not really a feature common to most endless runners! 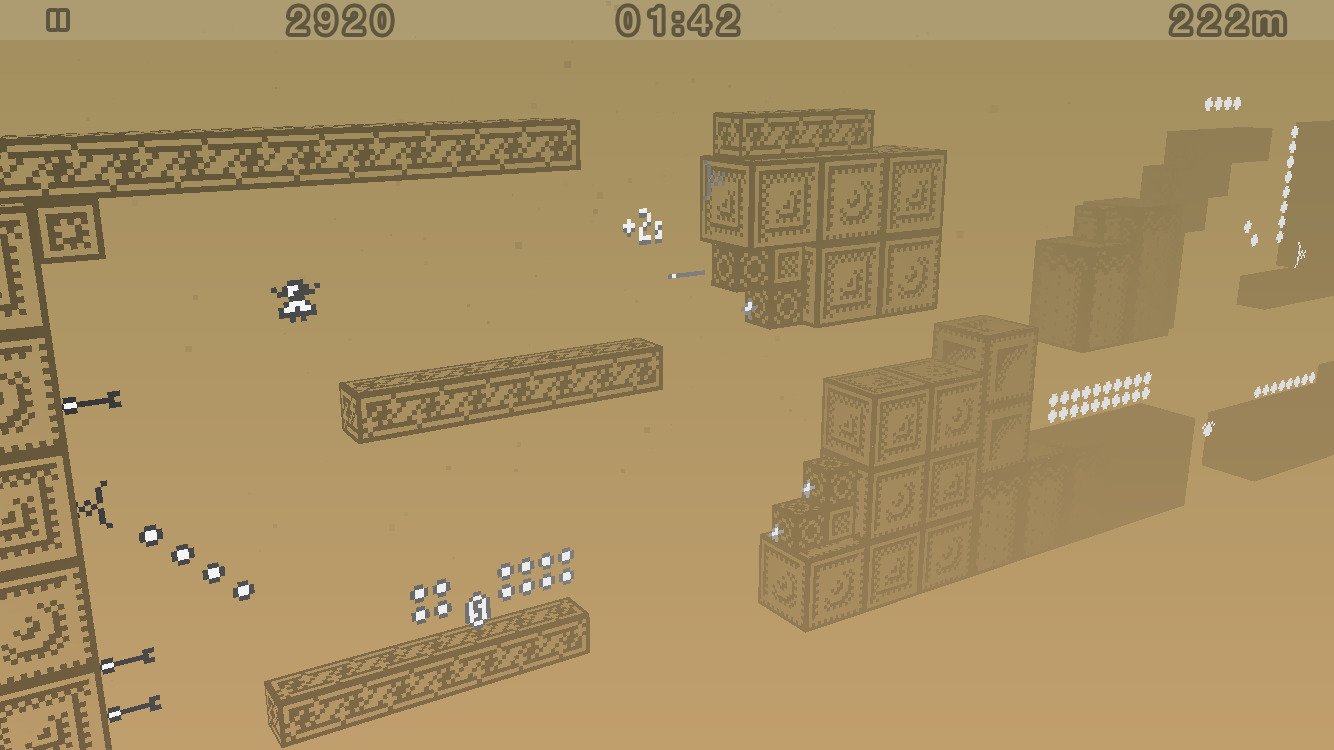 The game’s visual style is basic but still pretty cool: it’s got very basic, low-res pixel art that’s clearly inspired by the original Super Mario Land from the original Game Boy. If you played that game, you’ll love this art here. There’s also some basic gradient effects going on in the background that add splashes of color. The entire game takes place at an angle because the engine is three-dimensional, giving everything a slightly-visible flat, Paper Mario style effect.

I really appreciate 1-bit Ninja Remix Rush for what it is. It takes a concept established by the original 1-bit Ninja and makes it into something new just by changing how the game is structured. It’s a really cool idea, and is something I’d love to see other developers do with their previous games to build them out into fresh ideas. The physics of the game may be controversial, and this can be remarkably challenging because of them, but it’s a clever way to work around the challenges of touchscreen controls. If you never played the original game, check out the 1-bit Ninja Bundle, which is a dollar off of the combined price of the two games: they’re both very similar games but play entirely differently. They’re such cool and unique experiences that they’re both worth checking out, and if you loved the original, you’ll love this as well.