Some developers take a long time between game releases, making each one an often-painful wait between titles. If you’re a Nitrome fan, you have no idea what I’m talking about. The pixel art aficionados and creators of Icebreaker ($0.99) have been on an utter tear on mobile in the last few months, with five games since August 2014, and three since December 2014, with the third being Gunbrick ($5.99). Where Roller Polar (Free) and Platform Panic (Free) were both meant to be smaller arcade-style games, Gunbrick is a more fleshed-out, level-based puzzle-platformer. It’s a game that’s here and gone, though, being all too brief. 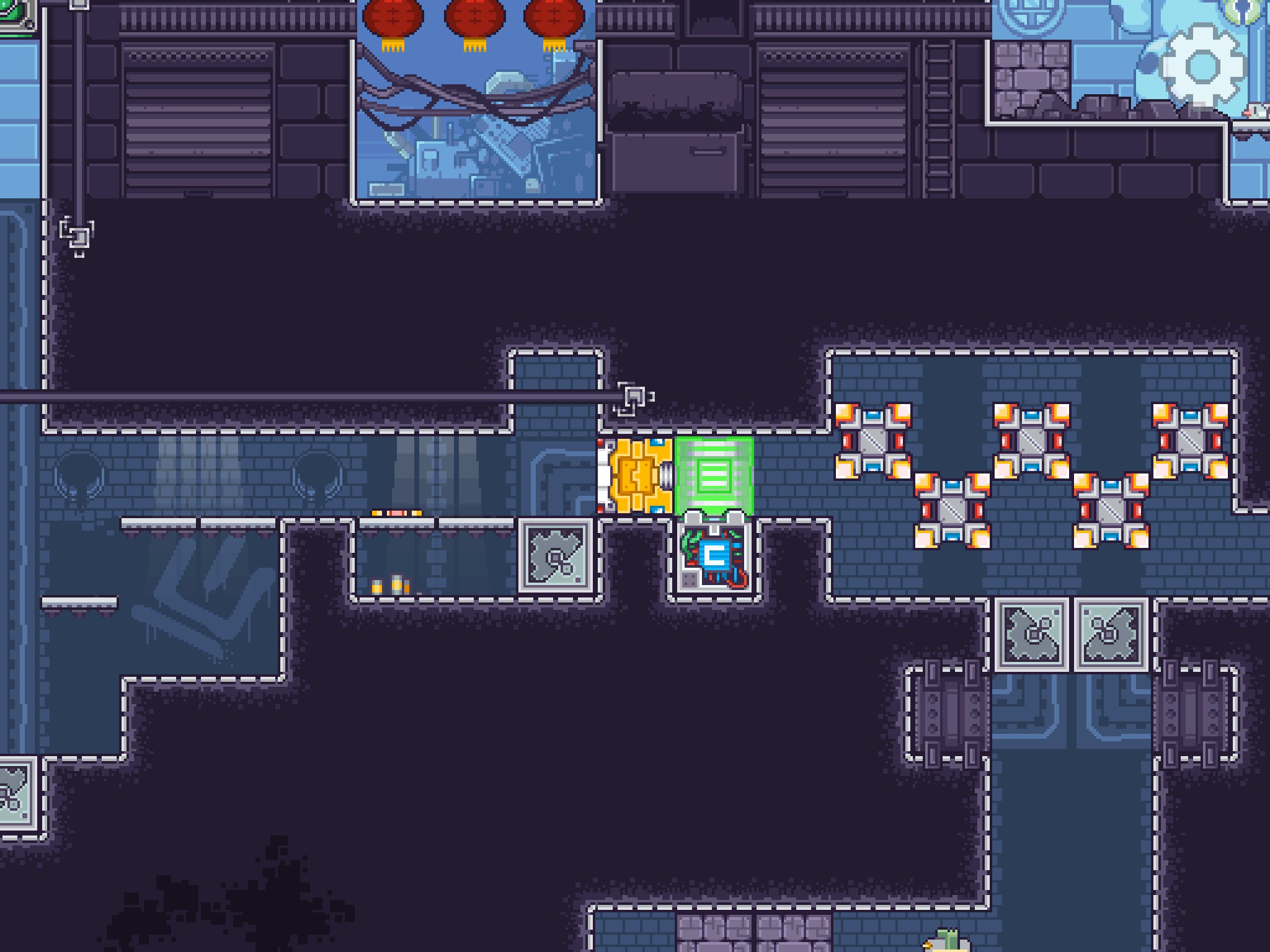 You control the eponymous Gunbrick, a large cube that can roll around from side to side, with one side able to fire bullets. The game does a lot with what amount to three simple commands. The gun can be used when pointed downward to fly up in the air and to float, like a jetpack. Using the gun when it’s horizontal will push the cube along the ground without turning over, which becomes incredibly important, as navigating the levels requires getting in the right position with the cube. As such, learning how many sideways shots you may need to make in order to get the cube pointing in the right way at the right time is the challenge of the game. It requires spatial awareness, and a knowledge of the game’s mechanics.

As such, Gunbrick is far more of a puzzle game than I really expected when I first heard of it, being a game where you control a giant brick with a gun. Many of the levels are beguiling, as there’s not a lot in the way of twitch reactions here, so the game’s about figuring out the challenge at hand and what you need to do. Each of the three worlds presents new elements like magnet blocks and new switches that continue to test players all throughout. For a game with such basic commands, there’s quite a lot of variety. Additionally, the boss fights at the end of each world are all standout moments. 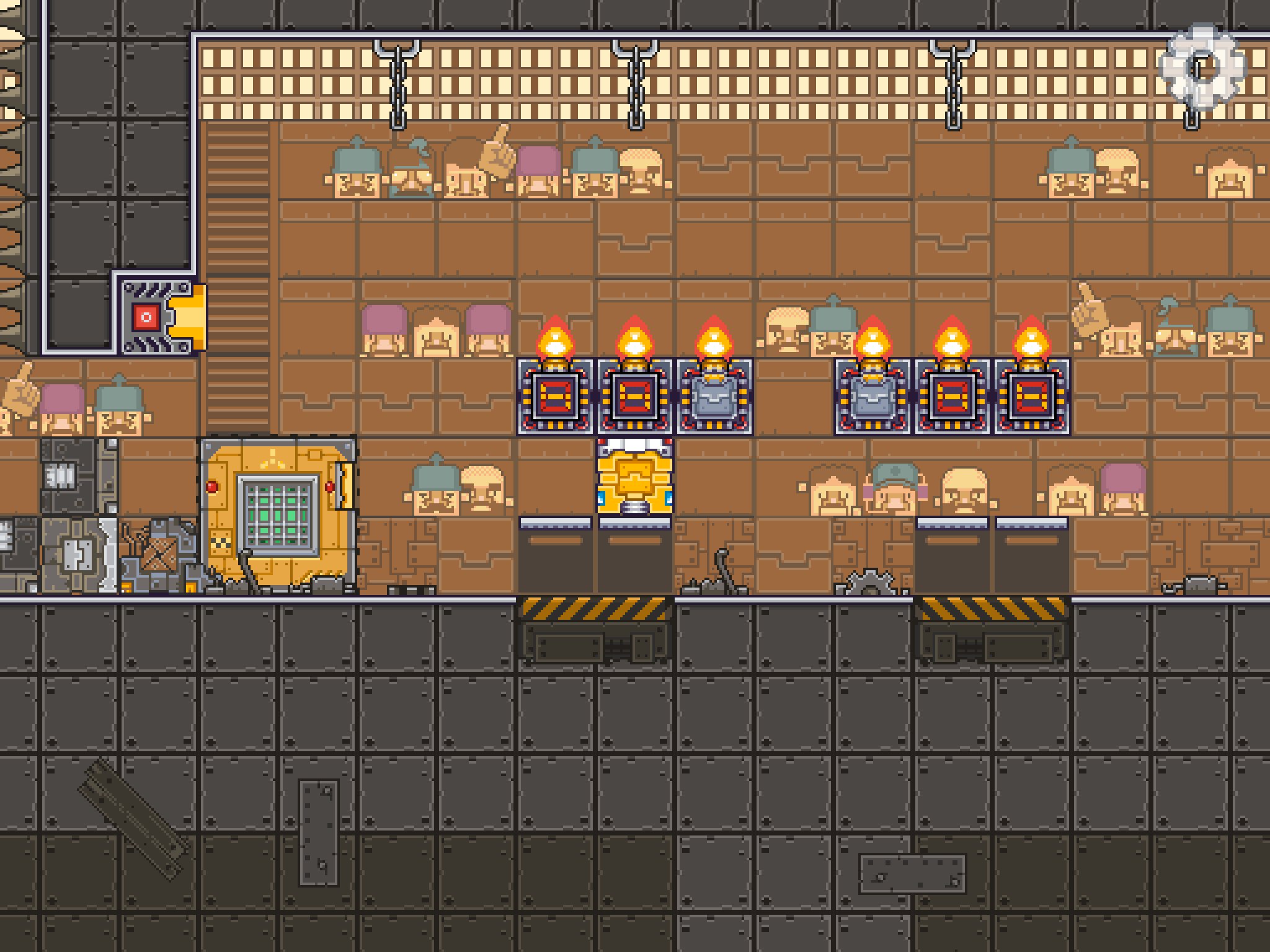 Nitrome’s pixel art work is still fantastic. It’s very detailed, and colorful to boot. It’s definitely their signature style, and they know how to make a style that pays homage to retro games, but also exists in the world of modern high-resolution devices. Gunbrick also wins the award for most the game with the most careless violence to bystanders since Retro City Rampage (which released on every platform but mobile), what with all the random people that can get squished while playing the game. The soundtrack is a cracking listen, but the game also doesn’t interrupt outside music, which is one of those features I always appreciate because developers often fail to figure out how to support that. I do wish Nitrome would support iCloud in their games, though.

I feel like Gunbrick is a bit lacking. There’s the 36 levels, and they prove to be challenging enough to beat, sure. But completing them is really all you can do. Why not have leaderboards for completing a level as quickly as possible, or even in as few moves as possible, some way to measure that? How about noting if I beat a level without dying? I know the game tracks it, there’s achievements for doing so in each world, but I’d like it to be denoted on a per-level basis as well. I’ve never really card all that much about achievements, especially on Game Center, so with these serving as the only replay value, with no competition against friends at all, it means that there’s not much reason to come back once the game is done. 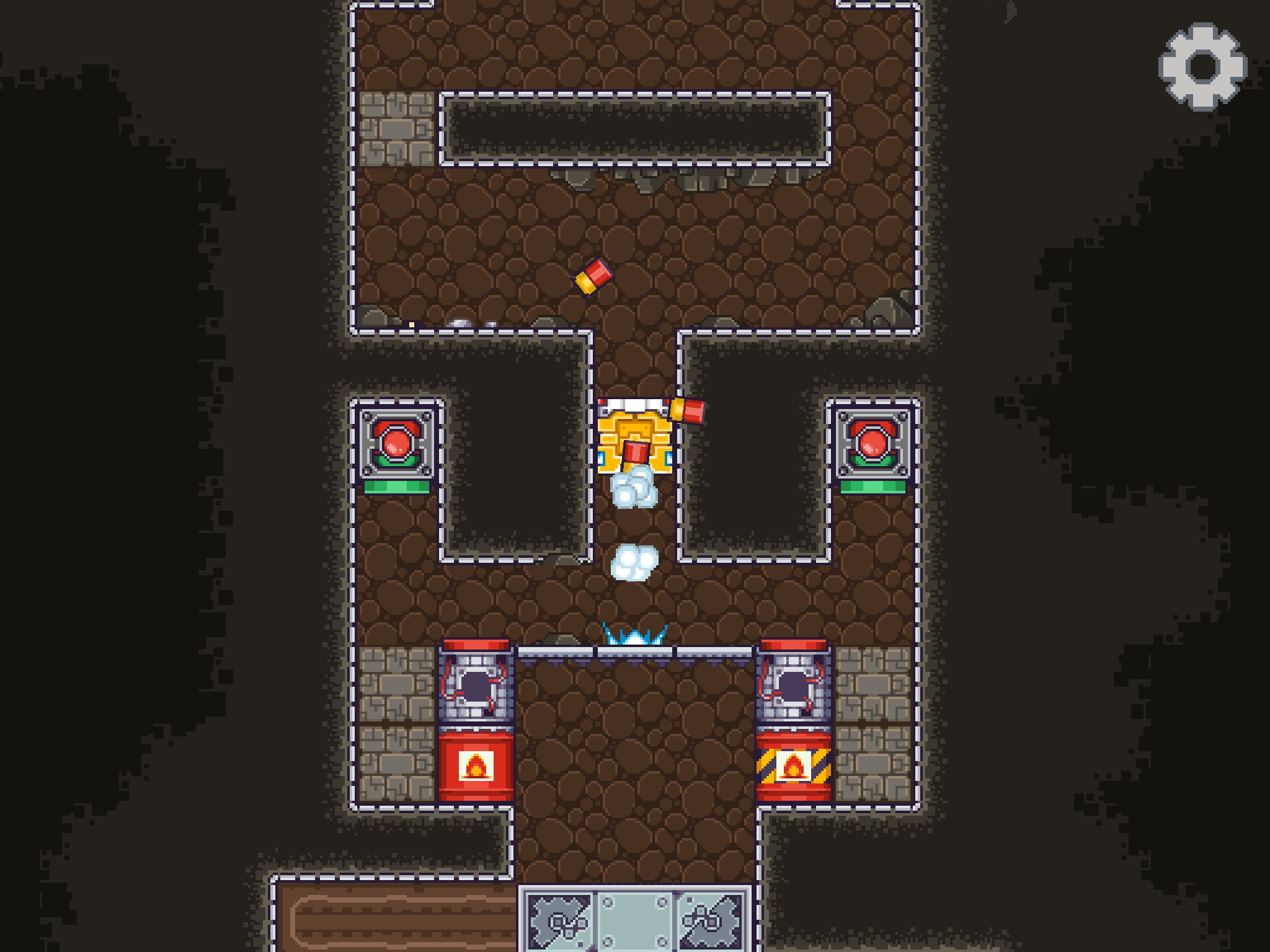 Hopefully the game will see more levels in the near future: I think there’s still a lot that could be done within the confines of this concept. There’s other ways to interact with the world, new traps to play with, even just having more devious levels that push the game to its absolute max degree of difficulty. Heck, I wonder if there’s a way to procedurally generate levels within this concept: imagine the Spelunky version of Gunbrick. There’s just so much untapped potential here, and I’d love to see it reach it.

Gunbrick is the perfect example of a game that’s good but not great, but not that far from greatness. With more content, and a further exploration of the game concepts introduced here, Gunbrick could be truly fantastic. As it is, it’s a game that’s definitely a solid way to spend some time, if not a bit disappointing because it could be so much more.