I often am asked how we come across some of the games we cover here at TouchArcade. While I can’t spill all of our secrets lest Eli end me with a single, swift swipe, I can tell you one of the things we keep an eye on is what the members of the TouchArcade forums catch on to. That’s how I first caught notice of a humble little developer by the name of Quantum Sheep, at the time fresh off of releasing a clever endless runner called Air Supply – Infinite ($0.99). It didn’t look like much from the screenshots or description in the App Store, but our forum was absolutely crazy about it, so I gave it an honest go and found it to be a very compelling game, with a wry sense of humor and an enthusiastic appreciation for the 8-bit computing era. Quantum Sheep’s next game, Air Supply – SOS ($1.99), took the Jetpac concept and gave it a good old twist, creating a frantic action game in the classic arcade style. SOS‘s development was fairly lengthy and the developer wasn’t shy about discussing it, so I had a good idea early on of what it was and when it was coming. 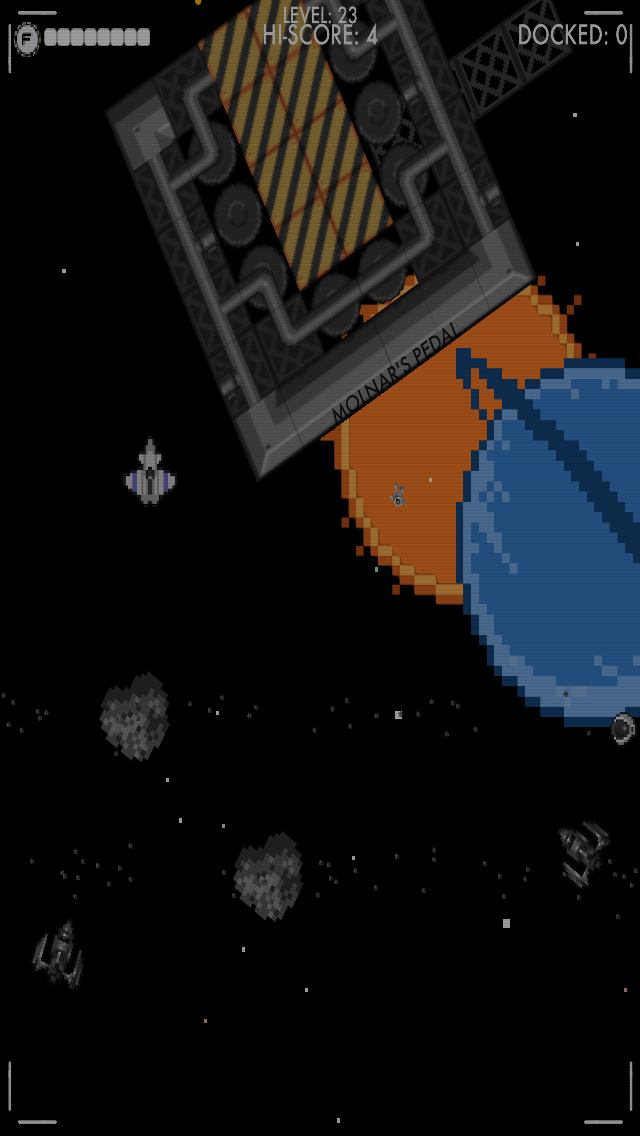 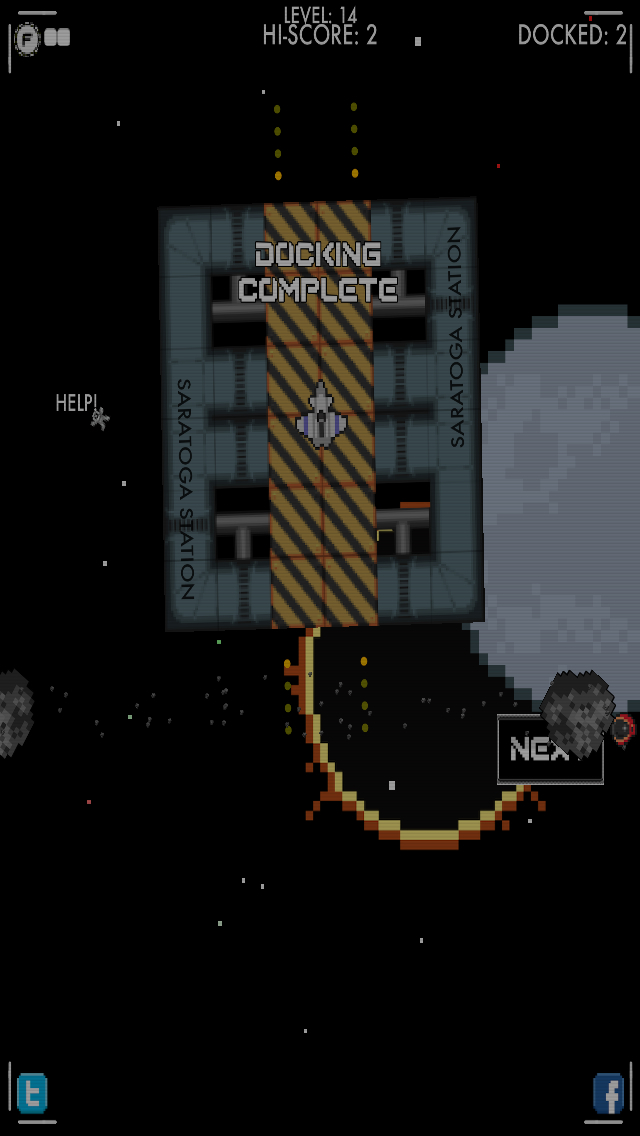 I was a bit more surprised when a game from Quantum Sheep called Docking Sequence ($0.99) arrived in my box. It seemed to come out of nowhere, apparently developed quite quickly after the completion of SOS, and it’s the first game I’ve seen from the developer in a while that wasn’t part of the Air Supply series. You’ll have to forgive me, I was somewhat skeptical of the game at first. The game’s rules are simple enough. You’re piloting a spaceship with a very small fuel tank, and need to make your way from station to station until you can reach home. Each stage is, appropriately, nothing more than a docking sequence. The stations come in different shapes and rotate at different speeds, and you need to guide your ship to the landing point without crashing into anything. The slightest hit will destroy your ship, so you need to move carefully, but every move consumes some of your precious fuel supply, so you have to be careful you don’t micro-manage too much. If you run out of fuel, a five-second countdown starts, and when it hits zero, you’re finished. 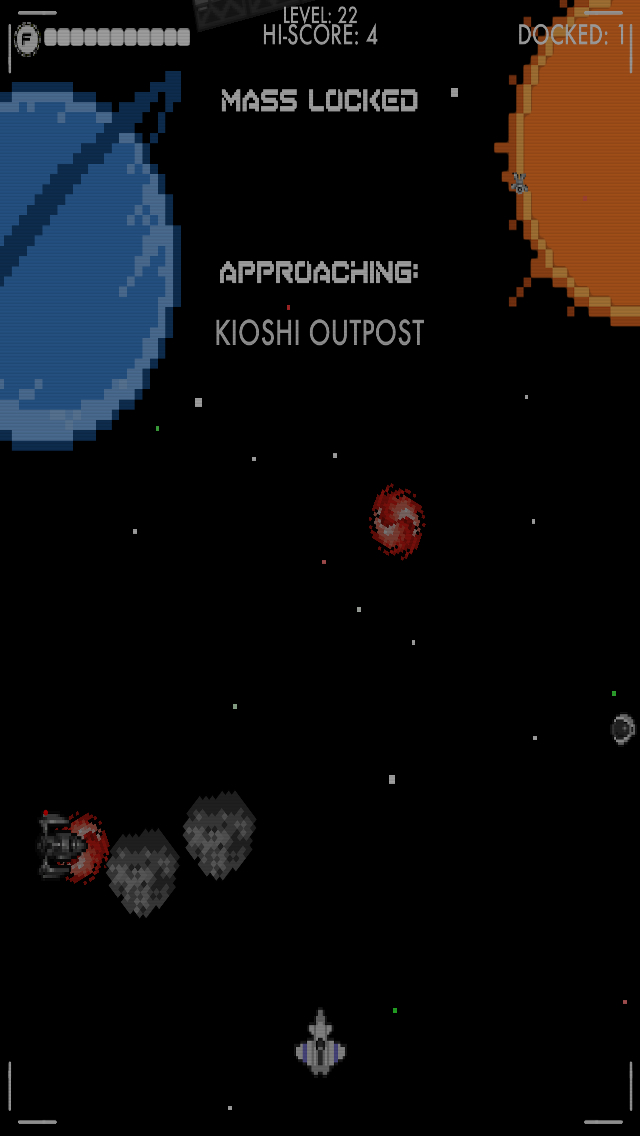 The route home covers ten different systems, each with ten stations, for a total of 100 stages. You can crash as many times as you like without worrying about losing your progress, but there’s a little counter up at the top of the screen that keeps track of how many times you’ve successfully docked in a row. I can assure you, if you start paying attention to that number, only madness awaits you, but we’ll get to that in a little bit. As you make your way through the stages, you’ll be introduced to various hazards and obstacles, like asteroids, mines, pirates who take shots at you, and wormholes that allow you to move instantly from one point to another. While exactly which hazards a stage contains seems to be fixed, their precise layout will be a little different with each attempt, along with the rotating station’s starting position. The number of deadly obstacles and the deviousness of how they’re laid out increases as you climb through the stages.

If you’re persistent, simply making your way to the end isn’t a difficult task. You’ll probably die plenty of times, but the right combination of elements will come up or you’ll nail your approach perfectly and, boom, you’re on to the next level. The only score the game keeps track of is how many times you’ve docked in a row, a counter that is obviously reset with each death. To make things more interesting, however, the game has the usual unlockables we’ve seen in past Quantum Sheep titles. You can unlock new ships, new music, and new color schemes. The ships are easy enough to unlock, since doing so only requires that you dock a particular accumulated total number of times, something you’ll presumably be doing anyway.

The music and colors, however, take a bit more skill than previous games from this developer have. New music is unlocked by successfully rescuing the floating astronauts you’ll come across in each stage. It’s not enough to simply collect them, you also have to make a safe landing with them in tow if you want them to count for your next unlock. Some of them will be directly along the path you’re planning to take anyway, but most won’t be. As for the colors, they unlock when you’ve stocked a certain amount of fuel. Since there aren’t any fuel pick-ups, stocking fuel means docking with extra fuel remaining. If you come in under the wire every time, you’ll never unlock any new colors, and what fun is that? Unless you want to listen to Johann Strauss’s Blue Danube and see the default colors every time, you’re going to have to learn how to play with a bit more nuance. 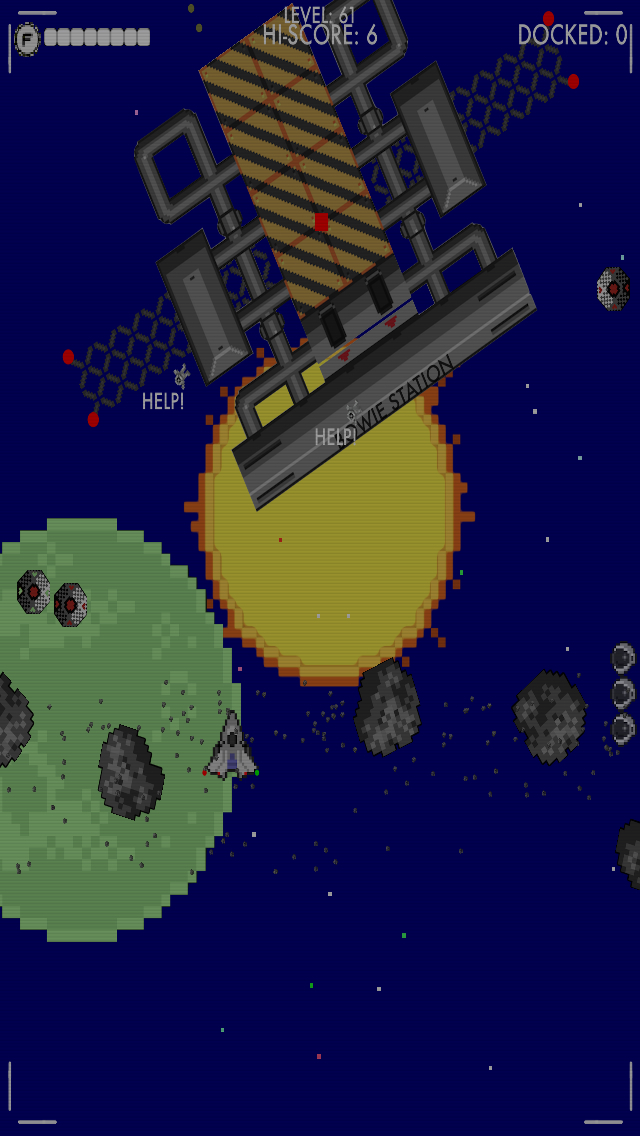 There’s quite a bit of room for that, as it turns out. Moving your ship is as simple as swiping in a direction, with the speed determined by how quickly you swipe. You can stop almost on a dime by tapping or holding down on the screen. Swiping uses fuel, so you’ll need to make it to the landing spot safely with as few swipes as possible. That means relying on momentum to carry you where you want to go whenever possible. Of course, leaving your movement up to momentum for too long is very risky, and picking up astronauts often requires course correction. This, I think, gets at the heart of classic arcade games, where simple controls often managed to translate into complex behavior. You’ll learn how to do everything you can in seconds, but learning how to use those actions to produce the desired results is something that takes a lot more practice.

Docking Sequence has a nice, layered approach because of all of this. When you start the game, you have to take a little time to get used to simply moving. After that, you’ll probably focus on just getting your ship to safety however you can. Then, you’ll probably want to pick up astronauts and conserve fuel for unlockables. Once that’s exhausted, there’s one more challenge waiting for you, and the ceiling on it goes sky high. It’s that score, you see, the one that tracks how many times you’ve docked without crashing. It’s very difficult to increase that score, even when you get pretty good at the game. Due to the semi-random layouts, you can sometimes get a really nasty surprise when you start up a stage, and if you want to keep your streak going, there’s nothing more to it than to somehow do it. Getting a high score in this game takes genuine mastery of the ship’s controls and how to react to the various hazards individually and collectively. When you’re on the verge of beating a target score, whether it be yours or a Game Center friend’s, every little motion is almost unbelievably nerve-wracking.

There’s an overall lack of polish in the presentation, particularly with how the graphics are distorted on certain screen dimensions, and the added detail in the sprites compared to the Air Supply games makes that end of things stand out even more than in previous titles. But as the bard said, the play’s the thing, and in that regard, Docking Sequence is quite sturdy for its asking price. It’s simple and challenging enough to hit the spot as a twitch game, but has just enough depth to it to give it a little more chewiness. Finding the perfect balance between precision and efficiency is an enjoyable skill to develop, and the unlockables provide a steady stream of incentives to do just that. While Docking Sequence is a lighter game than Air Supply – SOS, a similar heart beats in its chest, pumping out a flow of love for 1980s computer games, the science fiction genre, and cheeky British humor. Once you start going for score streaks, it’ll likely have you swearing up a storm, but there’s a certain joy in that.