The mobile platform has allowed for quite a bit of experimentation. I’ve seen callbacks to the NES era, 16-bit, and more 32-bit remakes than you can shake a stick at (I’m looking at you Tomb Raider 1 and 2). But often times developers will put their own dose of charm into a game despite the fact that it doesn’t belong in a single era — and you get that feeling with Dojo Slash (Free) right from the get-go following a faux-DOS intro.

Dojo Slash is deliciously simple. It’s a one-button game where tapping slashes where you tap, and holding the screen will let you walk toward your finger. That’s basically it. You can constantly slash if you want to move as well, and eventually as you upgrade your lunges it’s probably best that you do it that way anyway — but the precision is there if you want it. 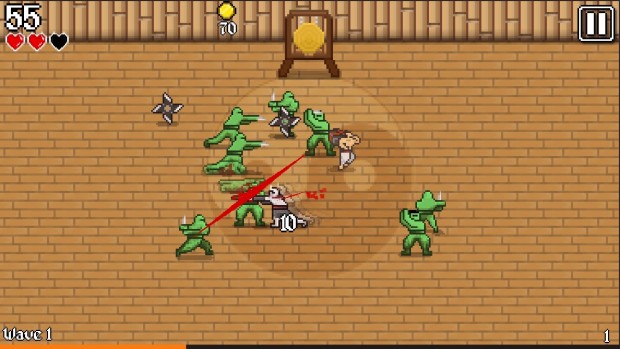 The slash-centric gameplay facilitates plenty of ninja kills as you take on enemies of all shapes and sizes. It’s basically a score-attack game where you last as long as you can, fighting wave after wave as they pour out across the screen. You’ll have to be quick to slash as each board can often fill up with foes very quickly, and there’s little time for idle movement.

This also ties into the combo element of Dojo, where constant kills will net you more points, and thus, experience. Every time you reach a certain experience goal you’ll level-up, which lets you choose from three random upgrades. Slash employs a pretty cool pixel art style, and each locale is changed for each round to spice things up. 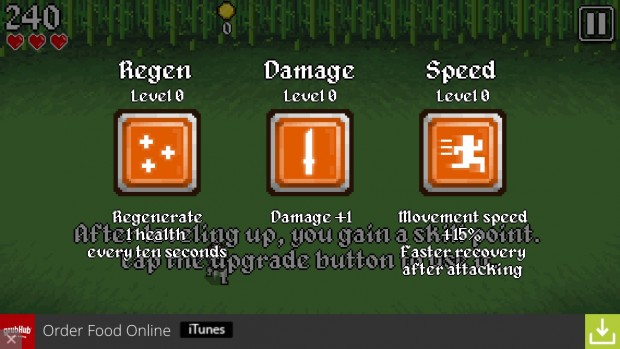 You don’t get to carry over any of these upgrades after death, so each game will feel a bit different as you cycle through various builds. There is an in-game currency system built in though that lets you upgrade your equipment over time — even if it’s a bit too grindy for my tastes. The grind is easier to take in though when you consider that there’s almost zero IAP involved. In fact, the only real upgrade is a $0.99 option to remove ads. Ads that aren’t even that bad to begin with mind you, and that particular IAP is buried heavily within the obtuse upgrade menu.

There’s also some complexity involved, as you can force enemy spawns by hitting a gong at the top of the board if you want. A Golden Axe-esque apprentice will additionally skitter about the battleground dropping items from a sack. It’s not groundbreaking, but the developers have done enough to make it the experience more interesting. And again, it all looks great with their smooth art style.

Dojo Slash is just plain fun, and for a nominal fee and hardly any IAP involved you can have a good old arcadey time. I wish there were a few more upgrade paths and perhaps a “quest mode" where you do keep your level-ups, but as it stands I’ve spent a decent amount of time slashing up people.