I don’t think I’ll ever be accused of being stingy with my words, but if I were to wrap this entire review up into a short summary, here it goes. If you enjoyed Record Of Agarest War ($5.99)’s seventy-something hour campaign, spent dozens of hours more to fully complete everything, and still find yourself wanting another full-sized game offering a similar experience, you should buy Record Of Agarest War Zero ($5.99). That’s essentially the only scenario where I can see recommending this latest release from HyperDevBox, because just about everyone else with an interest in the Agarest series ought to be starting with the first game anyway. Agarest Zero tells a new story with new characters, but the underlying gameplay offers virtually little of note over its predecessor and actually streamlines a few things out that I’m not sure needed to be ditched. 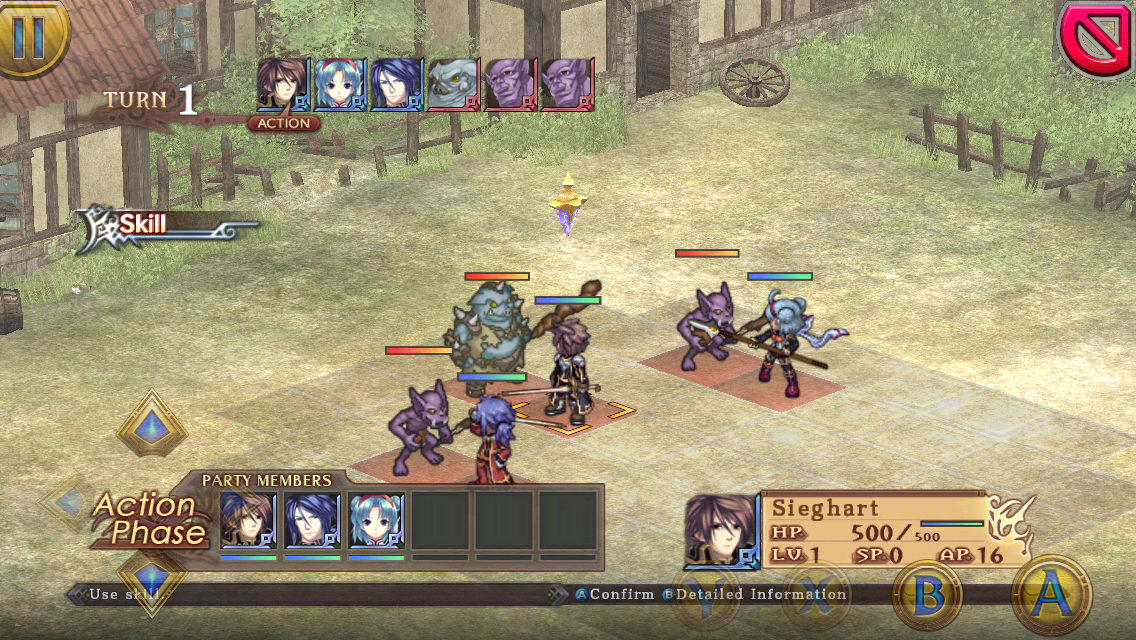 Agarest Zero is a prequel to the original game set in the same world. This time, you follow the story of a young soldier named Sieghart who meets with misfortune while trying to protect a young girl he comes across on a routine patrol. He’s magically brought back to life with more power than before and is soon pulled into an operation to unleash an imprisoned god to help his side win the war, which is totally not a secretly evil plan by obvious bad guys, what are you talking about? In typical Agarest tradition, he’ll soon be joined by a flock of lovely ladies in improbable outfits, a few of whom are eligible and looking, gents. The generation system from the first game returns, but in far more limited form. Rather than the five generations covered in the original, here there are only two. After finishing Sieg’s portion of the game, you’ll then continue on as his son Leonis, whose appearance and stats differ depending on who his mother happens to be.

That pulls back on the scope of the story somewhat, but the adventure is just as long in practice. I can see why they cut back on the number of generations, as each one makes things that much more complex to plan out. Still, it ends up toning down one of the more interesting elements of the original game. If you’re not into the dating simulation aspects, you might be breathing a sigh of relief at that, but don’t pop the champagne just yet, because Agarest Zero is still dripping with choices that will have hard-to-predict outcomes on your relationships with the women in your group. In keeping with the smaller number of generations, the total number of playable characters is also drastically reduced, from 34 to 15, though given that much of the cast felt like throwaways in the first game, it’s not a huge loss. In a way, the smaller cast and shorter span of time covered makes Zero‘s plot feel a bit more personal. It’s still not a great story, and it’s almost entirely conveyed in text dumps, but it’s a bit easier to connect with everyone when you’re not switching generations every ten or so hours. 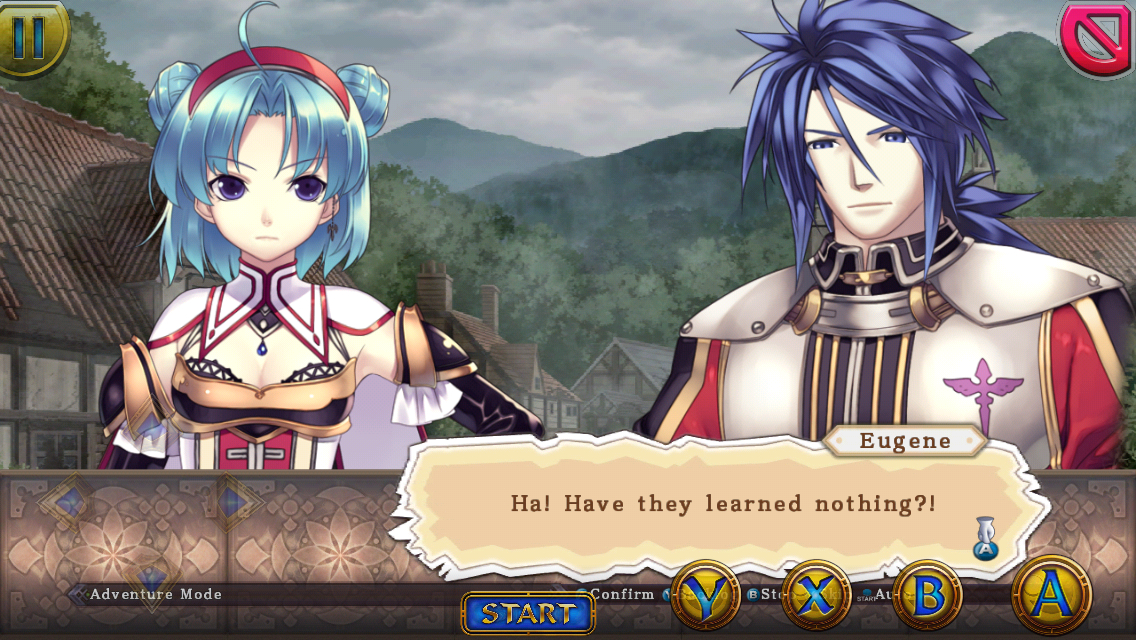 The gameplay sees some cuts, too, though some might not be bothered much by it. The original game was an odd sort of strategy game in that it had dungeon exploration segments outside of the battles. These parts of the game didn’t work quite so well with touch controls, and they weren’t nearly as well thought-out as the battles, but they were noteworthy for their novelty in an SRPG. Well, Agarest Zero chooses to focus on what worked best, so you won’t be doing any wandering around this time. You simply travel from battle to battle, sometimes with a little text in between, sometimes a whole lot. It plays out a lot closer to a typical SRPG, showing you an overworld map with points of interest on it. You might have a few spots between where you are and where you need to go, but they serve as little other than random battle fodder. Before too long you’ll open up towns where you can buy items or do some crafting as in the original., but most of the game is spent fighting.

It’s a good thing the battle system is as competent as it is, though it’s essentially unchanged from the first game. There’s a strong emphasis on positioning relative to your other characters, with tight formations giving you access to insane combinations of special attacks that can clear the board in a hurry. Every character has different formations they like to work with and a different set of attacks, so finding a good team is vital to making sure battles don’t last any longer than they have to. I think a lot of the problems people have with the Agarest games is that they don’t take proper advantage of this system, leading to far too many drawn out battles against trash mobs. It certainly can’t be blamed on the game not teaching you, because it positively clubs you over the head with its overly-long, unskippable tutorials. It sure would be nice if there were an option to skip those, especially since there’s nothing new to learn if you’ve played the first game. 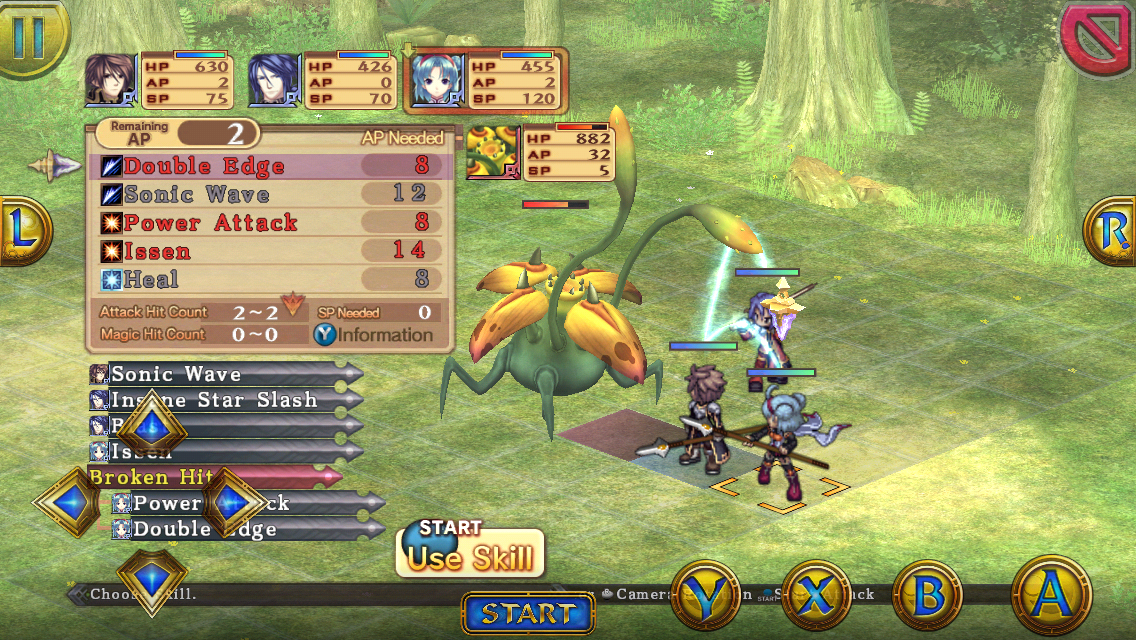 Unfortunately, most of the faults of the original also carry over. The lack of variety in the graphics, the fact that battles don’t take terrain differences into account, the UI designed for consoles with virtual buttons set on top of it, the inability to save mid-battle, and the sheer tediousness that makes up almost half of the game’s extremely long running time are all things I could have lived without experiencing again. This one’s definitely for the fans, not the critics, so if the first one left you cold, I can assure you with near-total confidence that you will not like Agarest Zero, either. HyperDevBox did a really faithful job of porting the game, as they always do, but there’s not much they can do when the source material is what it is.

As before, the default controls use virtual buttons that obscure some of the UI elements, with a button to clear them off the screen as a sort of compensation. There are at least a handful of button configurations you can choose from, and two different types of touch controls that I found didn’t work terribly well. You can also use an MFi controller if you happen to have one. Although there’s supposed to be Game Center support, it didn’t ever seem to work for me. Happily, there is iCloud support, which is very welcome in a game that takes up a massive amount of memory space like this one. All of the IAPs from the console version of the game are here, set at similar prices. They don’t tell you how much each one costs until you go to buy it, but at prices like $5.99 for a set of costumes, it’s perhaps understandable why. Most of the items are cosmetics like costumes or cheat items, but there are a few extra dungeons and such in the list as well. There’s a fair bit of voice work in the game, but it’s all in Japanese so I imagine that’s going to be little more than flavor for most English gamers.

To reiterate what I said at the start of this review, Record Of Agarest War Zero is little more than another heaping helping of Agarest, and as such has a very specific appeal to it. While I think a lot of its streamlining is in theory moving in the right direction, the actual pacing problem hasn’t been addressed very well at all. It’s not a bad game, and I think that you again get quite a lot of gameplay for your money here, but I’d caution any prospective buyer to consider if that’s really what they’re looking for. It’s not quite the game that the first Agarest was, so I’d recommend that one first, and after that, if you truly want more, you’ll likely enjoy what Zero has to offer.