Gamebook developer Cubus Games is only on their third swing at the genre, but they’ve already become a player worth paying attention to in that sphere. So far they’ve released the off-beat horror tale The Sinister Fairground ($0.99) and the crazy yet awesome sci-fi story Heavy Metal Thunder ($3.99), both bringing themes and unique writing styles that helped them stand out in an increasingly crowded field. Their newest game, Necklace Of Skulls ($2.99), is an adaptation of a 1993 book by veteran gamebook author Dave Morris, whose name you might recall from inkle’s recent take on his book Down Among The Dead Men ($2.99). It carries on the same strengths as Cubus’s earlier releases, with an adventure through an exotic backdrop of Mayan mythology, relayed in captivating fashion by Mr. Morris’s usual top-shelf writing.

You play as Evening Star, though you have some degree of control over who exactly Evening Star is. When you start the game, you’re presented with a choice of four different character types, and depending on which you choose, your path through the game will have to be somewhat different. The proud and assertive warrior can go far with his knowledge of proper etiquette and folklore, while the crafty huntress is more well-suited to the wilderness than civilization. Whoever you choose, your main goal is the same. Your twin, Morning Star, has gone missing while on an expedition, and you need to find out what happened to him. The story connects to an issue of larger importance, of course, and while the initial quest doesn’t exactly seem easy, things get a lot more complicated along the way. 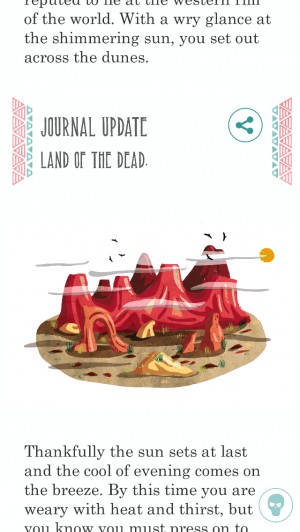 Your journey will take you through a few cities and towns, perhaps a forest but perhaps not, probably a desert, potentially through the underworld itself, and if you’re good enough, certainly a wizard’s palace, amid other locations. It’s highly unlikely you’ll get to see every location on a single playthrough, but the game makes you aware of them by including them in the chapter list, tickling at your curiosity. My first playthrough, I noticed that I skipped the forest chapter, so I started a new game just to see what was in there. I really like how Cubus lays out the contents of the book this way, since I’m sometimes not sure if I’ve seen everything in any given gamebook. The locations themselves are vividly described, giving a real sense of a connected place where all kinds of unexpected things can happen. Writer Dave Morris apparently visited the region before writing this book back in the day, and it shows in the thoughtful attention to detail.

Necklace Of Skulls is considerably lighter on combat than Heavy Metal Thunder, with only a handful of battles to be had even if you go looking for them. Even though combat is a relatively small part of the game, Cubus has come up with a nice way of handling them without resorting to the old stand-by of rolling dice. Each turn of battle, you and your opponent can each take three actions. You have a set number of maximum stamina points that restrict how many of those actions can be attacks. Attacking uses two points of stamina, while defending restores one point and resting restores three. After you choose your three actions, your opponent’s actions will be revealed, and the results for the turn will be tallied. The ideal goal here is to defend when your opponent attacks, attack when they’re resting, and rest when they defend, but unless you’re playing a sorceress, you have no way of knowing ahead of time what they’ll do. Perhaps a tell along the lines of how inkle handles combat in Sorcery! ($4.99) might help this system reach its full potential. I don’t have a problem with using dice in games, but I like seeing new ideas, and this one certainly shows promise. 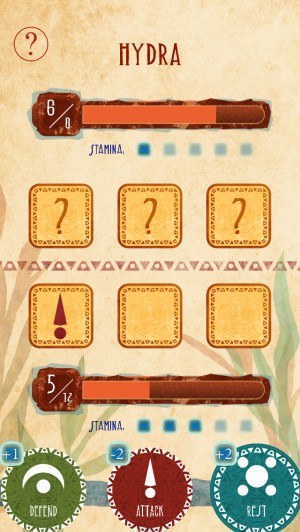 Aside from that twist on combat, Necklace Of Skulls plays pretty similarly to traditional gamebooks. You’ll read some text, make some decisions, try to manage your inventory like a psychic, and gather the clues you’ll need to make your eventual winning run. Compared to efforts from developers like Tin Man Games, this game is a bit light on options. You can adjust the font size and play around with the volume settings, but there aren’t any cheat options to help you through. The game gives you three different save files, checkpoints frequently to allow you to recover from a big mistake, and lets you restart any chapter, which I think offers a reasonable compromise for those who don’t like their gamebooks to be too difficult. It’s a fairly challenging adventure, and like many gamebooks, you’ll probably have to do a few dry runs before you have all of the information you need to win. There’s a bit more replay than most gamebooks since each of the four character types needs to do slightly different things to succeed.

I like the subtle ways the presentation enhances the experience. Instead of using music, you’re instead treated to the ambient sounds of whichever location you’re currently in. The art is beautiful and vibrant, contributing greatly to the atmosphere established by the words. Each piece of art has just a few touches of animation, bringing the pages alive without being too distracting. You also have easy options to share your progress on Twitter or Facebook, if you’re into that sort of thing. The game will even reward you for doing so by giving you a little extra cacao, the currency your character uses. Unfortunately, there’s no support for Game Center here. I hope it’s something Cubus looks into for their future books, as achievements give an extra incentive to poke around every choice and option. That said, the chapter selection does show you how many sections you’ve uncovered out of the total, so you can certainly set yourself to filling that out as an extra goal once you’ve completed your mission.

Necklace Of Skulls is an enjoyable adventure with an interesting theme and sharp writing. On top of that, this is an overall excellent conversion on Cubus’s part, enhancing the existing strengths of the work without taking away a thing from it. Gamebook fans should have quite a nice time untangling its mysteries, along with anyone who is intrigued by its unusual Mayan setting. It’s nothing that will convince those who are turned off by these kinds of games, since it sticks pretty close to conventions in terms of its mechanics and how it unfolds. As an example of the genre, however, it’s a fairly strong one.