While soft-launched for nearly half a year, it really wasn’t until we saw Vainglory (Free) during Apple’s September event that we’ve been keeping a close eye on it. Super Evil Megacorp’s keynote presentation was more than just a cool demonstration of Metal — it was also a pretty damn cool looking MOBA in its own right. With its recent end of its lengthy soft launch period and subsequent debut in the US Apple Store, we thought we’d take it for a spin and see how it compares to other iOS MOBAs. Suffice to say, I think Vainglory is one of the best genre offerings available and sets the bar in terms of visuals, balance and controls.

For those that haven’t been exposed to MOBAs before, here’s a quick tutorial. Multiplayer Online Battle Arenas have been around on the PC for quite awhile, with DOTA (now DOTA 2) and League of Legends being the most popular of the genre. Players choose from a variety of heroes, each with their own special abilities, and participate in 3v3 team battles with the goal being to slowly make your way to the enemy stronghold and take out their base (or, in the case of Vainglory, taking out the Vain). 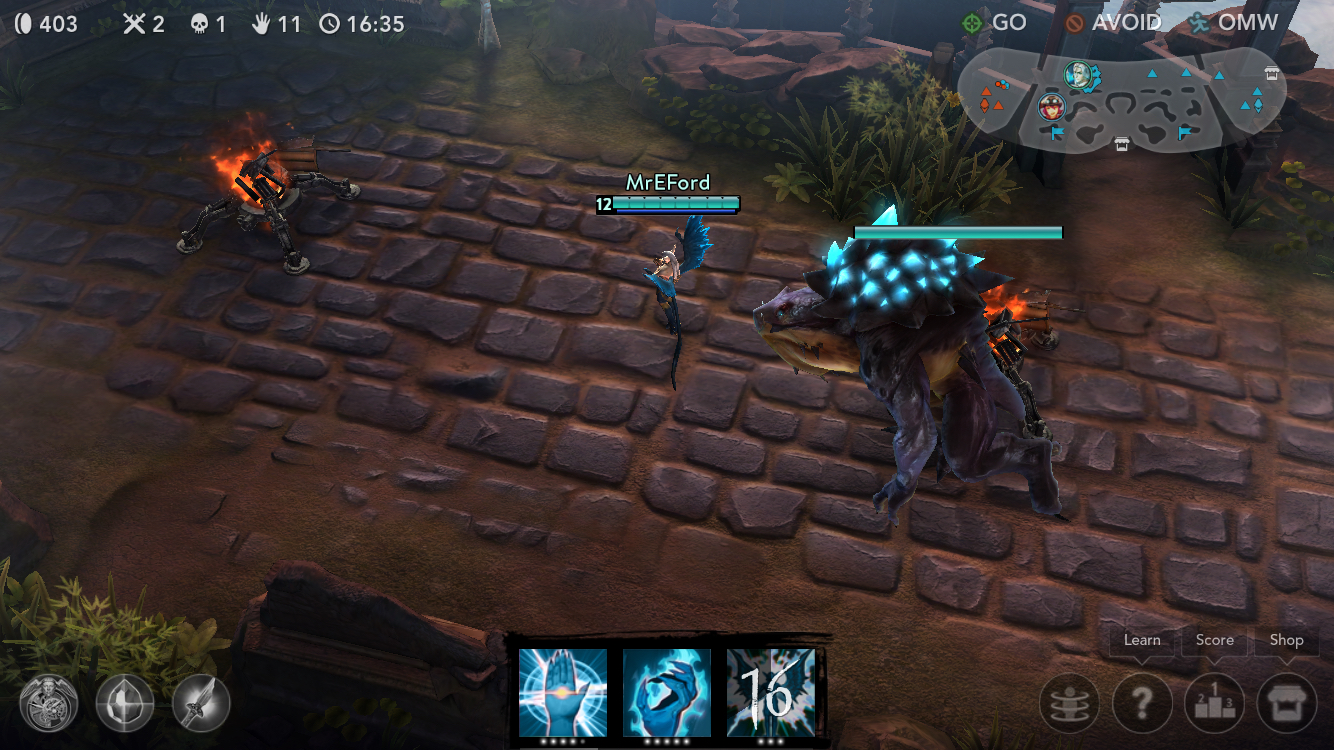 MOBAs typically feature creeps, which are automated allies (and opponents) that blindly charge towards the opposing base, attacking anything in sight. A lot of the action in MOBAs takes place in lanes, which feature towers that must be attacked (or defended) and are the paths that creeps run down. In essence, MOBAs charge you with using your hero to destroy the opposing creeps, attack/defend against heroes, gain experience and gold, improve your character and eventually make your way to enemy base to win.

Vainglory includes each of the major MOBA elements but modifies them to fit its own playstyle. For example, the game includes creeps (called Minions), but its map only one lane, simplifying lane management. However, the game has a pretty robust jungle area with plenty of over brush that can hide your heroes. The jungle also has plenty of neutral creeps and a shop in the middle for item purchasing needs. Vainglory’s jungles also include three important keys to victory: Minion Mines, a Gold Mine, and the Kraken. Minion Mines are initially controlled by a strong neutral Minion Miner. Take him out, and your minions last longer and deal more damage, increasing their likelihood of taking on opposing minions, heroes and towers. 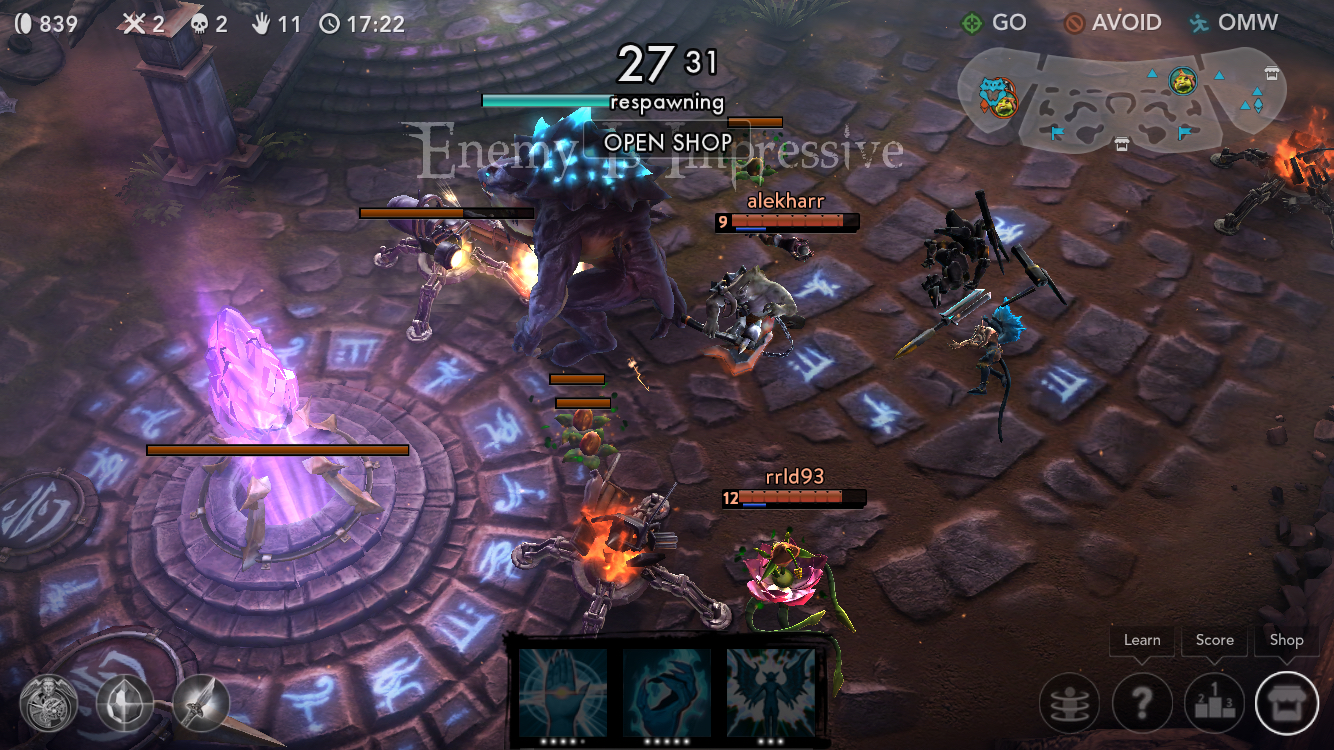 The Gold Mine is another important feature. A powerful Gold Miner constantly mines gold in the middle of the jungle. Kill him and your team earns all the gold he has collected and will continue to earn gold as the game plays on. Both types of mines can also be stolen by the enemy, making for a pretty good back-and-forth battle that takes place in the jungle at the same time as lane battles. The Kraken is the final piece of the puzzle: a powerful enemy replaces the gold miner at the 16 minute mark and requires the entire team to take him out. However, if you do so, you recruit the Kraken to your side and he’ll slowly make his way to the enemy base, taking down opposing turrets, heroes and eventually the Vain itself. He can be stopped, but for most teams, having the Kraken launched against you is a death sentence.

As you can imagine, Vainglory has what it takes to be an incredibly deep game simply from the setup. Its heroes take that depth even further. Heroes are generally classified into the MOBA archetypes, which some designed for laning, others for jungling and others still for utility roles. Heroes are well balanced and while some require more timing and game awareness to play, I found each to be immensely enjoyable in their own way. Vainglory’s shop system also complements its heroes well, with a plethora of items to purchase that improve stats or offer consumables. 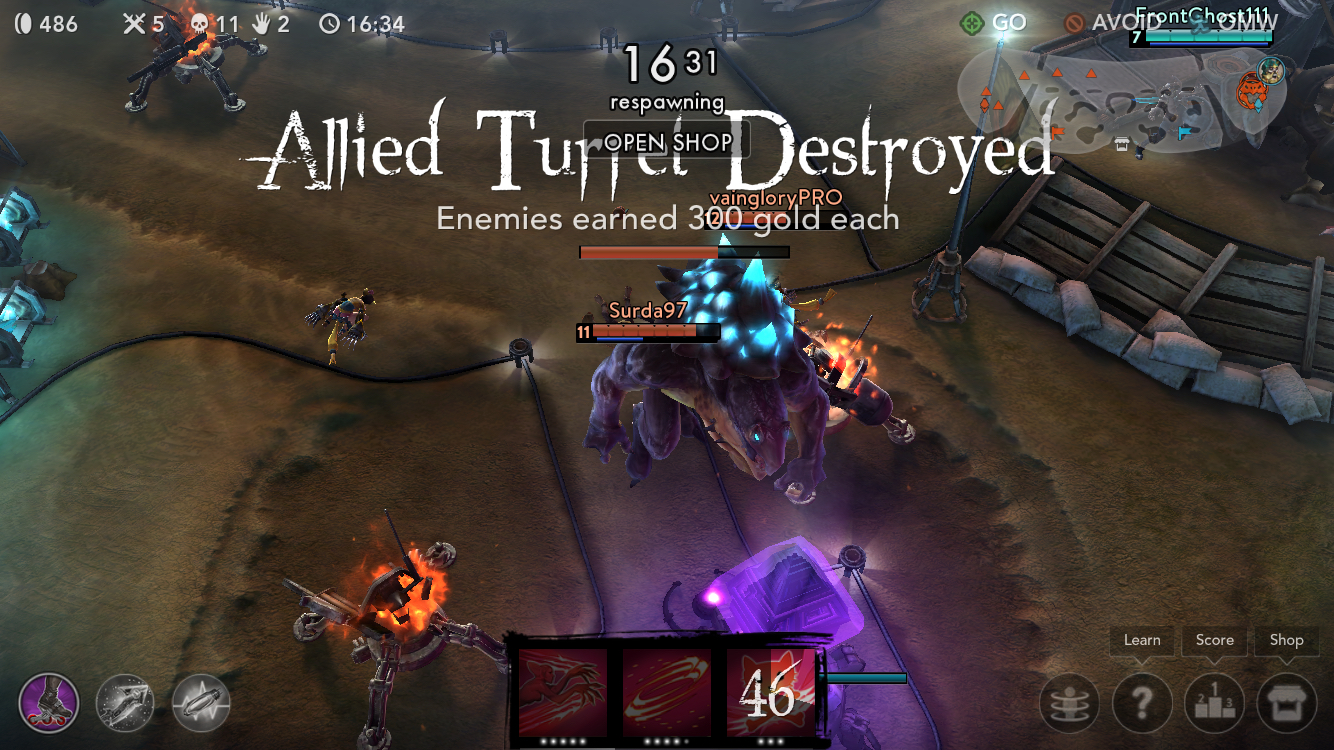 Visually, Vainglory is absolutely beautiful and takes full advantage of Metal (one of the main reasons it was featured in Apple’s keynote). On my iPhone 6, I was met with cool visual effects, highly detailed heroes and backdrops, and no slowdown at all. Admittedly, visuals are probably not on the short list of what makes a great MOBA, but it’s still cool to play a game that looks this great on your iOS device. Relatedly, I never had an issue with latency or freezes in the dozens of matches I’ve played online.

Controls are another important facet for mobile MOBAs and Vainglory executes them near flawlessly. Everything is controlled via taps and menus, power selection, and targeting are all implemented in such a way that I hardly ever had issues with mis-tapping. In fact, I was pretty impressed with how every facet of Vainglory felt tailored to touch controls. Even the in-game ‘Help’ menus, which offer a wealth of information at a glance for your heroes, are implemented well. Speaking of help menus, Vainglory has some of the best tutorial videos I’ve seen yet on an iOS MOBA. 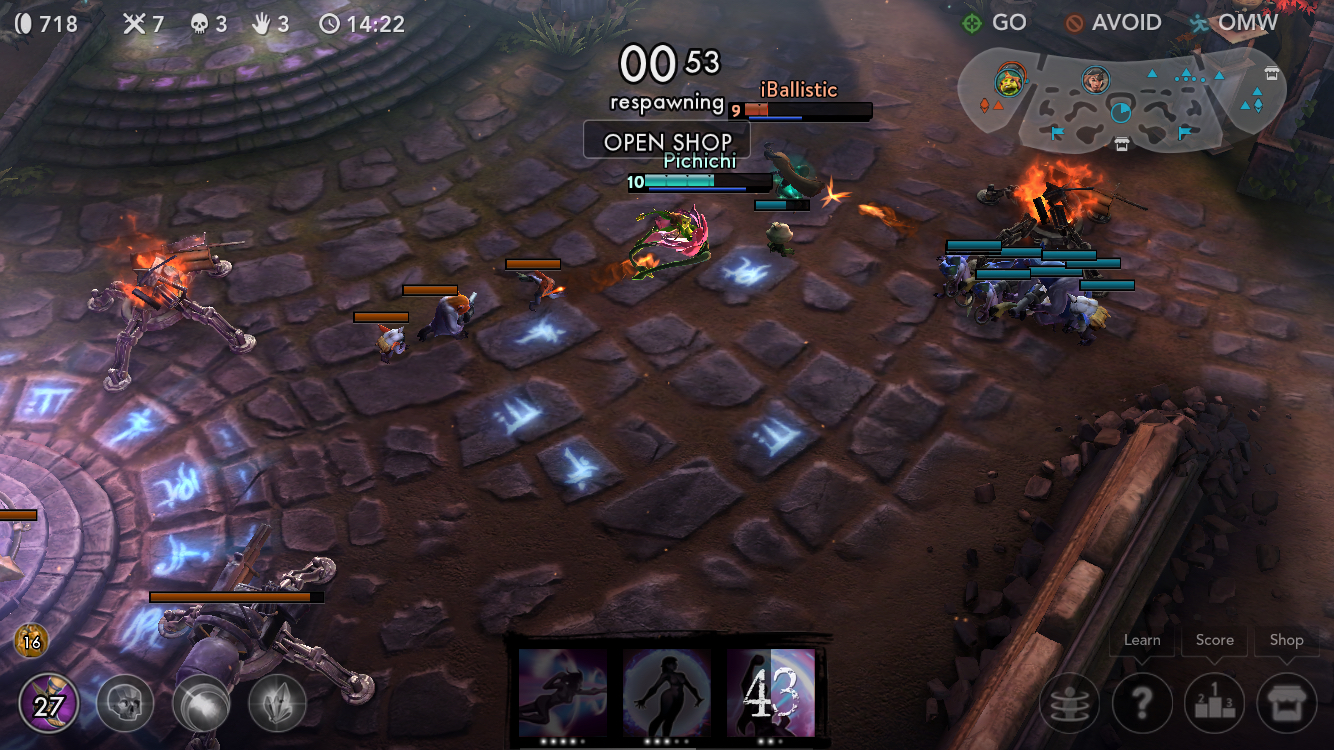 Hero selection itself is where the game’s freemium elements come into play. Heroes are rotated but can be purchased permanently via Glory (the game’s in-game currency which is earned with every battle) or ICE (the premium currency). It’s important to note that I considered no aspect of Vainglory’s freemium facets to be considered pay-to-win. Instead, its monetization favors the more established free-to-play MOBAs and is very fair.

So Vainglory’s parts are all excellent, how well does it play as a whole? Quite awesomely. Battles are relatively lengthy (15-30 minutes) but are a bit less complicated than most desktop MOBAs. However, the great balance of all the heroes, combined with the decent amount of activities to do within the game’s map means there are a variety of ways to aid your team. In fact, the only issue I’ve had so far is with players going AFK during battles. However, Vainglory includes a ‘Karma’ system that rewards players that stick around to the end of the match. The hope is players that don’t leave matches early will eventually only be paired with similar players, minimizing matchmaking with dropouts.

I absolutely love everything that Vainglory has to offer. It’s a full MOBA experience that offers all the strategy and excitement that the genre is known for while modifying and tailoring the core concepts to mobile. Streamlining some facets (like lanes) while retaining hero and power/upgrade depth makes for battles that never feel boring. Vainglory also retains that awesome MOBA feeling of domination when all three team members are in sync. It’s an important aspect which should encourage players to develop a robust friend system for party gameplay.

Seeing how Vainglory is free, there’s really no reason not to check it out. However, I’d go even further and say that it’s probably the best MOBA on iOS and offers both an awesome experience for MOBA veterans while also providing an approachable avenue for novices. Simply put, you owe it to yourself to check out Super Evil Megacorp’s latest masterpiece.