Coming into iOS gaming from a background in consoles, dedicated handhelds, and old computers, my first steps into the already-massive catalog were cautious ones. I stuck to familiar brands and the odd breakthrough that had made waves in the traditional media, such as Game Dev Story ($4.99). One of the first real iOS originals that I fell absolutely in love with was League Of Evil ($2.99), from Ravenous Games. The game will always hold a special place in my heart for hammering it into me that, yes, virtual controls could work marvelously for an action game if they’re handled correctly. These guys had their stuff together, I decided, and I began to follow them closely, anxiously awaiting their next big title. By all accounts, that game looked to be Random Heroes (Free), and I bought it pretty much the second it became available.

Well, it was a big game for Ravenous, and it certainly seemed to perform quite well market-wise. Like many others, though, I felt that the game was missing a certain something. It was a bit too grindy, a bit too safe. There were lots of items and characters to unlock, and that was very cool, but it just wasn’t quite as fun as League Of Evil. The promise of the game was delivered on in slightly better fashion in the follow-up, Random Heroes 2 (Free). The controls were refined and expanded, a new upgrade system was implemented, and there were more collectibles to find in each level. The game felt like it had better balance and, overall, it felt like it wasn’t quite so unsure of itself and what it was trying to do. It’s a good way for a sequel to go, and having checked off that box, Ravenous is following it up with a time-honored gaming tradition. Random Heroes 3 (Free) offers very little of substance over the last game, instead contenting itself with serving up a fresh helping of levels along with some new characters and weapons. It’s a very safe sequel, perhaps a good call after the cold reception of spin-off Random Runners (Free). 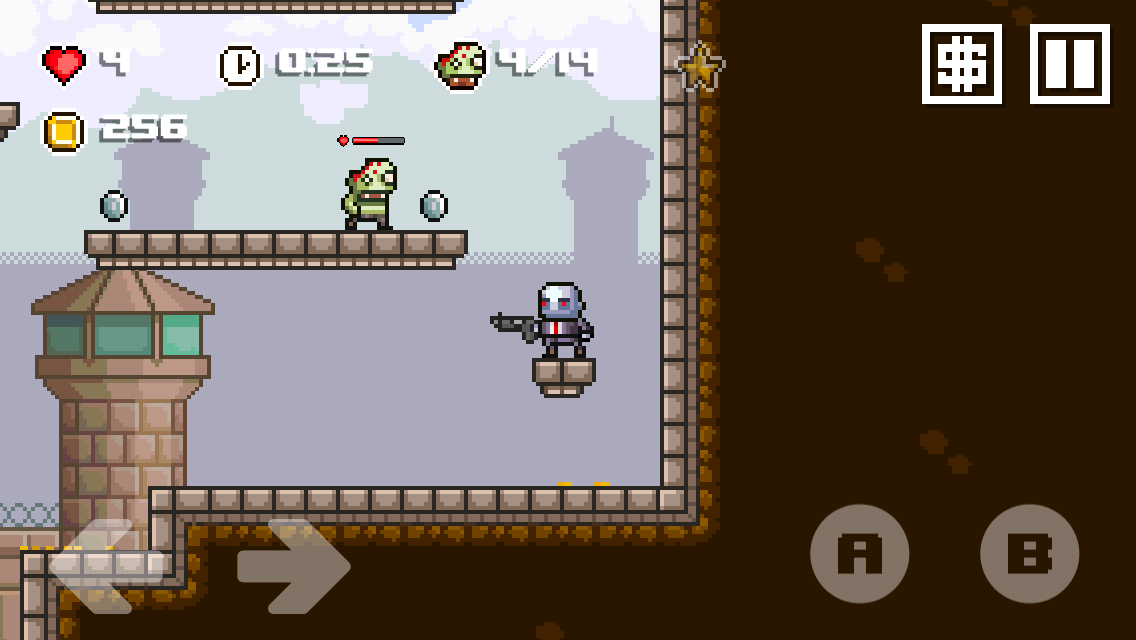 There are a few changes, of course. First of all, the means of getting three stars in each level have been changed. Instead of seeking three stars in addition to a skull in each level, there’s just one hidden star, with the other two stars handed out for defeating all the enemies in a stage and finishing within a certain time. You don’t have to get them all in one run, so it’s pretty easy to get all of the stars if you’re willing to play a stage more than once. Let’s be honest, you’d better be willing to play a stage more than once, this is Random Heroes, after all. I think this is an all-around win, because it relieves the level designers from having to create cubby holes for so many collectibles while simultaneously adding extra goals for the player. Level design has always been a bit of an issue for this series, with the maps frequently being large and sprawling with no compelling reason to explore them fully. At the very least, now, you can chalk it up to hunting down all of the enemies.

The other change ends up being kind of pointless at best, and annoying at worst. Your health now carries over from stage to stage, but the penalty for death is still the same as before: being put back at the beginning of the stage. You now have the option to continue on the spot at the price of one skull, which is a terrible deal you should never take the game up on unless you’ve already bought all of the other things skulls can get you. The persistent health meter feels like an attempt to weave the stages together a little more tightly, but in reality, if you start the next stage with one or two hit points, the wise thing to do is to run into the nearest hazard so that you can start with a fresh life meter. You can try to play it the honest way, I suppose, but there’s no real reason to do so. The end result is basically a little chore you have to do at the beginning of each stage, provided you ended the last one in rough shape. 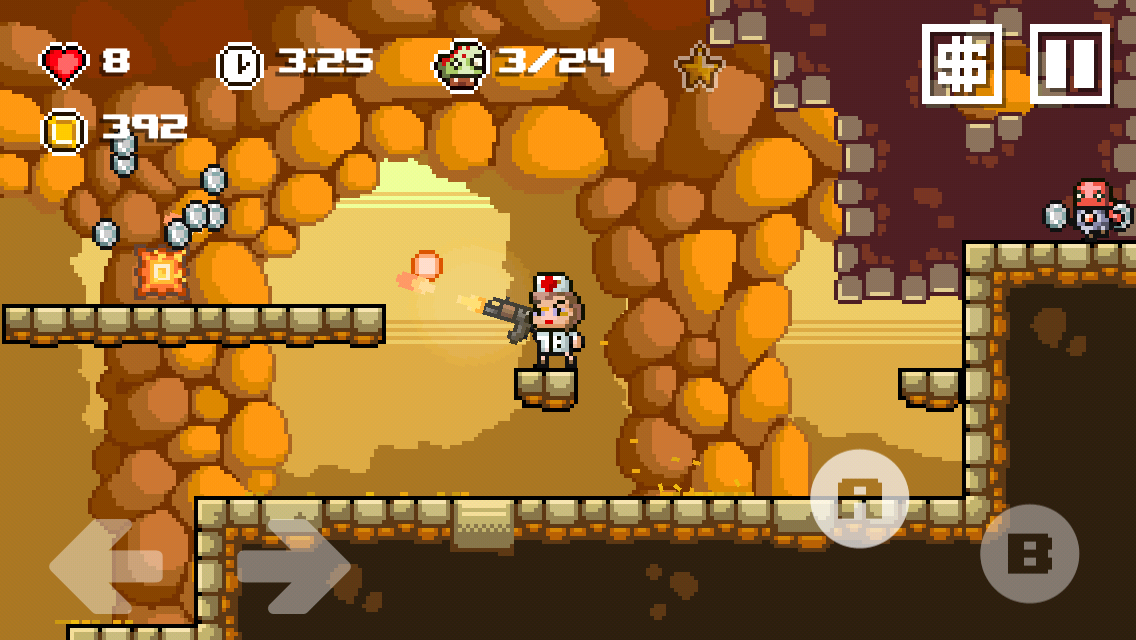 Other than these relatively minor changes, this is essentially a level pack for Random Heroes 2. It still uses the skull system for upgrades, and those are still fairly scarce, with just one per level until you unlock a certain character. You can change regular coins for skulls at a pretty crazy exchange rate, but you’ll probably be hoarding those coins even more than the skulls thanks to the fairly weak rate you’ll earn them compared to the prices on unlockables. There are 75 new levels to play, spanning three different worlds, and each world caps off with a boss fight. The levels are designed similarly to before, so they’re somewhat bigger than they need to be, and largely indistinct. The assortment of enemies are generally similar in behavior to those found in previous games, even if they don’t look exactly the same.

The second installment added a couple of important moves to your arsenal, allow you to angle your gun upwards and hold the button to continue firing while moving backwards. While this game keeps those crucial additions, there aren’t any such revolutions to be found in Random Heroes 3‘s controls. That said, it’s hard to imagine what more needs to be added. The controls are tight, responsive, and are still among the best virtual button controls out there. The UI has been carried over, even keeping some of its quirks such as having to quit out to the main menu to change stages. There are a few changes to accommodate the new star system, with a visible timer and an enemy counter displayed at the top of the screen. It’s pretty easy to guess how much of a stage is left based on that enemy counter, which can be quite handy. 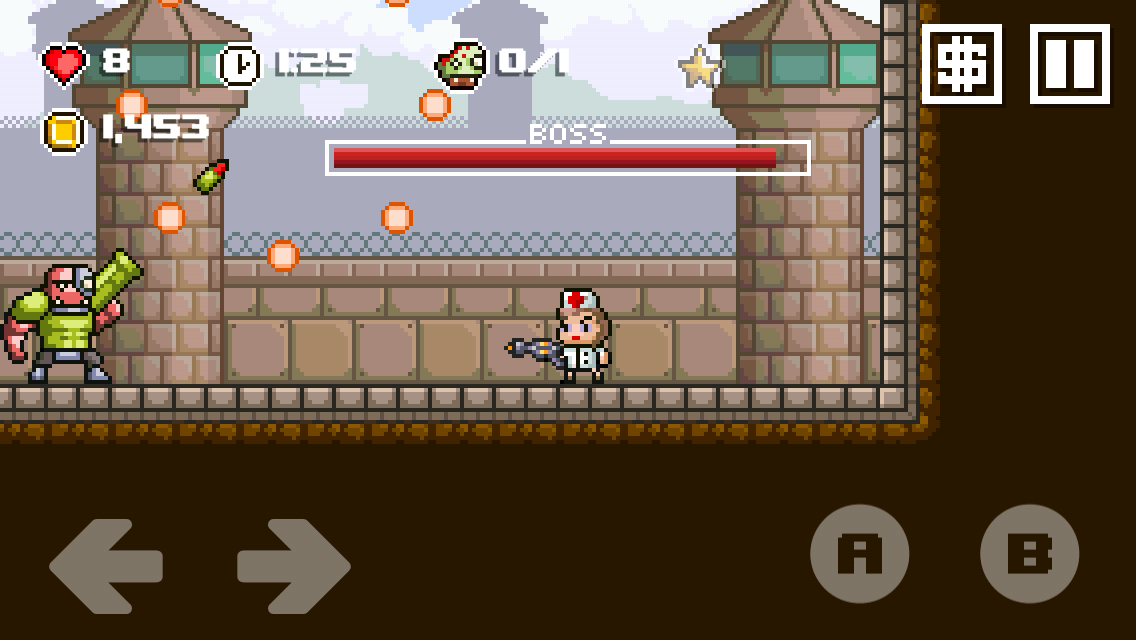 The long and short of it is that this is a very conservative sequel, something that is probably of little surprise to followers of Ravenous Games. Its strengths and flaws are nearly identical to its predecessors, and if there’s ever a Random Heroes 4, I fully expect we’ll be having a similar chat then. Grinding out coins and unlocking the crazy cast and cool arsenal is an okay way to pass the time, but there’s still a certain bland taste to the whole affair that keeps Random Heroes 3 from being anything more exciting than that.