If you’re among the bazillion people desperately queuing up to log into their World of Warcraft server to play the new Warlords of Draenor expansion, listen up- While the Looking For Group and Looking For Raid systems have made it way easier to find groups, there is nothing that sucks more than waiting in queue for an hour (especially if you’re playing a DPS class) only to have the one time you actually get up from your computer to go to the bathroom or get something to drink be when the queue pops. It’s happened to me more times than I could remember, almost like the game knows I went AFK for a minute.

Well, the guys at Gamers Innovation have a clever solution for this problem: Sending a push notification to your iPhone when your queue pops. It’s a little janky, but it works, and that’s all that matters. Here’s what you need to do: 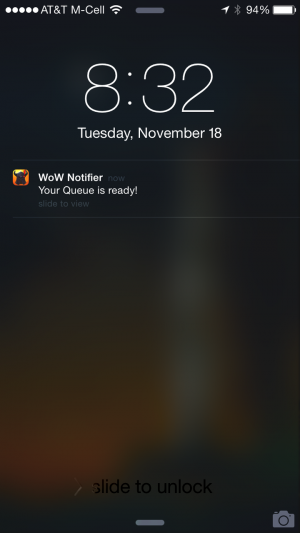 Step 1: Download the WoW Notifier addon, and install it like you would any other WoW addon. Alternatively, if you use one of the many different services out there (Like the Curse Updater) that manages this for you, just install it through that.

Step 2: Download the WoW Notifier Windows companion app (Sorry, Mac users!), unzip it, and run it. You’ll need to create an account (there’s no email verification or anything, just a simple login/password) and then point it to your World of Warcraft screenshots directory. If you don’t have one, just make a directory named “Screenshots" inside of your “World of Warcraft" folder.

Step 3: Grab the WoW Notifier App ($0.99) (or if you’ve got an Android device it’s also available on Google Play) and log in with those same credentials you just created. Be sure to accept the iOS prompts asking if you want push notifications, since that’s the entire point of this. Inside the app, tap the “Devices" button in the bottom right and add the device you’re running it on. If you want to take this a step further and turn WoW Notifier into basically getting a WUPHF, install the app on other iOS devices you’ve got and add those here too.

Step 4: When you’re in queue for something, and you want to be alerted, make sure the WoW Notifier PC application is running and the “Check for notifications" checkbox is checked. If you want to test to make sure everything is working, hit your take screenshot hot key. (If you don’t have one bound, hit escape, go to “Key Bindings," and it’s near the bottom of “Miscellaneous".) If everything is working properly, your phone or tablet should’ve just buzzed.

Now, I mentioned this is a little janky earlier, and here’s why- First off, there’s a lot of links in this chain and many points of potential failure. A WoW update could break the addon, you could forget to keep the PC app running, or something wacky could’ve happened with the iOS app. It’s probably a good idea to triple check everything before trusting it enough to walk away. Additionally, the way the addon that powers the whole thing works is by taking a screenshot when the queue pops, so any screenshot you take while “Check for notifications" is enabled will trigger a push alert. If you’re using something like the Multishot addon, you could get false positives from it’s auto-screenshotting.

Additionally, having all this running will still not keep you from going AFK and getting disconnected if you walk away from your computer for a really long time while in queue. To solve that problem, you could use something like this AutoIt script, but keep in mind you’re doing things like that at your own risk as I’m fairly certain circumventing Blizzard’s auto-AFK system is against the WoW terms of service. Does it seem realistic to think Blizzard is actively looking to ban people for automatically jumping a few times during a dungeon queue? Probably not, but it’s still worth mentioning.

Anyway, once you get this all set up it’s hard to imagine playing World of Warcraft without it. Blizzard has a track record of looking at cool things the community has done and just integrating it directly into World of Warcraft itself, so it’d be really awesome to think that one day the World of Warcraft Mobile Armory (Free) could potentially have similar functionality integrated directly into the game instead of needing three admittedly pretty clumsy links in a chain with your fingers crossed that they all are working.