There still aren’t enough mining games out there in the world. Despite the resurgence of the genre on the mobile platform and recent mainstream hits like Steamworld Dig, I could probably play a new mining game every week without getting bored. There’s something about digging down into the great unknown that fills a void many other titles can’t, and Puzzle to the Center of the Earth (Free) manages to keep the core facets of the genre intact, while adding in some unique puzzle elements.

After a short tutorial, the game sets you out to dig your way under your house to the center of the Earth in a level-based system, which makes it perfect for bite-sized sessions. It’s incredibly easy to get around — sliding the bottom of the screen will move you left and right, and sliding it upwards will allow you to jump up platforms. Everything else is controlled by precise swipes on colored blocks littered about the screen. 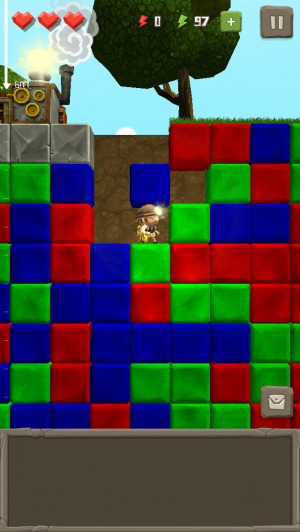 Said blocks essentially function as a match-three minigame, allowing you to clear a path down into the abyss. The object is to clear a path that can not only get you to your objective, but one that also doesn’t trap you into an area where matches can no longer be made. As a result, each match could be your last, and you actually have to think about where you end up.

Generally you need to match up blocks of the same color, but you can also use advanced strategies like dropping blocks downwards to escape out of pits. You can also only make a certain amount of moves per board, so you can’t go willy-nilly like it was an action game. As a result, it turns into more of a methodical experience, and I found it to be quite the delight since success wasn’t inherently guaranteed by way of brute force.

The game is free, but it really doesn’t attempt to over-monetize you outside of single-use items that aren’t needed and an energy element that recharges your lives, which can be eliminated entirely with $4.99. Not only is the game playable without it, but the price is more than adequate for the amount of content you get. The reasoning behind this is because the game is designed to inherently reward skill.  Rather than feel like Center to the Earth is scamming you by presenting ridiculously hard puzzles to force you to buy energy, once you really get the rhythm down you can overcome most of the obstacles in the game with raw skill.

Then there’s the other side of the spectrum — you can’t just pay to win — you still need to master every facet of the game before you really succeed in the end. At the time of this writing there are 80 levels to conquer, which will take a fairly long time to finish. There are also a lot of extras like additional characters and items.

Mining and Match-Three are a match made in heaven apparently, as Puzzle to the Center of the Earth has demonstrated. If you’re a fan of digging down into the depths and testing your mind with clever puzzles, this is a no-brainer.