Radiangames – perhaps the most prolific creator of dual-stick shooters on the App Store – has made their biggest one yet with their latest release Inferno 2 ($2.99). Seriously, Inferno 2 is massive: 80 levels full of mazes, tens of thousands of enemies to take down, four different weapons to use, four different missiles (inspired by the special weapons of JoyJoy (Free)), a level-up system, and loads of upgrades to use. This game is vast, and it’s a great pickup for fans of Radiangames’ previous work, or anyone looking for an action game to sink a few hours into.

Inferno 2 doesn’t really surprise in any way. The game’s not dissimilar from the original Inferno+ ($0.99) in that it’s a level-based dual-stick shooter. Levels are about navigating waves of enemies, collecting keys to open up locks, finding secret passages to get more credits, collecting experience to upgrade weapons and missiles, and so on. There’s the occasional survival mission, boss battle, and core destroyer level to mix things up, too. But considering that Radiangames has made a bunch of these games before – heck, Powerpuff Girls: Defenders of Townsville ($3.99) was pretty much a dual-stick shooter dressed up as a Metroidvania game – and it uses that familiar abstract art style, it’s hard to say this game contains any surprises. It’s just 80 levels of action. 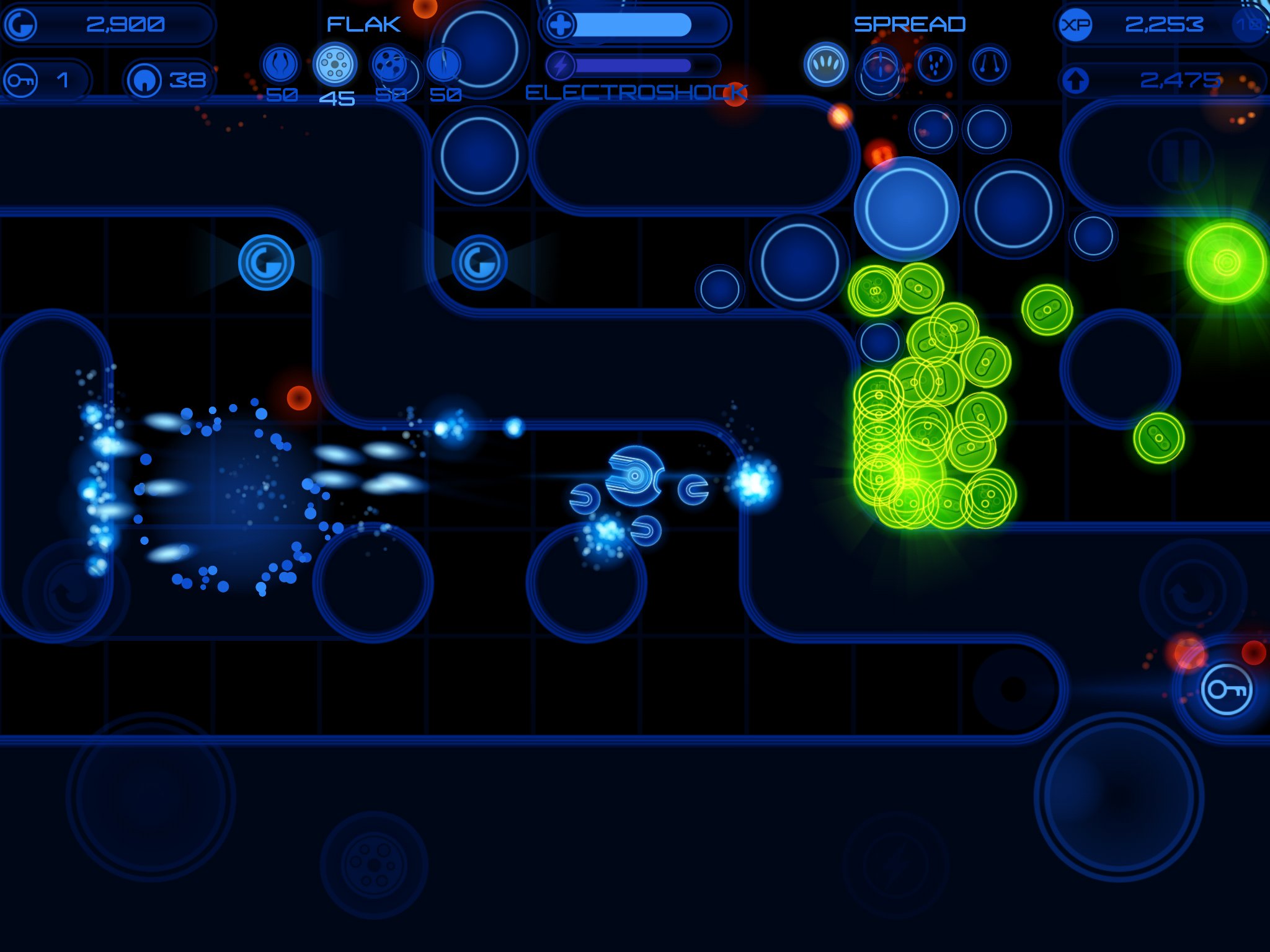 Inferno 2‘s got 2 different weapons systems to use and switch between, and I think it could certainly be simplified. I’d like the option to just have, say, one or two weapons and missiles to swap between, as that’s what I typically used: for weapons, I used the spread and the reflex shots. For missiles, I used the phantom missiles as they’re just extremely handy, and the flak shots as they seemed to do the most damage. Having to swap between four different types of each seems excessive.

Control-wise, the different switching of weapons with the virtual controls leads to some confusion, as it’s easy to get the virtual buttons confused as firing missiles is on the left side of the screen – making it so that you can’t move while firing them, by design – and switching weapons is on the right, with the power-up discharge there. Plus with having four weapons and missiles to select from, it gets rather confusing in the heat of battle. Thankfully, there is MFi gamepad support.

While I do think Inferno 2 is a rather familiar game, I find it difficult to put down, too. It was the first game in a while where I played it for a long time, and wondered what time it was afterward. The upgrade system is comprehensive and strategic, and there’s no IAP. And the game may be all action all the time, but Radiangames knows how to make an entertaining dual-stick shooter, and there’s any number of exciting scenarios here. And the game’s secret paths and breakable walls are always exciting to discover, as is finding ways to beat levels without using all the keys given in them.

And really, I just couldn’t stop playing Inferno 2 once I started. I have a tendency to play games in a start-and-stop fashion, to try and extend out the experience. This was the game where I said no, I want to keep at this, I want to see this through right now. And that speaks volumes above any critiques I may have. I wanted to play this game, I couldn’t stop playing this game. This is one of the best dual-stick shooters you can buy. And as one of the few with MFi support, that’s just an added bonus. Check it out.