Developer Radiangames has released a few cool puzzle games recently, but it’s been a while since Radiangames last visited the shooting genre on iOS. Since their twin-stick shooters are among the best available on the App Store, it’s a more than welcome return. Of course, JoyJoy (Free) represents a return in more than one way, since it’s actually a revamped version of one of the developer’s oldest games. You would think that would put the game in a hard position, launching among its successors and all, but it does enough to differentiate itself to make it worth owning for any fan of the genre.

Like many people, my first few months of Xbox 360 ownership somewhat surprisingly belonged to Geometry Wars on XBLA. It’s a terrific game that almost certainly deserves the credit for dragging the dormant twin-stick shooting genre back into the limelight. When I got my first iPhone, I did what I imagine many of you did and went right for Geometry Wars Touch, hoping to get an on-the-go version. Well, that version doesn’t even work properly anymore, but even when it did, it didn’t quite get the feeling right. Luckily, many other developers have tried their hand at the genre, and one of the best ones that people referred me to was Ballistic SE ($2.99). That was my first experience with Radiangames, and I haven’t missed even one of their titles since. 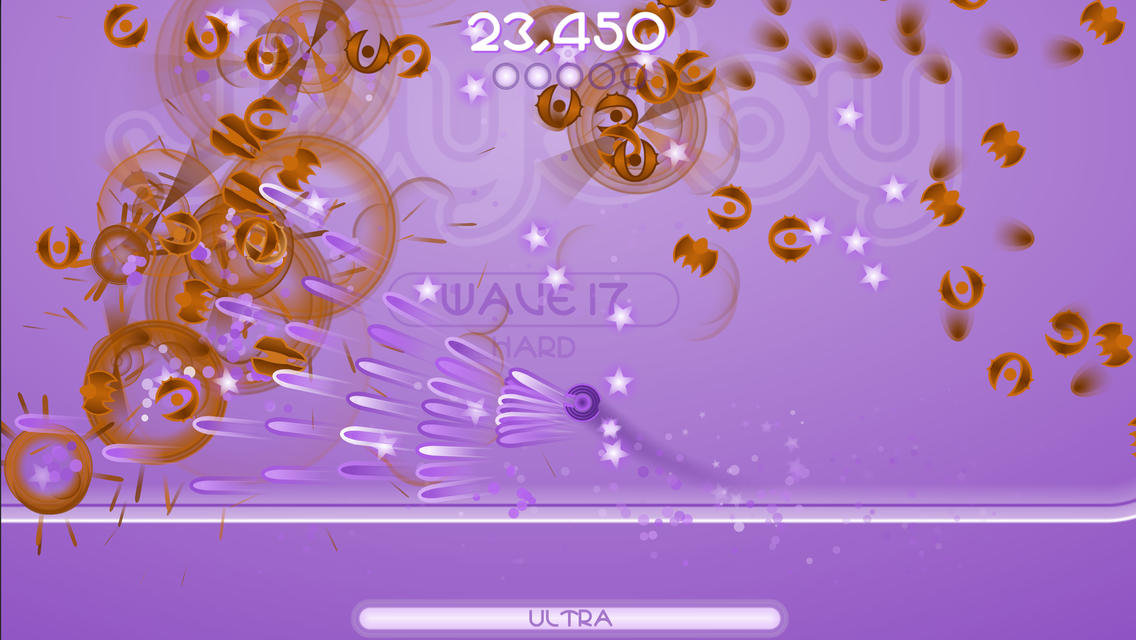 At first glance, JoyJoy seems a little bit too familiar. The game modes offered are the same as those in Ballistic, the basic controls feel the same, and you’re still just trying to survive in a rectangular arena through wave after wave of foes. The main colors used are different, but the visual style and audio are consistent with previous games from the developer. Truthfully, I don’t think it’s unfair to say that JoyJoy has a great deal of overlap with Ballistic, and that the average person may not care about or appreciate what it does differently. If you feel like you’re the type of gamer who only ever needs one twin-stick shooter, JoyJoy isn’t going to get you to break that rule.

For those a little more into the genre, though, this game has quite a lot to offer. Its instantly-comfortable controls and basic gameplay flow are more of a positive than a negative, since they allow you to get right into the nitty-gritty of the game’s nuances. There are a lot of attractive qualities for a twin-stick shooter to possess, but I feel that one of the most important things is encouraging the player to leave the walls, so to speak. When playing an arena-based twin-stick shooter, the natural instinct is to hug the walls and just do laps since it’s usually a very good strategy that minimizes risk. It also gets dreadfully boring after a while, whereas escaping a tense situation in the middle of the crowd and escaping back to the relative safety of the wall is extremely exciting. 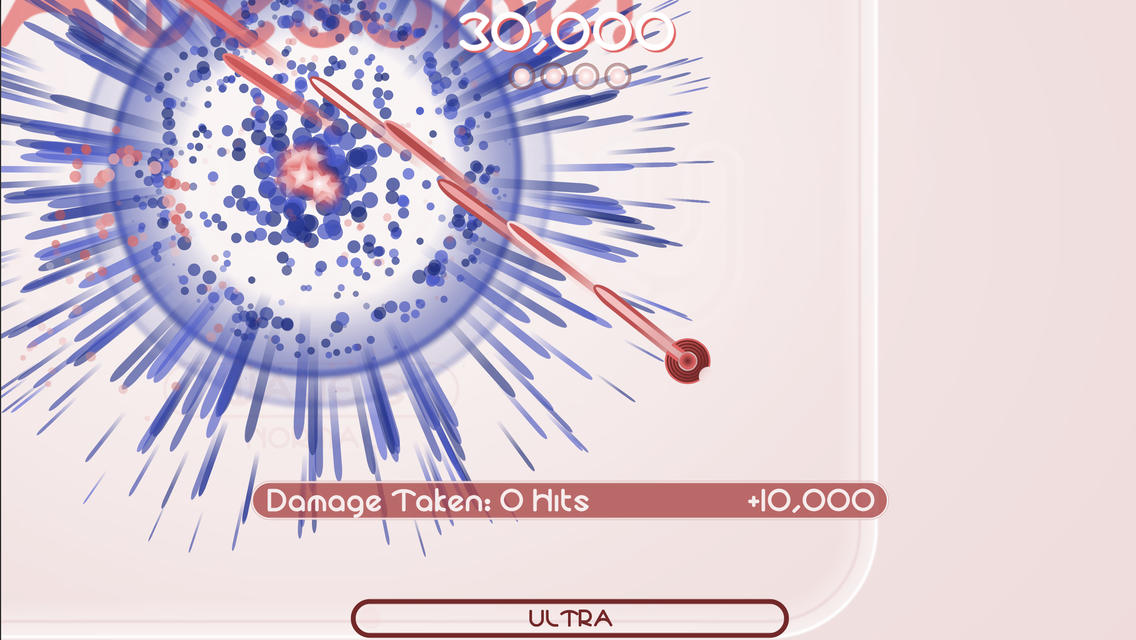 Ballistic SE encouraged this behavior by use of bombs you could set off to take out a wide area of enemies. It was a pretty good idea, but when things were hairy, it was a bit too easy to pass on the temptation and just try to stick it out from a position of safety. JoyJoy, on the other hand, has a twofold strategy for getting you away from those walls. First, instead of allowing you to allocate a point to a new ability or skill every set number of waves as Ballistic did, JoyJoy gives you power-ups by way of collectible icons left behind by certain enemies. These power-ups include things like entirely new weapons, increased hit points, and so on, and if you’re hanging near the wall firing inward, they’re probably going to be dropped towards the center area. Since they clearly state on the icon what you’ll get by picking them up, they’re extremely hard to resist.

The second way the game gets you out into the open involves the powerful Ultra attack. This super powerful attack will fire all around you, and is most effective when you’re surrounded. You can only use it if you have energy in your Ultra meter, which is powered up by collecting the little stars left behind by defeated enemies. Once again, if you’re usually a wall-hugger, those stars are going to by and large be left in the middle of the play area. They fade out relatively quickly, so if you want to scoop them up, you’ll more than likely have to take the risk of charging into a pack of enemies. Though the power-ups are more enticing than the stars, the combination of the two usually is enough to convince you to take a trip to the woodshed and back. 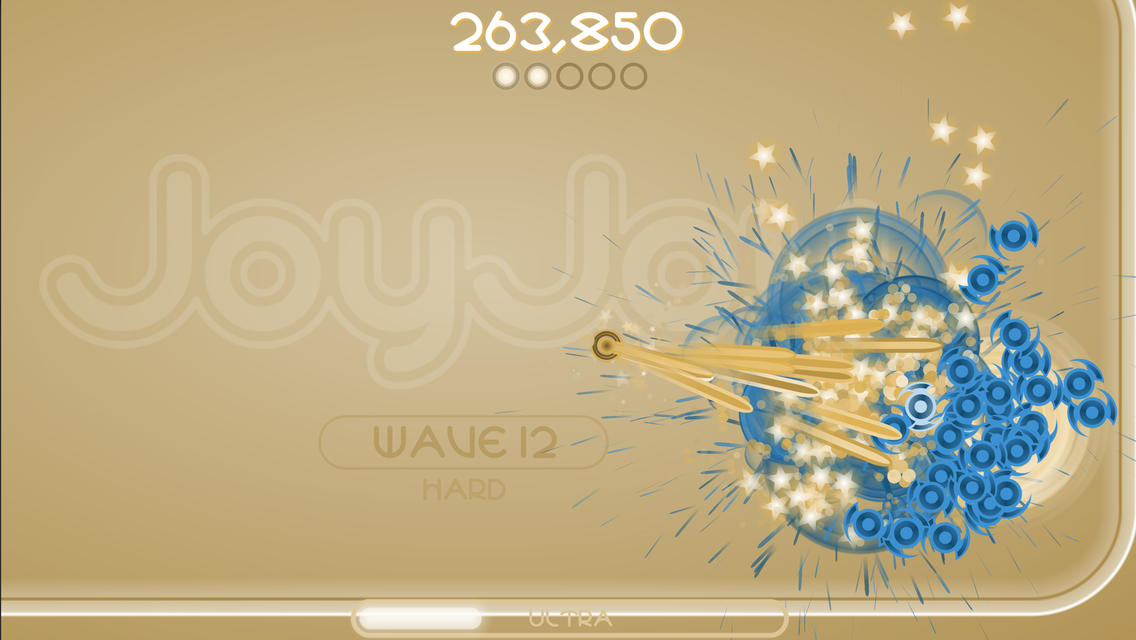 The progression system is a bit more linear in this game compared to Ballistic. You don’t get to choose which power-up you’d like next, but are instead left to the mercy of the game. I’m pretty sure certain power-ups are set to drop in certain stages, however, so two players at the same wave should have more or less the same power. What the game lacks in choices for developing your ship, it more than makes up for in moment-to-moment decisions. You’ll eventually find six different weapons, and rather than have one replace the other, you’re able to switch between all of the weapons you’ve collected at your leisure with the press of a button. Certain weapons are more effective for dealing with particular types of enemies, so even if you have a favorite, you’ll still find value in checking out the others.

The enemies are preset for each wave, but where they will appear varies from game-to-game, so while you might have a good idea of when to switch to a certain weapon, you still need to be on your toes because you can’t guess where the baddies will be popping in. All in all, there are 24 waves, which is a bit light compared to Ballistic‘s 100+. JoyJoy makes up for that by giving you a whopping seven difficulty settings to play on, with the latter two unlockable and providing a very different play experience. The game is a decent workout even on normal difficulty, so there should be plenty of shooting action here for almost anyone. As in Ballistic, you get checkpoints after a certain number of waves are cleared, allowing you to start from there in any subsequent games, so you don’t have to knock out the whole game in one sitting. In addition to the wave mode, there’s also a challenge mode that provides you with six different situations to battle through. Your weapons and power-ups are fixed for each one, along with the types of enemies you’ll face.

The controls work quite well, with a virtual stick for movement and firing, along with buttons to switch weapons and activate your Ultra attack. Interestingly, the button for your Ultra is located just to the right of your movement stick, which means you actually have to stop moving to fire it off. Even if you use two fingers, you can’t do both at once, which is a cool design choice that ups the risk of using your super attack. If you take your finger off the firing stick, the game will auto-fire somewhat intelligently, so you’re covered when you need to give your thumb a quick rest. There’s also support for MFi controllers, though I found it was actually a bit harder to play this way. It felt a little less responsive than the touchscreen, somehow.

Wrap this whole package up and tie it with the usual Radiangames presentation, including slick visual design, cool music, and good Game Center implementation, and you’ve got another winning choice in the top-down shooter genre. I especially enjoy the variety that comes from having a wide variety of weapons to choose from, since not many games in this genre use that kind of system. I don’t think I would necessarily recommend it ahead of Ballistic SE, but if you’ve got that game and are looking for another helping with a bit of a twist, JoyJoy will almost certainly deliver what it says on the tin.