Side-scrolling games where you ride through a course performing tricks and stunts seem to be all the rage these days, mostly thanks to the sudden popularity the Trials series found several years ago. That rise coincided nicely with the fall of 3D open world trick games like the Tony Hawk’s Pro Skater series, ensuring that trick-crazy gamers wouldn’t go hungry. Unfortunately, Trials took its sweet time coming to mobiles, just arriving in 2014 as Trials Frontier (Free). One thing I’ve learned about the App Store is that if you leave a void, someone will fill it, and one of the more fun attempts to do so came in the form of 2012’s Pumped BMX ($1.99), from developer Yeah Us. The game was a weird hybrid of Tiny Wings ($1.99) and Trials, focusing mostly on performing stunts on the way to clearing each stage.

Well, we’ve got a sequel now in the form of Pumped BMX 2 ($1.99), and it makes a lot of refinements without too much in the way of significant changes. You’re still riding your BMX bike through short courses, trying to clear stage challenges and make it to the end without wiping out. The basic control mechanism borrowed from Tiny Wings remains intact. This time around, there are 50 levels, which is a few more than the first game, and 500 challenges to clear, which is a whole lot more than before. Rather than unlock each type of challenge across all stages one at a time, in this game, each stage has its challenges grouped into difficulty tiers. You unlock the next one by clearing all of the challenges in the current difficulty tier. The stages are grouped into different worlds, and you need to clear a certain number of challenges in total to open up each of them. 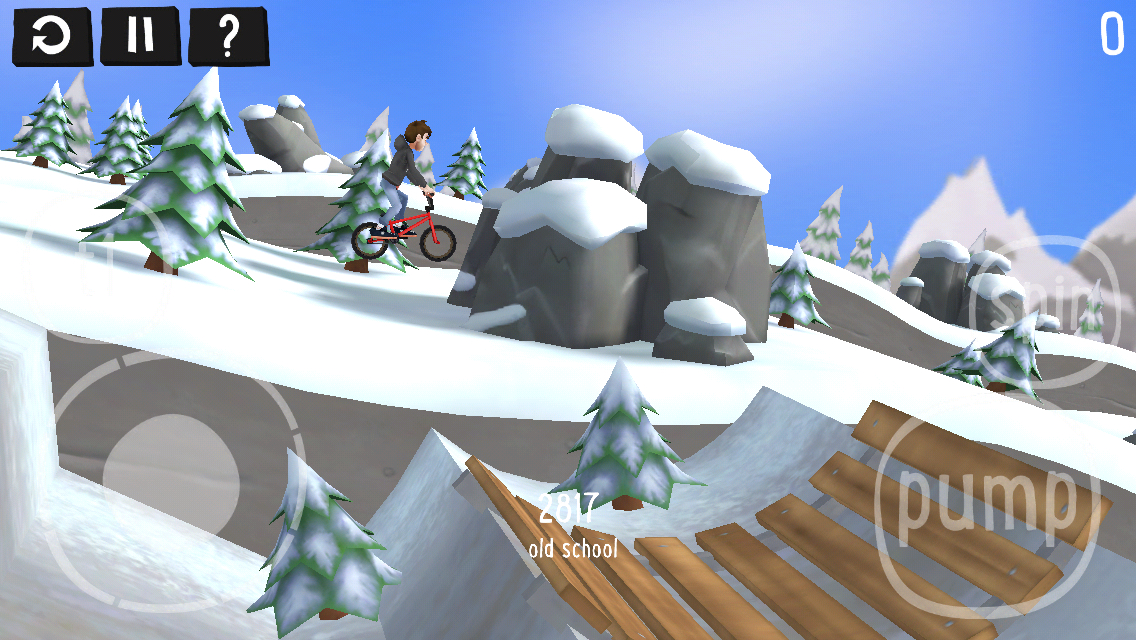 This setup works a lot better, since you can actually clear all four challenges in each difficulty bracket with a single play of the stage, provided you’re good enough. This encourages you to push yourself a little bit more on each run, which usually results in more hilarity or fantastic seat-of-your-pants victories. The challenges themselves follow the template set out in the first game. You’ll have one for clearing the stage, another for setting a certain score, one more for performing a particular trick, and finally, one for performing a high-scoring trick of any type. Each step up in difficulty only increases the numbers and complexity of the tricks. The highest difficulty challenges can be maddeningly difficult at times, but you can move through the game well enough even if you can’t hit all of them.

The types of tricks you can pull off have increased in number and complexity thanks to the addition of a spin button and second-tier tricks. The spin button can be combined with any other trick to boost its score, and if you throw a flip in there, you’ll really be raking it in. Second-tier tricks can be toggled via a button above the trick-stick, changing your tricks to more difficult, higher-scoring ones. Moving spins to their own button opens up more room for tricks, so you can now perform up to 16 different tricks in combination with spins and flips. You can also do manuals and grinds on certain surfaces. It’s a little complicated at times, and you have to be able to manage tilt controls for flips and landings, but it gives you a great deal more freedom than the first game to customize your runs. 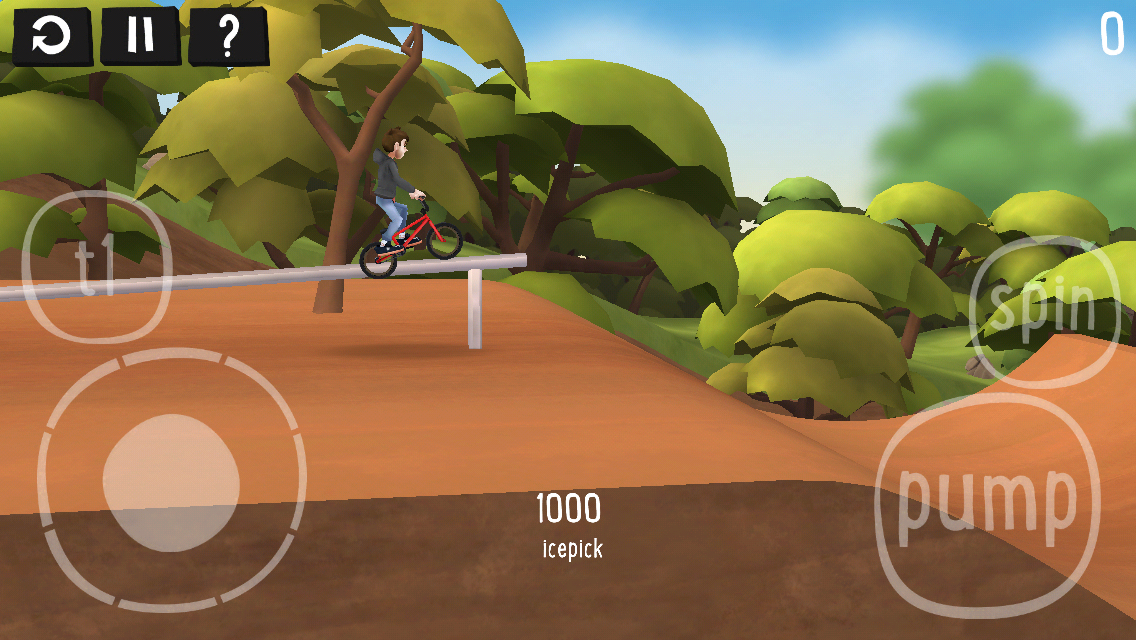 I guess this is as good a time as any to go over the controls. Your character will propel himself forward a little bit at the beginning of the stage, but it’s up to you to keep the momentum by pushing the pump button while going down hills or at the right time while descending. Tilting left or right controls your character’s angle. Tricks are done through a combination of the spin button, located above the pump button, and the trick stick, an eight-way virtual stick on the left side of the screen. Flicking in any direction will produce a different trick, and if you hold it in a particular direction, you’ll do a more extreme version of that trick. Above the trick stick is a button that lets you switch between trick tiers. It’s a lot to keep track of, but that’s usually the case in games like this. If you spend a little time with it, you should be able to handle yourself. All of the buttons are well-placed and responsive, which is vital with so many actions to consider at once.

The most obvious change in Pumped BMX 2 is in the production values. While the first game used simple, clean 2D assets, the sequel goes for a far more sophisticated 3D look. With the freedom 3D offers, you can now choose different looks and bikes for your character, though the character himself remains the same generic dude. The courses benefit the most from this graphical shift. While they aren’t gorgeous specimens, they are nice and colorful, with foreground elements standing out nicely from the backgrounds. The flat look of the first game sometimes made it hard to distinguish those things, so the added depth is a real boon here. The music is along the same lines as the first game, relaxing stuff that is probably in there to keep you from rage-quitting on particular challenges. The Game Center support is great, with leaderboards for each stage and a set of insane achievements that will have you twisting your brain and fingers into pretzels. They’ve even left out the IAPs this time around, so you get all the levels with the initial purchase price.

Pumped BMX 2 expands on the original game in every way without losing the core of what made the first game fun. It doesn’t shake things up all that much, and if the series continues, I’d like to see a few unique challenges added to the mix, but for a first sequel, I think this game rides the lines well between keeping things safe and pushing forward. If you enjoyed the first game, you’ll definitely want to pick this one up. If you’re new to the series, you can jump in right here, because this game offers everything the first one did, but does it all better and heaps a few scoops on top. Make sure to swing by the thread in our forums for more impressions and to make some friends to compete with.