Let me begin this review by lighting the “Experience Game" signal, just so that we’re starting off with clarity. I’ve talked before about the distinction between games focused on mechanics and what I usually refer to as experience games, particularly in my review of Monument Valley ($3.99). As you would probably expect from Minority Media, the developers behind PlayStation 3 game Papo & Yo, their new game fits firmly into the latter category. In Spirits Of Spring ($1.99), the mechanics exist only to serve the experience, so if you’re mostly into mastering play mechanics, I guess this review was a short read for you. There are no fail states in this game, it’s relatively brief in run-time, and you’re never asked to do anything terribly difficult with the few abilities you have at your disposal. Those who enjoy games that focus on delivering an experience, on the other hand, will find something more than worth your time and money. It’s a bittersweet exploration of bullying, from both sides of the fence, and though its hand is perhaps a little too heavy at times, I still found it to be a very precious journey. 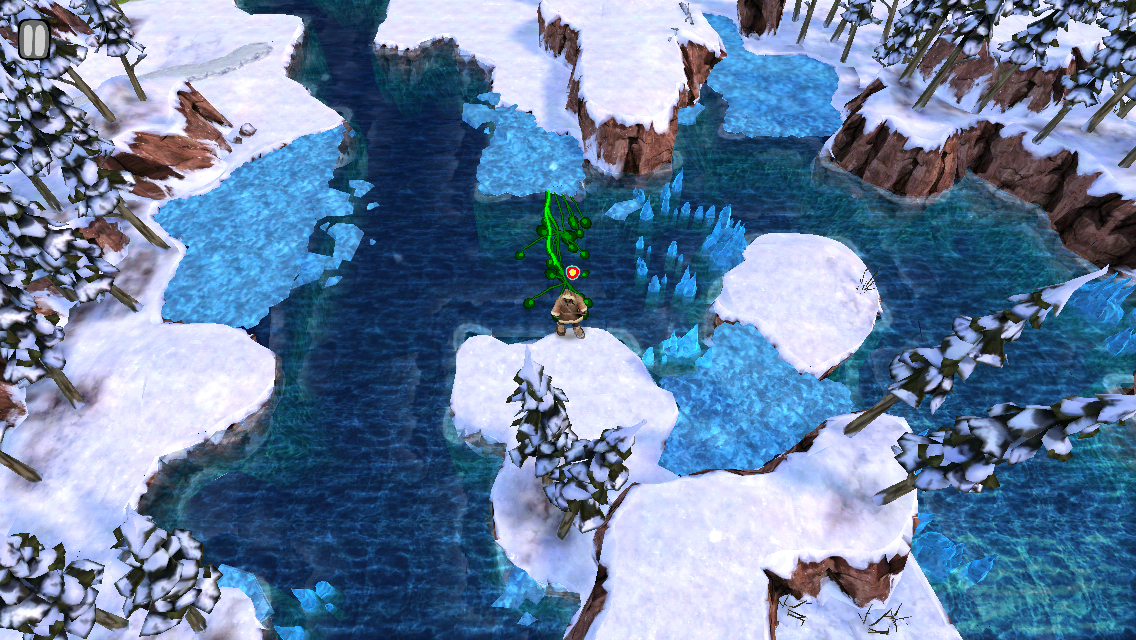 The game follows the story of Chiwatin and his friends Rabbit and Bear. Chiwatin has the unique power to control the spirits of spring, who help stave away winter through guardian Spirit Trees. As they’re out walking one day together, a band of vicious crows begins attacking Chiwatin and his friends, killing the Spirit Trees and bringing on a permanent winter. Chiwatin, with the help of his friends, has to bring back spring and put a stop to the menace of the crows. The story is told by an unseen narrator, who comments occasionally while you play. The story is very much in the style of traditional native folk stories, and it’s handled very respectfully.

Of course, that’s just the surface of the story. What this game is really interested in talking about is bullying, a topic that likely all too many of us have personal experiences with on one side or the other. How should a victim handle a bully? How far should they go? What is the best solution? Spirits Of Spring doesn’t give any clearly correct answers, only suggestions, but it does knock down a few of the worst methods. I don’t want to reveal too much of the plot, since it’s a relatively short game, and the story really ought to be experienced naturally. In the end, there is at least some closure, as much as there can be, and some strong words that should resonate for anyone who was bullied or was a bully themselves. It’s a very emotional story, but you really have to stick with it to the very end to get the proper impact. 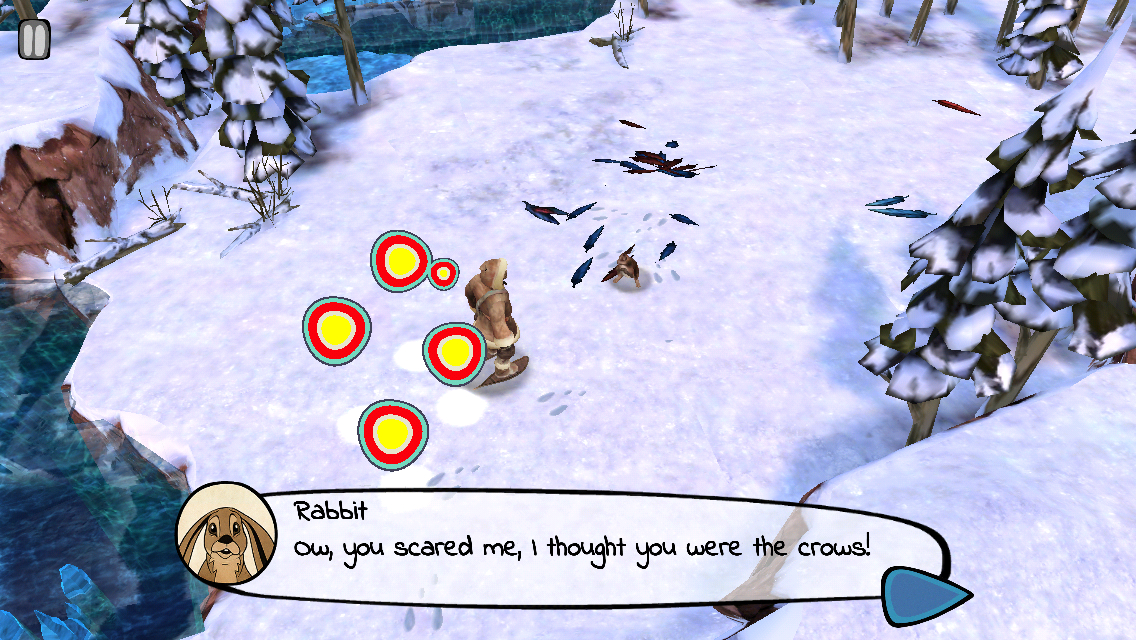 The gameplay is mostly about navigating from point A to point B, typically by using Chiwatin’s ability to create a bridge over water using spirits. For every spirit you collect, you can stretch out a bridge by one space. You can also use spirits to revive trees, which will melt the surrounding ice and open up new paths. Generally speaking, you need to collect all of the nearby spirits, use them to reach a new area, and repeat. The game is linear enough that it’s hard to get lost, except perhaps for one section near the end where Chiwatin has access to powers that give him more freedom. There are a few parts where you have to take control of Rabbit or Bear to make use of their special abilities. In the case of Rabbit, you can use rabbit holes to travel around to areas that Chiwatin can’t ordinarily reach, and as for Bear, she can swim through the icy water and push up against special trees to release spirits. There are a few other surprises throughout the game, but I think it’s best to leave them that way.

These abilities could be used to create some interesting puzzles, but by and large, they aren’t. It’s not the point, really. You aren’t meant to ever get stuck because you need to be able to experience the whole game for the story to work. In looking at this developer’s most well-known game, Papo & Yo, I suppose I’ll be thankful for simple mechanics over frustrating ones, but I can’t help but feel there was a missed opportunity in Spirits Of Spring to serve the gameplay more without sacrificing anything from the story. It ends up being somewhat troublesome anyway, thanks to the fussy controls. To move Chiwatin, you have to touch and hold where you want him to go, but that means your finger is blocking your view fairly often. He sometimes slips and falls down, which is part of his character, and it happens often enough that it might annoy you, but I can’t help but think it’s meant to. 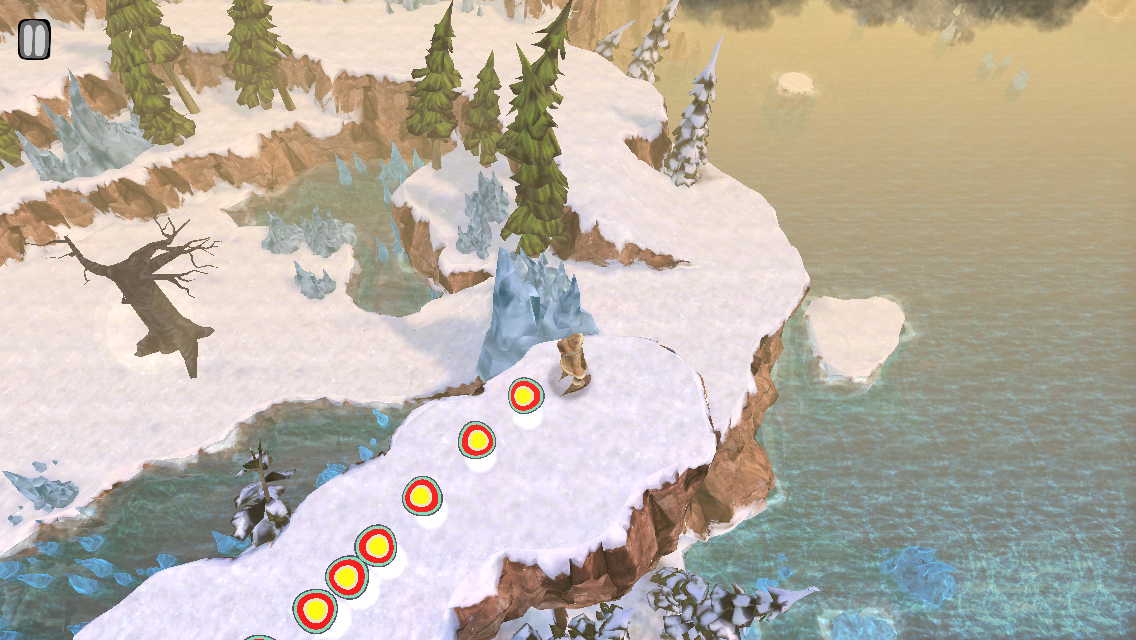 Using the spirits for anything requires you to touch Chiwatin and stretch the spirits out to their target, but many actions require more precision than you would expect. Trying to take control of Rabbit can be extremely frustrating since you have to reach the spirit out to a particular point on him without going too far. This command also makes it frustrating when you want to move Chiwatin in tight spaces. Using Rabbit’s holes also requires a bit of work, since it’s not enough to merely move Rabbit over them. This is all a bit irritating, but it’s not as bad as it could be since, as I mentioned, the game never really asks all that much of you and there’s no way to lose. The most difficult part of the game involves cornering a rabbit, and even that’s less a matter of twitch skills and more about using your brain. Other than that, you’re free to stumble and fumble your way through the game without much loss.

Spirits Of Spring is a very beautiful game, with environments patterned after Northern Canada, which translates out to a lot of trees, snow, and trees covered with snow. The game has a few interesting weather effects up its sleeve, and it always looks nice when winter gives way to spring after reviving a Spirit Tree. The cost of all of that is that it will suck your battery like crazy, but on the positive side, it turns your device into a great hand-warmer to survive permanent winter with. The audio design in the game is especially impressive, with dynamic music that changes based on your actions and some excellent voice acting by the narrator. The game runs about two hours long with little reason to replay aside from experiencing the story again, which you might want to do after the ending.

I suppose it depends on what you’re looking for out of the game. As a game in the traditional sense, Spirits Of Spring is very linear, has control issues, and lacks any sense of challenge in its mechanics. Nevertheless, I think it’s a game you should play, simply because it does such a good job of presenting its ideas in a way that makes you feel like you have a personal stake in the outcome. The game has something to say, and it says it in a way that leaves you thinking, and maybe reflecting a bit, when it’s all over with. I don’t know if I want to play Spirits Of Spring again because it put me through the wringer a little bit, but I’m exceptionally happy that I played it once.