Cookie Clicker was one of my favorite games of 2013. Your objective was simple — make more cookies. At first, you needed to click the screen occasionally to get more cookies. Eventually, you start accumulating them on your own and you don’t really even need to click. Slowly but surely it evolves into a giant meta-game of cookie management and borders on a full-on simulation. It’s the simplicity that makes it worth playing. Why am I mentioning all of this? Because Poor Gladiator (Free) for iOS has a similar scheme, and is a great way to relax on the go. 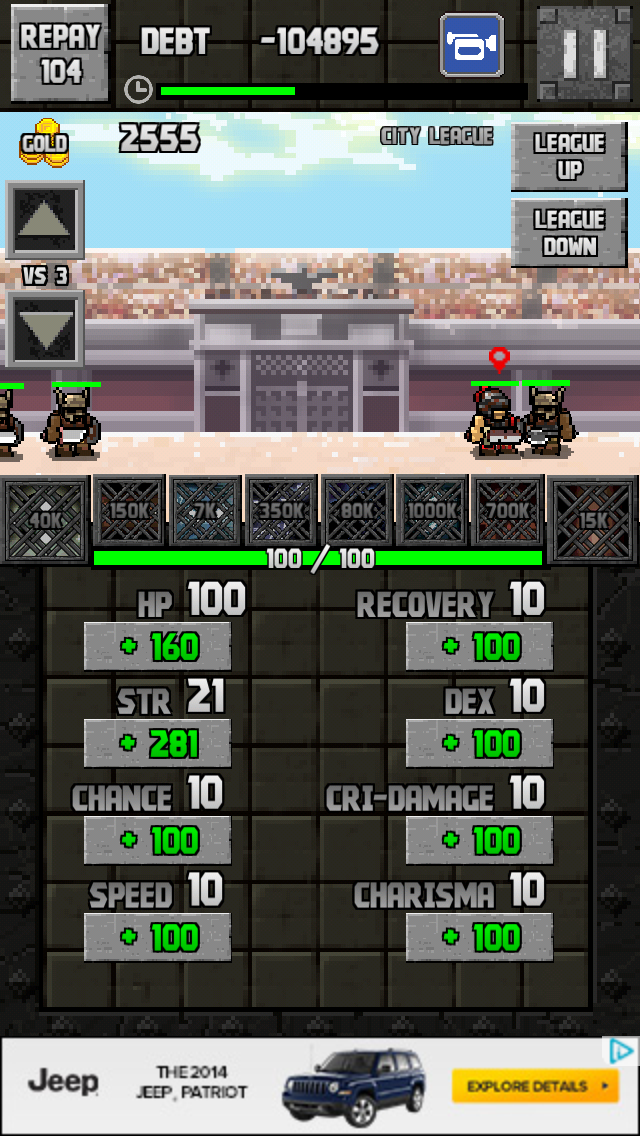 Instead of baking cookies, the premise for Gladiator is a bit more morose. To save yourself from an eternal debt, your character enters the gladiatorial arena and competes for cash. The entire point is to slowly repay how much you owe while battling opponents. You can tap a button to pay at will, let the timer run down to auto-pay, or choose to upgrade your skills to gain more and more combat prowess, to in turn, earn more and more money.

This is where the micro-game comes in. The game’s pace is essentially at your command, allowing you to slowly accumulate wealth by not upgrading, or live on the razor’s edge with constant spending with higher risks and rewards. There are a ton of stats to choose from, and there are no real wrong answers. Charisma will raise your ability to earn more cash, and stats like attack and defense are self explanatory. You basically need to choose what suits your style best.

Combat takes place automatically (you can change the direction of the fighter), but you can spend money to use special abilities if you find yourself in a specific situation, like a cyclone area-of-effect attack if you’re being overrun. Like spending cash on your powers it’s also risky as you may not have enough long-term to take on your enemies. In an interesting twist, the difficulty of said foes can be adjusted at will, adding yet another risk/reward scheme into the mix. 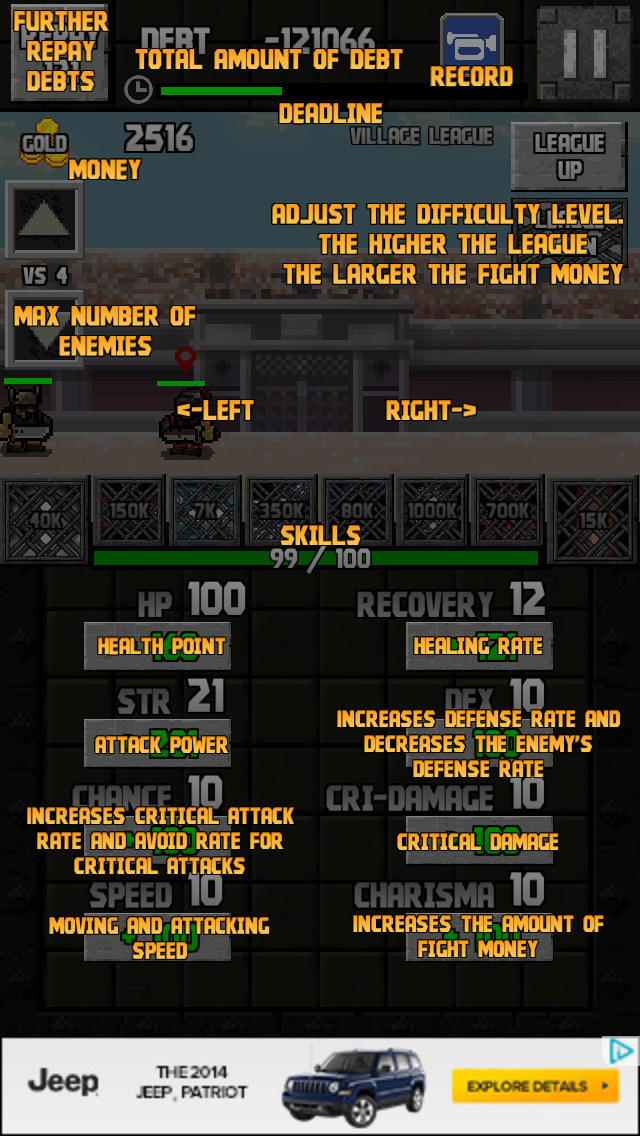 Having said that, I wish there were a few more powers to use that were on a cooldown and didn’t take money to use. As it stands, it’s a bit boring at times when you can’t spend cash to be relegated to essentially doing nothing but waiting to play. With a few more tweaks it could be more action oriented and keep players constantly engaged. The tool tips also aren’t the most descriptive, which can lead to some confusion down the line if you aren’t fully aware of what every stat does (with precise percentages and whatnot).

You can beat it, though few have actually done so. It’s very easy to get wrapped up in tapping upgrades only to find out that you didn’t have enough money left to pay the debt cycle, which raises with interest over time — in which case, it’s game over. There is absolutely no IAP in the game, which is surprising as it could easily accommodate it. In fact, the only attempt to monetize it currently is by way of ads at the bottom of the screen between games.

Poor Gladiator doesn’t have much to it and is slow going at the start, but it’s the perfect game to play for a few minutes at a time while you’re out and about. It will likely appeal to strategy fans who want to take a break from planning grand strategies in more complicated games, which is pretty much all it sets out to do.