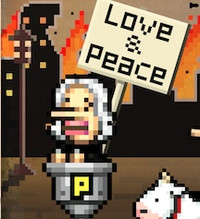 Every once in a while, a game comes out of the Japanese development scene that makes you question your sanity. I feel like I’m pretty numb to this stuff in general by now, but Million Onion Hotel from Onion Games is… something else. Headed up by industry veteran Yoshiro Kimura, who previously worked on No More Heroes, Little King’s Story, and Chulip, the game is basically a variation on Whack-A-Mole. Yet, reducing it to that feels a bit like calling Katamari Damacy a game about rolling a ball around.

The game is based around a hotel belonging to a guy named Dr. Peace. This hotel is famous for its onion soup, and tons of people come to enjoy its delicious flavor. Making all that onion soup takes a lot of onions, and that’s where you come in. You have to pluck onions as quickly as possible. If time runs out before you have enough onions, too bad. If you manage to reach the goal, however, you get to watch a brief, bizarre cutscene taking place in the hotel. The play field is a five by five grid, and onions can pop up anywhere on it. When they appear, you simply tap them to take them before they disappear, but if you miss, you lose some time. When you pull an onion, the square underneath it is highlighted, and if you match a row or a column, you gain some time. As you progress, more difficult onions appear that need to be tapped more than once.

Something strange happens if you manage to complete a row and a column at the same time, however. A bonus mode is activated where onions sprout like crazy, allowing you to rack up tons of points in short order. While this is happening, the gates to madness open in full, with random objects like fish or cows moving across the screen, or some weird asparagus guy popping up, and then there’s the mooing? I’m sorry, I just don’t know how to describe it. It’s weird. It’s very, very weird. That said, after you’ve seen it once, you thirst for it. You want to see it again just to see what else will happen. So you become obsessed with trying to line up that row and column thing again, but the onions just won’t spawn on the point you want them to. Why won’t they peel back their layers and reveal the truth?

I apologize for losing my composure there for a minute. Million Onion Hotel will do that to you. It’s a pretty simple game concept that uses its theme well to keep you coming back. Its bizarre nature is a breath of fresh air, the kind of air we used to take for granted in older days when budgets for video games weren’t so high and taking risks wasn’t so fatal to a developer’s well-being. That’s really one of the things I love the most about the mobile market of today. If a man who really loves onions wants to express that love in a way that resonates only with him, that’s something he can do. I’m definitely looking forward to playing more of this game when it releases later this year, even if it does make my brain hurt.