There are plenty of negative things to be said about Goat Simulator ($2.99). Its controls are difficult to manage, and lead to many awkward camera angles and difficult attempts at navigating. The visuals…are not the peak of 3D modeling. The world is a bit small, and while there’s plenty of nooks and crannies to explore, you can see most of this game in a short amount of time. The game’s general clumsiness makes it difficult to manage the skill-based aspects, and to complete some of the achievements. And the game is generally kinda buggy, with the goat’s head getting stuck and warped in fences, occasionally just falling through the earth, and the odd crash or two. The whole thing is a joke that runs its course not too long after playing it. 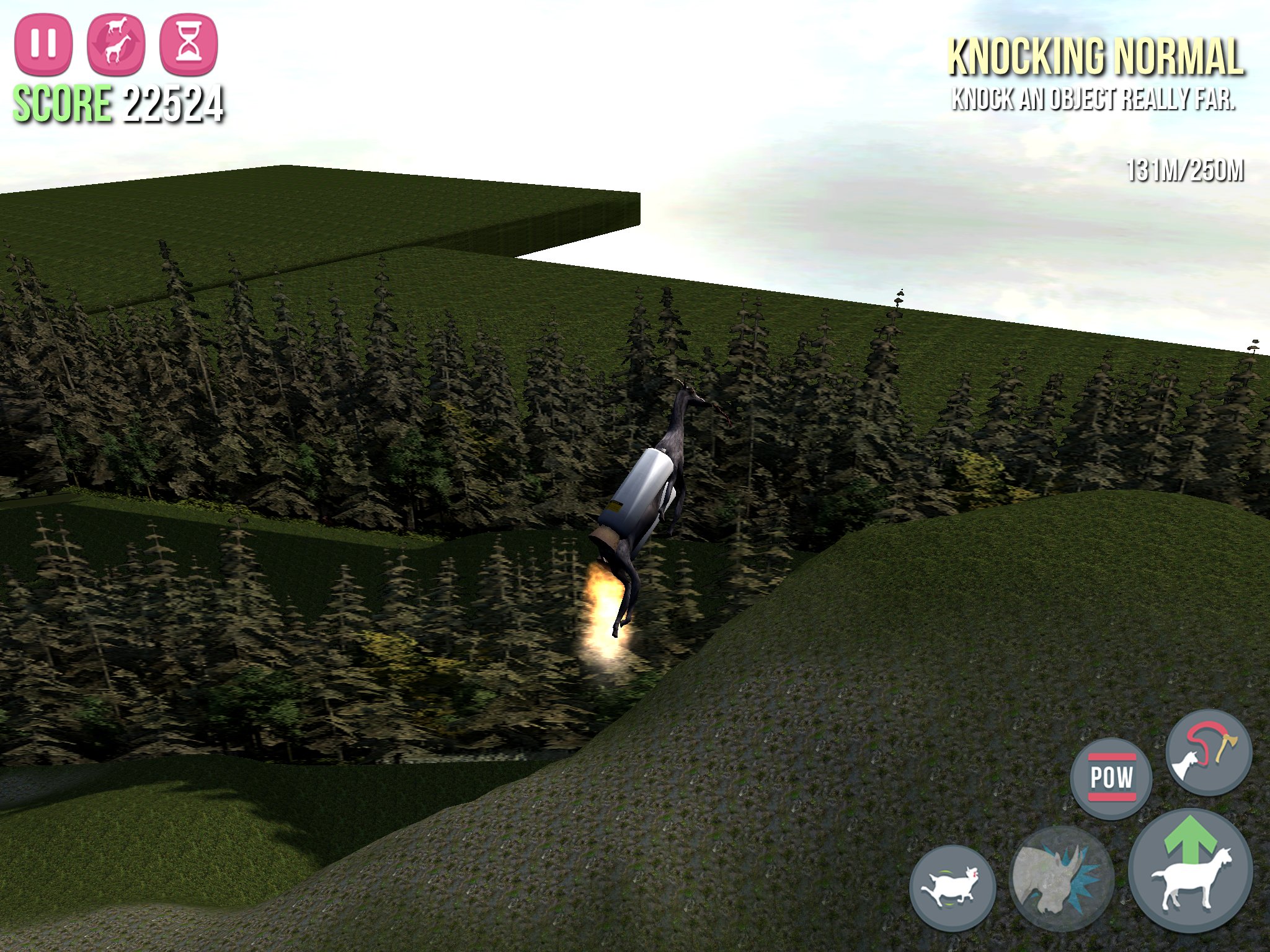 But if any of that’s a problem, then I don’t want to live in your world where you can dare complain about a game where you can headbutt a car, go flying in the air, and almost hit a hang glider flying by. Goat Simulator is dumb fun, but boy is it fun!

The whole thing takes place in a town where there’s plenty of ungulate mayhem to enjoy. Knock over a bunch of rocks called Goathenge? That’s doable! Fight in a ring with another goat? Yes! Strap on a jetpack and attempt to go flying through the air? Why not. The game is just a sandbox of absurdity, as an oddly-powerful and invicible goat roams around, licking and ramming people and objects. And watching all the stupid things that happen is just hilarious. Blowing up a gas station and getting a Michael Bay achievement feels like it should be in every game. The mutators, which include Spider-Goat, the aforementioned jetpack, and several other goats which are…not really goats, not to give away the surprise, are available. 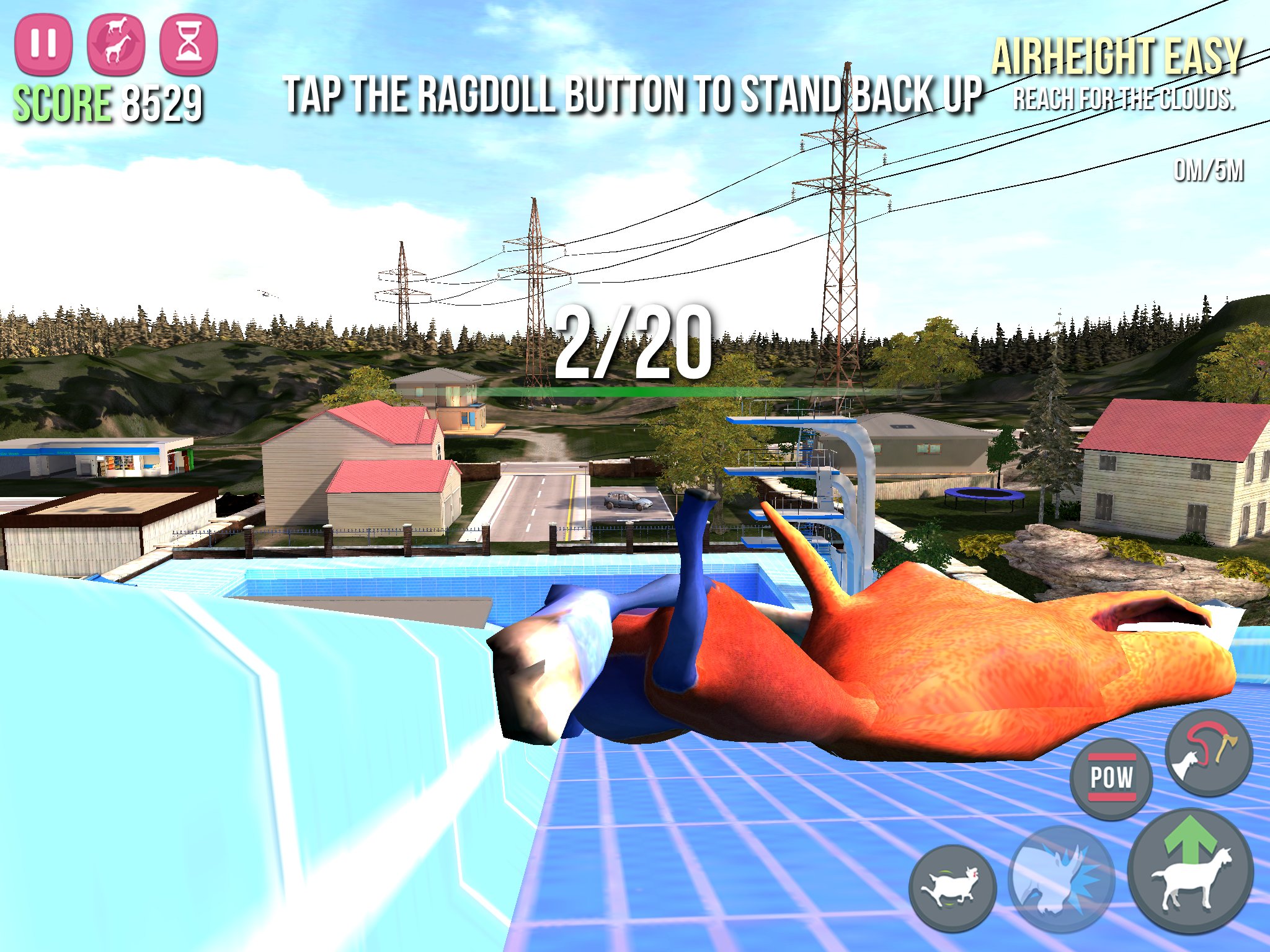 Some of the mutators require collecting golden goat statues hidden throughout the land. That, the achievements, and the scoring done for performing tricks are the only real ‘game’ elements here. Otherwise, it’s just a sandbox to run around and do dumb goat things in. Though in an odd way, it kind of reminds me of playing the Tony Hawk’s Pro Skater games – there was always something enjoyable about finding the hidden parts of the levels, and finding the environmental bonuses to get higher scores. Those are in Goat Simulator as well, but that’s not to say that there’s quite the precision found in THPS at all. Really, the score is there just because. It’s not tracked on the Game Center leaderboards – a hidden minigame is. 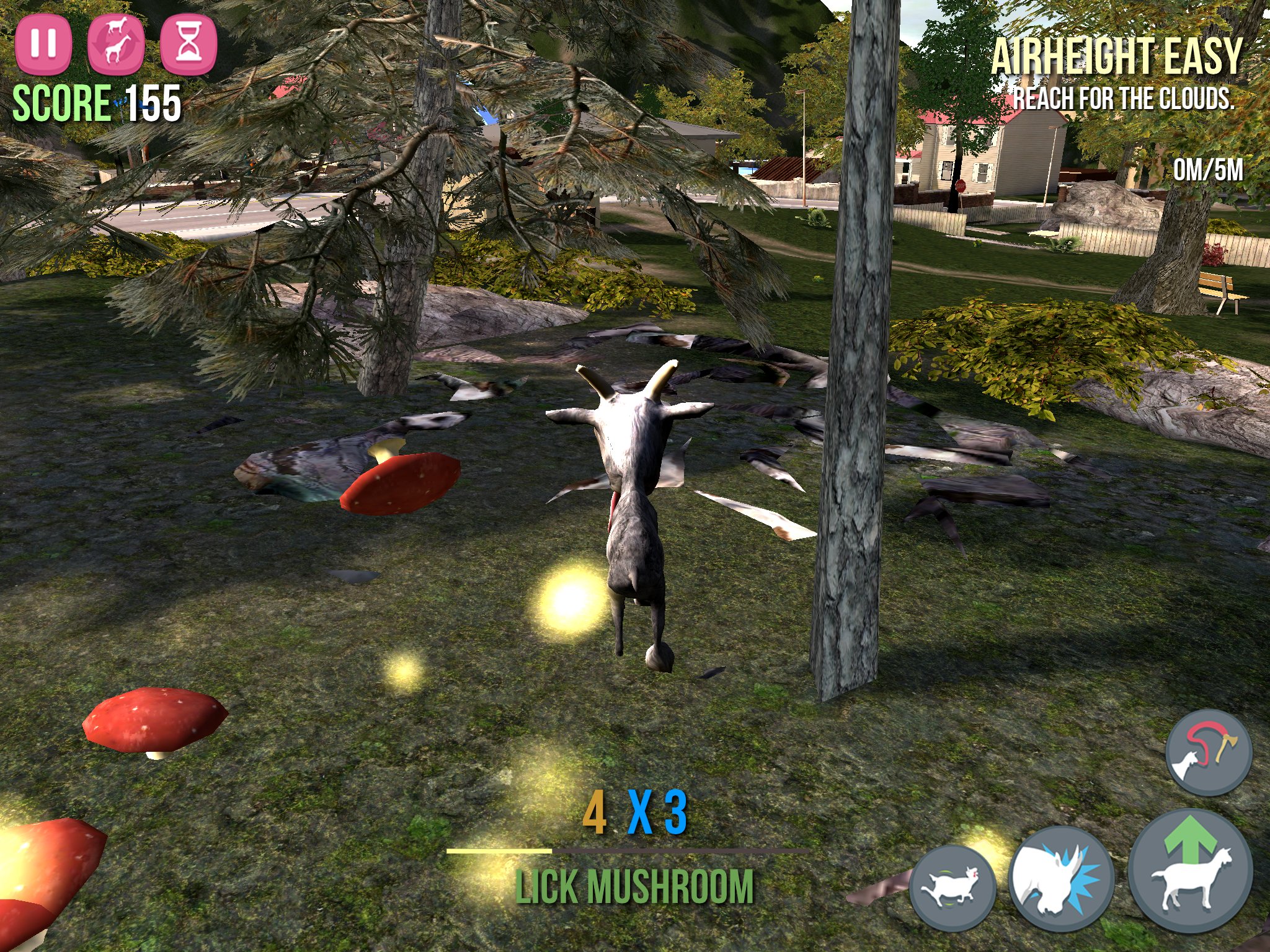 Really, don’t buy Goat Simulator if you want a long-lasting experience, or a fully-formed grand experience, polished off to a T. Really, the game is set up in such a way that anything that goes wrong is pretty much just part of the experience. And most of the fun of the game is trying to control a goat that’s running around wreaking havoc. Either that’s going to appeal to you and you’re going to drop the cash on the game if you haven’t already, or you’re going to pass on it. I’m not quite sure it’s even appropriate to give Goat Simulator a review score, but let’s go with 4 stars. It’s a lot of fun, just without purpose or longevity, but watching goats flying through the air was worth the 5 bucks.